By 7 a.m. legions of folks occupy the Alabama Gulf State Park Pier. Apparently, about half of them know each other. For the pier is more than a very long fishing hole. It is a community.

“It is fishing at the rudimentary level, ” says Spanish

Fort’s David Thornton, Gulf State Park Pier aficionado and webmaster of gulfshorespierfishing.com. “All you need is a means to cast bait.” And for these avid anglers, every day is different for both fishing and fishers.

Many factors come together to create “pier” pressure, including weather, season and mood of fish. Same goes for people. Out here, regulars meld with new personalities, leading Thornton to conclude, “I don’t believe there is another fishing pier atmosphere like this one anywhere.” In other words, this is one special place. 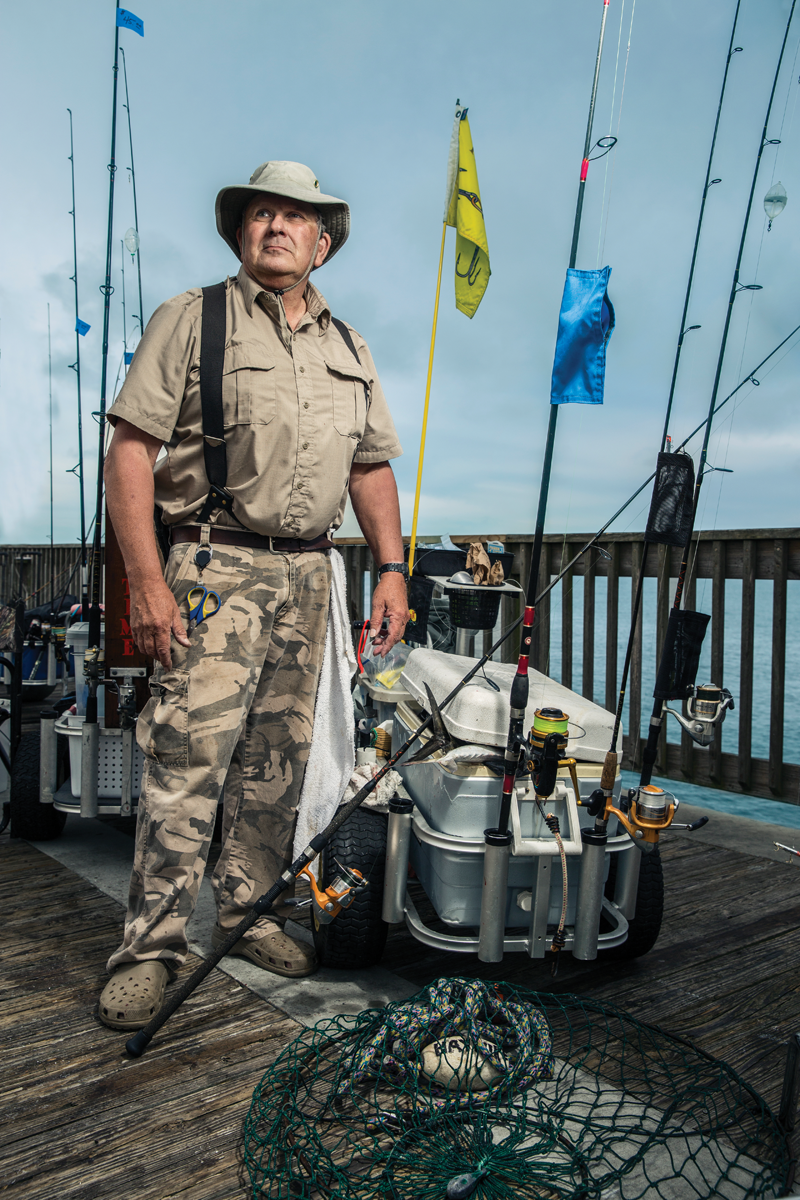 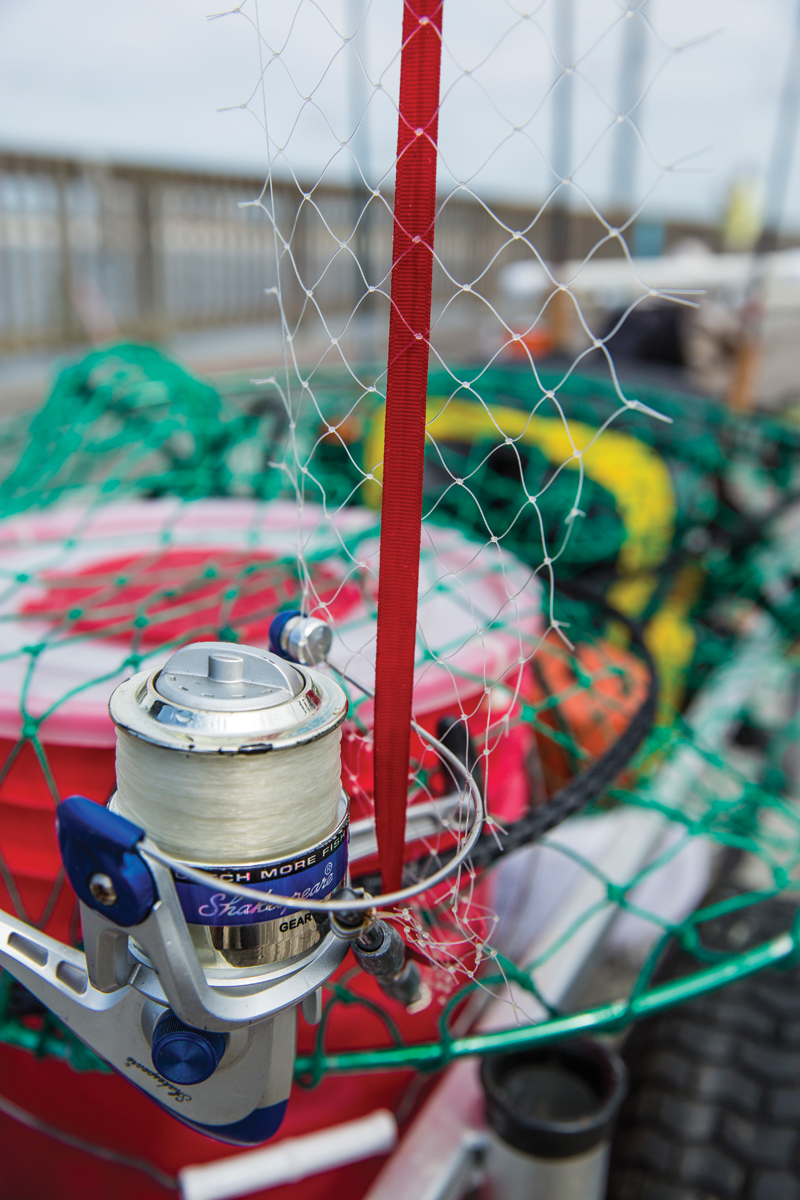 ABOVE George Carleton surveys the pier. His cart is loaded down with a slew of essentials for a day of saltwater fishing at Gulf State Park Pier, including multiple rods, nets, bait and a cooler. 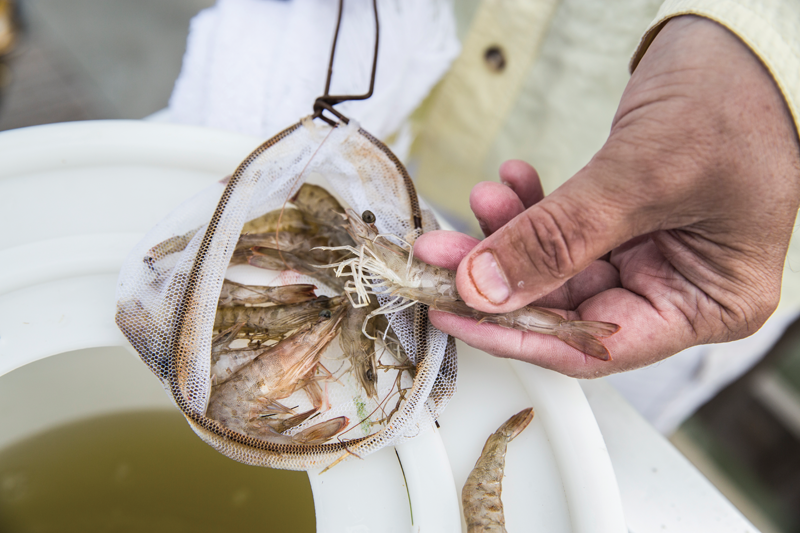 ABOVE The majority of the pier fishermen agree that live shrimp is the best bait.

Time to Get Schooled

There are a few unwritten rules to help newcomers and veterans alike. “Follow your fish. Never cross your line with someone else’s, ” Orange Beach regular, George Carleton, says. “When someone yells, ‘Coming down!’ that means he has a bite and is walking the line down the handrail, so try to move out of the way.” But Carleton, who estimates that he visits the pier about 100 times annually, notes that “coming down” is not shouted as a threat but more of a “heads up” and sometimes even a “help me.”

One must also learn the lay of the land — in this case, a 1, 540-foot concrete swath into the ocean, the second longest pier on the Gulf of Mexico.

“Skinny water” describes the pier’s entrance, where shallow water species are caught. “The Tee, ” or the midsection, is so named because sides tee off the main structure, allowing bait cutting and fish cleaning. “The Octie” area at the end is so called for its octagon shape. Deepwater fish with attitude are reeled in here.

And one must also know Harley Rogers, bottom right. If the pier is a community, Harley is mayor. The Foley resident has fished the pier and its hurricane-clobbered predecessor since the 1970s. He fishes every day except Sundays. He is 90 years old. When asked, “What do you fish for?” Rogers smiles: “Supper.” He drops a sheepshead into an ice chest.

“How did you catch that?”

He answers, “A hook in the lips.” He laughs and opens up. “I love it here — the fishing, the people — and I try to help anyone in need.” Casting a line, Rogers asks to be excused and smiles, “I need to help a guy over here who has no idea what he’s doing.” The other guy, a youngster at age 65, chuckles too, admitting he is less experienced than Rogers, having only fished the pier for 20 years. 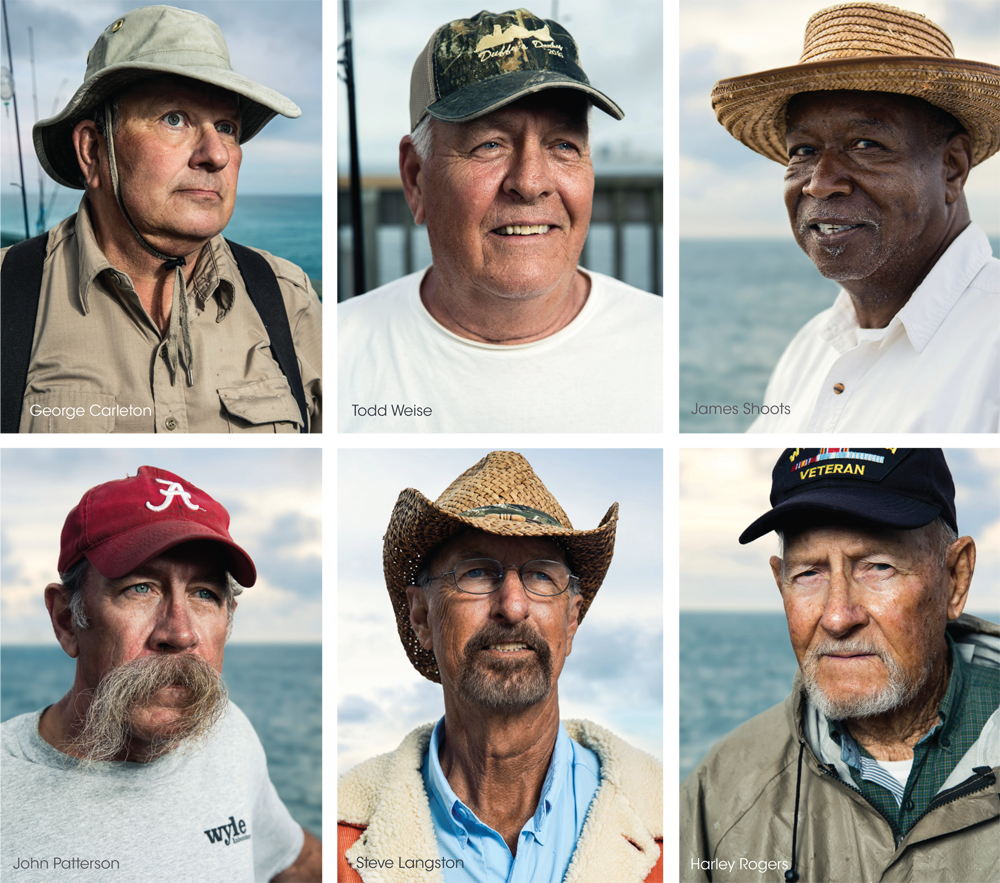 ABOVE George Carleton, Todd Weise, James Shoots, Harley Rogers, Steve “Slim” Langston and John Patterson are just a few of the regulars, retirees who make their second home at the pier reeling in their supper. There is an overwhelming sense of fraternity among these like-minded sportsmen. They are always quick to help one another, as well as newcomers, in the art of angling.

And never say that fish are “swimming.” That’s another sign of an amateur. In Gulf Shores’ pier fisher vernacular, they are “runnin’” (no “g”). For example: “How’s the fishin’, Jim?”

Regardless of skill, experience or vocabulary, all are welcomed. “They just take you in, ” Huntsville’s John Patterson says about his adopted home. “You instantly become one of them.”

Like Patterson, Dale Schell is also from up north, but somewhat further — Ontario, Canada. He winters in Gulf Shores. “Four years ago, I didn’t know Alabama had a coastline, ” the Canadian laughs. “I read an Ottawa newspaper story about your beaches and decided to give it a try. I’d never heard of the pier until I walked on it.” He was instantly hooked, just like the fish he reels in seven days a week for half the year.

“I have never seen anything like these folks, ” Schell adds. “In my four years of visiting here, I have never met a single grumpy person.” 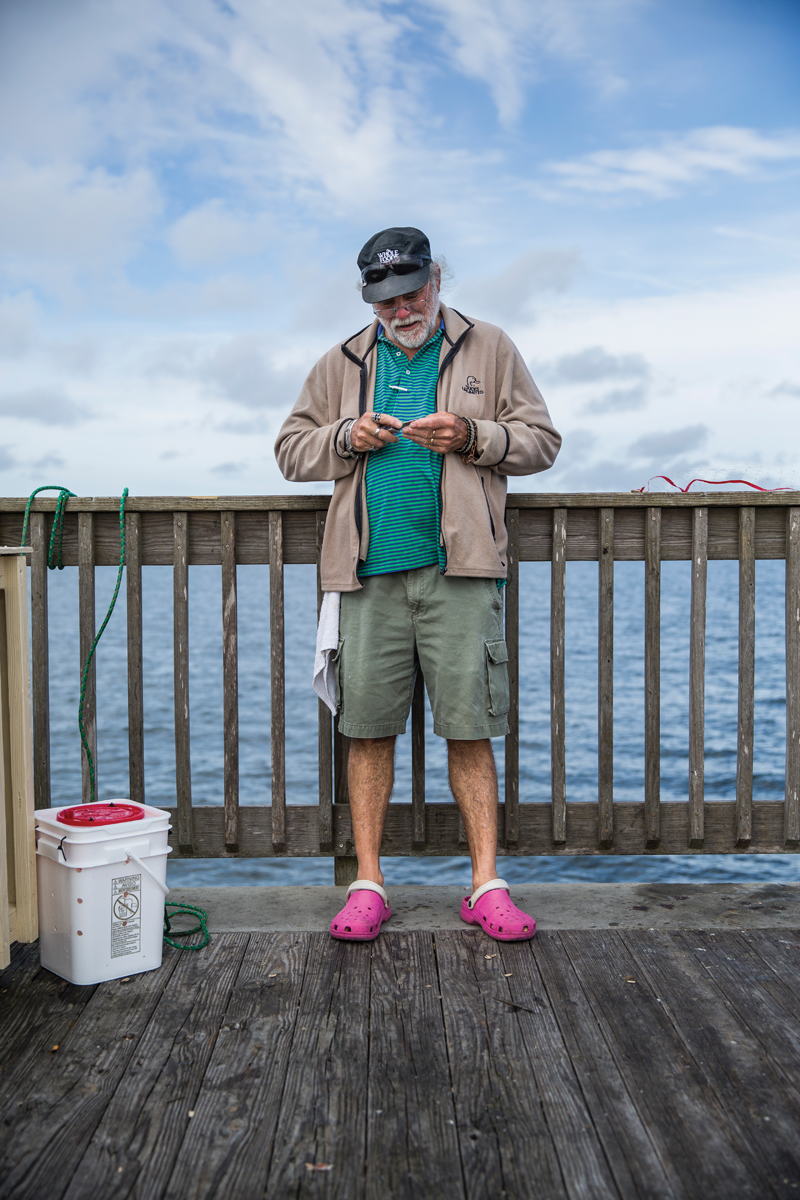 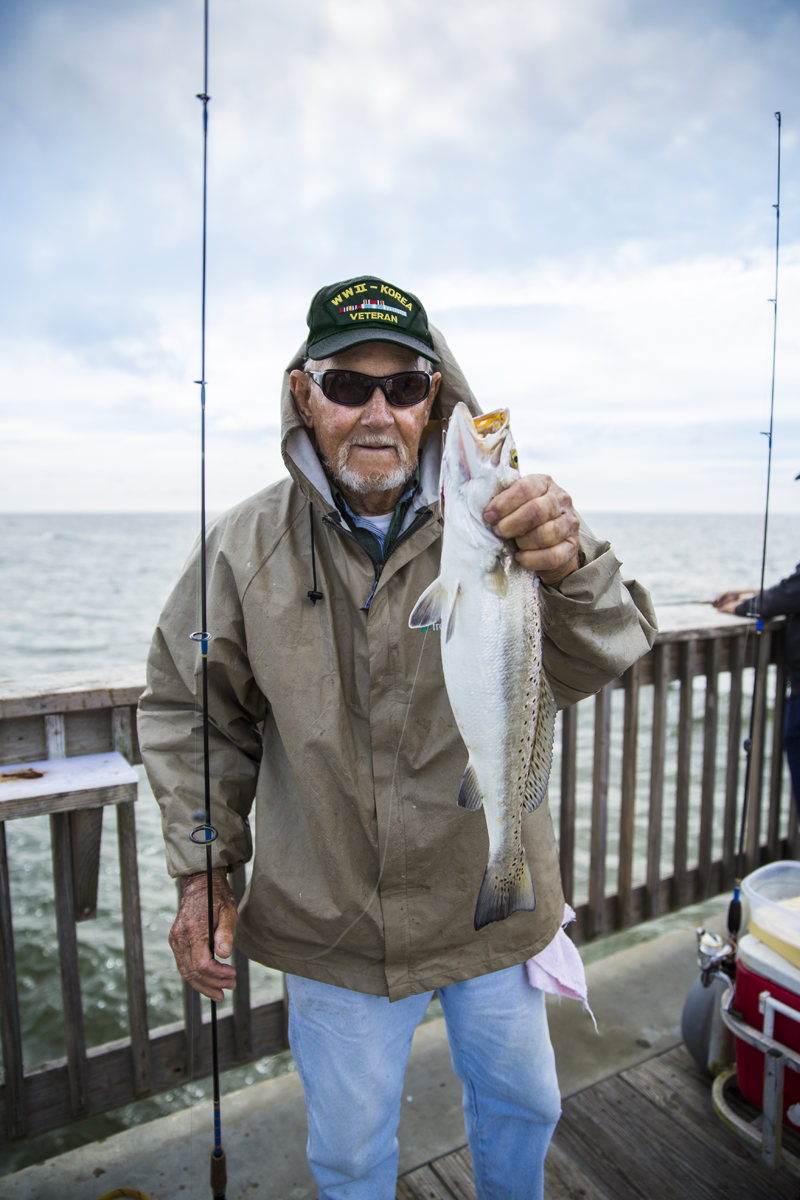 ABOVE LEFT Norm Virciglio prepares a lure for a big one. The pier is open daily from 8 a.m. to 5 p.m. A daily fishing permit costs $9 for adults and $5 for children. (Kids under 11 with a paying adult fish for free.)

ABOVE RIGHT AND BELOW The pier’s unofficial mayor, Harley Rogers, above right, and his son-in-law make the perfect team for reeling and then pulling the catch in with the net. 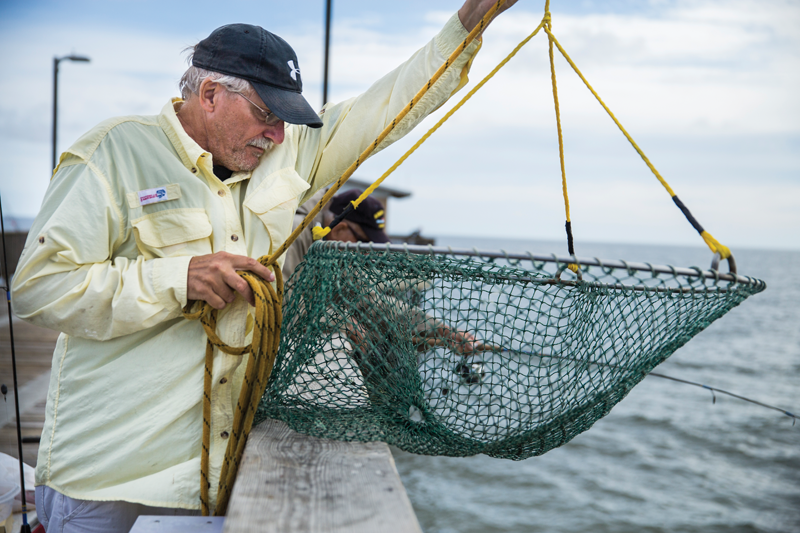 Moving from “the skinny water” to the “Tee, ” the atmosphere shifts. Sportsmen fillet the day’s catch, washing and cleaning the meat. Pelicans walk among humans as if the giant birds were pet poodles. Beneath and beside the pier, sharks swirl. Both sharks and pelicans compete for scraps, but usually the sharks win and, occasionally, enjoy a pelican as a side dish.

“The farther you walk out the pier, the bigger the fish, ” Foley’s Karen Welsh explains. “Sometimes, you can’t reel in fast enough before a shark takes it.” But James Shoots, also of Foley, doesn’t mind. “There is so much variety of fish out here, it is amazing, ” he says. “I fish for all of it: ground mullet, specs, you name it, and I’ll reel it.”

There are other pier favorites, too. Pompano strikes fast and runs faster. Some say it is the best-kept secret on the Gulf Coast — and the best tasting. The king mackerel is perhaps named “king” because pier-goers have caught some measuring 5 feet long and weighing 100 pounds. Spanish mackerel, smaller and usually more abundant than the king, is just as feisty. And finally, there’s the crustacean-loving redfish, dubbed “wise and old” because it can live 20 years.

But in pier hierarchy, the biggest fish lurk in the deepest water at the end of the line. Behold, The Octie.

“This is where the cool people hang out, ” Octie-fisherman Steve “Slim” Langston smiles. “There is more of a sporting element — and we are fine sports, aren’t we guys?” Four men laugh at themselves. The gang is perched around a picnic table at the end of the pier 500 yards out at sea.

The former Arizona resident explains, “Most of us are retired, and I have a choice: sit in an old folk’s home playing pinochle, or come to the pier and fish.” And capturing the seaside camaraderie, Langston summarizes nicely, “I choose the pier.”

Rules of the Dock

1. We are all here for one main purpose: to catch fish. You help me, and I help you.

2. When you claim a spot on the pier, it is yours until you leave the pier.

3. Do not cross another fisherman’s line.

4. Do not allow yourself to be in the way of another fisherman’s line.

5. No profanity, especially around children.

6. Assist beginners, and be respectful. We were all new once.

7. Do not litter or create a mess. The pier is our second home; treat it as such.