During his rookie season with the Green Bay Packers in 1971, Mobilian and former Alabama quarterback Scott Hunter picked up the telephone and heard the familiar gruff voice of Paul “Bear” Bryant.

“At this time, there was a big recruiting fight for Richard Todd, ” Hunter explains. Todd, who played quarterback for Davidson High School, was being recruited heavily by Alabama and Auburn. Knowing that the Packers and the St. Louis Cardinals game would be broadcast in Mobile that particular week, Coach Bryant saw Hunter’s Mobile roots as an opportunity to get an edge.

“Coach Bryant wanted me to call Todd and tell him all about how great Alabama was, ” Hunter says. “Well, we get down to St. Louis, and we practice on Saturday afternoon. I noticed there was a payphone hidden around the corner in the locker room, so I said to myself, ‘Tomorrow after we finish warm-ups before the game starts, I’m gonna be real slick with this.’”

Sure enough, 20 minutes before kickoff, Hunter got Todd on the phone, talked up Alabama and made sure the young recruit would tune in to the impending game. Though the game ended in a 16-16 tie, Hunter felt pretty confident he had scored at least one victory that day in St. Louis. The next day, he called Coach Bryant.

“I was so proud of myself, ” Hunter remembers. “Coach listened as I went through the whole thing about calling Todd between the pregame warm-ups and the kickoff.”

“Hell, ” Coach Bryant grumbled. “I don’t know what you told him, but Todd committed to Auburn last night.”

“Some recruiter I am, ” Hunter says today with a big laugh. (Todd eventually flipped his commitment to Alabama, to Hunter’s great relief.)

It wasn’t the first time Mobile was the setting for a memorable recruiting anecdote, and it certainly won’t be the last. 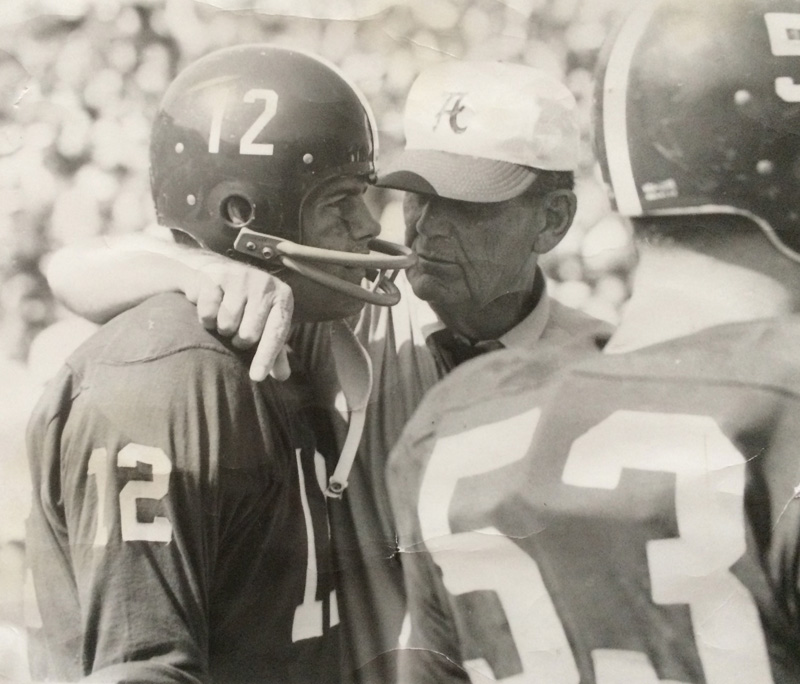 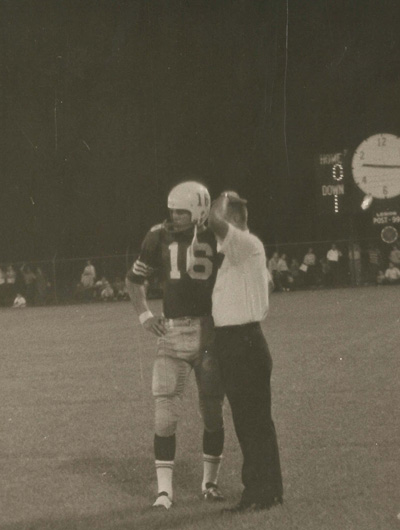 ABOVE RIGHT Scott Hunter and Vigor head coach Glen Yancey in the 1965 opener against Foley.

Like most high-profile recruits in the state, Hunter received attention from the coaching staffs at both Alabama and Auburn.

“I liked Auburn, ” Hunter says. Some of his earliest memories involve riding his bicycle through Auburn, where he had family, and pulling right up to the sidelines during team practices.

“Coach [Shug] Jordan would look down and say, ‘Hey, boys.’” Years later, the legendary Auburn coach would recruit that youngster on the bicycle, but to no avail.

“My mother loved Coach Jordan, ” Hunter says. “She would have committed to Auburn if she could have.”

In those old days, alumni were allowed to take part in a prospect’s recruitment. At the end of one school day during his senior year, Hunter walked out of the Vigor gym only to be greeted by four well known Mobile professionals and Alabama alumni: Judge Ferrill McRae, Oliver Delchamps, Dr. Marion Dodson and Bob Boykin.

The men, dressed in suits and ties, drove Hunter up Highway 43 and began blasting away at squirrels in the fading afternoon light.

“This was in late November, so it was getting dark, ” Hunter says. “Judge Ferrill had his shirtsleeves and the pants of his suit rolled up. I thought, ‘That’s a strange way to hunt.’ You couldn’t even see the squirrels.” The group then took Hunter to dinner before finally dropping him off back home around 8:30 in the evening.

“My mother said, ‘Where have you been? Coach Jordan sat here for two and a half hours waiting to take you to dinner!’”

Jimmy Dill, a receiver at Murphy High School in the class of 1960, remembers the role an alumnus played in his recruitment all too well. Dill was set to make a recruiting visit to Alabama when he was pulled aside by Bill Sharp, a teacher at Murphy and former Alabama teammate of Coach Bryant’s.

“I have a message I want you to pass along to Coach Bryant, ” he told Dill, “and don’t come back to Mobile unless you do. Tell him if he does anything to screw up your recruiting visit, I’ll come up there and whip his ass.”

When Dill found himself in Bryant’s office, sitting across from the large man, he wasn’t sure if he could do it. “I was scared to death, ” Dill says.

Dill took a deep breath, passed along Sharp’s message and waited. “I probably almost fainted.” After a pregnant pause, Bryant leaned forward and said, “Jimbo, let me tell you something. When you go back to Mobile, you tell Sharp if there’s anybody’s ass I can still beat, it’s his.” 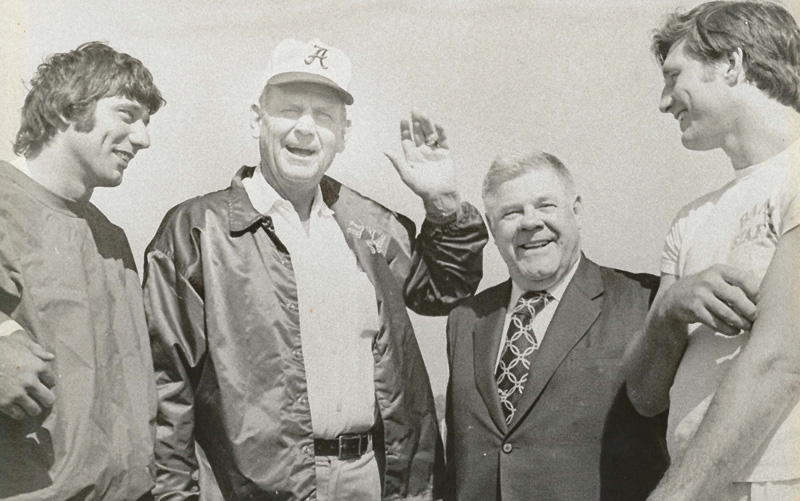 Both Sides of the Coin

Paul Crane stands in the study of his midtown home, gazing at four walls of photographs documenting his two national championship wins at Alabama and his Super Bowl III victory with the New York Jets in 1969. But before the championship rings came the telephone rings.

“I worked at a service station on the Causeway when I was a senior [at Vigor], and I would get calls over there from different colleges and alumni, too, ” Crane says. “My friends would drive by going to the Gulf with their girlfriends, and I’d be pumping gas.”

Crane, who was an All-American center for the Crimson Tide in the mid-1960s, returned to his alma mater to work as a linebackers coach for three years, giving him the rare opportunity to experience the flip side of the recruiting process. Crane’s story about recruiting linebacker Rich Wingo in Indiana is a fine example of how much recruiting has evolved.

“I flew up there, and Wingo came to pick me up at the airport, ” Crane says. Today, the thought of a recruiter from a major program being picked up from the airport by the player he’s recruiting is more than humorous.

“He was driving a little Volkswagen bug, and when I got in it, most of the floorboard was rusted out. We were going down roads covered in ice and snow, and I could see the pavement beneath my feet!”

“I’m not sure what kind of relationship recruiters care about building with a high school coach anymore, ” Curtis says. “So that personal touch has changed.” Social media and technology, he explains, have affected almost everything about the recruiting process.

“There’s no more hiding out a Scott Hunter or guys like that, ” Curtis says, noting that everybody has cell phones these days. But that doesn’t mean Curtis hasn’t seen his fair share of crafty recruiting tactics over the years. While coaching at Murphy in the 1980s, Curtis says he saw schools offer scholarships to four or five players in the hopes of winning the commitment of one of their sought-after teammates.

“Not that [those four or five] weren’t good players, ” Curtis says. But the sudden interest in those guys was enough to raise some eyebrows. 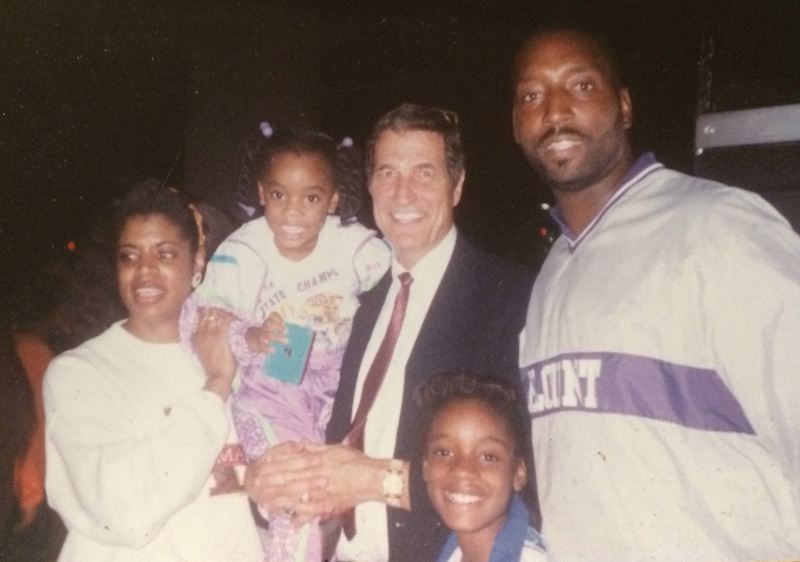 Coach Ben Harris, a member of both the Mobile Sports Hall of Fame and the Alabama High School Sports Hall of Fame, has seen his fair share of recruitments over the years, thanks in part to the impressive stable of athletes he developed during his time at Blount High School. At the end of his first season as Blount’s head coach in 1988, Coach Harris and his squad won the school’s first ever playoff game.

“And never in my wildest dreams did I think we’d win a state championship in three years’ time, ” the now-retired Harris says. The list of players Harris groomed for college football is impressive to say the least: Auburn quarterback Dameyune Craig, Auburn defensive back Larry Casher, Alabama running back Sherman Williams, Tennessee linebacker Willie Bohanan. The list goes on.

“Just the other day, my wife and I were talking about all the calls we used to get from [recruiting] coaches. I used to be so glad when signing day ended.”

Harris says he often found himself caught in the middle, between his players and the coaches recruiting them. When players made unexpected early commitments, Harris says coaches “would call me like I had something to do with it!”

One of Harris’s most successful players was Angelo Wheeler, a defensive end and linebacker at Blount who went on to become a defensive star for the Auburn Tigers.

“I’ll never forget the time my mother came home, and she couldn’t get the mail out because the mailbox was packed with college letters, ” Wheeler says.

“The other thing that sticks out in my mind is when I called my position coach Joe Whitt at Auburn to tell him that I signed. There was ‘recruiting Joe Whitt, ’ and then there was ‘Coach Joe Whitt.’ When I signed my name across that paper, he became mean Joe, ” Wheeler says with a laugh. “It’s amazing how they switch gears when they sign you.”

As for the entire recruitment experience, Wheeler says he “wouldn’t trade that experience for anything in the world.”

“The opportunity to fly on a plane, take these free trips and become exposed to the college atmosphere was just really exciting, ” he says.

Kenny King, former Alabama defensive lineman and Daphne High School’s current athletic director and head football coach, echoes Wheeler’s excitement. “It was a time for me and my family to bond, ” he says. “Ate a lot, ” he says with a big laugh.

The in-home visits with coaches stick out in King’s memory. “I remember [Steve] Spurrier and then Mike Dubose coming to my home, talking to me and trying to get me to come to their schools. It was bizarre, ” King says, looking back. “You see a guy on TV every Saturday, then he’s sitting in your living room trying to convince you to go to his school.”

As a recruit, King attended his first Iron Bowl in 1997, a thrilling game that ended with an Alabama fumble and a game-winning Auburn field goal with 21 seconds remaining. “I saw grown men and women crying in the stands, ” King says of the intense rivalry. “I knew right then I wanted to be a part of something like that.”

But, as former Blount coach Ben Harris will tell you, the best recruiting stories are the ones that come full circle. His great-nephew Enrique Williams, a former linebacker at Blount, was one of the first players to commit to the University of South Alabama in 2009. The coach who recruited him? Former Blount standout and Ben Harris protégé, Dameyune Craig.

“So that was pretty special, ” Harris says.