From the upper Delta to the lower Bay and adjacent Gulf waters, shipwrecks crowd our shores. It’s little wonder, since people have been navigating these waters for hundreds of years in everything from dugout canoes, shallops and caravels to ironclads, shrimp boats and container ships. The Bay may look placid most days, but as any boater will tell you, things can change fast, and abundant nearby shoals spell trouble for storm-tossed craft. Even in calm conditions, captains have to balance omnipresent human fallibility with hazards that include partially submerged logs, shifting currents, dense fog, lightning, inaccurate charts, malfunctioning navigational aids and engine trouble. Add to all of that countless hurricanes and the violent vagaries of numerous wars over three centuries, and it’s easy to understand why shipwrecks are so common.

In fact, a 1983 Mobile Bay cultural resources survey commissioned by the U.S. Army Corps of Engineers documented 282 shipwrecks dating from colonial times to the survey year. Some of the vessels listed were already famous in their own right — none more so than the USS Tecumseh, sunk by a torpedo during the Battle of Mobile Bay. The Tecumseh’s grave is easy to spot. It’s marked by a buoy just off Mobile Point, where the vessel rests upside down in about 40 feet of water, covered by a layer of mud. There are 93 Union dead still aboard her, and the U.S. Coast Guard protects the site against damage or looting. To the south and east, fishermen are well acquainted with the Dixey Bar, a long shoal where big bull redfish like to congregate. Less well known is how the bar got its unusually spelled name. It comes from the clipper ship Robert H. Dixey, wrecked there by an 1860 hurricane. The Dixey’s helpless captain and African-American crew lashed themselves to the rigging while their ship broke apart beneath them, and there they perished. Not far away from these brave sailors’ watery tomb is what’s left of another important wreck, the HMS Hermes, an armed English sloop blown to smithereens during the War of 1812. One of the Hermes’ fearsome guns, known as a carronade, currently guards the entrance to Cannongate condominiums on Spring Hill Avenue. 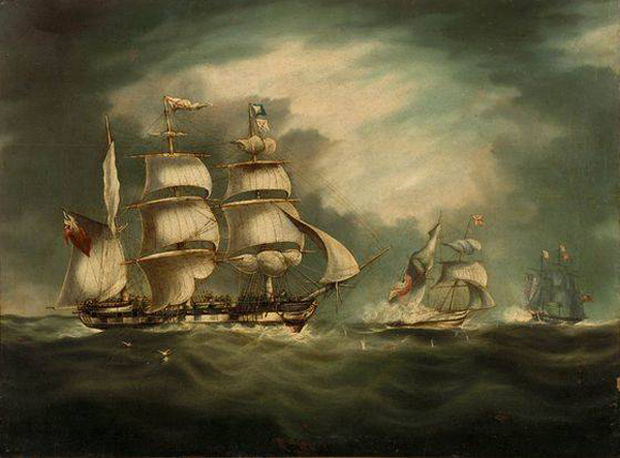 ABOVE A painting by Thomas Buttersworth (1768 – 1842) of the HMS Belle Poule, the Gipsy and the HMS Hermes. The Hermes was a British Royal Navy 20-gun Post Ship destroyed on Mobile Point in 1814.

Some of the Bay’s most intriguing wreck stories date from the colonial period, when Dauphin Island was an important port of call for French, English and Spanish ships. Among the earliest colonial wrecks was the Bellone, a French merchant ship carrying indigo, tobacco, dry pitch and beaver skins that sank on the island’s south side in 1725. Other colonial-era vessels include El Volante, a Spanish fragata de guerra (frigate of war) that ran aground near Sand Island in 1780, and the Brownhall, a 16-gun English ship abandoned nearby the same year.

During the Civil War, Mobile waters were crisscrossed by blockade runners, gunboats, schooners, ironclads and steamboats, many of which came to grief and still lie unsalvaged. Besides the Tecumseh, they include the Cremona, a Confederate stern-wheeler loaded with bricks and scuttled as a channel obstruction; the CSS Gaines, an 863-ton wooden gunboat shot up during the Battle of Mobile Bay and abandoned by her crew near Fort Morgan; the CSS Huntsville and CSS Tuscaloosa, a pair of clumsy ironclads used as floating batteries and scuttled in the Mobile River at the head of Blakeley Island; the Ivanhoe, a blockade runner lost two miles east of Fort Morgan; and the USS Philippi, a Union side-wheel gunboat sunk and burned on shoals at the Bay mouth. Perhaps the most sought-after but as yet undiscovered Civil War wreck is that of the Pioneer II (also known as the American Diver), a 36-foot Confederate submarine that was a forerunner to the Hunley. The Pioneer II sank somewhere near Mobile Point while being towed through choppy water. Her crew escaped, but the vessel was never recovered. 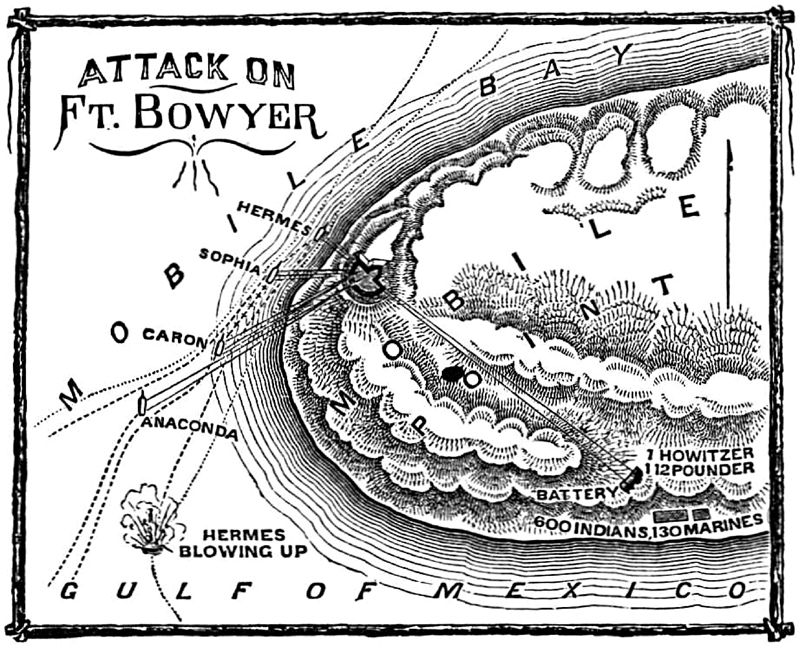 ABOVE A map of the assault on Fort Bowyer, near present day Fort Morgan, showing where the Hermes ran aground and was subsequently destroyed to prevent it from falling into American hands. Lossing, Benson (1868). The Pictorial Field-Book of the War of 1812.

The adventure novelist Clive Cussler, who discovered the Hunley off Charleston Harbor in 2000, wanted to hunt the Pioneer II as well, but the State of Alabama denied him a permit. If the diminutive submarine boat is ever pinpointed and raised, it promises to be one of the most significant and exciting episodes in Southeastern maritime archaeology.

Seasoned maritime archaeologists agree that area shipwrecks aren’t hard to find; they’re just about everywhere, in fact. Rather, properly identifying them is the challenge. That’s been the overriding difficulty for those seeking the slave ship Clotilda, which was sunk and burned somewhere north of Downtown Mobile. Local lore claims that the Clotilda’s ribbing was visible at low tide during the early 20th century, but even if found, accurately distinguishing the schooner’s charred and water-logged old timbers in an area littered with sunken barges, flatboats, steamboats, rafts and skiffs, many no doubt evidencing similar construction methods, will be daunting. Nonetheless, something of the Clotilda is still out there, waiting. Its discovery and identification would be an international story. 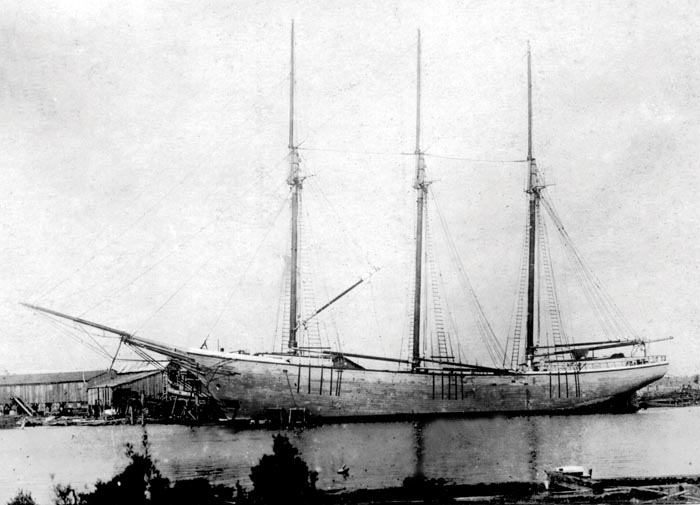 ABOVE The Rachel was an early 20th-century lumber schooner that was swept ashore near Fort Morgan in a hurricane on the return trip from Cuba.

Happily, one doesn’t have to be an archaeologist or dedicated researcher to appreciate the romance of Mobile Bay’s shipwrecks. Several are easily visible to everyday passersby, or are within memory of living witnesses, and never fail to elicit interest. Foremost among these is the weathered skeleton of the Rachel, located on the beach near Fort Morgan where it is periodically uncovered by storms. Frequently mistaken for either a blockade runner or a rum runner, the Rachel was rather an early 20th-century lumber schooner shoved ashore by an October gale, where she was abandoned and eventually burned. Farther to the north, at the head of Mobile Bay beside the Causeway, sits the ruined keel of the Chiquimula, an early 20th-century lumber schooner once owned by Jimmy Buffett’s grandfather. The Chiquimula was towed during the 1950s into Blakeley River, where investors planned to convert her into a restaurant until some reprobate set her afire. Older citizens still recall the anachronistic sight of her battered hull and masts, and even now at low tide her timbers may be glimpsed.

The sea is a harsh mistress, it’s been said, and she jealously guards her secrets. But for those who frequent our beautiful shorelines, tantalizing physical remains of past shipwrecks are visible, and when even those are gone, there will still be the stories.