Few among us have “king-maker” on our resume. Bill Yeager didn’t either. But he could have.

A south Alabama ad man and political adviser from the late 1950s to 2006, his clients included a governor, congressmen, mayors, judges, city councilmen — the mighty and the soon to be. All had a common denominator: Their odds of winning elections greatly increased with Yeager on speed dial.

He was a shaper of political fortunes, home by 6 p.m. for dinner. He spent Sundays in church and was a friend so revered that several of this story’s sources fought back tears during interviews.

William “Bill” N. Yeager, Jr., graduated from the University of Alabama with a journalism degree, intending to become a top-notch sports writer. But he also wanted to earn money. Which meant he couldn’t be a sports writer.

In the 1950s, he joined the Mobile advertising firm of Morris Timbes, which later became Timbes & Yeager Inc. after Bill ascended to company president.

Along with long-term commercial accounts such as Joe Bullard Olds and others, he gradually migrated to working with political candidates and campaigns. “I don’t think Bill realized how good he was, ” former co-worker Shirley Dean says. “He could put his finger on the pulse of Mobile. He just had a knack for it. He could see things.”

Yeager demanded undivided attention. “Before taking you as a client, he would take you behind closed doors and say, ‘Tell me everything I need to know about you, ’” recalls Dean. “He had to believe in you 100 percent or he would not represent you.” He commanded his clients, “Don’t listen to what everybody tells you. Listen to me.” And they did.

Clients explain that Yeager did not learn the art of politics from a book; he wrote the book. He had little need for focus groups because he was one himself.

“Dad was brutally honest; he had no filter, ” said Yeager’s daughter Sherry Yeager Hall. “He told you exactly how it was.” When gubernatorial candidate Bob Riley came to town, Yeager was quick on the draw. “Let me tell you what to do the next time you drive down here, ” he told the future governor. “Get rid of that Mercedes and drive a pickup truck!”

Former Mobile mayor Mike Dow explains, “You had two choices in running for public office. You listened to Bill Yeager and won, or you thought you knew more than he did and lost.” The four-term mayor smiles. “I listened.” 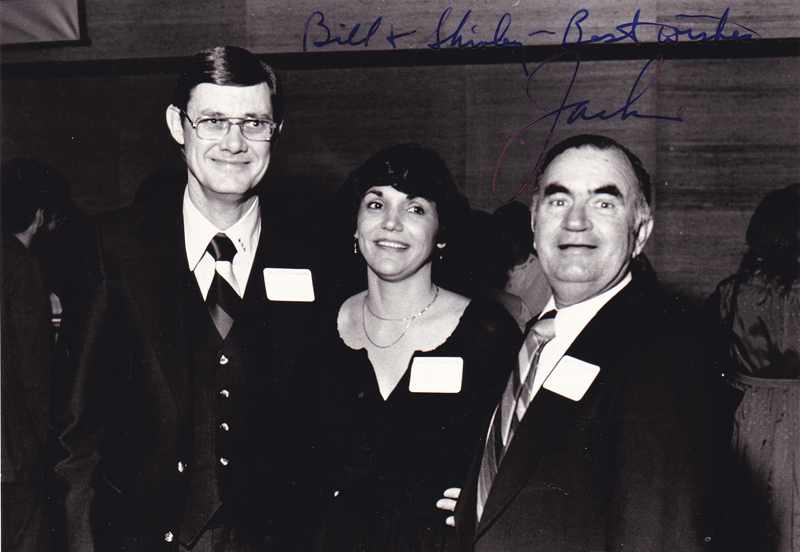 Former U.S. Rep. Jack Edwards listened, too. “Bill was tough as nails, ” he recalls. “Yeager told you what he thought, but he was open to what you had to say. I remember a campaign statement he wanted me to say. I argued, ‘Bill, I just can’t say that. It’s not me.’ We clashed sometimes but always reached a compromise.”

Former U.S. Rep. Jo Bonner’s recollections are vivid. “Without a doubt, Yeager was a genius in advertising and public relations politics, ” he says. “His word was more than a recommendation; it was taken as gospel.”

Frank McRight remembers a classic TV spot that may have cost him the election in a memorable race against Yeager.

In 1984, the young Democrat challenged Republican Sonny Callahan for U.S. Congress House District 1. His ad man was Robert Squires, the nationally famous and undefeated Democratic strategist from Louisiana. The race was heated, tight and hard-fought. “I remember watching TV local news, ” recalls McRight. “The race was going well.” And then Ronald Reagan came on TV.

In a locally aired commercial, the president of the United States implored south Alabama: I need Sonny Callahan to help me in Washington. Can I count on your vote?

“Apparently, Bill got President Reagan to make a commercial for Callahan, ” McRight remembers with awe. Viewing the TV spot, someone patted the challenger’s shoulder and said, “That was the winning campaign message.” (McRight’s campaign also had to absorb the visit to Mobile by U.S. Sen. Ted Kennedy, inexplicably invited by other local Democratic bigwigs to come down and rally the faithful. Most Democrats who could, such as U.S. Sen. Howell Heflin, scurried to other parts of the state, regretting that their “schedules” required them to be elsewhere.)

“But I’ll say this about Bill, ” adds McRight, who is now a Birmingham attorney, “Yeager was truthful. Now at times he would spin the truth in ways I wish he hadn’t, but that’s politics. He was a fighter, yet still a good man.”

Perhaps the most memorable campaign was Sonny Callahan’s legendary “You Don’t Know Me” commercial. When it ended, not only did Alabama know Sonny, but so did the whole country.

In 1982, Callahan faced an uphill battle for lieutenant governor against Bill Baxley. Yeager created a simulation of American Express’s TV commercial in which famous yet unrecognizable people held an Amex Card to the screen and said, “You don’t know me.” Sonny’s commercial did the same thing, until American Express found out about it.

The credit card company demanded that the commercial stop running or legal action would follow. “Okay, ” answered Yeager, but not before holding a press conference, outraged because a New York conglomerate was bullying Alabamians. Callahan’s camp announced with indignation that it was forced to withdraw the ad, although they stated they had planned to pull the ad anyway in order to save money.

The commercial made national headlines, including a segment on the Today Show. It did not cost one dime.

In 1988, a 41-year-old businessman with no political experience and little name recognition approached Yeager, asking for help in running for city council. “No, forget city council. You need to run for mayor, ” Yeager told Mike Dow.

“We met for dinner. I planned to interview him about running my campaign, ” Dow says. “That quickly turned around. He interviewed me.”

The Dow-Yeager campaign included an all-out billboard assault, 25 years before Alexander Shunnarah. “He installed signs all over town with the message, ‘I Like Mike, ’” recalls Dow. “And that’s all it said.”

Mobile was abuzz. “Who’s Mike? Who likes Mike? Should I like Mike?” By the time Dow announced his candidacy, “Mike” was an old friend you had never met. And Mike notes, “I would not have been mayor if not for Bill.”

Yeager’s placards were a frequent tool. In 1980, strategically placed billboards throughout Mobile County teased one word: “Guilty.” A month later, the message read, “Guilty. Chris Galanos Puts Criminals Behind Bars.” “The man knew his stuff, ” former four-term Mobile District Attorney Chris Galanos says. “But he not only gave his talents, he gave his heart.” 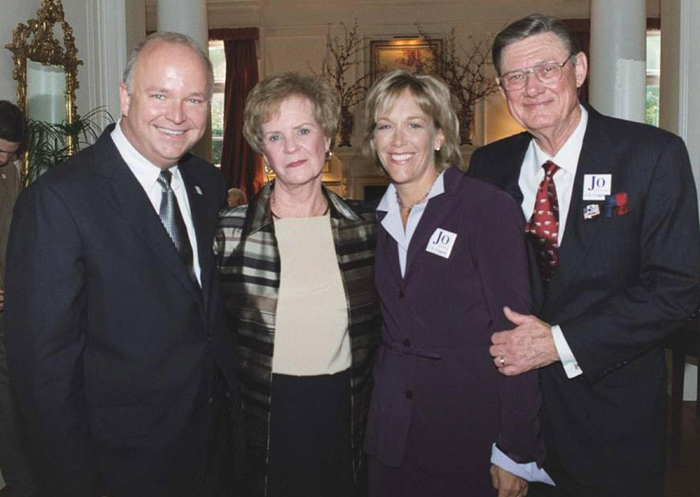 ABOVE From left to right, Congressman Jo Bonner, Betty Yeager, Janée Bonner and Bill Yeager at a campaign event in October 2002.

Clients say without hesitation that once Yeager was in your corner, you also had a friend for life. “People loved him because they knew he believed in them, ” Jack Edwards states. “He was just a great guy.” He was also a devout jogger, which ironically, is how he died.

Ten years ago, Bill Yeager, a young 75-year-old in perfect health, was taking his morning neighborhood jog when an automobile struck him. The tragedy was ruled an accident.

Friends, clients, the mighty and the meek gathered in hospital waiting rooms for several days before Yeager died on August 17, 2006.

U.S. Rep. Jo Bonner delivered Yeager’s eulogy before the U.S. Congress. Quoting writer Chip Drago, the congressman listed many attributes of his friend: the tall, thin man with eyeglasses, sports coat and tie, always content to be on the fringe of a crowd. Clients were the focus, not Bill.

Currently in Bonner’s office is a framed photo of him and Bill, embracing after winning a campaign together. Gazing at the picture while being interviewed, he spoke of Yeager’s legacy. “If there’s a hall of fame in heaven for PR and advertising genius, Bill is chairman of the board.” Click here to view a complete list of political clients

MB’s publisher Jocko Potts was lucky to be hired at Timbes & Yeager fresh out of college and worked eight years under Yeager’s wing, while getting an education much more valuable than his college degree. He thinks of Bill often and considers him a second father.