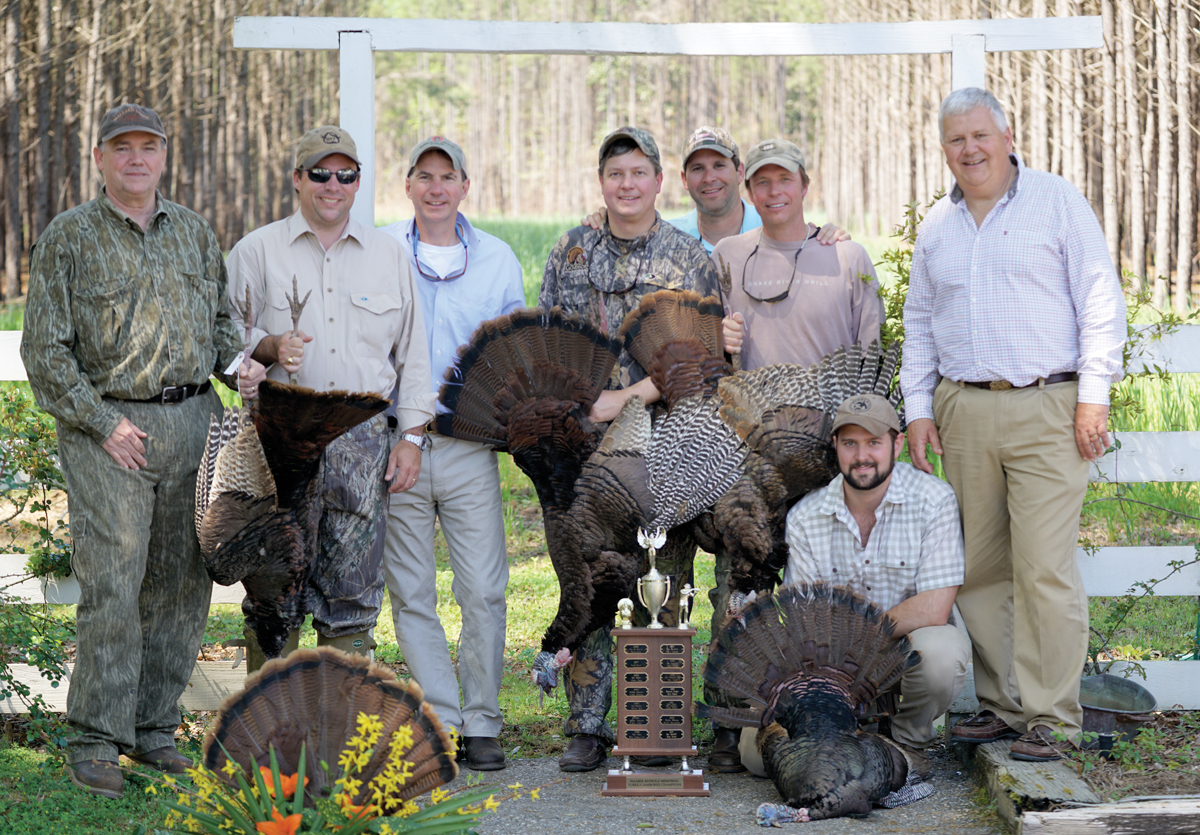 ABOVE Dr. Albert Haas organized the first Jamboree in 1999, a knock-off of his friend Walter Tutt’s version of the competition. It was later named the Palmer Bedsole Turkey Jamboree, following the passing of the former winner and expert tale-teller. “I may have started it, but the Morrissettes carried the day for years. Then Whitney Bank and Tommy Weller helped keep it going, ” Haas says. “Ma’an Adams, Jeff (Weston) and Warren (Butler) do all the heavy lifting now.” Left to right: Bo Cross, Angus Cooper, Warren Butler, Palmer Whiting, Frank Lott, Jeff Weston, Russell Dickson and Paul Dickson.

The thing about turkey hunting is you never return from the woods completely empty-handed. Birdless, sure, but always carrying a tale of the hunt, however embellished.

One group of Mobilians has turned this storytelling aspect into the main event of an annual turkey hunt, the Palmer Bedsole Turkey Jamboree. For the last 17 springs, these hunters have gathered in the southern Alabama woods for a friendly competition to see who can bag the top gobbler. The rules, simple and loosely enforced, are set forth by one of the Jamboree’s emcees and organizers, Dr. Albert Haas:

1. Hunters must not use decoys or bait (“Corn is not bait; it’s survival!” claims one hunter).
2. Hunters must have their gobblers to the judges by 11 a.m. sharp.
3. Hunters must hunt in pairs and stay together.
4. Hunters will receive no special dispensation (except for hunter/caterer Clifton Morrissette, who has been charged with providing food for the weekend, which includes fried shrimp, West Indies salad,  Conecuh sausage, crawfish and lamb chops).

Judges decide the winners using a complex formula that considers the turkey’s weight, spur length and beard length. Once the birds are measured, each team gives the group a recap of their hunt. Heckling, accusations, name-calling and laughter ensue.

One of the more formidable teams, comprised of Jeff Weston and Warren Butler, has been hunting the Jamboree together for over 10 years and, according to their own records, has come in second every year. “Weston and Butler are both in excellent shape, so they can get around well, ” says John Hardin, one of this year’s judges. “And they have access to some of the best land. They always seem to place or show.” In a year in which the Cubs would win the World Series, was it possible that Weston and Butler would finally get over the hump? Their tale:

Jeff Weston: Earlier this week, Albert Haas and I went down to this property with a big, giant ravine divided by a creek. I was on one side, and Albert was on the other. Turkeys on his side started gobbling. I patiently wait for mine to gobble, like 45 seconds. Nothing. So I haul ass to Albert’s area and jump up in there. I end up with two birds at 50 yards gobbling and strutting and two at 75 yards gobbling and strutting. I’m looking at all four of ’em. Safety’s off, but I never got a clear shot. I told Butler this’d probably be a good place to start this morning.

Warren Butler: It was a mile or more of miserable walking to get to the spot where we thought they were. So this morning, we trek our ass all the way in there and sit our ass down, and man, it’s perfect. It’s quiet.

It’s gobblin’ time, and we don’t hear a thing. And so I’m all pissed off at him for making me go. I said, “Man, this is what you get for poaching on Albert. This is the turkey gods messing with us.” I said, “We’re screwed.” And as we’re going back to the truck, I kid you not…

Weston: He bitches at me a lot…

Butler: Oh, I’m chewin’ his ass from the get-go for screwing me on the Jamboree. So we’re going back to the truck, and I see the freshest turkey tracks I’ve ever seen in my life.

Weston: Because it rained yesterday.

Butler: So I just stopped walking, but he kept going to the truck. We’re not even talking by now, we’re so mad at each other. I call, and the turkey gobbles directly over the hill. I immediately stop and set up. Well you know jackass Weston. He just runs around in front of me. And he sits down and says, “Go ahead, start calling.”

I call but get nothing. So I’m like, “You spooked him!” and now we’re not talking again. So we get back in the truck, and we haul ass.

When the weather warms from winter to spring, the toms will chase hens like sailors on leave in Rio. The gobblers gobble to let the girls know where they are and to establish territory. They strut, wings lowered to the ground and tail feathers fanned out. Chicks dig plumage.

The birds will roost in trees, their gobbles carrying over a mile. The challenge for the hunter is to figure out where the turkey roosts, then get within shotgun range of where he thinks they’re going to fly down, if he can make a call that the tom believes more than a natural hen.

Weston: My son Fuller and I had hunted another turkey a couple of weeks ago, so we decided to go back to that spot.

Butler: We get there and make a call at this little green field, and this turkey answers us way down in the bottom. And man, it’s a perfect burn. They’d just pushed out the burn lanes, so we run down this thing, and we hit this creek. So I pulled out my box call and I hit that thing, and that gobbler answers us straight across the bottom. Weston says, “We gotta get across this stream.” We jump across the creek and he says, “You go that way, I’m going this way.” I take two steps before I realize,  Wait, I’m going away from the damn bird. He darts forward about 35 yards, and he sits down. And I’m thinking,  What the hell?

Weston: Hold on now, I’ve watched him miss seven turkeys in the last three years. Seven turkeys! So I go far away — he couldn’t shoot over your shoulder.

Butler: I’m up the hill, looking down. Jeff is directly between me and the turkey. I call one more time, and the bird answers. He’s a lot closer and I’m thinking,  We’re in the game. I’m up on the hill looking down at Jeff and this beautiful creek bottom. Next thing I know, it gets quiet, and I see this white spark jump across the creek. I was like, “Damn, was that the turkey’s head?” It was the whitest turkey I’ve ever seen. I wasn’t quite sure it was a turkey it was so white.

Weston: If you think it was white for him, that gobbler was 21 steps away when he jumped across the creek from me. Unbelievable.

Butler: So he jumps across the creek, and I’m looking down. And all of a sudden, I see Jeff tense up. I see that white head coming. Jeff shoots and it folds him, and we run up there. I’m like, “Jesus, man, he jumped the creek!” And he says, “Great calling man, great calling!”

Weston: Did I mention that I’ve seen him miss seven turkeys in the last three years? 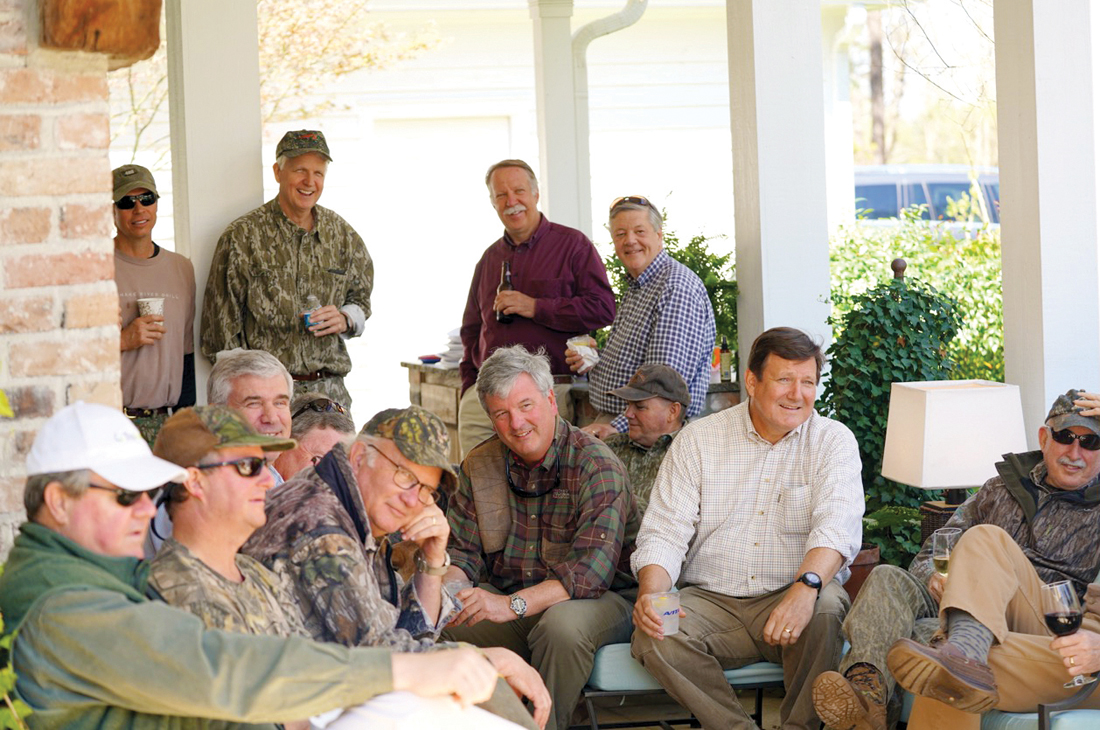 ABOVE The hunters gather together for old-fashioned truth-stretching stories of the weekend’s gobbler encounters.

On Saturday morning, the hunters trickled into the back of Agee Broughton’s historic home, built in 1835 in Claiborne, just off the Alabama River. At a quarter to 11, Weston and Butler could taste first place, as only three toms had been turned in. Their white bird, by everyone’s estimation, was the one to beat.

At 10:56, Angus Cooper ambled up carrying a large bird. Hunters gathered around, admiring its remarkably long spurs and thick, coarse beard. Some whipped out phones to snap pictures.

As it turned out, Cooper, teammate Bo Cross and their communications assistant(s) — a focal point of the crowd’s raillery — spent the morning bantering with a group of eight turkeys. Bo’s yelps drew the birds in, and Cooper made the shot, effectively ending Weston and Butler’s chances for the trophy.

It’s just as well, though. “If they ever did bring in the biggest bird, ” Haas laughs, “we’d just make up a rule so we could disqualify them right there on the spot.”

text and photos by Stephen Potts