Leah and Chris Pfeiffer can cook up a fabulous feast for friends PDQ. For most folks, PDQ means “pretty darn quick.” For these young, energetic owners of PDQ, a fresh eatery on University Boulevard, it also stands for “People Dedicated to Quality.” When it comes to entertaining at home, as the Pfeiffers often do, it likely stands for both — although away from work their style is a little more leisurely.

“We like to say that I wear my chef jacket at the restaurant, and Leah wears hers at the house, ” Chris says. “Although, I typically handle the outdoor cooking.” Interestingly enough, while Chris, a native Mobilian, heads up the helm at PDQ, it is Leah who came to the marriage with the culinary credentials. After graduating from the University of Alabama (where the pair met), Leah attended the French Culinary Institute in New York City. Chris says that prior to PDQ, his kitchen experience came mostly from summer jobs shucking oysters at the Original Oyster House and working as the visiting clubhouse manager for the Mobile BayBears.

A role reversal occurred when the two started a family. “Leah and I pondered several ideas involving her culinary talents. However, we felt it would be best for our children to have her around full time. I put my restaurant hat on shortly after, ” Chris says. The couple has two daughters, Ava, 4, and Poppy, 16 months, and baby number three is due in August. Naturally, adding kids to the equation created a shift in the way Leah and Chris entertain.

“Now, our weekends entail having our friends and their children over to our house to watch football games or cook out, ” says Leah. Even with their hectic schedules, they host friends or family a couple of times a month.

“We just moved the party from other social venues to our house, ” adds Chris.

Here, the couple shares one of their favorite strategies for treating guests to great food and fun. The mouthwatering and approachable menu is sure to leave any crowd smiling. 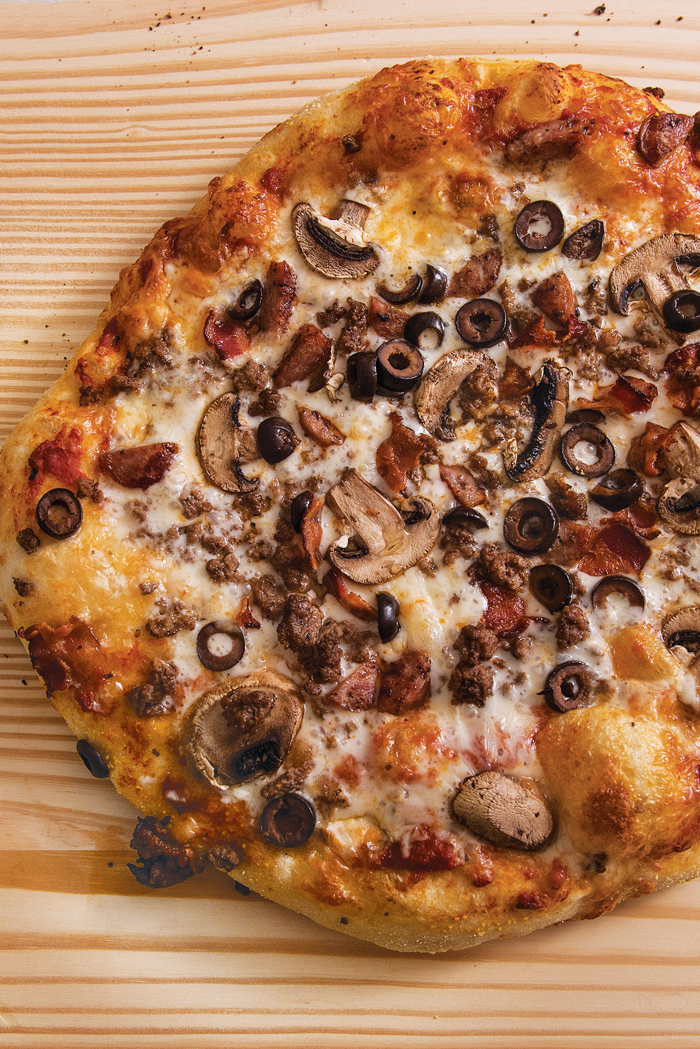 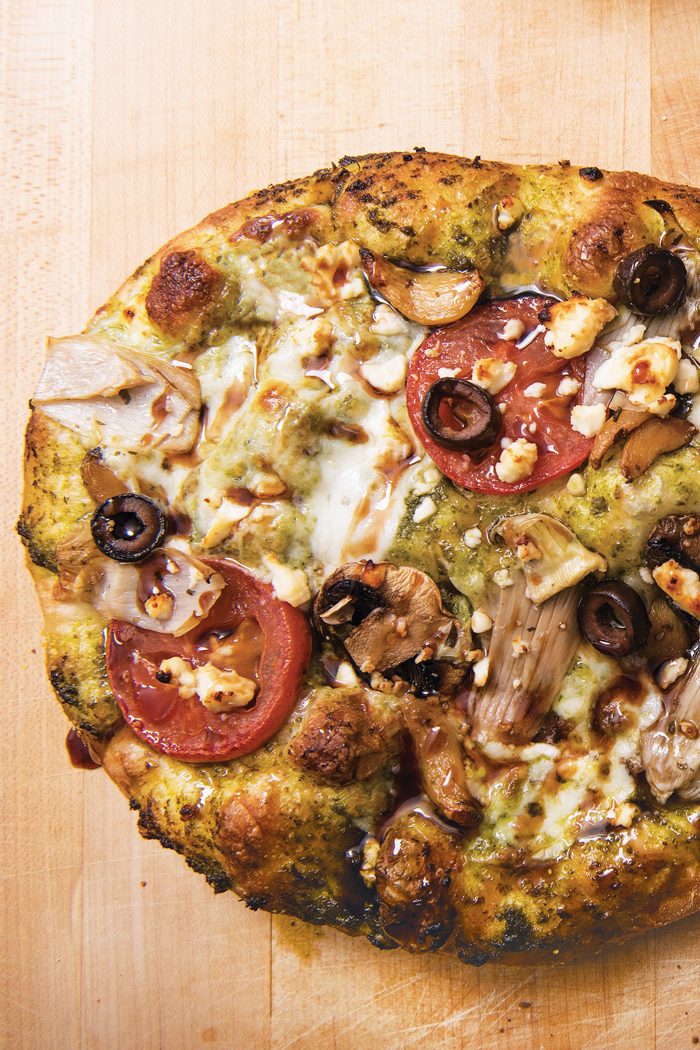 His and Hers Grilled Pizzas

“We are on opposite ends of the spectrum when it comes to pizza, ” Leah laughs. “Chris is more of a Neanderthal; he prefers multiple meats and not a lot of veggies. I favor the lighter Mediterranean style.” So, as a culinary compromise, they craft up one of each — “his” and “hers” versions atop crust made from homemade dough.

His Pizza (above left)

Her Pizza (above right)

1. Combine the water and yeast in a mixing bowl, and stir to dissolve the yeast. The mixture should look like thin miso soup.
2. Add the flour and salt to the bowl, and mix until you’ve formed a dough.
3. Let the dough rise until doubled in bulk (about an hour and a half). After rising, you can use the dough or refrigerate it for up to 3 days. Makes 2 10-inch pizzas.

Leah is originally from Tampa. Her hometown treasures its rich history of pirates, including the infamous José Gaspar and his ship, The Gasparilla. Each year, the city holds a reenactment of a pirate invasion also known as Gasparilla. This snappy salad recipe came from one of Leah’s close family friends (dubbed “Pirate Bill” because he is heavily involved in the annual invasion). It’s a briny, delicious crowd-pleaser.

1. Place chopped romaine in a large salad bowl.
2. Add avocado slices, both kinds of olives, edamame, feta cheese and Parmesan cheese to lettuce.
3. Sprinkle finely grated Pecorino Romano cheese over entire salad. (Leah says, “You want enough cheese to look like a ‘white out’ on top. When in doubt, add a little more!”)
4. Do not toss the salad until ready to serve. Then, add half of prepared salad dressing to top of salad, prior to tossing. After initial tossing, squeeze 1/2 of a lemon into salad and add more dressing if desired. Continue tossing, adding juice from the other lemon half, until everything is mixed together. Serve immediately. Serves 10 – 12. 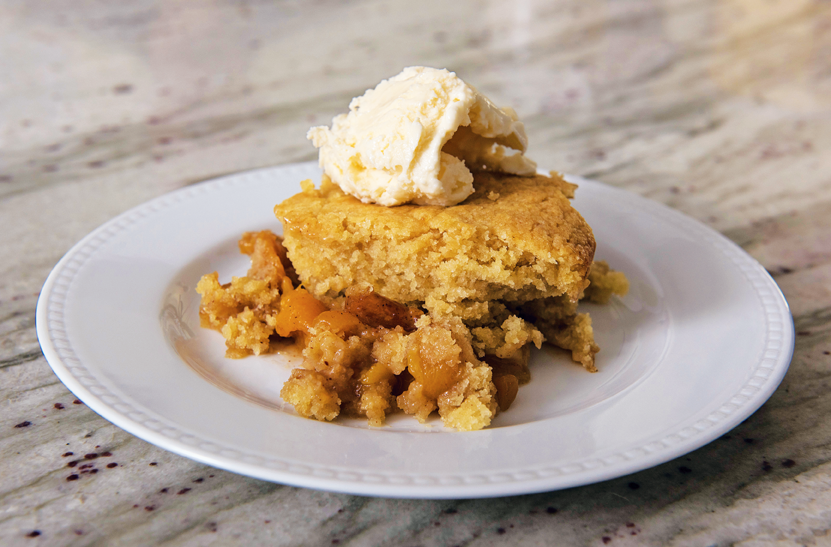 Peach cobbler is a sweet, splendid, much-loved Southern staple. The term cobbler is said to be derived from the cobblestone effect that is created by dropping the topping in random spoonfuls over the fruit and baking. Here is the Pfeiffers’ favorite recipe for the delectable dessert. Serve it warm and a la mode for added indulgence.

1. Preheat oven to 400 degrees if you are using a dark or glass pan, and 425 degrees if using a light color pan.
2. In a large bowl, combine peaches,  1/4 cup white sugar, 1/4 cup brown sugar, cinnamon, nutmeg, lemon juice and cornstarch. Toss to coat peaches evenly, and pour into a 2-quart baking dish. Bake for 10 minutes.
3. Meanwhile, to mix the dough, in a large bowl, combine flour, 1/2 cup of white sugar, 1/2 cup brown sugar, baking powder and salt. Blend in butter with your fingertips or a pastry blender until mixture resembles coarse meal. Stir in water until just combined.
4. Remove peaches from oven. Drop dough in spoonfuls over the peaches. Sprinkle the entire cobbler with the remaining 3 tablespoons of sugar. Return to oven and continue baking for another 30 minutes or so until the topping is golden. Serves 6 – 8.