The Birdcage Lounge at the Grand Hotel is still. Its thick windows muffle a morning thunderstorm moving in from the Bay. The only other sound is the light rustling of a newspaper somewhere around the corner.

At a table near the empty bar, songwriter Douglas Waterman, in a blue t-shirt and clean white cap, looks as if he’s just stepped off a wharf in front of Bucky’s. His relaxed, almost boyish appearance belies his real 30-something age and 13-year professional career. Waterman, who resides in Nashville, is sacrificing a few hours of his weeklong vacation in Point Clear to talk with MB about his winding journey from freelance music reviewer, to owner of American Songwriter Magazine, to professional songwriter in his own right. Like an unresolved melody, it’s a story that is still being written. And like the inspiration for so many of his songs, it all starts in the Port City.

Waterman is a Mobile kid through and through. He grew up in Spring Hill and worshipped Jimmy Buffett. “I had every Buffett album growing up.” But his musical influences didn’t stop there. At around age 6, he discovered the Beatles. “They just had amazing melodies. Lyrics, too, but it was the melodies that kept bringing me back.” He credits his parents, who familiarized him with Broadway and classical hits from a young age, for his wide range of musical tastes. “My dad (John B. Waterman II) was just a big-time music appreciator. He was always singing and whistling, ” Waterman says.

At age 13, Waterman dedicated himself to learning the guitar. “I went in with a friend of mine, and we bought a little electric guitar for 20 bucks each. It had a built-in amplifier, ” he says in a nostalgic tone. His early songs were simply attempts at putting his own poetry to music. “I still remember the first song I wrote. It was called ‘One Sweet River.’ It’s not too bad … I’m fairly proud of it, ” he says with a laugh. “But you do write some pretty bad stuff at that age.”

The Waterman name has roots in Mobile as deep as the live oaks. Douglas’ great-grandfather John B. Waterman founded the Waterman Steamship Corporation in Mobile in 1919 with only one ship. It would eventually become the largest family-owned steamship company in America. The Waterman Globe, a 12-foot rotating sphere depicting the political boundaries of the 1940s, attracted visitors to the Waterman Building (now the Wachovia Building) Downtown before it was deconstructed in 1973 and re-installed in the lobby of the Mitchell Center on the University of South Alabama campus in 1998.

“Growing up, I did have a general sense that the shipping company played a key role in the maritime history of Mobile. As I’ve gotten older, my curiosity about the shipping company and airline (Waterman Airlines) has grown, and I more fully appreciate the family history. One song in particular I wrote, ‘Something About Trains, ’ was inspired by my great-grandfather, John B. Waterman,   and my grandfather, Carroll B. Waterman, both of whom I never met. Before he founded the Waterman Steamship Corporation, John B. worked at several different railroad companies. The song is about constant motion and curiosity – feeling most alive when you’re off the ground – be it via the rails, the sea, the air. It’s one of
my favorites.”

Despite such strong ties to Mobile history, Waterman says he didn’t feel pressured to remain here. “My parents were supportive of whatever I wanted to do, and musically, there were just more opportunities in Nashville.”

In Tune with the Industry

After graduating from the University of the South in Sewanee, Tennessee, in 2002, Waterman flipped through a music directory, calling different publications about job openings. Starting with the “A”s, American Songwriter Magazine was one of the first he called. “And they said, ‘Well, come on in. We’re looking for an ad sales person.’”

Once he started working in sales, Waterman found what he describes as “a cool little magazine” with only one full-time staffer and a couple others working part time. He had been there a year, learning the ad side while freelance writing for other publications, when the publisher decided to sell. Waterman didn’t consider buying the magazine – that is, until his brother-in-law suggested it.

“I didn’t really have any entrepreneurial inclinations, but I knew I could be the editor, ” Waterman says. “I saw a lot of disorganization within the magazine, and it was just sitting there ready to blossom.”

At a Christmas party back in Mobile, Waterman bumped into an old high school acquaintance named Robert Clement, who was working for a software company in Birmingham and looking for a change. So Waterman offered one. In 2004, Waterman, Robert Clement and his father Tom Clement bought American Songwriter Magazine.

“The main thing the magazine had going for it was the title, ” Waterman explains. “The title ‘American Songwriter’ is limitless as far as genre goes, so the mission was to be the most eclectic songwriting magazine in the world. And I think it became that.”

In 2008, Waterman stepped away from the magazine’s day-to-day operations. “Robert (Clement) and I were going in different directions. We love the magazine, and it’s still our baby, but we needed to make a change.” Waterman is still a minority owner of American Songwriter and continues to assist in sales and overall support.

Waterman credits his days as editor-in-chief at American Songwriter for a bold career move. “I realized there were people like me who were writing songs but didn’t want to be rock stars. It was a whole culture I wouldn’t have known about if I hadn’t been at the magazine.”

The switch to composing was a daunting move. In one of his articles, Waterman described being a songwriter “as competitive as being a professional athlete.”

The process goes like this: Waterman’s manager will set up a co-write, a gathering of two or three songwriters in a room. “It might take three hours or it might take two different writing sessions, ” Waterman explains. Once a song is finished, a demo is either recorded on a phone or in a studio. From there, each co-writer’s publishing company looks for a way to get the demo into the hands of a recording artist. “It’s wild west, ” Waterman says. “Everyone’s just trying to get their songs heard.”

As for his own writing process, Waterman says he always has his antenna up. “If somebody says something that sounds like a song hook, I type it into my phone. It happens all the time.” He tells a funny story about watching a presidential debate in 2012 when a line spoken by Paul Ryan sparked an idea that eventually led to a song. “Inspiration can come from anywhere.”

Waterman has a guitar with him today, but he says it’s his wife’s instrument. Jessica, a performing musician, is expecting the couple’s first child, due in September.

With a handshake, Waterman puts the guitar on his back and strolls out the door of the Grand Hotel where the ground is wet but the rain has stopped. In a matter of days, he’ll be back in Nashville where there are more songs to be written. He walks with the neck of his guitar sticking out over his head. From here, it kind of looks like an antenna. 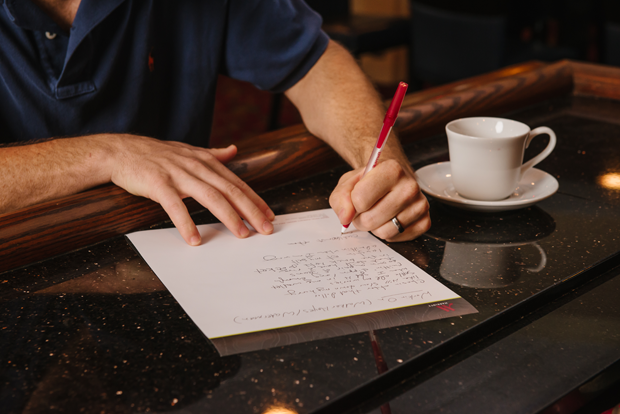 1) Always keep your antenna up. Take note of things you hear in everyday conversation that could be a song line or hook.

2) Sometimes writing with an instrument can inhibit melody. Try writing a tune in your head, just lyrics and melody, before trying to play it. Solo road trips are a great time to do this.

3) You don’t need to have lived what you’re writing about. Your immediate knowledge and experience has to be expanded to reach a more universal audience. Think about all the people you’ve ever known and all the stories you’ve ever been told, and there will be plenty of material to draw from outside of your own life.

4) Follow your gut and don’t self-edit too much, especially if you’re writing by yourself. You can always make tweaks later.

6) With the advent of smartphones, there’s no excuse not to capture a lyric or melody idea at the moment of inspiration. If you don’t, chances are it’ll be gone forever, especially if it’s a melody.

7) Read a lot, and consistently listen to a wide variety of music. Aside from pure enjoyment, they’re also good sources for song ideas.

8) Whether co-writing or solo, try composing when you’re not even remotely inspired. You might be surprised when something strikes and inspiration finally arrives after a little
patient waiting.

9) Every now and then, write with a particular artist in mind. This stretches your imagination. Try to actually hear someone like Johnny Cash or Tim McGraw singing the song as
you’re writing it.

10) Good phrasing is a nuts-and-bolts item and a big part of writing. Don’t overcrowd lines with words. Keep it conversational (especially in country music), and make sure it’s singable.