Nestled in the heart of downtown Elberta awaits a little house with enormous biscuits and handcrafted French toast. The diner, Grits -N- Gravy, began with a chance encounter. In 2011, Douglas Stewart, a former Army sergeant, was busily preparing his breakfast nook for a grand opening. Seeing construction, Patrick McDaniel approached, asking what he was doing. Stewart replied, “I’m about to open a breakfast restaurant.” McDaniel answered, “You should hire me; I am the omelet king.” Stewart did and McDaniel is. Try the Everything  Omelet, with sautéed steak, cheese, peppers, onions and mushrooms, folded into fluffy eggs from happy chickens. It comes with sausage or bacon, biscuits, grits and trimmings. Grits -N- Gravy is a friendly place where everyone is on a first-name basis. In addition to Doug and Patrick, there are the waitresses, Michelle and Bridget. At 6 a.m., today’s first customers are me and Dan. “Dan is a barber, ” Stewart says. “He moved to Alaska but found out they don’t get their hair cut as much as we do, so he came back to Elberta. You want the usual, Dan?” he shouts. The next time I visit, he will shout, “The usual Emmett?” as he prepares my Everything Omelet.

Robertsdale rocks the night. OK, maybe not, but Robertsdale cheesecake does. And it’s served around the clock at the Derailed Diner. Finding the restaurant is a bit tricky, even from its parking lot, because it is inside the sprawling Oasis Travel Center, right off I-10 Exit 53. But once inside, you can’t miss the deliciousness. Diners grab seats at bars, booths, on a school bus or in a railcar. Daily specials are top-notch chicken dinners, shrimp and barbecue. But whatever you do, don’t leave without the pecan pie cheesecake. “It’s a two-person dessert for $4, ” says general manager Linda Scott. “The bottom is pecan pie, the top, cheesecake.” Locals love it, truck drivers plan trips around it, and critics rank it as one of the 100 Alabama dishes to try before you die.

At about the same time that Elberta’s Grits -N- Gravy closes for breakfast, The Roadkill Café, just down the street, opens for lunch. And no, the State Street eatery does not serve what the name implies. “That started as a joke, ” owner Mike Williams notes. “Years ago, we were preparing the vacant building for business and someone taped a sign on the window, ‘Roadkill Café.’” The name stuck. Instead of roadkill, it offers chicken that is to die for. Williams and company dish out about 400 pounds of poultry every week, serving 150 to 200 customers daily. Not bad considering they are only open two hours a day. The café is also known for fried catfish and mullet. Be advised, Friday is their busiest day, and the eatery draws locals as well as Pensacola-Baldwin County commuters. But, do not be alarmed by the crowd size; the Kill crew moves the line with speed and friendly service. 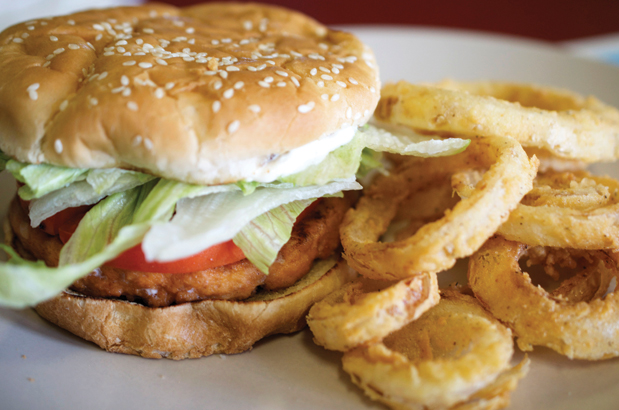 If you batter it, they will come. And homemade batter is the secret to The Oar House Restaurant, Foley’s pride in all things fried. “I can’t tell you everything. But it starts with corn flour and spices, ” says Vikki Torretti, who enjoyed working for the Oar House so much that, in 2007, she bought it. “Everything in here is made from scratch. We use no processed foods.” The Oar House’s specialty sauces are a hit as well, sold by the jar so you can take them home. The menu changes, but favorites include beef medallions, chicken and desserts. Today’s special is homemade pineapple upside down cake. Be still my heart. 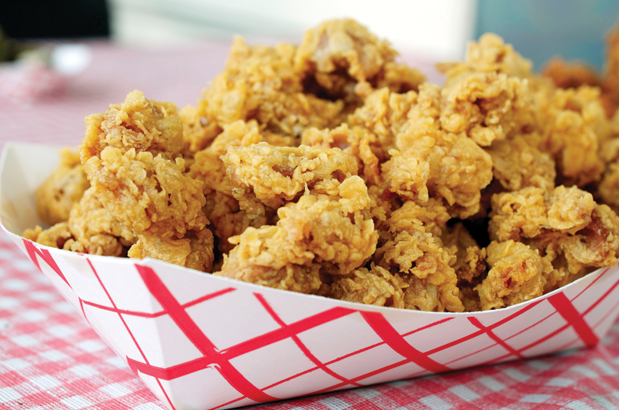 What could possibly add to the charm of Fairhope’s shimmering waters, graceful sailboats and flowering walkways? How about 120 pounds of chicken gizzards? That and another 120 pounds of livers are served every week at Danny’s Fried Chicken, the restaurant with more clucks for the buck. “We also serve about 2, 000 pounds of chicken a week, ” says owner Scott Morrow. So what is the secret to Fairhope’s finger-lickin’ chicken? “I can’t tell you our seasoning recipe, ” Morrow adds. “But the key is frying it crisp, and we do.” Danny’s has a location in Robertsdale too, but the Fairhope spot offers a buffet from 11 a.m. to 2 p.m. The buffet line always has chicken, of course, but in addition, it offers another meat, seafood and select vegetables. And, Danny’s has great made-to-order hamburgers, too. “Each one is specifically built to the customer’s specifications, ” Morrow says. “There is no assembly line.”

For two and a half years, Teresa’s Country BBQ, in Bay Minette, has been a local favorite. But it’s also the barbecue of choice for visitors from Daphne, Fairhope, Austria and England. Duane “Dog the Bounty Hunter” Chapman liked it, too. “He loved the place, ” owner Teresa Hicks says. “Unfortunately, I was too busy to talk to him.” She works fast, but good barbecue is slow. Teresa smokes about 700 pounds a week over pecan wood for 12 to 16 hours. The process starts at 4 a.m. to render some of Baldwin County’s best pulled pork and ribs of delight. 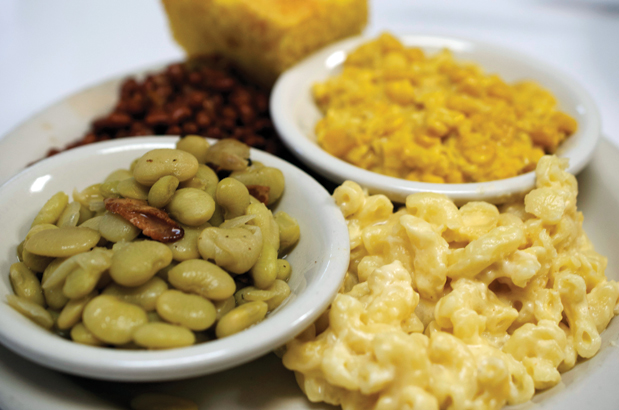 Spanish Fort insiders use social media like the rest of us – with, perhaps, one difference. Every morning they check Facebook for “today’s special” at Cheryl’s Café & Market. Cheryl Barnes updates the menu at her namesake business daily, scribing entrees on a chalkboard, which she then posts on Facebook. Offerings include two soups, one of which is always crawfish bisque. “It’s a customer favorite, ” she says. “Very creamy, buttery and spicy. That sets ours apart.” Barnes also handpicks the cafe’s vegetables; usually 20 choices are offered daily. Plus, their shellfish is fresh from the waters of Louisiana (not the Mekong Delta). Depending on the day, entrees include pot roast, chicken, shrimp, hamburger steak, pork chops, salmon and more, just like Mama made them. 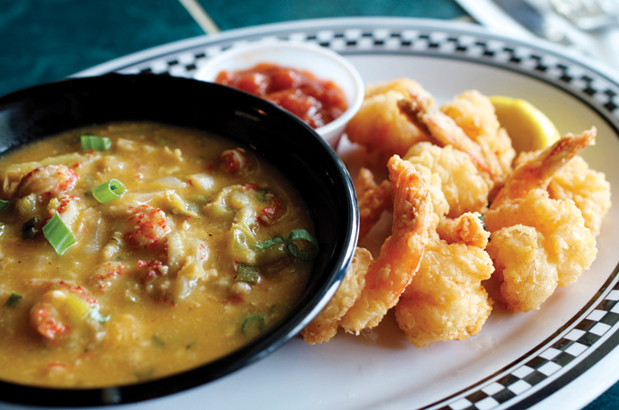 “Laissez les bons temps rouler!” Let the good times roll! In Silverhill, Cajun-Creole cooking is the way, and Café Acadiana is the place. “We serve a whole lot of locals, ” says co-owner Gerald Ardoin, “because Silverhill is a bit off the beaten path for tourists.” Customers “take the hill” for crawfish pie, boudin balls, shrimp étouffée, jambalaya and much more. Signature dishes include Rib Eye Opelousas – Angus rib-eye steak ladled with fried shrimp tossed in a sweet and savory sauce. Another favorite is the Boudreaux’s Burrito, a shell stuffed with crab, shrimp and crawfish, bathed in special homemade sauce. Ardoin brings 35 years of restaurant experience from his time in Louisiana. He moved to Silverhill about 10 years ago and opened Café Acadiana last year. “Silverhill has been fantastic, ” he says. “The town and café have far exceeded my expectations.”