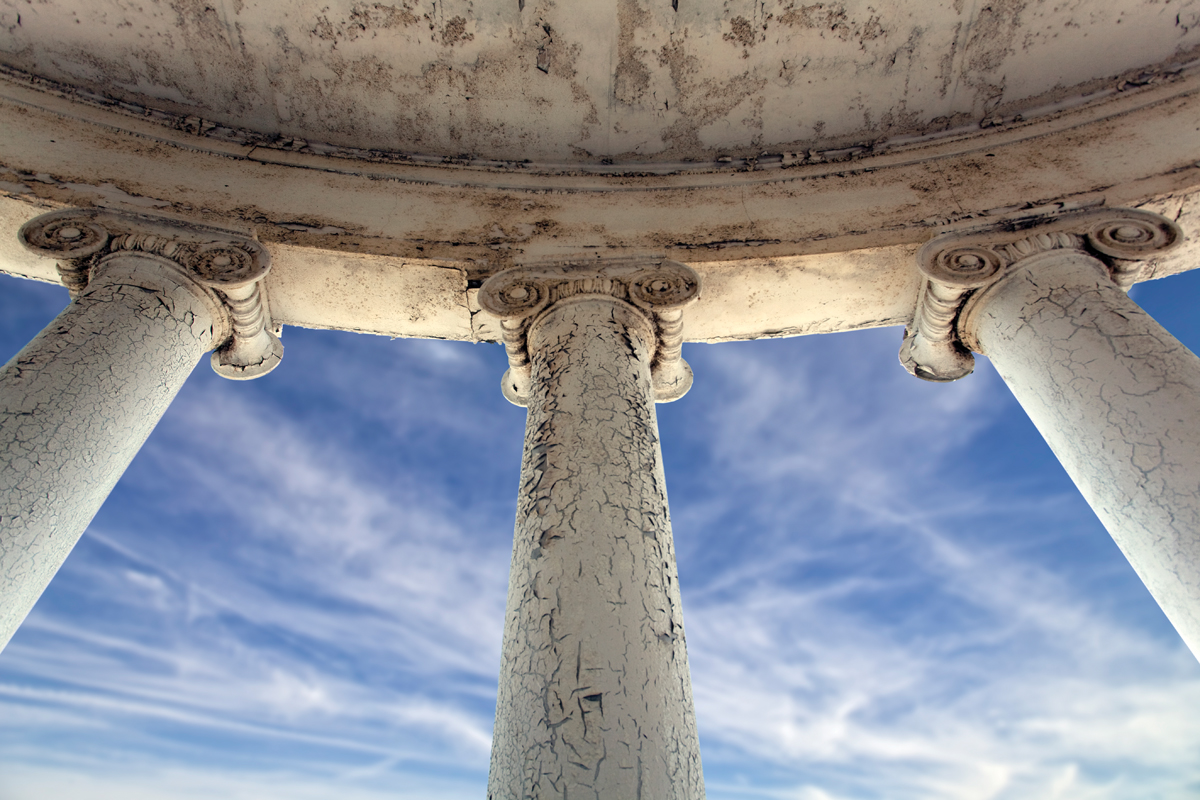 There’s a resurrection happening in Mobile. As years and even decades passed, many of our historic buildings stood empty. Crumbling and overlooked, they seemed doomed in the face of overwhelming disrepair. That is, until people with vision and hope stepped up to invigorate these buildings with new life. They now await bright, exciting adventures ahead, stronger than ever. They have been reborn.

Four years ago, Barton Academy topped the “Restoration Wish List” written by MB contributor and historian John Sledge. The final bell seemed to have rung, and its blackboards had long since been erased. In the months following that story, however, this wish would come true as the Barton Academy Foundation came together to save the building.

“I approached Dr. Russ Lea [former vice president of research at the University of South Alabama] about what would be an appropriate use of the building, ” Jaime Betbeze, president of the Barton Academy Foundation, shares. “He said Mobile needs a true international school that focuses on world cultures and prepares students for management roles in inter-
national corporations. Mobile really is an international hub, and our students need to be able to operate on a world stage.” And with that suggestion, a dream took shape.

In the years since, that dream has been inching closer to reality. The Mobile County Public School System contributed $4 million for the building’s external renovations, now completed, in a show of commitment to the cause. Now, it’s up to the Foundation to raise about $12 million in private donations for the internal renovations that would reconvert spaces from offices back to classrooms. The Foundation is optimistic. Betbeze hopes to have students in desks at the start of the 2019 school year.

Why is Barton such a Mobile landmark? Betbeze easily lists off plenty of reasons. Besides its iconic white columns and uniquely grand architecture for downtown, he reveals, “Historically, this is the birthplace of public education in Alabama.” He points out that the idea of educating a state’s entire populace was a foreign concept in the 1830s, and Barton helped spearhead it.

Then there’s the simple nostalgia former students have for the building. Betbeze’s grandmother, for example, graduated from Barton. These factors have worked together to ensure that the school will never be forgotten and will give new generations of Mobile’s children a quality education.

“There’s just this bond between the people and the place, ” Betbeze concludes, “and that’s why you see this out-pouring of love for it.” 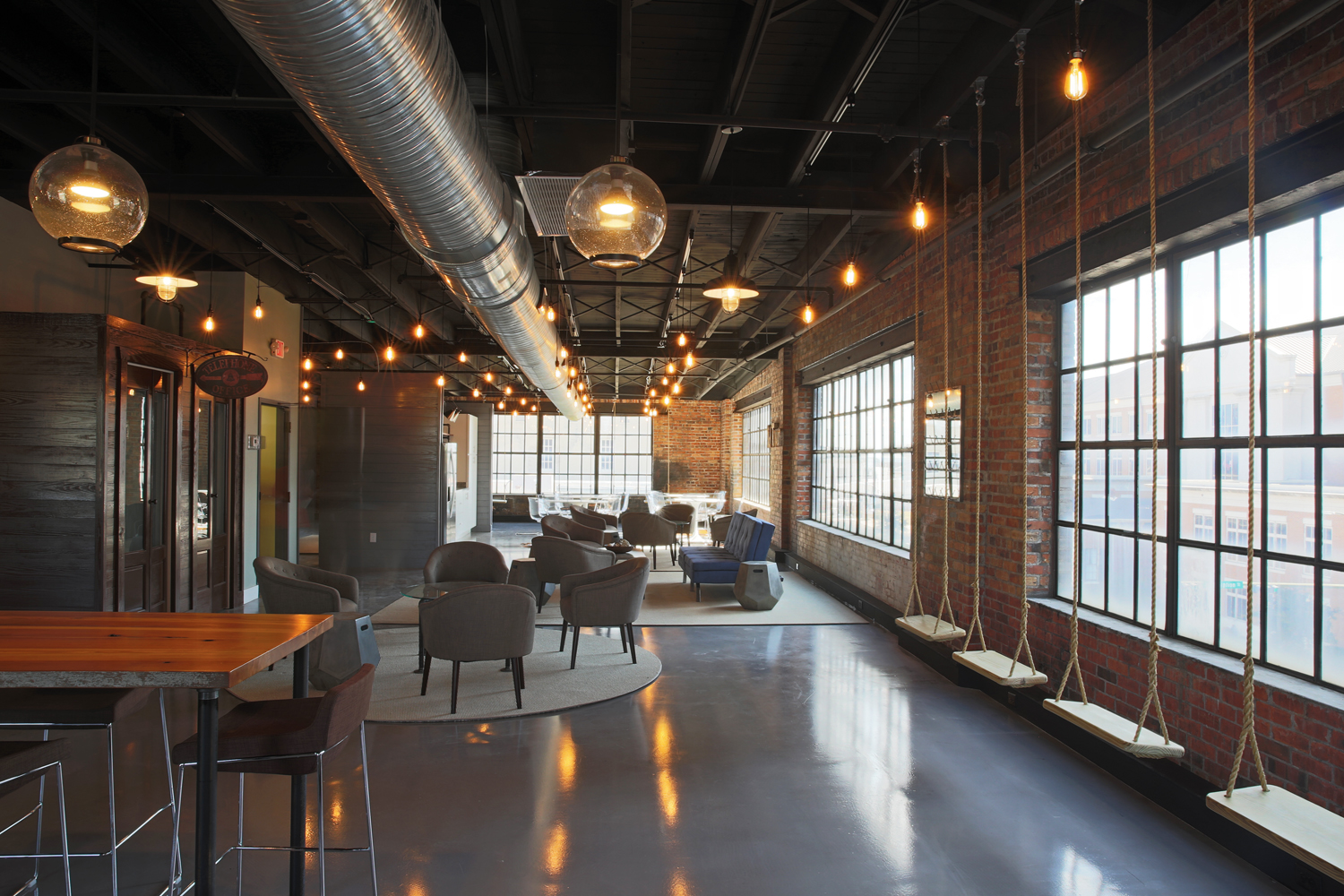 Executive director Adrienne Golden shares that the city decided to lease them the fourth floor of the Government Street building for a nominal fee if Fuse took on the $500, 000 restoration of the space. “Some people called the deal cool, but many said it was crazy!” Golden laughs.

Built on the site of a circa-1860 Italianate mansion belonging to the Herndon family, the current building’s four floors served different purposes over the years. The third and fourth floors were grand vehicle showrooms for nearly 40 years before the changing size of modern cars made these formerly spectacular showrooms obsolete. The floors were transformed into office spaces and, eventually, storage.

Fuse dug into the renovations in 2016, bringing the 6, 000-square-foot floor of the building ­— which had not been occupied in three decades — into the 21st century and preserving the historic character of the space. When the Fuse Factory officially opened in November 2016, the midcentury modern vibe completely hid the fact that, a year prior, the space was vacant and deteriorating. Now, exposed brick walls instantly created an industrial atmosphere while a number of swings and smooth wood-grain workbenches added an air of refinement. Rustic met quaint. Vintage now showcases modern. The floor’s new look reflects its new, positive future: unique, optimistic and always bright. 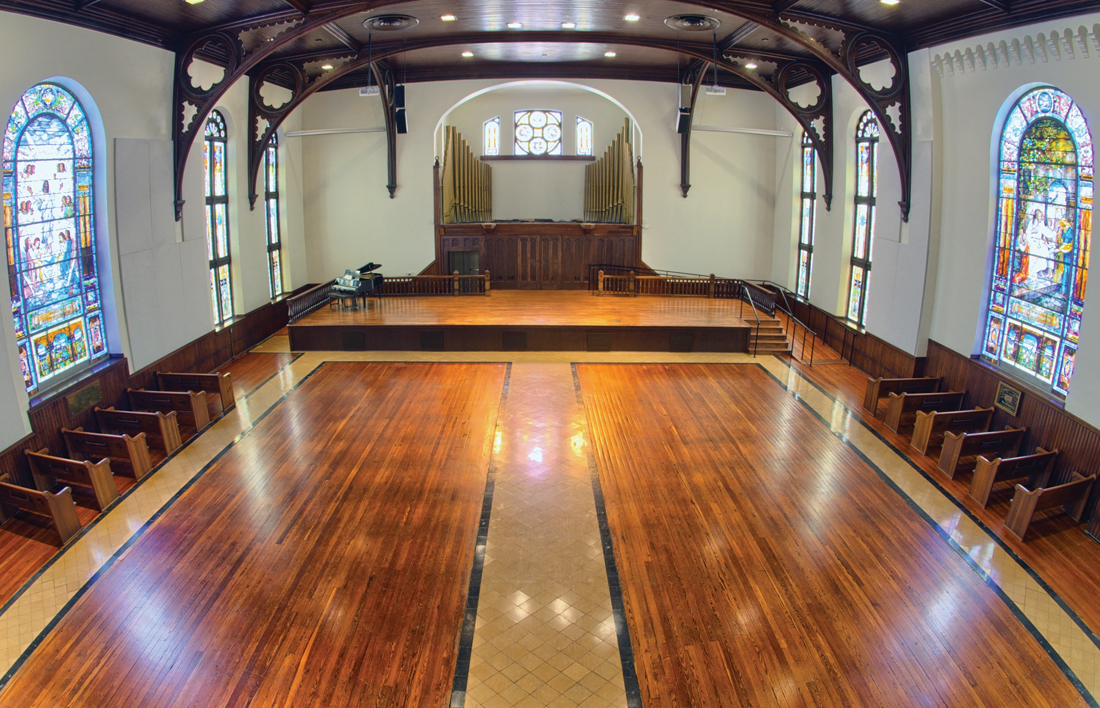 Now a site for gorgeous weddings and mystery concerts, The Steeple on St. Francis has come a long way from the vacant church it was just a few years ago. Ginna and Cliff Inge scooped up the 19th-century house of worship in 2015, and a year’s worth of renovation was necessary to bring the structure back to life. Part of the roof was falling through, which meant that the church had a handful of unorthodox occupants. “The Inges brought someone in to look at the space, and they spent most of their time trying to shoo birds away. Tons of pigeons were coming in through the steeple!” executive director Mary-Lacey Zeiders of the venue shares.

The Inges saw the church on television one night, and it was theirs a week later. Even though they wanted to save the building, they didn’t quite know how, so they consulted as many people as they could. “Despite the dirt, the pigeons and the smell, I recognized the beauty and worth of preserving this gem and opening it to the community, ” Ginna says. More than anything, they just wanted to contribute to the rejuvenation of the Port City. Surprises, such as gorgeous original Alabama pine hardwood floors underneath tiles throughout the first floor, kept the team intrigued and excited along the way.

In the end, the Inges transformed the church into The Steeple, a music and event venue in the heart of Downtown Mobile. Restoration, for Zeiders, is about making Mobile into the best place it can possibly be while also preserving its history. “We are a people and a culture based in tradition, and so much of that is wrapped into these buildings, ” she says with fervor. “Our tradition and culture and the heritage of our city are what keep people here and bring people back.” 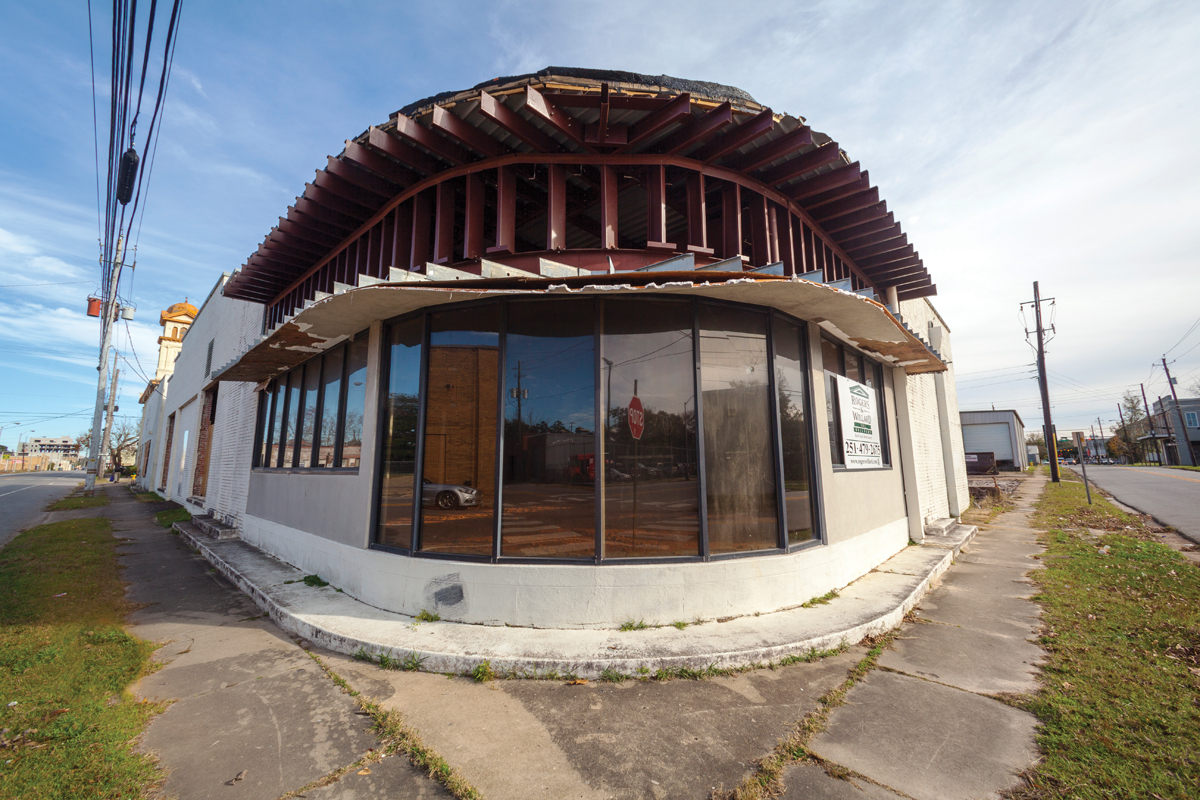 In the process of moving on up, the duo behind Olde Mobile Antiques actually headed down to St. Louis Street. After years of contemplating a move and expanding their growing showroom, owners Greg Reynolds and Charles Parmenter stumbled upon the Nash/Ford Automotive Building a few blocks from Dauphin Street. “It had a great look, a great ambiance, and it was a perfect space to let us expand our huge monthly estate sales. We plan to be in by May, ” Parmenter says.

Perhaps it’s only fitting for these two historians to move their business into a structure with such strong historical ties. They envision taking advantage of incredible architectural details, such as the magnificent 28-foot dome ceilings, red brick walls and a faux rollup garage door. “It’s going to look just like it did in the 1920s, ” Parmenter explains as he details their blueprint for restoration.

Since a project of this caliber always  comes with its challenges, the duo hired a professional team to provide assistance. McNair Historic Preser-vation has guided Parmenter and Reynolds through the challenging process of attaining historic tax credits, a huge incentive for anyone looking to restore aged or decrepit buildings.

“It is our goal to help find contemporary solutions for historic buildings, ” owner Stephen McNair shares. He and his team helped Olde Mobile Antiques’ owners with planning, design and implementation, ensuring that they met the necessary regulations for their credits. (The firm also aided in the restoration of the Kittrell-Milling building and placed the Isle Dauphine on the National Register of Historic Places.) The federal tax credit for the Nash/Ford building, for instance, gives the owners a 20 percent return for each dollar spent on restoration.

McNair continues, “It’s all about preserving the character of a building. You want to walk in and see that this was an automobile showroom.”

For Parmenter and Reynolds, jumping into a huge renovation project took some “daring and imagination, ” but they couldn’t be happier about the move, which will allow them to walk or bike between home and work.

“Plus, 90 percent of our customers are thrilled that we’re moving Downtown, ” Parmenter notes. “We all want more people to come Downtown in Mobile, to take part in its history.” 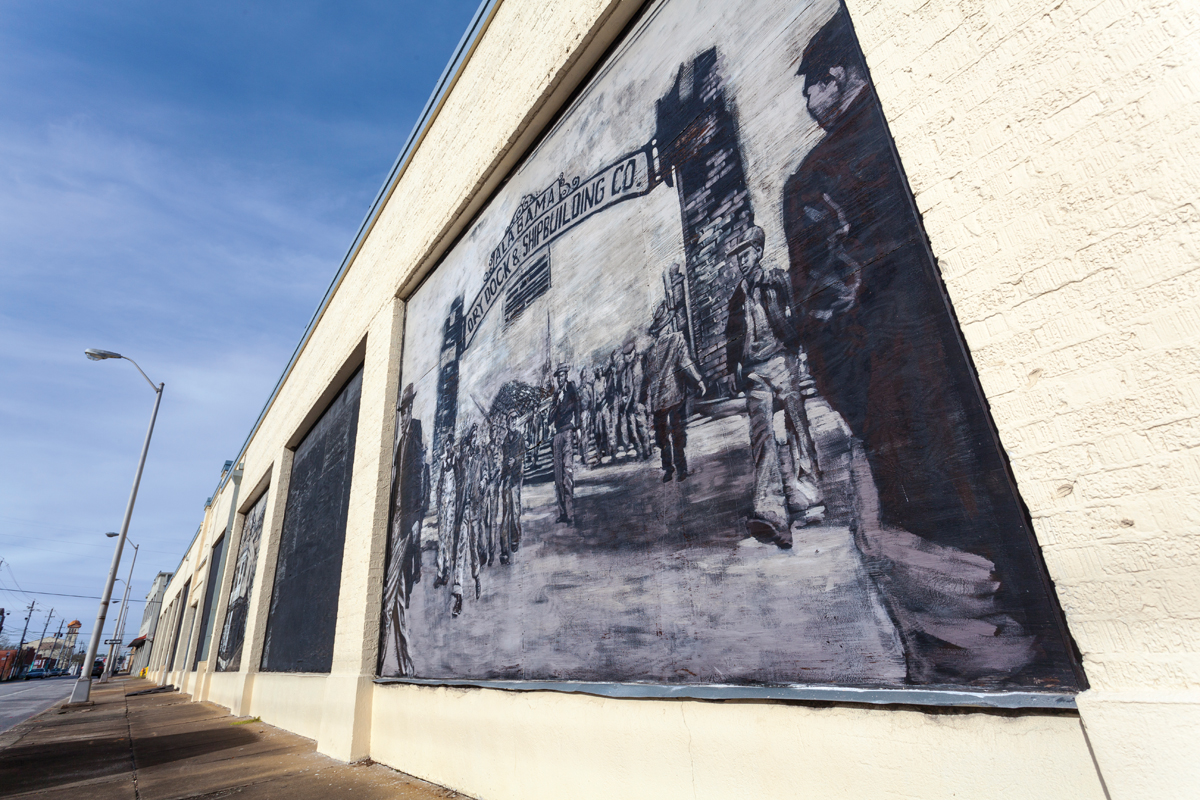 For decades, Mobilians ventured to St. Louis Street to buy or repair their Dodge vehicles. Then the cars all drove off, leaving the building up for grabs. While a few other businesses have called the building home in the intervening years, it currently sits empty as it awaits its tune-up and a new life ahead.

Bought by Precision Engineering, the Kittrell-Milling building features unique, eye-catching showroom windows, which the new tenant plans to lovingly restore. “The proposal is to restore all the original storefront windows, the showroom tiles, all of the exterior brick, and a canopy over the front door to match the original 1926 design, ” Stephen McNair explains.

Alongside the Nash-Ford building, Kittrell-Milling has been added to the Automotive Alley National Register District. Also like Nash-Ford, McNair Historic Preservation has helped with designs and tax credits along the way, which is great since this building qualified for federal and state historical tax credits that aid immensely in the restoration efforts.

Searching for a location equidistant from Mobile and Baldwin counties, Precision Engineering also wanted to enhance the downtown community. “We believe that downtown Mobile is going to continue its resurgence and become a destination for new residents, businesses, retail and restaurants, ” says Joe Kenny with Precision. The company hopes to be done with renovations in 2018.

“It’s like California came to Dauphin Island.” These words from Cart Black-well, assistant director of the Mobile Historic Development Commission, perfectly describe the retro-style circular architecture of Dauphin Island’s quintessential members-only club. The structure looks as though it were ripped from a “Mad Men” episode and transplanted onto the island community.

Mobile architect Arch Winter brought the unique building into existence. Constructed in the 1950s, the Isle Dauphine functioned for decades as the barrier island’s exclusive “country club-esque” gathering spot for property owners on the island. At the time, membership in Isle Dauphine was a precious commodity.

In 2012, the club closed for financial reasons, and the property sat empty for just over one year. However, the golf club and restaurant reopened to the public in 2015 with some restoration, thanks to the Dauphin Island Property Owners Association, which owns the building. Rather than running the businesses themselves, they now lease the space to others who now run the various businesses.

Blackwell further describes the Isle Dauphine: “It’s something we don’t see often here. It’s not your typical Southern structure. It speaks of cultural impulses, of post-War America, and you can’t get more appropriate for Dauphin Island than this wonderful pleasure palace.”