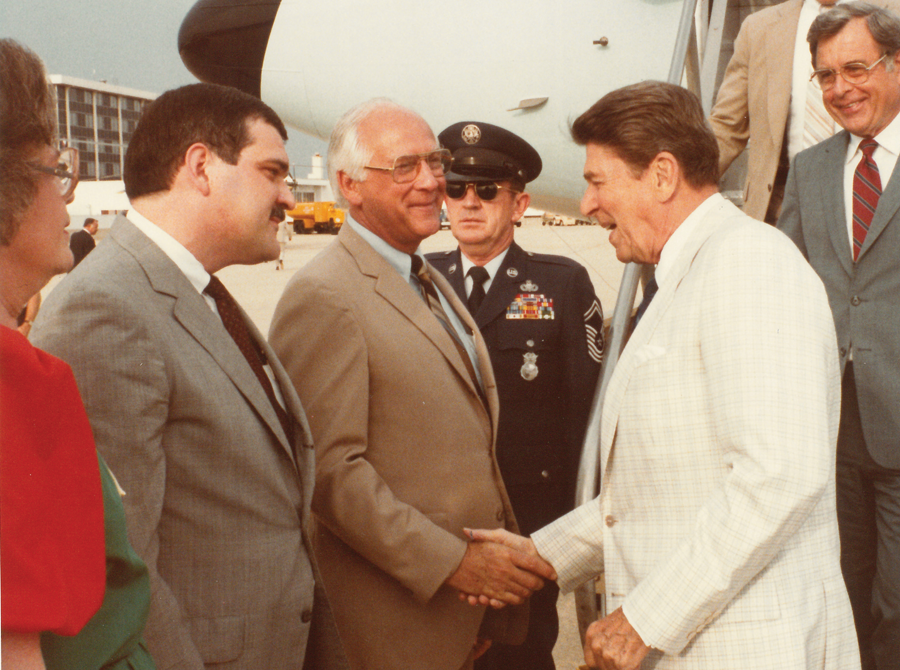 ABOVE Jack Edwards shakes hands with President Reagan at an Alabama airport.

I had the privilege of working alongside six presidents during my 20 years in Congress. This included Presidents Lyndon Johnson, Richard Nixon, Gerald Ford, Jimmy Carter, Ronald Reagan and George H.W. Bush (although he was vice president at the time). Back in those days, the president met with the leaders of Congress — House and Senate, Democrat and Republican — at the White House almost every Wednesday morning at 8 a.m. for an hour or so in the Cabinet Room. I was always involved in those weekly meetings beginning with President Nixon because I was the elected vice chairman of the House republicans.

Of the presidents I worked under, I had special relationships with Presidents Ford and Reagan. President Reagan was a very personable and available president. He called me in so many unexpected places to speak seriously about bills we were working on. I remember one instance, sometime in the early ’80s, when I was trying to get the Defense Appropriations Bill through the House of Representatives. It took longer than we hoped it was going to take, and by the time we got through with the bill, it was about 11 p.m. My wife Jolane had been sitting up in the gallery in her evening dress because we were supposed to go to the French Embassy for a reception. She finally just had to go home because the reception had ended long before the bill passed.

Early the next morning, I had to catch a plane to Albuquerque, New Mexico, to give a talk to the leaders of the defense industry. I had just finished my speech and we were having a Q&A session when a staffer put a note in front of me saying that President Reagan wanted to speak with me. Well, I thought I’d have a little fun, so I said, “I know y’all are looking to see what this note is they just put in front of me, and I’ll read it to you. It says ‘President Reagan wants to talk to you.’”

I paused for a moment to let that sink in, then I said, “Who’s got the next question? I’ll call him later.”

They all sat there for a minute, totally silent. Then the room broke up laughing, and they were saying, “Go call the president!”

So I went into the next room and called him. He said, “Jack, I want to thank you so much for staying late and getting that bill through. It was very important. And I also want you to tell Jolane that I understand she was sitting up in the gallery in her evening dress waiting to go to a reception and never did get to go. I want you to tell her how sorry I am.” That’s just the kind of guy he was. Some staffer told him that, and he felt the need to apologize.

Another time, in the summer of 1984, President Reagan came down to Alabama to speak in Decatur. Air Force One flew to Huntsville, then the motorcade traveled to Decatur. After the event, the motorcade was returning to Huntsville. Highway patrol led the way, followed by the president’s limousine, then the Secret Service, then the car I was riding in with Sen. Jeremiah Denton. There was a media pool in there as well. Well, our motorcade flew right by the turn to the Huntsville airport. I said to Sen. Denton, “Jerry, that’s our turn right there!”

He said, “Oh no, they know where they’re going.”

I said again, “That is the road to the airport!”

We went another quarter of a mile, and the whole motorcade turned into a McDonald’s parking lot. It looped all the way around the back of the restaurant, came back around the other side, and the president’s car stopped right at the door. The president got out with Jim Baker, his chief of staff in those days, and they walked into McDonald’s.

The media was going crazy at this point. Nobody knew this was going to happen. They were jumping out of their car trying to get inside the restaurant. Sen. Denton and I got out of our car, went inside, and by the time we got in, the president had a hamburger, an order of French fries and a Coke.

There were two guys sitting at a table, talking about whatever, and the president of the United States walked up and said, “Can I join y’all?” These guys’ jaws hit the table, but he sat down with them and finished his hamburger and Coke.

Now this was back in the day when my wife would let me drink strawberry milkshakes, so I got myself one of those. As we left the restaurant, Jim Baker said, “Jack, why don’t you ride the rest of the way to the airport with President Reagan? You’re retiring soon, so it’ll be nice for y’all to have a visit in the car.”

So I got in the car with President Reagan, the two of us sitting in the back seat and Jim Baker sitting in the seat facing the backseat, and there we went down the highway again to the airport — the president finishing off his French fries and waving out his window, while I’m sucking on my milkshake and waving at the crowd from the other window.

By the time we got to the airport, I could have sworn I was president.