Judy Aronson always wanted to be an artist. She majored in art education at New York’s Skidmore College in the ’60s. But one difficult temporary job (replacing a New York City art instructor on maternity leave) was the extent of her teaching career. And, she rarely picked up a brush after college — until moving to Mobile in 1992.

Since her 25-year hiatus ended, Judy has enjoyed painting her memories – scenes, still lifes and buildings that encapsulate beautiful moments in time. Quite often, these include feel-good vistas of iconic sites around Mobile, such as Cathedral Square, Callaghan’s Irish Pub or Cammie’s Old Dutch Ice Cream Shoppe.

She prefers working en plein air: painting on location and from life. But her multi-session style and an active schedule make painting from reference photos in the studio far more practical. “While I’m not an artistic photographer per se, I am interested in creating an artistic view with most of my photographs now, ” Judy says. “And I can really see a change. When I look at images that I shot on trips 15 or 20 years ago, when I wasn’t painting, they’re very different than those I take now. I’m actually painting with my eyes when I’m taking photographs.”

Judy has developed a somewhat unorthodox style that, at times, gives her paintings harder edges and crisper detail than one sees in traditional “fast and loose” watercolors. She has always painted with transparent watercolors, although she did use gouache (opaque watercolors) for the first time recently — in a few isolated areas of a Knights of Revelry painting (see below). She says color is her primary focus. “My use of color and the way I manipulate the paints and let them run into each other and mix on the paper are, I think, my strongest points.” 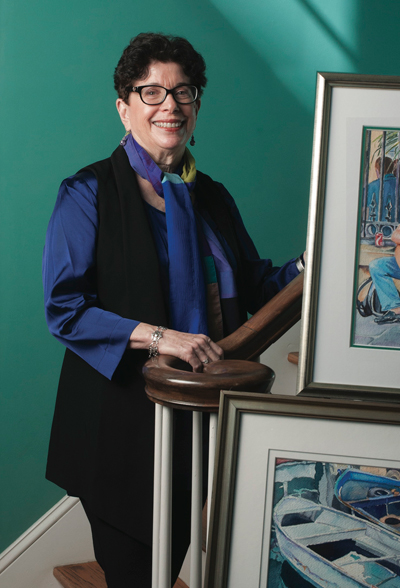 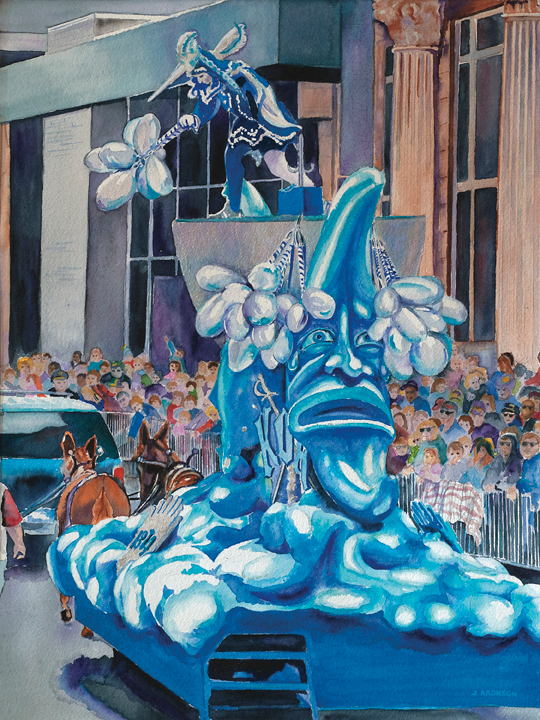 ABOVE LEFT The artist, a signature member of the Watercolor Society of Alabama, poses with a painting of two boats that was recognized by the organization.

ABOVE RIGHT “In this case I stayed true to the photograph, ” Judy explains. “I visited the KOR float barn and talked to a man who was actually working on the floats. I got samples of the paint, so that the colors would be fairly accurate.”

“People say that watercolor is so hard because if you make a mistake you can’t fix it. Although that’s not really true, it’s certainly not like oil or acrylic where you can just scrape it off, ” Judy says. While many painters “get it all solved wet into wet and finish in one sitting, ” Judy explains that there are many other ways to do watercolor. “You can actually control it more than people think. You wouldn’t want to redo a whole picture, but you can correct a value, by rewetting an area and then adding more color to darken it, or make it brighter.  You can lighten an area or edge by lifting out the color, and you can make an area recede by glazing over it with a light wash.”

To prevent paints from interacting on paper, she frequently uses masks. “Some watercolorists hate it; they consider it an improper shortcut.” But Judy disagrees. “I do it so I can be freer. I don’t have to worry about each stroke.”

In masking, areas of the watercolor paper are coated with a rubber cement-like substance. It forms a barrier that the thin, watery paints cannot penetrate. In watercolor paintings, white is generally the raw paper showing through. Some watercolorists mask out those areas; others carefully paint around them.  Masking also stops the paints from migrating as they soak into the absorbent paper, which allows for an obvious, hard edge between colors. But it’s not Judy’s only way of keeping the paint within specific boundaries.

“I love to drop in colors. I wet the surface area that I want to paint. Usually the pigment will stay there, particularly if I keep the paper flat. Some watercolorists paint at an angle. I paint flat.”

Judy says that she can drop in a single color from her palette or mix those colors wet into wet on the paper. “For instance, if I wanted a shadow, I might just wet that little place and drop in purple, ” she explains. “Or, instead of putting purple down, I could use ultramarine blue, opera pink and alizarin crimson and allow them to mix on the paper. And then I would pick it up and manipulate it to get the paint to move the way I’d like.” 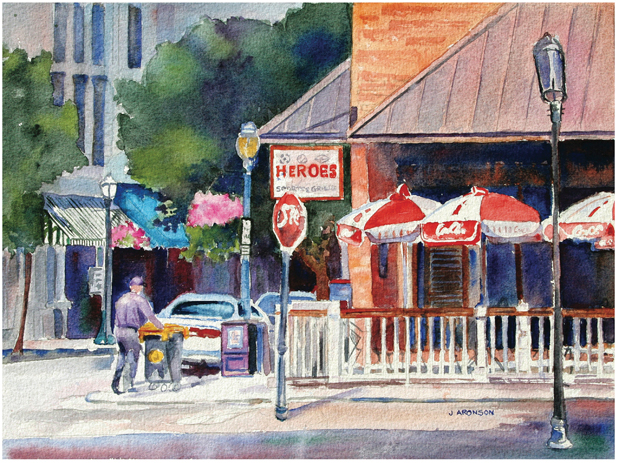 ABOVE Downtown favorite Heroes Sports Bar is another landmark that Judy has captured with her graceful watercolors.

Returning to the Brush

Judy’s journey back to the art world is an interesting one. While she was out of the workforce, caring for their first child, her husband Nathan completed his post-doctoral work at Rockefeller University. He accepted a professorship at Penn State. Openings for art teachers were rare in the local University Park school system, so she returned to school briefly, augmented the master’s degree in counseling she’d earned years earlier, and became an academic adviser.

“I began helping out the undecided students. Then, for the last five years that we were there, I was head of the advising center for the College of Art. I came full circle. I was able to guide students who were venturing into art, architecture, music and drama.”

Judy says that while she didn’t “do art” during her 23 years in Pennsylvania, she didn’t abandon it either. “I took a few classes and became a docent at the art museum at Penn State, where I  really learned about all of the wonderful exhibits.” She also served on the museum board for 12 years.

Then, in 1992, Nathan joined the University of South Alabama’s College of Medicine as chairman of the department of biochemistry and molecular biology, bringing the family to the Port City.

Once here, under the mentorship of talented local artists, her drive to paint came back in full force. She started with lessons from Jerry Roldan, through the Parks and Recreation Department’s Art Instructional Center at Lavretta Park. She added classes at the Eastern Shore Art Center and studied with Lauren Chavez at Alabama Art Supply. She even participated in international workshops led by local watercolorists, traveling to Provence, France, with Madeline Busby and to Guatemala with Don Andrews. Then there was Bill Morris. “I’ve really gained a tremendous amount of technique and inspiration from him.”

“Mobile was a great move, ” says Judy, her ever-present smile brightening a bit. That adoration certainly shows in her vast portfolio of scenes of the city. 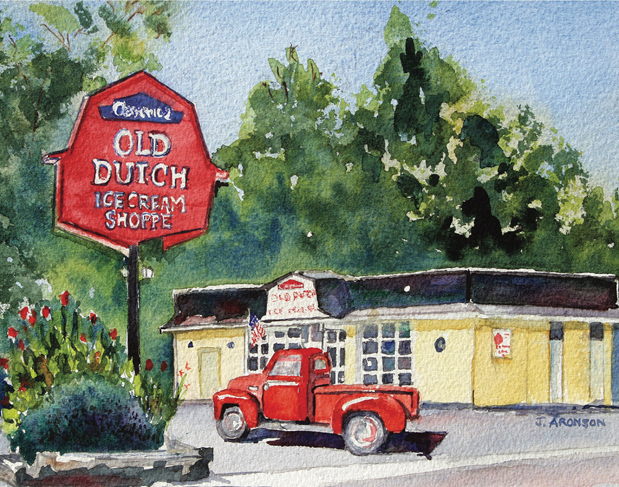 ABOVE Judy added the old truck in a couple of her works “because of the color red.” 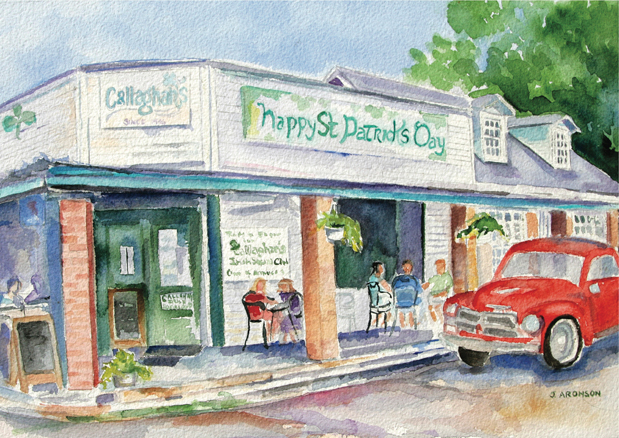 ABOVE Judy says for a landmark like Callaghan’s Irish Social Club to end up in one of her paintings, she must enjoy the atmosphere. 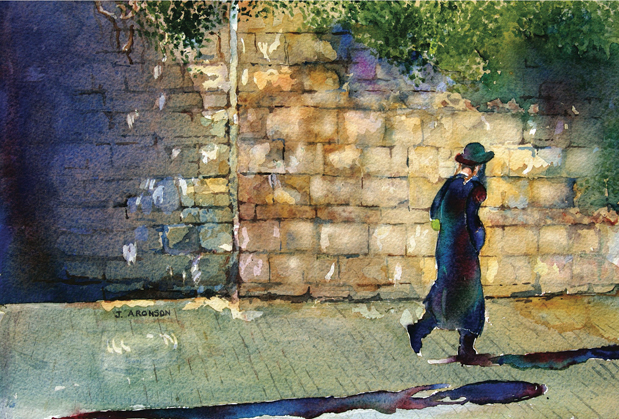 ABOVE Judy frequently paints from photos representing her and her husband Nathan’s travels. “If you can say any street in Jerusalem is ordinary, this street was. It was a regular road. And this was just a regular man, a regular religious man. He had something tucked under his arm, some bread, maybe, that he had bought. He was just walking by. It was a moment captured, ” she says.

To see more of Judy’s work, go to judyaronsonart.com