A quarantine station was established on Dauphin Island for the port of Mobile in 1882. It would ultimately be one of more than 100 designed to protect the United States “from the invasion of tropical diseases.” In 1907, an enlarged facility consisting of nine buildings was completed near Fort Gaines. The structures stood on pilings and were connected by 2, 000 feet of gangways.

Every foreign-flagged ship entering the Bay had to fly a red flag and check in with the station. A boarding officer reviewed the ship’s records and inspected passengers and crew for any sign of cholera, yellow fever, small pox, plague, typhus and leprosy. Anyone found to have symptoms of those dreaded diseases was taken off the ship and held at the station. If the officer discovered that there had been a suspicious death at sea the ship could be quarantined as well.

Quarantined ships flew a yellow flag and were prohibited from coming closer than four feet of a dock, and its moorings were fitted with special steel rat guards. If the case warranted it, the ship was evacuated and smoldering pots of sulphur filled the ship with toxic fumes. Crew members received baths while their belongings were fumigated and laundered. The ship was then thoroughly inspected, with the dead vermin incinerated. 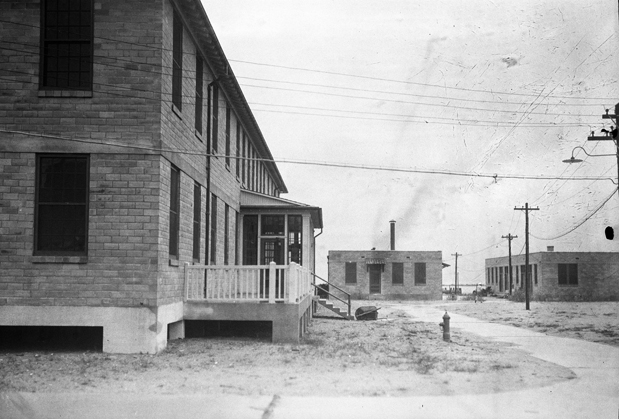 In stark contrast was the Detention Barracks, above left, and, in the distance, the Fumigation Building. All were covered with buff-colored brick and featured “nearly indestructible” construction.

In 1918, possibly prompted by the deadly flu epidemic, Senator John Craft successfully introduced a bill to set aside state property for a new quarantine facility. Ultimately a 50-acre site near Choctaw Point was obtained on an island created by more than 50 years of dredging operations and known as “Sand Island.” The Mobile Register lauded the move, dubbing it “Mobile’s Ellis Island, ” while speculating the port would be seeing a huge increase in passenger ships.

In 1925, construction began, thanks to a $300, 000 federal allotment. Due to the site’s vulnerability from hurricanes, the buildings’ massive foundations and concrete and steel construction were hailed as “practically indestructible” by one reporter. The main buildings were finished out in “buff face-brick.”

The station was fully operational by early 1927 and manned by a 12-person staff. The campus included offices, a 24-bed hospital for passengers, a sick bay for crew members, detention facilities for both, a fumigation station, laundry facilities and quarters for medical officers and staff. The property also held a garage, and a tugboat was provided for boarding ships.

After World War II, with major advances in medicine and sanitation, the importance of quarantine stations lessened. In 1950 Mobile’s station was closed, and the property was abandoned. Sand Island was renamed McDuffie Island to honor nine-term congressman and federal judge, John McDuffie (1883 – 1950).

Perhaps due to their “practically indestructible” construction, the ten buildings survived as their surroundings were converted into a huge coal export operation for the Alabama State Docks. Although deemed eligible for a listing on the National Register of Historic Places, the wreckers came in 1996, and today nothing remains of Mobile’s Ellis Island.