Eugenia Levy Phillips, a native of Charleston, South Carolina, came to Mobile as a 16-year-old newlywed in 1836. She had married fellow South Carolinian Philip Phillips, who prospered as an attorney before serving in both the Alabama legislature and as this district’s congressman between 1853 and 1855.

The couple lived in a Greek Revival mansion on Church Street, just west of Jackson Street. According to the 1850 U.S. Federal Census, the couple, their six children and four Irish-born servants all resided in the home. At the end of Phillips’ term in Congress, the couple remained in Washington, D.C., where he successfully practiced law and Eugenia became popular in the city’s social circles.

When the Civil War erupted, Philip sided with the Union and had strong ties with a number of men within the Lincoln administration. Eugenia, on the other hand, was just as ardent a supporter of the Confederacy. For this reason, troops arrived at their home one August day in 1861 and conducted a thorough search of the property but found nothing incriminating. Nonetheless, Eugenia was arrested for “Southern sympathies.”

Philip used his connections to get his wife freed and the family made their way to Richmond, Virginia, where Eugenia handed Jefferson Davis a stack of Union military maps and intelligence. He later credited these documents from Eugenia for the Confederate victory at Bull Run.

A Belle Meets a Beast

They continued on to New Orleans, which seemed safe from the growing conflict. Philip barely had time to establish his law practice there when Adm. David Glasgow Farragut arrived, and the city was placed under Union military rule.

Gen. Benjamin Butler, a New Hampshire native, was named military governor and soon found that while most of the men could be subdued, the well-to-do women were a different story. Such ladies took to exiting streetcars and even church pews if a blue-clad soldier entered. When Adm. Farragut had the contents of a chamber pot emptied on his head from an upper window, Gen. Butler issued the Women’s Order: Any woman not showing proper respect to a Union soldier would be considered “a woman of the evening caught plying her trade, ” and treated accordingly.

The outrage over this decree stretched from New Orleans to the floor of Britain’s Parliament where it was condemned. Gen. Butler’s unpopular decree earned him nicknames “Bluebeard” and “Beast.” His thievery as a war profiteer resulted in another nickname, “Spoons, ” for his supposed theft of silverware. Chamber pots with his image became big sellers. 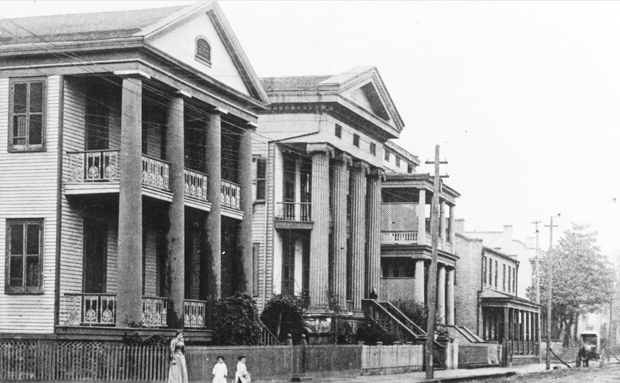 Eugenia and Philip Phillips lived in a Greek Revival mansion on Church Street (the second house from the left), two doors west of Jackson Street.

Eugenia eventually found herself under arrest when it was reported that her laughter could be heard from her open windows during a funeral procession for a fallen Union soldier. She claimed to Gen. Butler that her laughter had been directed at her child during his birthday party, not the funeral, and coolly stood her ground. The general, angered at her refusal to apologize, immediately banished her to Ship Island off the coast of Mississippi.

“It will have one advantage over this city, ” she told Gen. Butler. “You will not be there!”

For more than three sweltering summer months, Eugenia lived in a shack on the treeless island, swatting mosquitoes and eating “vile beans and spoiled beef” while listening to the taunts of Union soldiers. Gen. Butler expected her to beg for freedom, but instead she wrote her husband, imploring him not to intervene: “Let me rot where I am.”

When Gen. Butler realized that Eugenia was not going to repent and that international notoriety was turning her into a martyr, he quietly ordered her release — without notifying her family. When she reached her home, the startled maid thought the pale thin woman a ghost and slammed the door.

Since neither of the Phillipses would take an oath of allegiance to the U.S., it was not possible to remain in New Orleans. Philip arranged for passports, and, in October of 1862, the family boarded a refugee schooner which brought them to Mobile. After a visit to their former Church Street home, they continued on to LaGrange, Georgia, where they lived out the rest of the war. Philip practiced law and Eugenia worked at a Confederate hospital caring for injured and sick troops.

In 1867, Philip reestablished his Washington law practice and would go on to argue 400 cases in front of the Supreme Court before his death in 1884. Eugenia died in 1902 at age 81, high spirited and unbroken to the end.

Her nemesis, Gen. “Beast” Butler, $2 million richer, left New Orleans to become a Congressman and ultimately governor of Massachusetts. However, his political career ended with his being despised by Democrats and Republicans alike, forcing him to run — unsuccessfully — as the Greenback candidate for president in 1884. Butler died in 1893, and his Massachusetts grave lies behind two sets of high iron fences and perpetually padlocked gates.