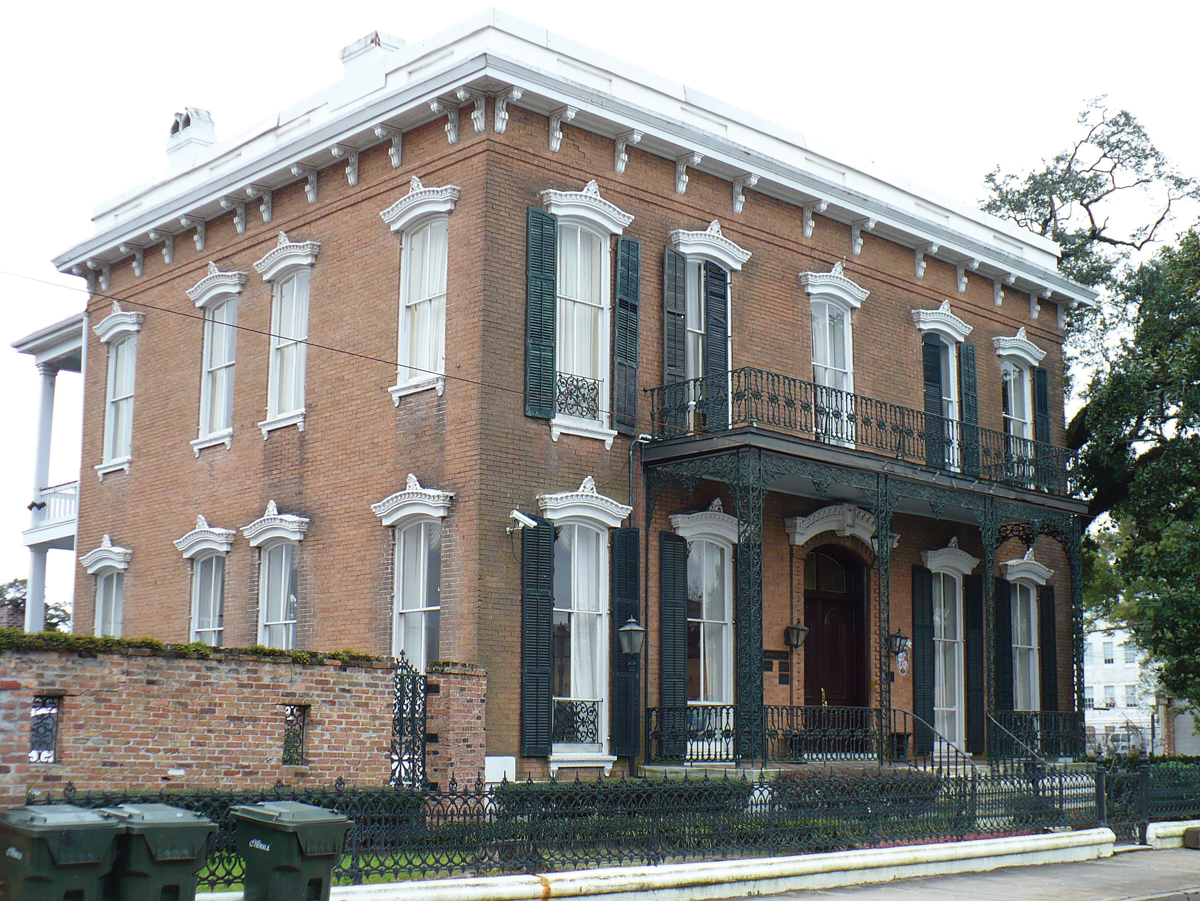 ABOVE The Ezell House, located at 407 Conti Street, was built in 1867 when the city’s and the South’s confidence was at an all-time low. Nevertheless, the grand building rose from the ashes of the Civil War and stands today as a shining example of historic preservation.

The impressive Italianate mansion standing at 407 Conti Street was constructed in 1867 by Martin Horst, a wholesale grocer whose firm advertised “French and domestic liquors, Western Lager Beer, Acme Pure Rye Whiskies, Tobacco and Cigars.” This German immigrant had arrived in 1855 and began his career as a bartender.

In January of 1868, Mr. Horst wrote his brother in Illinois, explaining that construction of the house had begun the previous spring and that he had already spent $26, 000 — some $7, 000 over budget. Horst was apparently quite optimistic for the postwar future of Mobile but had begun his project soon after the Reconstruction Act of 1867 was passed by Congress, calling for punitive policies against the defeated Southern states.

Horst’s letter read: “Trying times down here. No money, no business and none in prospect. Nobody knew such things would come to pass. Houses do not bring the value of their bricks this day. Such is the state of affairs all over the Southern states and will remain so as long as radical thieves rule this once happy country.”

Mr. Horst finally completed his home, and it was a showplace from the start. Its double parlors feature 18-foot ceilings with some of the most elaborate plasterwork in Mobile. An arch separating the two rooms is topped with images of Robert E. Lee and Stonewall Jackson, leaving no doubt as to the owner’s sympathies. A service wing to the south covers a wine cellar and connects to a brick courtyard with a coach house.

According to the 1870 federal census, the 41-year-old “Liquor Dealer” was residing there with his wife Apollonia, six children, two domestic servants — one of whom was French born — and three boarders. According to the census taker, Mr. Horst owned real estate worth $100, 000 and had personal property estimated at $50, 000. That was also the year Horst successfully ran for mayor of Mobile and, in that capacity, worked to improve the dismal local economy.

From Potential Parking to “Moon Gate”

Horst died in 1878, and the Mobile Register termed him “a good citizen, loving husband and kind father.” Horst’s family would hold on to the place until 1923 when it was sold to Kaheel Zoghby, a Dauphin Street merchant. After Mr. Zoghby’s death in 1959, the home stood vacant and deteriorated until sold to a local developer who applied for a demolition permit to make way for a parking lot in 1963.

The Mobile Historic Development Commission convinced the developer to pave elsewhere and worked diligently to find a buyer. Well into that decade, the organization held numerous open houses describing it as being “the finest residential architecture of its time.”

Carl and Dorothea Brady finally came to the rescue and restored the home. At the rear of the property, they installed a circular cast-iron “moon gate” in the brick wall, giving the house a new name and lease on life. In 1978, the house was converted into Bernard’s Restaurant by Bernard Guste whose family owned Antoine’s Restaurant in New Orleans.

Downtown Mobile in the late 1970s had hit rock bottom. The Battle House Hotel stood vacant along with countless former retail businesses. Bernard’s changed things. Young professionals flocked to its courtyard bar to listen to a jazz band after work and Mobilians once again came downtown to enjoy a fine meal.

Bernard’s lasted but a decade. By then, new development had begun to return to the area, and today, visitors and residents alike can enjoy a wide array of restaurants and bars where blight once reigned. By 1995, the former Horst house had been reborn once more as a law firm operating above an elegant events space. Now known as the Ezell House, this property is truly a preservation success story.