A revitalization effort is underway for the Mothers’ Army and Navy League Memorial at the intersection of Government Street and Airport Boulevard. The National Society of Colonial Dames in Alabama has taken on the project, which includes new walkways, landscaping, benches, a larger fountain with water features and better lighting.

The park was the idea of members of a group of Mobile women whose sons had served during World War I. Organized in 1917, the league met on a regular basis, while they sewed and knitted, to read letters from their sons overseas. They shipped the knitted items they created to men at army camps and soldiers stationed overseas. Locally, they looked in on the families of soldiers and sailors and provided them with meals and clothing.

When the war ended, league members kept in touch and, in 1924, decided to build a lasting memorial to Mobilians lost during the war. Many of their own sons did not return. After securing the triangular piece of real estate from the city, they sought $20, 000 for the construction of a memorial. To raise the funds, they sewed and sold hundreds of aprons and held countless dinners, card parties, dances and bazaars.

In March of 1926, a large crowd gathered in front of the white marble colonnade designed by architect George B. Rogers. Members of the American Legion took a prominent part in the ceremony. Boy Scouts, the mayor and local clergy all participated while the ladies of the league stood between the columns wearing flowing white veils. As a trumpet sounded taps, the names of those who had made “the supreme sacrifice” were read aloud.

The monument has two ornate bronze plaques. One briefly tells the league’s history while memorializing “the silent dead in tragic vaults of dust.” The second lists the Mobilians killed during the war — or at least many of them.

While the newspaper account in 1926 listed 62 war dead from Mobile, research found additional names, leading to the recent installation of a marker by the Alabama Historical Association. The names on both include a number of men from Baldwin County and even Evergreen and Camden.

Investigating the lives of the men memorialized reveals that they came from all walks of life, ranging from farmer to telephone operator to contractor. Many died in battle, but just as many seem to have died from disease. One died from “accidental gunshot, ” and another is listed as “MIA.” All seem to have been very young.

Two of the Navy dead were aboard the USS Cyclops when she disappeared in the Bermuda Triangle, while a third died when his transport ship was rammed by another in a storm. And Frank H. Beaufort, a Mobilian born in England, was a member of the British Royal Air Force at the time of his death. 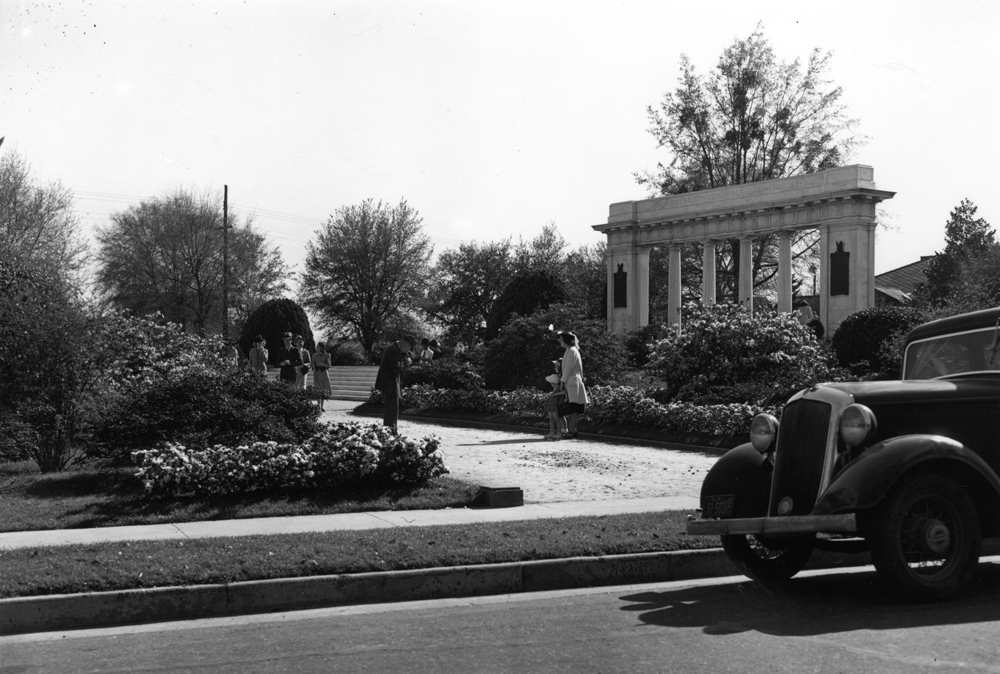 ABOVE This photograph, taken in 1936, shows the park 10 years after its dedication. To raise funds for its creation, a league of mothers sewed and sold hundreds of aprons and held countless dinner parties.

For many years after its dedication, the park was the setting for an annual remembrance of the war dead. In the early 1930s, it was one of several parks in town to be planted with azalea displays.

Despite the deaths of some 17 million people during the “Great War” of 1917 – 1918, the U.S. entered a second world war at the end of 1941. By its end, the death toll was triple that of the earlier conflict, and Memorial Park became little more than a stop on the Azalea Trail.

As the festivities surrounding the Azalea Trail peaked in the 1950s, the park became an important site. In 1956, the motorcade carrying Debbie Reynolds and Eddie Fisher stopped so that Mobilians could share a “Kodak moment” with the visiting celebrities. Generations of Azalea Trail Maids were photographed in their pastel dresses in front of the white marble columns.

Ironically, it was the mother of a recently returned veteran of the war in Afghanistan who noticed that the park was looking a bit tired and in need of some upgrades. Thanks to her suggestion and the work of the Colonial Dames, Memorial Park will soon experience a rebirth. Visitors to the park will enjoy a beautiful space and have a chance to discover the names of fallen soldiers who might otherwise be forgotten.

For information on how you can assist the project, email memorialparkmobile@gmail.com.