Daphne, Alabama. A moniker rooted in Greek mythology, but an identity steeped in Italian culture. Immigrants with names such as Luigi, Domenico, Guiseppe, Vittorio and Salvatore were lured away from coal mining communities in Illinois and Michigan by the temperate climate and affordable land along the Gulf Coast. They came to farm and build wealth for their families. In the process, they created a thriving community — thanks mostly to one man’s vision.

When Alessandro Mastro-Valerio founded Baldwin County’s Italian agricultural colony in 1888, a well-established Anglo community stretched along the bayfront. Today, talk to the many descendants of the area’s original Italian families,  and you’ll hear their ancestors’ stories of deprivation, hard labor and eventual success. 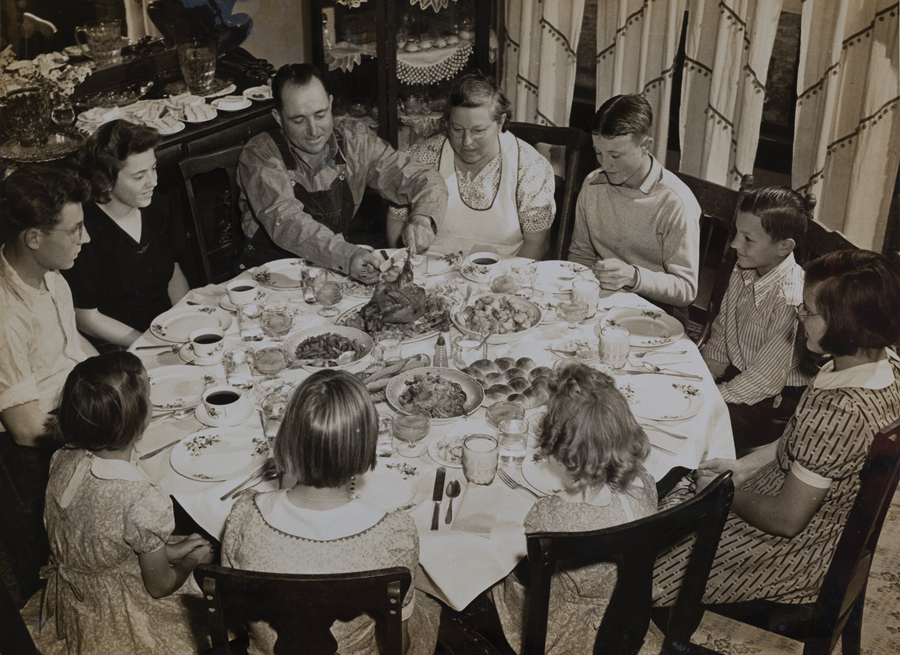 ABOVE In April 1941, Mr. and Mrs. A.V. Lazzari  gather with their children at the supper table, filled with roast chicken, string beans, baked Irish potatoes, cabbage, homemade rolls and more, all from the farm. From Mr. Lazzari’s right: Margaret, A.V. Jr., Barbara Ann, Lillian, Victoria, Alice, Louis, Angelo and Mrs. Lazzari. Not pictured, older daughter Mary who was away at college. USDA Photograph by Forsythe

In order to lure other immigrants to join him, Mastro-Valerio advertised the Bay area and its agricultural promise in Northern circulars and newspaper ads. The ploy worked. Many newcomers purchased 25- to 50-acre plots of land from Mastro-Valerio in and around what is now Belforest. One such man who bought in to the sales pitch was Francesco Manci, who had arrived at Ellis Island at age 14. After toiling amongst the  Michigan coal miners, he headed south to join the agrarian colony in 1897.

“The Italian immigrants wanted farmland. Francesco preferred the land around what is now Main Street, ” his granddaughter, Elizabeth Manci, says. “It was the area the previous immigrants didn’t want.”

The Bertagnollis were another of the first families. Susan McWhirter tells the story of how her great-great-grandmother and her siblings made their way south to Daphne from Europe by way of Illinois. “The three Bertagnolli siblings, Constanti, 12; Angelina, 14; and my great-great-grandmother, Teresa, 16, ” McWhirter says, “had traveled alone, walking from the Italian Alps, up through Austria and then through France. They worked in a match factory for a while in Austria, and when they got into France, they picked fruit. After landing at Ellis Island, they went to Coal City, Illinois, where they had relatives.”

McWhirter’s cousin, Al Guarisco, continues the story: “My grandfather was Vittorio Lazzari, and Giovanni Predazzer was his sidekick. One day, Giovanni tells Vittorio that he thinks he is going to marry Teresa Bertagnolli (McWhirter’s great-great-grandmother). And my grandfather says, ‘No, no, Teresa’s mine. You can have Angelina, ’” Guarisco laughs. “And that’s the way it worked out.”

Guarisco’s first cousin and Belforest resident, Louis Lazzari, says most of the Italian families were just surviving out there in the early years. They first had to clear the heavily forested land. Stumps had to be burned and dug out by hand before food crops could be planted. They built their houses out of lumber from the trees they cut. Land cleared and cultivated carried no guarantees of a productive harvest. “Francesco Manci came down here expecting conditions similar to his home in the region of Umbria. They planted a lot of vineyards. They got a very bad freeze, the way we do here about every 10 years, and it just wiped them out, ” Elizabeth says. “And so they swapped to potatoes and corn and made another go of it.”

As a child of 6 or 7, Louis says, his father Alexander helped sell any excess “eggs, butter and maybe some veggies. Whatever they had. He took that horse and wagon and went to Daphne, because most everybody lived on the Bay. I didn’t think to ask him how much money he brought home. Would it even be a dollar?”

The hard work and determination paid off. In his later years, Alexander Lazzari owned and farmed more than 500 acres. His younger brother Joe had around 700 acres. Those holdings were  dwarfed by the acreage amassed by some of the other immigrant families, particularly the Bertollas and Cortes that continue to farm today. 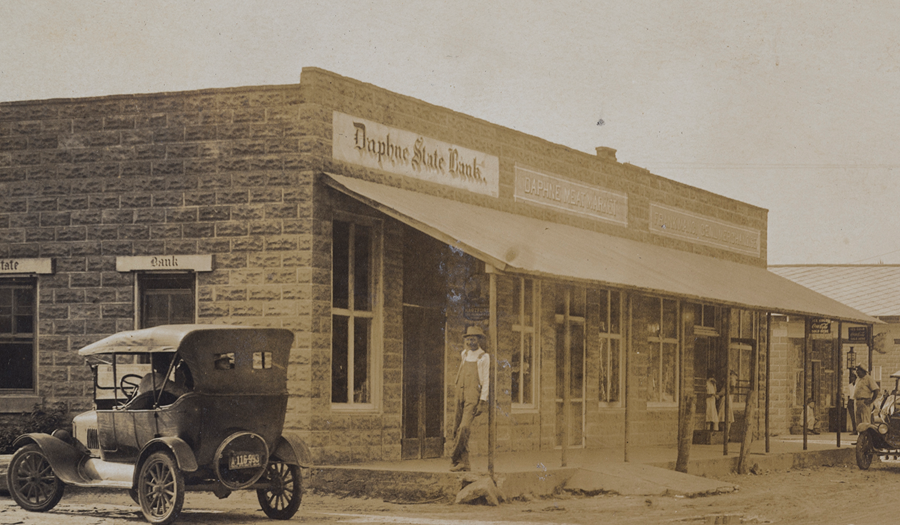 ABOVE When Daphne State Bank was founded in 1919, Italians dominated the list of stockholders: Corte, Trione, Manci, Allegri, Bertagnolli, Berga, Gentile and Pose. The bank was housed in one of Manci’s buildings (next to the meat market and general store). The next building housed Manci’s Service Station, which later became Manci’s Antique Club. Photo courtesy of Patty Trione Gipson
​

“A Brief History of Baldwin County, ” by L.J. Newcomb Comings and Martha M. Albers (first published in 1928), named Francesco “Frank” Manci as the Italian community’s greatest businessman: “To him it owes much of its early progress. In 1900, he put up a cotton gin. A year later … the first sawmill. The first store bore the sign, ‘Frank Manci, General Merchandise.’”

Frank Manci also was credited with shipping the first potatoes out of Baldwin County. “It was a big deal at the time, ” Elizabeth explains. “But the Cortes took it up to a much higher level — on a much larger scale.”

The Cortes as well as the Bertollas and Allegris built processing facilities on the rail line at Loxley, allowing them to ship local produce to major markets in the Northern and Northeastern states.

The Immigration Commission’s reports to the U.S. Senate for 1909 and 1910 included a table entitled “Economic history and present financial condition of certain typical South Italian families, Daphne, Alabama.” It listed coal miner as previous occupation for four of the farmers. The other had been a stonemason. It noted that, “None of the farms show any indebtedness, and the net value of the property now owned is in some cases several hundred percent more than the price of the [rough, uncultivated] property first bought.” La dolce vita, no doubt!