At some point, Carvel William “Bama” Rowell must have asked himself, “What’s a guy gotta do to get a free watch?”

When the Bulova Watch Company promised a timepiece to any baseball player who hit their clock looming above the right field fence at Brooklyn’s Ebbets Field, perhaps they didn’t think anyone would actually do it. But as Rowell, a left-handed hitter from Citronelle, stepped up to the plate in his Boston Braves threads on May 30, 1946, and rained a cascade of shattered glass into the outfield, he unknowingly inspired one of baseball’s most lasting silver screen images.

“I never got no watch, ” Rowell told a reporter at his Citronelle home in 1987, 41 years after pouring glass on the head of Brooklyn Dodgers right fielder Dixie Walker. Today, most people have never heard the name Bama Rowell. As far as the world is concerned, a man named Roy Hobbs sent that iconic home run to right field with his “Wonderboy” bat in Bernard Malamud’s classic novel “The Natural, ” later adapted into a major motion picture starring Robert Redford.

Bama Rowell’s numbers don’t leap off the stat sheet; during his six seasons playing professional ball, he was credited with 19 home runs and a .275 batting average. But there are some things that numbers can’t define. With one swing of the bat in Brooklyn,  Bama Rowell touched the soul of his sport with near anonymity, like autographing the bible of baseball in invisible ink. He’s not in the National Baseball Hall of Fame, nor is he in the Mobile Sports Hall of Fame, but we’d do well to remember him.

​Bama Rowell’s son Carvel Rowell Jr. is driving down a country road near his hometown of Thomasville when he answers my phone call. “Daddy would have turned 100 this past January, ” Rowell Jr. tells me. The former slugger died in Citronelle in 1993.

“Do you remember him telling you about the hawks?” I ask.

“Yeah, he used to tell that story. As a kid, I heard him telling these old stories but I’d run off. Of course, now I wish I had listened more.”

The story goes that in 1959, while playing for the minor league Minneapolis Millers, Rowell knocked a fly ball into center field. As the ball fell from the sky, it was attacked by two hawks, changing its direction just enough to avoid the waiting mitt of an outfielder. Reaching second base on the play, Rowell went on to score the game’s winning run.

I came to learn that Rowell’s baseball career is full of such improbable stories. The most wondrous part of all? It all started in Citronelle, Alabama. In a family of 10 children, Rowell stood out for his athleticism and rode that natural talent to LSU on a football scholarship. While in college, he was offered a baseball contract with the Boston Braves and made his major league debut in 1939.

“Even when he was older, ” his son says, “it was amazing to watch him pitch and bat. He was such an athlete.”

The wacky plays began piling up. In 1940, Rowell was on the winning end of a triple play, and in 1941, his three errors in one inning led to six Dodgers runs and a 6 – 0 loss (the Dodgers sealed the pennant with the win).

“Uncle Sam grabbed himself another major league baseball player today, ” reported the Sarasota-Herald Tribune in 1941. “Carvel William (Bama) Rowell of the National League Boston Braves has been ordered to report to his draft board December 4 for induction in the army.” Only three days after Rowell’s induction, the Japanese bombed Pearl Harbor.

Four years later, Rowell would return to major league baseball and his Boston team, and it was then that he found himself stepping up to the plate in the second game of a double header against the Brooklyn Dodgers. The Bulova clock unknowingly ticked away its final minutes.

The exact details of the ensuing hit have become blurred like an aged photograph. The time, day and even year of the play have been muddled and confused (Rowell himself told people he busted out the clock in 1940). The most reliable account places the incident on May 30, 1946, at 4:25 p.m. The ball remained in play when it bounced back into the outfield, resulting in one of the longest doubles in baseball history. Exactly one hour later, the clock stopped.

There’s little debate that Rowell’s double that day inspired the nearly identical scene in Malamud’s 1952 novel “The Natural, ” when the busted “clock spattered minutes all over the place.” According to an article in the New York Times, Malamud “was a native of Brooklyn who haunted Ebbets Field as a youth, and in ‘The Natural, ’ at least, his fiction never strayed far from fact.”

When the movie was released in 1984, it sparked a renewed interest in the origins of the now-iconic play. “Daddy was tickled by it all, ” Rowell Jr. says. “People would come over to the house to see him and send him letters asking for his autograph.” 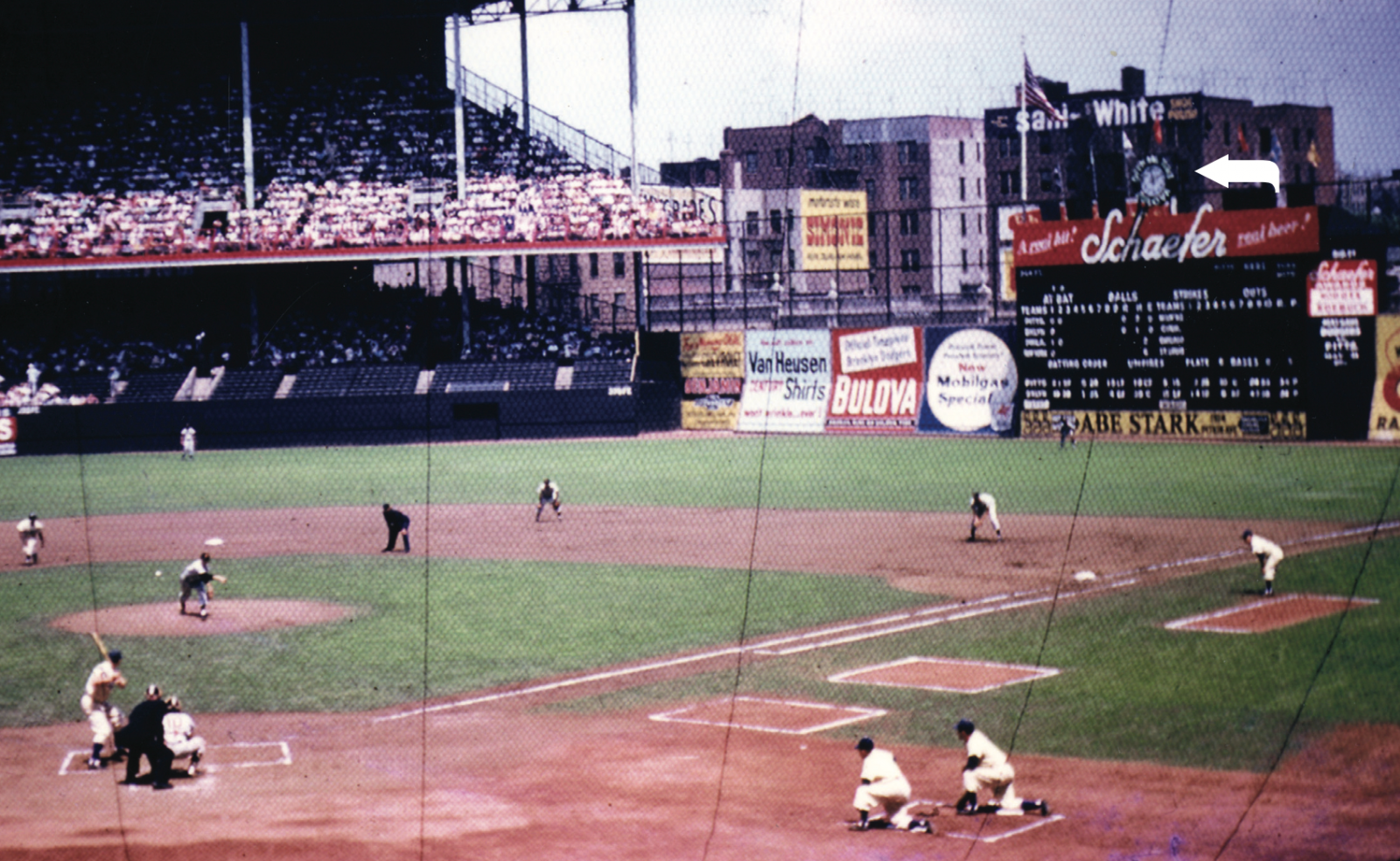 The view from behind the plate at Ebbets Field in Brooklyn, where the Bulova clock can be seen looming above the Schaefer beer sign in right field (indicated with white arrow).

Photo courtesy of the National Baseball Hall of Fame

​Rowell finished out his days quietly. After moving from major to minor league baseball, he retired and ran a pool room in downtown Citronelle, worked for the county and did a little farming,
but he never forgot that broken clock — or Bulova’s broken promise.

In 1987, a sports reporter named Bert Sugar set out to right Bulova’s wrong. In the presence of local news cameras and a Bulova representative, Rowell was finally awarded his watch on what is now known as Bama Rowell Day in Citronelle. Just 41 years late.

“Daddy was emotional during the ceremony, ” Rowell Jr. says. “More emotional than I thought he’d be. It was obvious how much he appreciated it.”

It’s also obvious how much his father means to Rowell Jr. “He was a fine father to me, ” Rowell Jr. tells me. “I can’t believe he isn’t in the Mobile Sports Hall of Fame.”

Maybe he has a point. If anyone takes the time to look past the numbers, they’ll see that Bama Rowell’s career was one of hijinks, mishaps, absurdities — and the occasional miracle. I’d like
to see Robert Redford do all that.

A special thanks to Citronelle municipal court judge and former Citronelle High hoops great John “White Shadow” Williams for bringing this story to our attention.