Oyster bar menus in metropolitan areas nationwide feature choice mollusks from the East and West coasts, and Gulf oysters are on their way to those menus, too.

“There are these high-end oyster bars out there that charge $2.50 per oyster, ” says Bill Walton, assistant professor at Auburn University and Alabama Cooperative Extension agent. “And one of the cool things about this market is they want a variety of oysters.”

That’s why, in 2009, Walton, a team at the Auburn University Shellfish Laboratory on the campus of the Dauphin Island Sea Lab and Bayou la Batre entrepreneur Steve Crockett began researching the possibility of farm raising specialty, name-brand oysters on the Gulf Coast.

“We have fantastic oysters here naturally, but there is huge variation in size, shape, saltiness and taste, ” Walton says. “They can be great oysters. But what if someone could farm them and guarantee consistency? Could we put an oyster out there that would show up on these fancy bar menus? We found that we can.”

Crockett says to think of specialty oysters like wine. A lot of factors determine flavors of wines – geology, geography, climate, grape species and more. Crockett and Walton say it’s the same way with oysters. “With wine, you have a terroir, ” Crockett says. (This is the notion that the traits of the land influence the taste of the food produced on it.) “Well, with oysters, we have a merroir. The flavors are going to be different based on the characteristics of the water – the temperature and nutrients – and husbandry practices.”

“I swear, you really do taste differences, ” Walton says.

Crockett’s oysters, which are already being sold in restaurants across the southeast and even at high-end grocery store chain Whole Foods, are being marketed as Point aux Pins oysters, named after the small peninsula on the eastern boundary of Grand Bay.

“Our water has excellent nutrition for the oyster. There are natural oyster reefs out here, ” Crockett says. “We don’t have any rivers running in, but we do have runoff from uplands that runs along the marshes. And, we don’t have any agricultural runoff so there are no pesticides and fertilizers coming in. It’s green and sustainable. Nothing is added, and we’re not having any impact on the natural stock.” 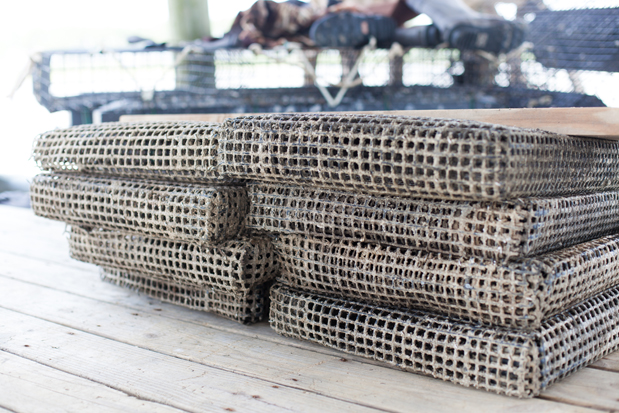 Crockett uses the Australian longline method to raise his mollusks. Placing them in cylindrical mesh containers along lines that hang above the water prevents mud and predators from harming the organisms. When the baskets are dropped into the water, they don’t actually touch the seafloor. This method is helpful in protecting the oysters from debris and strong currents during hurricane season.

Through Walton’s research, Crockett determined the best way to raise his oysters was the Australian longline method. At the beginning of each season, Crockett obtains thousands of tiny juvenile oysters from the shellfish lab, and they are placed in cylindrical mesh containers attached to lines that hang above the water. The containers are dropped into the water, but not all the way to the seafloor, which keeps them out of the mud and prevents predators from feeding on them.

This system also provides protection for the oysters during storms — when the water gets rough, the containers can be lowered to avoid debris and strong currents. Crockett says his oysters were just fine during Hurricane Isaac in 2012.

The Australian longline method also allows Crockett to pull the oysters out of the water to kill anything growing on them, creating a smooth, beautiful shell. “The trick is you’re giving them an extra-long low tide, ” Walton says. “It dries up the outside of the shells and kills off barnacles and things. You can grow an oyster that, after a year and a half [in the water], is beautiful and ready to go to market after being rinsed with a garden hose.” The oysters also have thinner shells and deeper cups than traditional Alabama wild oysters because they roll with the tides in the containers. 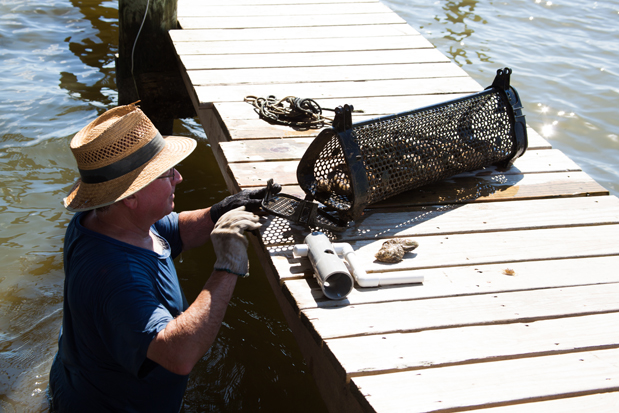 Although Crockett is the first to market his farm-raised oysters, he won’t be the only one for long. The staff at the shellfish lab is currently training nine people who are considering becoming commercial oyster farmers. “The guys at the shellfish lab are claiming that a couple could certainly operate a 1-acre lease and make a living at it, ” Crockett says. “They could run it as a family, part-time.”

The program provides hands-on training to participants to give them real-world experience with what it takes to farm oysters. With this training and experience, the trainees will have the option of establishing a commercial farm in 2-acre plots adjacent to the training area in Portersville Bay along the western edge of Mon Louis Island. There is room for up to 16 two-acre commercial farms at this site, and if participants commit to growing oysters after the training period, they may market their oysters as a niche product, like Crockett.

Brent and Rosa Zirlott, of Irvington, are full-time shrimpers, but they are thinking about getting into the farm-raised oyster business as well. “We just thought this was interesting, ” Rosa says. “A lot of people we know are skeptical about it, but we think once people try it and it is a success, that will make others want to try it too. We’re just coming in at the ground floor, and we’re going to see how it goes.”

The beauty of the name-brand oyster market is that customers want variety, which encourages more people to raise oysters in different areas along the Gulf Coast without affecting the wild oyster market or Crockett’s existing business, Walton says. “This might be a case where a rising tide floats all boats, ” he says. “This is not intended to displace the oyster industry we have. This is just adding a niche product.”

Crockett has also talked with the owners of Fairhope Brewing Company about creating an oyster stout. Walton says he is excited to see Gulf oysters break into the specialty market and for restaurants across the Southeast to begin offering premium bivalves from all over the country. “The Southeast is ready for this, ” Walton says. “Folks love food, and they really love local food.”

Want to see if oyster farming is for you? Check out the requirements.