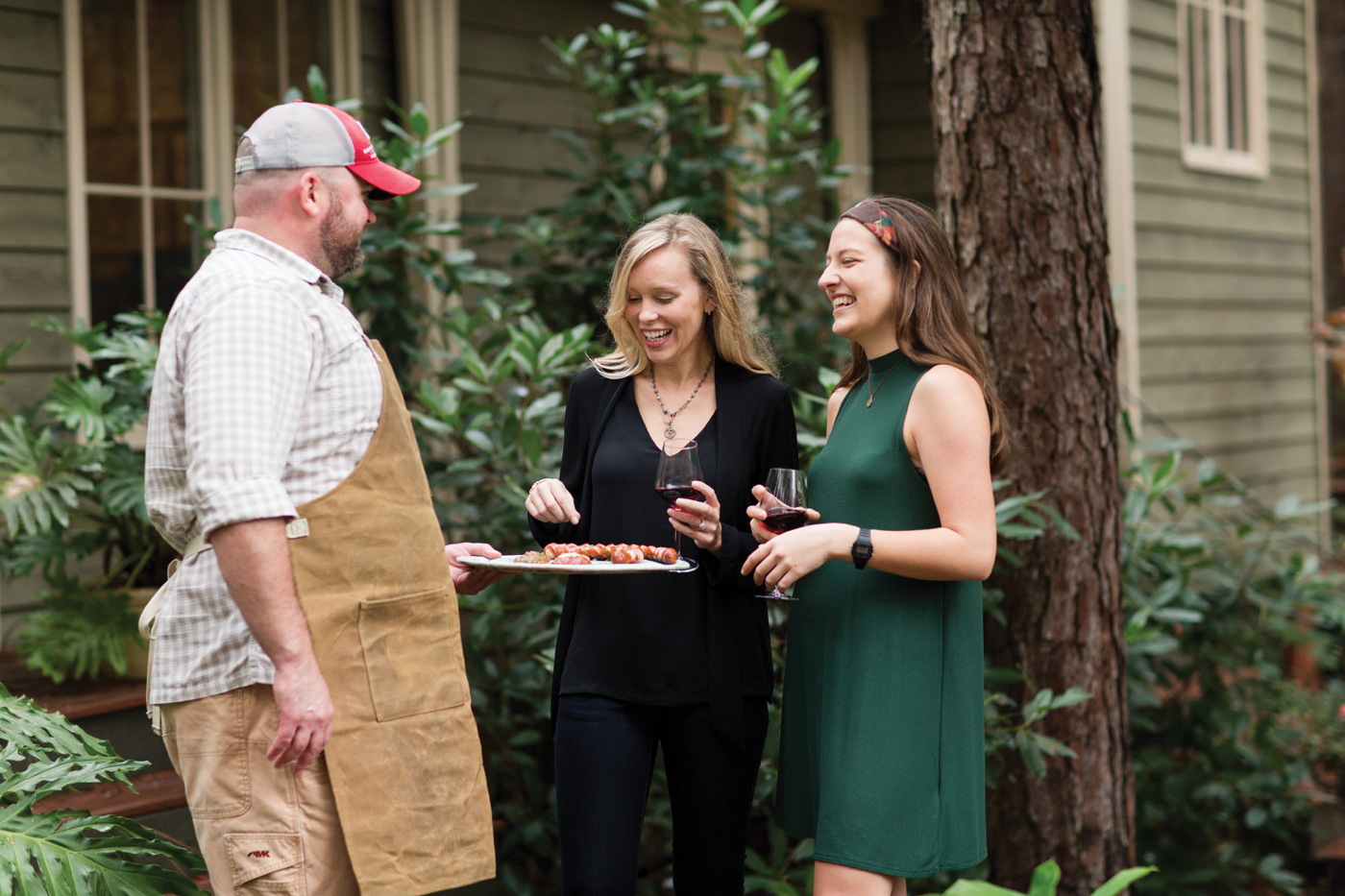 ABOVE Chef Fosgate offers a taste of farm-to-plate living to the Walcotts’ daughter, Virginia, right, and Rebekah Webb, who contributes to the design and marketing for Windmill Market and Walcott Adams Verneuille Architects.

A Renaissance man is defined as someone who has acquired profound proficiency in more than one field, and there is no better local example than Mac Walcott: architect, entrepreneur, farmer and leader of the local food movement. While finishing his architecture degree at Tulane, he was already scheming to start a working farm. In 1983, he planted 25, 000 tomato plants on five acres he owned beside Fish River, in Fairhope, while also running a small architecture firm in Mobile with new bride and fellow architect Gina. “It’s a good way to test your new marriage, ” he jokes. But Gina has always been supportive of Mac’s big, if not a little harebrained, plans and schemes. And those plans — except the tomatoes — usually work out. “I got discouraged after a few crops of tomatoes and some watermelons. We moved into sheep and goats to keep the pastures under control. I guess things just evolved from there.”

Fast-forward a number of years, and the Walcotts found themselves with three wonderful kids and a booming architecture firm known as Walcott Adams Verneuille that is widely credited with influencing (for the better) the look of Fairhope and Point Clear. Mac was still dabbling at the farm and, in 2009, was ready to get serious about “critters, ” as he calls them. The whole family trekked to South Carolina for a load of Australian Lowline Angus cattle, a heritage breed that is smaller than standard Angus and produces high-quality meat on pasture. Raising cows led to pigs and turkeys at Thanksgiving. Mac poured himself into every aspect of the animals — their feed, husbandry and processing of meat — while plenty of antics ensued. Bulls jumped fences, cows abandoned calves, predators wiped out whole flocks of chickens, and Mac was called home from his architecture work more times than he can count to bottle-feed or round up loose animals. Turns out, architecture is a whole lot easier. But when it comes to the farm, Mac is hooked. “I just love it. The dirt, it’s my hobby.”

Walcott is a part of a growing number of people who are giving farming a try once again. “If this farm were a thesis or experiment, I would show the numbers that small farming can work, that it can be financially viable, ” he says.

Overall, the rural population is shrinking for the first time on record, in part due to a trend in urbanization and a decrease in farming, a statistic that Walcott hopes can change. 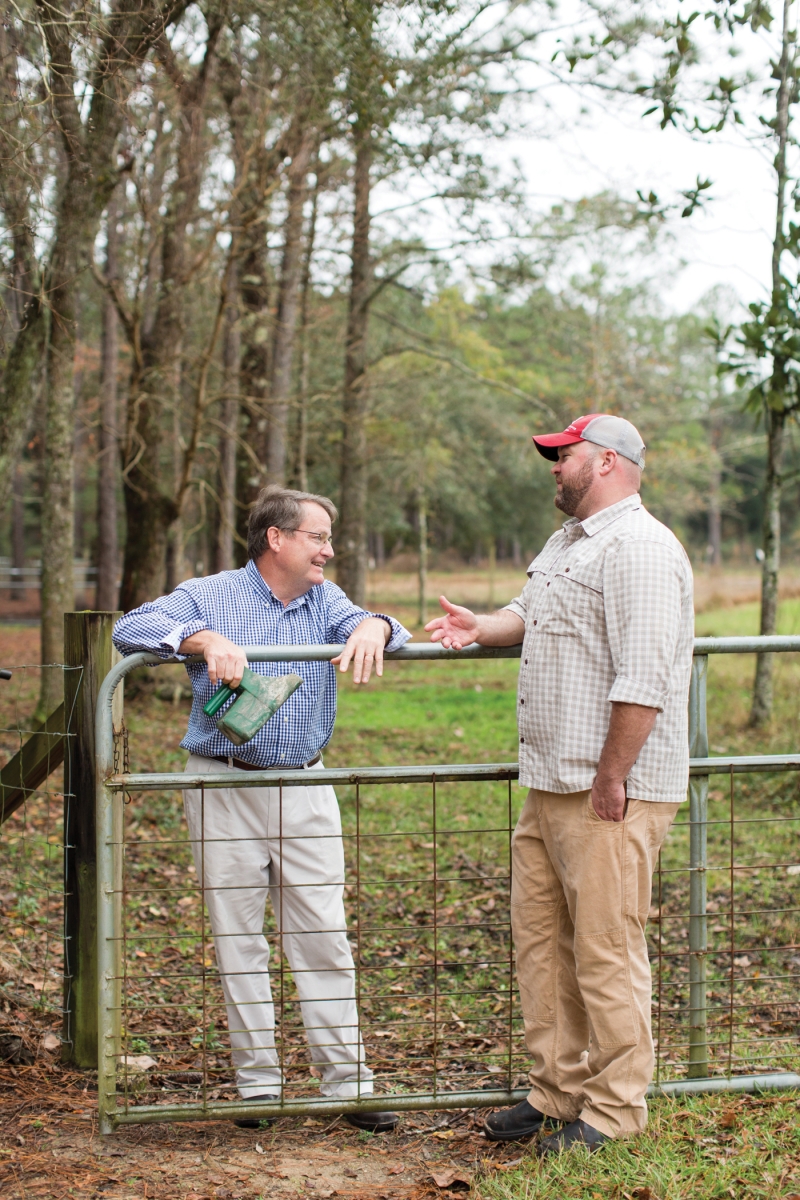 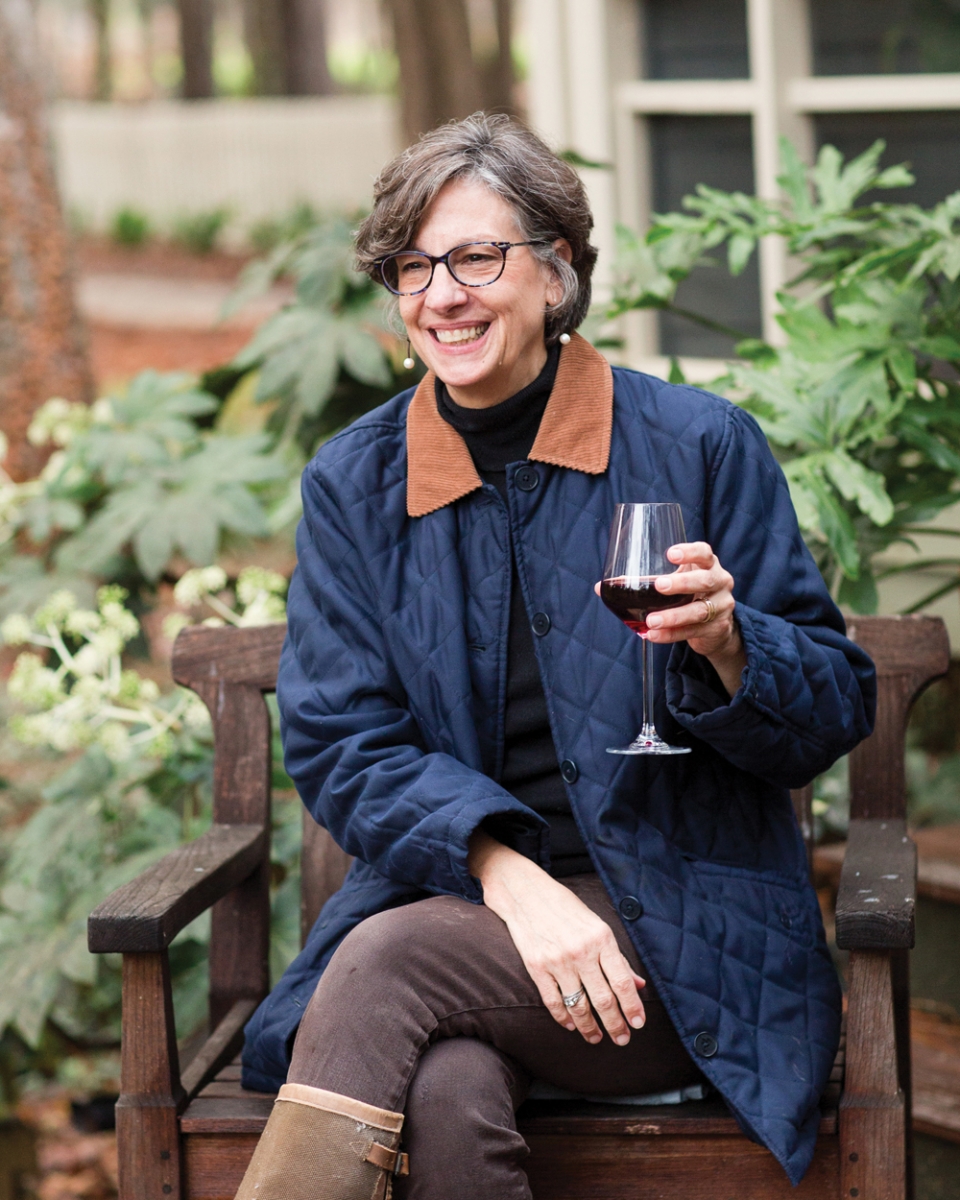 ABOVE LEFT Mac Walcott, left, and Chef Patrick Fosgate chew the fat over how to get quality meats from small farms to restaurant kitchens.

ABOVE RIGHT Gina Walcott savors a glass of wine on the back porch of Big House Farms, a home and working farm that she and husband Mac designed together.

When the housing crisis hit and there was a lull in new construction, the Walcotts turned their attention to a large building they had listed in downtown Fairhope. “Instead of letting it sit vacant, we decided to make it a community space, ” says Gina. “The Windmill Market was created to bring together small farmers with the local consumer. It was also a wonderful chance to showcase our green building initiatives, show people technology they may have never seen firsthand.” Mac began selling his pastured pork and beef at the market and continues to expand his offerings. This year alone, he will process almost 2, 000 pounds of meat at USDA facilities in Lucedale, Mississippi. The products are sustainable, traceable and downright delicious.

“We’ve learned a lot along the way, ” Mac admits, including what is important to his customers. After one woman was so passionate about knowing the source and quality of the grain fed to her Thanksgiving turkey, Mac took a hard look himself and began experimenting with growing his own grain. “I have a miniature combine, because none of the big guys will bring theirs over for just a few acres.” He mixes his own feed with whole grains and roasts soybeans in a repurposed cement mixer set over a burner. “Soybeans smell amazing when toasting, ” he says.

These animals, you might argue, have a better life than many backyard pets. “I enjoy watching things grow: pigs, flowers, plants. It’s the most amazing thing in the world to me. They grow just by themselves — the miracle of life!”

Walcott partnered with Chef Patrick Fosgate on custom spice combinations to season his smoked link sausages, and invited MB by to taste the fruits of his labor. This Renaissance man experiments in ways that certainly please the palate.

1. Melt butter in a medium saucepan. Add flour and cook for 1 minute until it forms a pale roux. Whisk in milk 1/2 cup at a time, until thickened. Slowly simmer for 3 minutes.
2. Whisk in beer, Dijon and spices and return to heat. Gently fold in the cheese and keep on low heat until melted and bubbly. Makes 2 cups.

1. Preheat oven to 350 degrees.
2. Cut squash in half and scoop out the guts and seeds of each half. Lightly rub each side with olive oil and season with a pinch of salt and pepper. Lay the squash flesh side up on a baking sheet.
3. Place whole sweet potatoes on a separate cooking sheet and place both pans in the oven for about 40 minutes to an hour or until vegetables are soft. Remove from the oven and let cool. Remove the flesh from the squash and potatoes and set aside.
4. Melt butter in a 2-quart saucepan. Add onion and cook until translucent and soft. Add garlic and cook for another minute.
5. Remove the pot from the heat and add the flesh of the squash and potatoes. Add the stock, thyme and pumpkin spice. Return to heat and slowly simmer for 15 minutes.
6. While the soup is simmering, brown the sausage in a skillet and set aside.
7. Puree the soup with an immersion blender until smooth. Stir in the cooked sausage and lemon juice, and season to taste with kosher salt and white pepper. If desired, finish the soup with cream to add richness. Serves 8 – 10.

This dish works well for a hearty weekend brunch. Pair with fruit and a homemade biscuit. For a comforting dinner, add a side salad.

1. Preheat oven to 400 degrees.
2. Heat 1 tablespoon of olive oil in a large skillet over medium-high heat. Add the sausage and cook, stirring, until the meat is browned, about 4 minutes.
3. Add onion and red pepper. Cook, stirring, until translucent and soft, about 5 minutes. Stir in garlic, salt and black pepper. Remove from the heat and let cool to room temperature.
4. In a medium-size mixing bowl, combine 2 tablespoons of olive oil, breadcrumbs, parsley, cheese and Creole seasoning. Mix well. Add the sausage mixture and mix well. Add stock to the breadcrumb-sausage mixture and mix well.
5. Grease the bottom of a 10-inch casserole dish with the remaining 1 tablespoon olive oil. Arrange the shrimp in one layer in the bottom of the pan. Cover shrimp evenly with the breadcrumb-sausage mixture, packing it firmly down onto the shrimp.
6. Bake on the center rack of the oven until the top is golden brown, about 30 minutes. Remove from the oven and serve hot. Serves 8 – 10.

In the Kitchen with Mary Alice Cain

ABOUT US
Mobile Bay Magazine is the premier lifestyle magazine for Mobile and Baldwin counties. It has been in publication for more than 45 years, covering topics such as food, fashion, art, local history and events. Read more ...
FOLLOW US
© 2021 PMT Publishing