Tom Spyrka leads a life not unlike most retirees. He visits his grandchildren when he can. He keeps his front yard neatly manicured and his backyard full of broken-down toys to tinker with. Next week, he is attending his high school reunion in Florida. “Fifty years, ” he says, shaking his head. And when I ask what he’s been doing this morning, he replies with what could pass for the AARP motto: “Just piddlin’ around.” Five eggs are boiling on the stove, destined for chicken salad. All is normal, expected even.

Behind this Semmes ranch house, however, the expected takes a turn for the eccentric.

Spyrka is a member of Mobile’s little-known pigeon racing society. Inside two wooden coops beyond the edge of his pool, nearly 50 pigeons twitch and coo and flutter in their perches. The birds resemble steroid-injected versions of their downtown relatives — taller, chestier, somehow more self-assured. They have no names. Instead, each bird wears a leg band with a unique tracking number. “Pets, not pests, ” Spyrka, 65, insists.

He shows me his organization’s monthly newsletter, a mailer with the upcoming schedule and the minutes from a previous meeting. “That guy right there is the promotional director, ” he says, pointing to his name at the top of the page. “All I’ve ever really done is arrange for a booth at the flea market. We put some birds on display, but it never got anybody to join the club. We always seem to hang around seven, eight, nine members.”

Spyrka joins the others a few Friday nights each fall and spring to load hens and cocks into a specially designed truck carrier. The pigeons are transported hundreds of miles up Highway 45 into Mississippi, north of Meridian, to crossroads with names like Artesia, Shannon and Hinkle Creek. Weather permitting, the cages swing open 30 minutes after legal sunrise.

Back in Semmes, while the rest of the state rolls out tailgate parties and tunes in to “College Gameday, ” Spyrka saunters into his backyard to what he calls “the command center.” There, underneath a shady pergola in his favorite lawn chair, he sips Miller Lite and waits for the birds to come home. 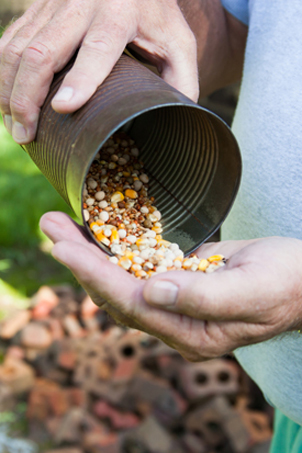 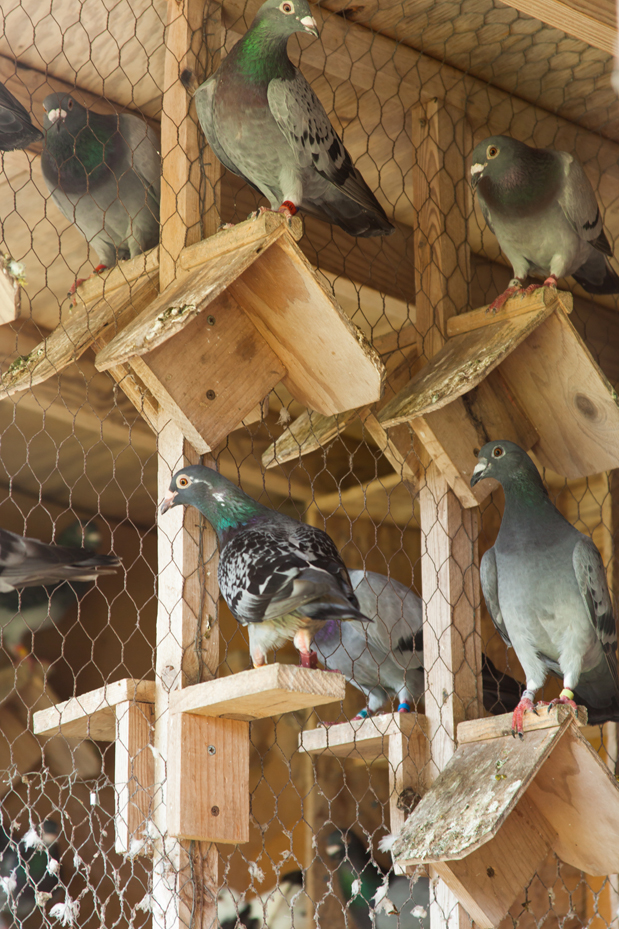 Members of the Mobile Racing Pigeon Club will donate some pigeons to any newcomer who shows enough interest and builds a bird-worthy coop. Spyrka says each of his racing pigeons eat about an ounce of feed per day, while some racers use lettuce or other secret foods to fuel their birds.

The Mobile Racing Pigeon Club meets the first Monday of every month at the Golden Corral in Tillman’s Corner. Over fried pork chops, fried okra and fried rice — sometimes on the same plate — nine fanciers, or breeders, and one prospect discuss nothing but pigeon racing. Tonight, alongside Spyrka (or “Sparky, ” as he’s known in the club) sits secretary Harry Benson. To his left is Fred Davis, the club’s 74-year-old president.

“Let me get my ice cream and we’ll start, ” Benson says after 45 minutes of casual pigeon talk. The monthly meetings serve the same function that Internet forums provide to younger, less social generations. Members quiz each other about avian behaviors they’ve noticed, vaccines they need and articles from the latest issue of The Racing Pigeon Digest, “the thinking person’s journal of racing pigeons.” (This week, everyone read about the British racing bird which alit onto a Royal Navy frigate 300 miles into the Atlantic. The pigeon was ultimately reconnected with its owner.)

Newcomer Bob Hodges eventually gets around to the question all newcomers ask: How do the pigeons return from where they came? Spyrka shifts in his chair. The table quiets down. “You want to take this one, Harry?” he asks. Benson clears his throat and ticks off the theories proposed by scientists and laymen. Some say the birds can analyze magnetic north, or that scents lead them home. Hodges mentions that someone once told him a pigeon can always hear the oceans. The truth is no one knows how they do it, and even if they did, the fanciers just don’t find the “how” question all that important.

What they do know is why pigeons come back. And for that, Spyrka has no notions of vanity. “Oh, the birds don’t care about me at all, ” he says. “They’re dumb as rocks. They just want to eat,  be with their mates and stay in their perch at night.”

“It’s not like a chicken. When a chicken comes out of the egg, it’s running. When a baby pigeon is born” — Spyrka slumps his head onto his shoulder and curls his arms up like a Tyrannosaurus Rex’s — “it just lays there.”

After about six weeks of ingesting mostly “crop milk” produced by both parents, a squab is ready to eat seeds on its own. Spyrka becomes the acting father, continuing a sporting tradition described on Mesopotamian tablets more than 5, 000 years ago. He moves the babies into the coop for “young birds, ” pigeons that are born within this calendar year which run their own “young bird” races. Adjacent to that is the “old birds” coop, for pigeons aged 1 year and up. Spyrka says birds can often race for up to 7 or 8 years. Some of his pigeons go their whole lives without touching earth.

Training starts when Spyrka drives the pigeons to
the end of the street and releases them. With little hesitation, the birds should return to the coop. “After that, I’ll take them to the school, ” he says, signaling in the direction of Mary G. Montgomery. “I’ll take them to the golf course or industrial park. A lot of times they beat me home. Then we go to Citronelle. Once you’ve got them trained for 50 to 60 miles, coming back at a pretty good clip, they’re ready to race.”

The bands on the birds’ legs house an electronic chip, and when the pigeons re-enter their coop after the race, they strut over a pad which beeps like a grocery scanner and records the times. Spyrka estimates 85 percent of his pigeons return on race day, with most of the rest straggling in over the next 48 hours.

The next day, the participants unplug their Benzing electronic timers and congregate at Davis’ house. There, they analyze the results. The winner is not determined by whose bird arrives home first, as each fancier’s flock travels a different distance home. Instead, the birds’ velocities are figured and ranked. A winning speed typically ranges from 20 mph to 40 mph, depending on the wind. Ever since the club ran out of money for trophies, winners get printed certificates. 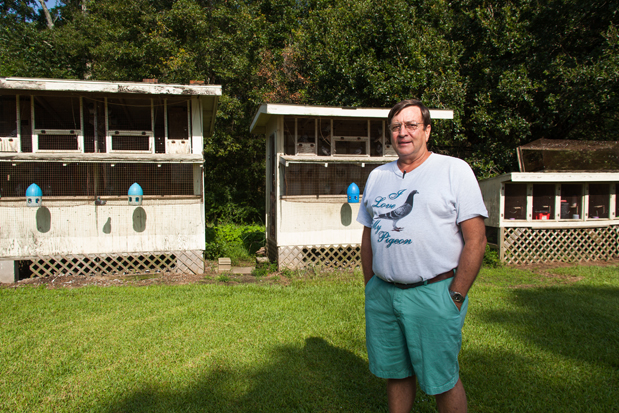 Spyrka, seen here in his backyard in Semmes, won the club’s “Best New Member Award” in 1996.

Most of the fanciers came to the sport in similar fashion: as children, sneaking a few wild birds from the nest. Spyrka, who grew up in Hempstead, N.Y., was inspired by the pigeon racers on each side of his Polish family to climb into a coal silo and nab a few baby birds for his backyard. Club president Davis’ experience mirrors Spyrka’s, except that he grew up in Philadelphia, Miss., and remembers stuffing the fledglings down his shirt as he snuck out of nearby cotton gins. The club was started by men older than these, since gone, shortly after World War II.

“So many men who came home from the war had racing pigeons, ” Davis says. “For our age group, as kids, that’s how we were exposed to them. Then my brother got me some when I was a teenager, and I always said that when I got older I’d get some again.”

A few club members tell different stories. Glen Dyer, the newest member who couldn’t be beat last season, lost his wife to cancer in 2003. For some peace, he turned to racing pigeons, birds that mate for life. Hollis Sylvester raced birds as a 9-year-old in Trinidad and Tobago where, he says, the sport was as common as soccer or cricket. Decades later, “Sly” was working 50 miles off-shore in the Gulf of Mexico, hauling crude oil from Houston to Panama, when a lost pigeon took refuge on his ship. He cared for the bird and, in his efforts to contact its owner, discovered the Mobile Racing Pigeon Club.

When asked what brought him to the meeting at Golden Corral, potential member Bob Hodges embarks on a tale that starts with being bitten by his neighbor’s dog. He also mentions seeing some birds on display at the local flea market.