Transport yourselves back into the early 1830s. The Catholics met in a building described by a seminarian as a “poor barn” in which “it was impossible to say mass when it rains.” A mixed bag of Protestants met in a small wooden building at the corner of Church and St. Emanuel streets. The Jewish congregation met in members’ homes and would not start its first temple until a decade later.

The structure of first importance in any colonial town, a fort to wall out violent neighbors, had been built, served its purpose during the 18th century, and then torn down. The second, a jail, to wall in violent kith and kin was in operation. It became clear: Permanent houses of worship were necessary to address the more refined need of mankind. Questions quickly arose amongst each congregation. How will a cathedral, church or synagogue function? How will it look? How much will it cost? In answering those questions, early Mobilians created a magnificent segment of the architectural patrimony of our state and city.

Most of the Mobilians involved had arrived fairly recently after Alabama became a state, and they had brought with them their tastes in music, literature and architecture. Therefore, there was no radical departure from the places from whence they came. Normally, what the congregations and their architects created was part of a continuum of the styles and decorative elements of the buildings in their previous homelands.

What do all of these buildings have in common? They are the products of a felicitous interaction of those two diverse forces that must be present in the creation of a successful building – a mature, experienced and responsive architect and a sophisticated and demanding client. The fruits of their collaboration bear the imprint of the character of each.

The Cathedral-Basilica of the Immaculate Conception

In my judgment, the Cathedral-Basilica of the Immaculate Conception is the exception that proves the rule. This is by far the most knowledgeable and sophisticated building, both aesthetically and structurally, that was built in Alabama, and possibly in the Deep South, in the 19th century. The records indicate that a French seminarian named Claude Beroujon was the architect. He gave up his clerical pursuits and is listed as a carpenter in 1837, when the foundation of the structure was started. By 1851, when the building was usable but not complete, he was an architect.

Architectural academics label this style as “Neo” or “Romantic Classicism.” It developed in England in the late 18th century and was brought to the U.S. by books and an English architect-engineer named Benjamin Latrobe. In much simplified versions it became what is now known as the Federal style. Latrobe became a friend of the architect-president Thomas Jefferson and did considerable work on the U.S. Capitol. But Latrobe is best known for the Catholic Baltimore Basilica, America’s first cathedral, started in the early 19th century (built between 1806-1821). It is similar in many ways to Mobile’s cathedral: the twin towers and the windows spanned with arches, not flat lintels. The Catholic archives state that twice in the 1830s, the local owner requested plans from outside sources. In view of the similarities, one cannot help but wonder if these sets of plans were of Latrobe’s Baltimore Basilica. 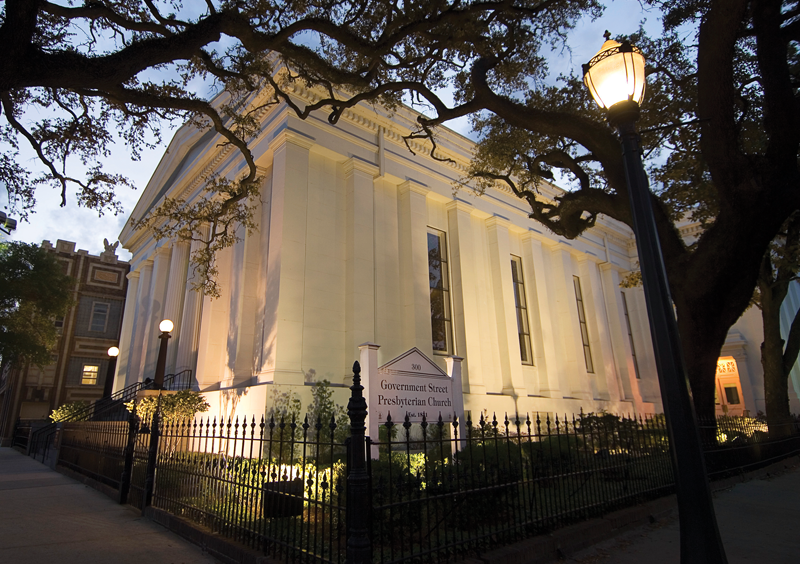 About this time, an architectural expression burst on the American scene like a salvo of rockets and created what has been termed the first truly national architectural style:
Greek Revival.

It started in England when a pair of young architects, James Stuart and Nicholas Revett,   visited Greece, fell in with some archaeologists, measured ruins, and then went home and published a book. Later, the book crossed the Atlantic at a time when America was in love with the idea of the democratic Greek city-states, naming their villages “Troy” and “Athens”, “Corinth” and “Syracuse.”

A New York carpenter-turned-architect named Minard Lafever studied the Stuart-Revett book, and perhaps others, and then wrote and illustrated two pattern books of his own. In them, he simplified Greek architectural elements in such a manner that the American craftsmen could reproduce them. The result was an architectural vocabulary of great strength and beauty.

In 1834 two talented young architects, James Gallier and Charles Dakin, were working with Lafever in New York. Competition was stiff and they decided to move to New Orleans where construction was booming. On their passage down they learned that New Orleans was suffering from yellow fever — so they left their ship in Mobile and decided to practice there until conditions in New Orleans became more salubrious.

The church is the Government Street Presbyterian Church. Roger Kennedy, who served as Chief of the National Park Service, wrote in his volume “Greek Revival America” that it is “candidate for America’s most beautiful Greek Revival Church.”

Its plan is a simple rectangular room with the pulpit as the focal point. The pulpit is framed and emphasized by a heavy entablature, supported by massive battered pilasters. The coffered ceiling, run diagonally, is a unique design expression — indicating that the architects were capable of producing outstanding, innovative designs. There is no stained glass, nor a center aisle to distract parishioners from the spoken word of the minister. 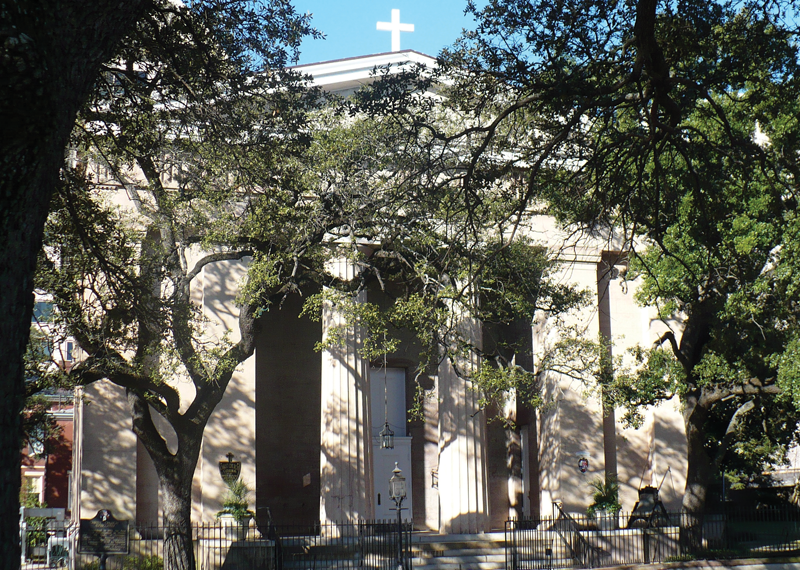 The early wooden Protestant church, Union Church, only two blocks away, had been acquired by the Episcopalians. During a well-attended service, the floor collapsed so it was time to rebuild in the latest style. Architect Cary Butts was selected, and he designed this building also much influenced by pattern books.

These differences were brought on by ecclesiological changes, a natural disaster and shifts in architectural vogue. The theological changes were stimulated by what is now known as the Ecclesiological Movement. In the 1830s, the Church of England, in an unlikely alliance with the Roman Catholic architect, Augustus Pugin — the chap who designed the British Houses of Parliament — started a counterreformation against the 18th century drift towards evangelism. He championed the reemphasis of the liturgy. Architecturally it meant, according to Pugin, the rejection of Greek- and Roman-inspired elements, which he labeled “pagan, ” and the return to the style created by the Christian Church of the Middle Ages to satisfy the functions of its service, the Gothic. So at Christ Church in the late 1850s, an addition was added to the rear end of the nave. The staff and vestry occupied a large part of the space, but an opening was cut in the rear wall and a niche created for the cross. The seating was changed and a center aisle established for processionals. This was the start of Pugin’s recommended chancel.

In 1906 a hurricane blew the steeple down into the nave. During hurricane repairs, the wall between the nave and the 1850 addition was removed, and the 1850s wing became part of the church itself. This recreated the medieval division — the nave for the laity, the chancel for the clergy. The cross on the altar at the rear of the chancel was now the focal point.

The Greek Revival interior had been destroyed by the falling steeple. It was reconstructed in the popular Beaux Arts style of the day. Through the years, it was adorned with superb stained glass windows, some of them by Tiffany. This would have pleased the ecclesiologists who preferred the subdued and inspiring scenes of stained glass over the open lightness of the previous century.

The effects of the Ecclesiological Movement spread. Certain architects, anointed, so to speak, by the New York Ecclesiological Society were sent forth to build ecclesiologically correct churches. Two Englishmen, Frank Wills and Henry Dudley, came to Alabama. They designed the Church of the Nativity in Huntsville, St. Johns in Montgomery, and Trinity in Mobile. Trinity is a magnificent example of exactly what the ecclesiologists had in mind. It is very similar to St. Osbert in Liverpool — the building designed by Pugin himself that triggered the
Gothic Revival. Inside, the exposed structure accentuates, through its verticality, mankind’s yearning to ascend to “high places” and to “reach out and touch the face of God.”

In the 1950s, the oldest Mobile congregation of Jewish people decided to leave Downtown for Midtown and the Springhill Avenue Temple. They chose local architect Thomas Cooper Van Antwerp. Van Antwerp had received his training at the University of Pennsylvania under the French Classicist, Paul Cret. Together, the architect and the congregation produced what, in my opinion, is the finest house of worship built in Mobile in the 20th century. It frankly displays its classic derivation, gains it ornamentation not from classical detailing but from locally inspired brick patterning. It presents itself as both a part of the history of this congregation and also as a part of the history of Mobile. Its interior displays contemporary architecture at its best, and its stained glass helps create a powerful presence. Nestled within its framework of oaks, it has become a part of the community and as it ages, it does so with civility and grace.