If you’ve ever eaten at Southern National, chances are you saw him the moment you walked through the door. Stationed at a floating island outside the kitchen, Chef Duane Nutter isn’t begging for your attention; he’s not lighting things on fire or yelling instructions to the staff. Instead, he garnishes dishes, jokes with a table of customers, passes a piece of information through the kitchen window. He works with a magnetic charisma that attracts your stare, like the conductor of an intricate orchestra, and you find it’s hard to tear your eyes away. (His looming 6-foot-6-inch frame doesn’t hurt.) If you’ve been to Southern National, you’ve seen Duane Nutter.

On this day, however, Nutter sees me first. “I’ve been keeping an eye out for you,” he says, throwing a hand towel onto his shoulder. “I almost told you to just throw a rock at my window when you got here.”

Nutter lives in an apartment directly above the restaurant, making for a much easier commute than his last gig. During his nine years as executive chef of Atlanta Airport’s acclaimed restaurant One Flew South, he says his drive in traffic was quicker than the journey from his parking spot to the airport restaurant.

While the decision to throw the chef out on an island in front of the kitchen is unconventional, it becomes clear that there’s nothing predictable about Nutter. He’s a celebrated chef whose favorite dish is a bologna and egg sandwich (more on that later). He’s a former stand-up comedian who voraciously reads himself down rabbit holes of culinary history. He’s a friendly giant who quit football after taking one helmet to the knee but drags that knee dangerously close to the pavement when racing his motorcycle at 150 miles per hour. “I’ve always gone against the grain a little bit,” Nutter says with a smile.

Born in Morgan City, Louisiana, Nutter spent the first seven years of his life below the Mason-Dixon line before moving with his family to Seattle.

“That’s how I became a Seahawks / Saints fan,” he explains.

Summertime visits back to Louisiana to see extended family, however, ensured that Nutter’s culinary knowledge was built on a foundation of greens and fried fish, cornbread and gumbo.

“I was always fascinated with the kitchen,” he says. “My first burn was when I was like 5 years old. I was playing with my little Hot Wheels on the floor, and I heard all this noise coming out of the pot — they had put the crabs in the pot for the gumbo. I pushed a chair up there … and the steam burned my chest.”

At 8 years old, Nutter created his first original dish, a fried egg, mayonnaise and bologna sandwich. “That’s still my favorite,” he says laughing. Noting her son’s interest in the kitchen, Nutter’s mother came home one day with a gift for the burgeoning chef: a Teflon pan. “I’ll never forget, she came home saying, ‘This way you won’t burn up all the eggs!’”

Nutter’s culinary curiosity continued to grow, and by the time he reached high school, he began to consider a career in the kitchen. At 16, a chance viewing of the “Today” show sealed the deal when Nutter watched a segment about Chef Darryl Evans, the first African American to participate in the International Culinary Olympics.

“It was the first time I’d seen someone of color doing the type of cooking I wanted to do,” he says. “I said, ‘Oh, OK. If he can do that, I want to do that.’ So then I just tracked his career.”

Nutter secured scholarship funding to attend the culinary program at South Seattle College. After graduation, he began working two kitchen jobs, “saving up money to work with Chef Evans in Georgia.” Part chef and part detective, Nutter fondly recalls reading a magazine article about Evans, tracking down the phone number of the Georgia restaurant where he worked and leaving a message from the “pay phone outside of work by the trash can.”

“It was the first time I’d seen someone of color doing the type of cooking I wanted to do. I said, ‘Oh, ok. If he can do that, I want to do that.’” – Duane Nutter on first seeing his mentor, Chef Darryl Evans

To Nutter’s amazement, Evans called back.

“Are you thinking about moving?” Evans asked.

“I’ve got two jobs right now, saving up money to catch a flight out there next month,” Nutter said.

Sure enough, Nutter booked himself a room at a Motel 6 outside of Atlanta, and Evans picked him up, driving the aspiring chef around and showing him the restaurants where he had trained. I ask Nutter what he thinks Evans saw in him.

“I have no idea,” Nutter says, “other than just knowing I was hungry, I guess.”

A year later, Nutter packed his belongings into his 1978 Cadillac and made the cross-country trek from Seattle to Georgia. But a job with Evans was far from guaranteed.

“I had to do a cooking test. He put four or five ingredients in a little pan, showed me around the kitchen … and said, ‘I’m going to come back in two hours, and I want to taste four dishes.’”

Four dishes later, Nutter had a job working with his idol at the Four Seasons Hotel in Atlanta. He was 20 years old. 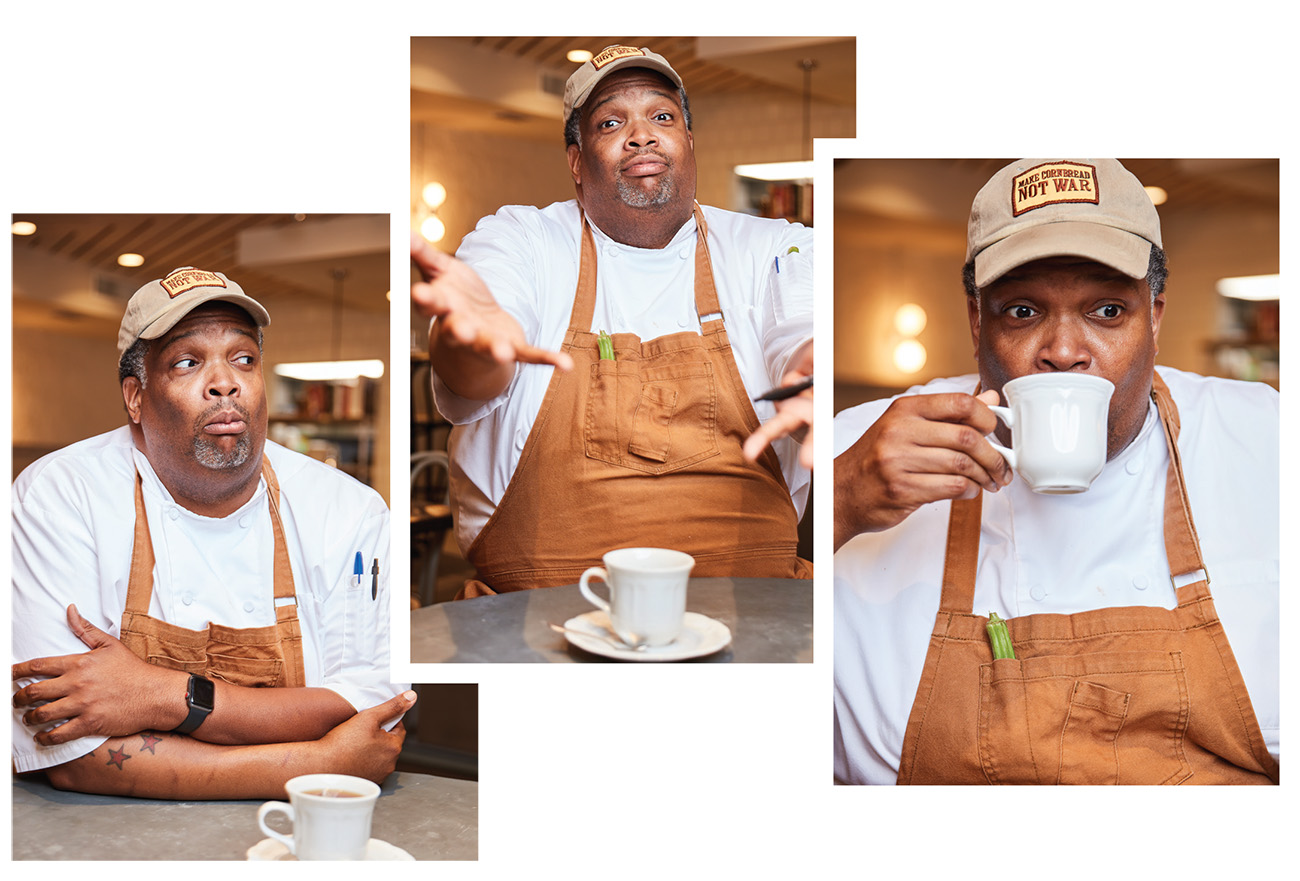 If there’s one thing that might have kept Nutter from the kitchen, it’s making people laugh.

“I was always pretty silly,” he says. “I either thought I was going to be telling jokes or cooking. When I got to Georgia, that afforded me the opportunity to do some improv classes. I kind of navigated myself to be the a.m. sous chef so I could go tell jokes at night.”

Stand-up comedy, Nutter discovered, is a grueling art form. It took about a year before he was rewarded with consistent laughs, a year and a half before he had 10 minutes of solid material. Comedy and cooking, he says, have more in common than you might think.

“Leaving out words in your [comedy] bits — you could get a 30-, 40-second laugh or a 2- or 3-second laugh, knowing where you can interject these things. It’s the same thing, if you leave out an ingredient, leave out a step or a technique … your whole dish can change.”

Creating a dish or crafting a stand-up routine, he continues, both require a point of view. It didn’t take long for Nutter to realize that, among his comedian friends, his day job provided him with a unique perspective. “I talked about being a chef,” he says.

Known as the Mad Chef, Nutter’s popularity in comedy circles began to grow. One night, he found himself opening for comedian Ron White. Later, he reached the semi-finals of Comedy Central’s “Laugh Riots.” Eventually, it came to the point where Nutter had a decision to make: Move to New York City to pursue a career in comedy or focus all of his creative energy on the culinary arts?

An unexpected opportunity with the National Peanut Board allowed him to flex both muscles. For the next three and a half years, Nutter experienced what he calls his “cooking gypsy phase,” leading cooking demonstrations from a traveling peanut museum in every state but Alaska and Hawaii. As he traveled, Nutter got in the habit of looking ahead at the next city, scoping out comedy clubs for open mic opportunities and fine-tuning his act. But when an opportunity arose to cook at the Ritz-Carlton in Palm Beach, his life as a comedian was put to the test. On the same day he undertook a phone interview for the job in Florida, he received a call from his improv instructor who was looking for a comedian to be in a commercial with Charles Barkley.

“That was the crossroads,” Nutter says. “I said, ‘Man, I’m going to the Ritz-Carlton tomorrow.’” 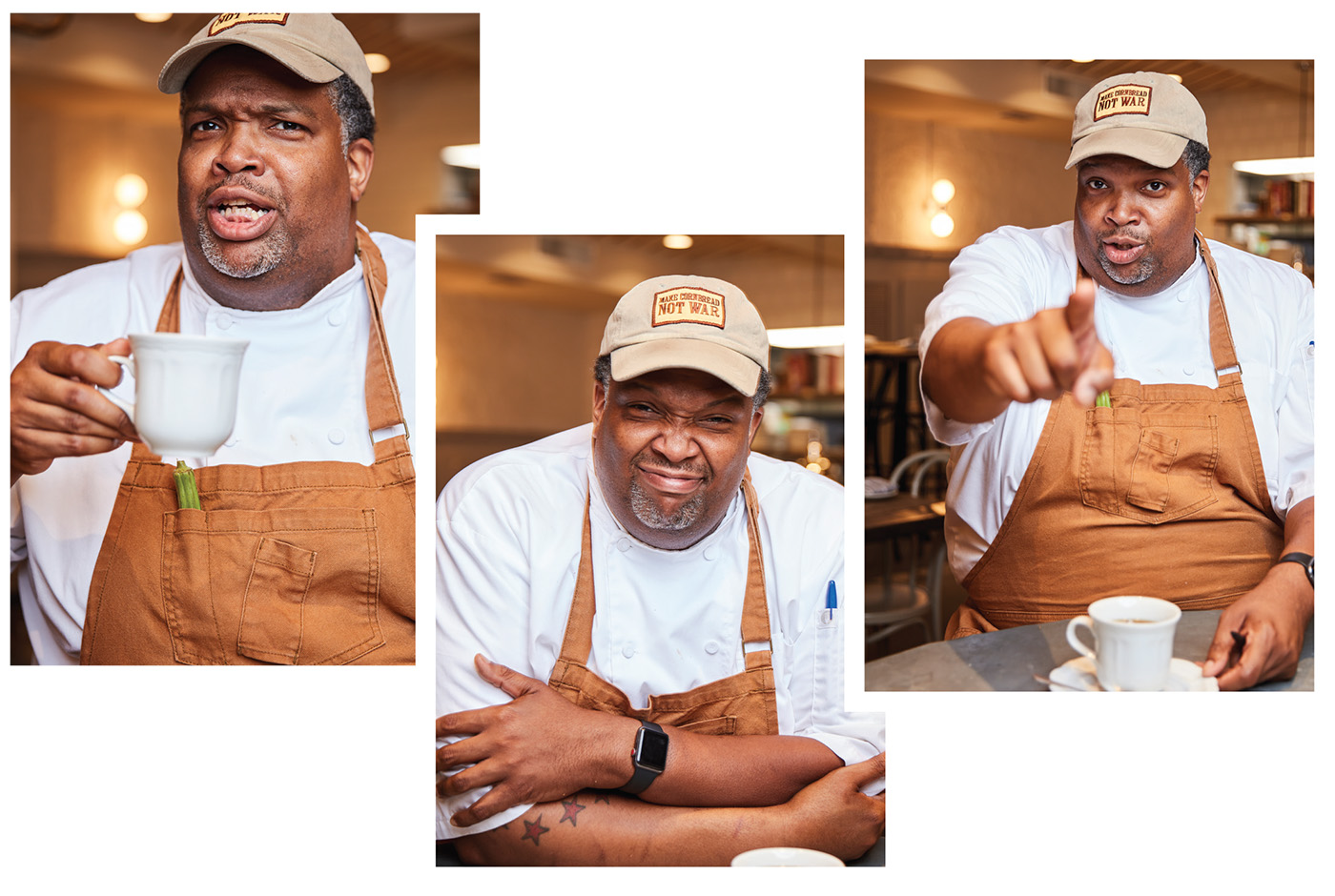 Nutter’s wandering days were far from over, as his culinary career carried him from Florida to Kentucky to Atlanta to Mobile. Today, glancing around the interior of Southern National from a seat at the zinc bar, he contemplates the restaurant he and business partner Reggie Washington have created on Dauphin Street. “In a weird way, it’s a concept born in an airport,” he says. In his previous role at One Flew South, Nutter says the airport setting forced him to reevaluate his identity as a chef.

“I was at the world’s busiest airport, and it seemed like it was my duty to represent the entire Southeast … That’s where this style of food was born from. Just me in the hallway looking at the people walking around, then I’d go back [into the kitchen] and think of something.”

One Flew South, Nutter acknowledges, “changed dining in airports across the country,” proving that a chef-driven restaurant could thrive in an airport terminal; during Nutter’s tenure, the restaurant received two James Beard Award nominations. (It was the first airport restaurant ever considered for the prestigious award.) More importantly for Mobile, One Flew South is where Nutter began his working relationship with Washington, the Atlanta restaurant’s general manager. When the pair began considering opening something of their own, Washington, a Mobile native, urged Nutter to visit his hometown.

“It felt like Charleston before the banks came,” Nutter says of his impression of Mobile. They decided to begin their new venture in the Wilkins-Higgins building across from the Cathedral Basilica of the Immaculate Conception, and, with the help of Atlanta’s Smith Hanes Studio, created an atmosphere that mirrors Nutter’s attitude toward dining.

“It’s contemporary but comfortable. You don’t necessarily have to get dressed up if you don’t want to … There’s a buzz when the place gets full and everybody’s having a good time. There’s a good energy about the place.” The dishes Nutter has created at Southern National reflect his journey — rooted in the South but inspired by his reading and world travels. Think black bean grits, pan-roasted salmon with an oyster gravy or a German chicken schnitzel (Nutter’s international answer to the Nashville hot chicken craze).

Just five months after its opening, Southern National was named a semifinalist for the 2018 James Beard Award for Best New Restaurant, a shocking but validating development for Nutter and Washington. And while Nutter hasn’t performed at a comedy club for about a year, it occurs to me that he has found a way to perform onstage every night from the floating island, his dishes substituted for punch lines, his customers for audience members. Like any true performer, Nutter knows that dining, like comedy, is better when the house is packed.

“Food should be enjoyed with more than one person,” he says. “But sometimes that one person is good, because without that, the love of the bologna sandwich never would have happened in my life.”