October’s coolness has only just arrived, and artist Jan Jones is already knee-deep in Santas. Her Magnolia Springs living room is filled with works in progress, every surface covered with bits of characters in various stages of becoming. A gathering of clay hands spills across a foil tray. Identical blank faces wait for personalities to be painted on.

If Jones had a past life, it was surely in Victorian England. As we talk, she crumples aluminum foil into a column. In subconscious flow, her fingers pull arms from the shiny jumble and massage life into a beginning torso. She drapes glue-drenched paper towels over the armature and they morph into the elegant flowing robes of an old-world Father Christmas. The artist adds a clay face and deftly fashions a hood, cuff and hem. Her creation takes on different attitudes as she bends its back and arms. She boasts boxes and drawers full of props with interesting shapes, finishes and textures awaiting her fancy. Most of them are found items – shells, driftwood, twigs.

Jones says she sometimes sits for hours immersed in creation, with movies playing in the background. “People ask me how long it takes to sculpt a piece. That big one over there took one ‘Gone With The Wind’ and one ‘Divine Secrets of the Ya-Ya Sisterhood, ’” she laughs.

Her artistic expression began many moons ago. Young Jan was a precocious child who loved crafts from the get-go. Her first materials were everyday finds. At age 3, she fashioned cloth scraps into doll clothes. Later, she chained clover blossoms and swirled them all around the dining room. By 11, she was weaving palmetto fronds into placemats and shoes. Jones believes she inherited the artistic bent from her mother. Influenced by the Great Depression, her parent made do with what she had. In turn, Jones developed an appreciation for repurposed and salvaged objects.

During the holiday season, most of Jones’ work is in Santas, elves and angels. The rest of the year, her art takes on a coastal cast. Large parrots, herons and pelicans stand in her studio poised for flight. Shell and driftwood gatherers, dressed in long robes, carry props she’s picked up in her wanderings. One 3-foot character hefts a sack of driftwood washed up by the Bay. Another cradles shells Jones harvested on the beach. A third coastal denizen rests his weight on a staff that was once a stick in her yard. Anything in nature might wind up in sculpture. 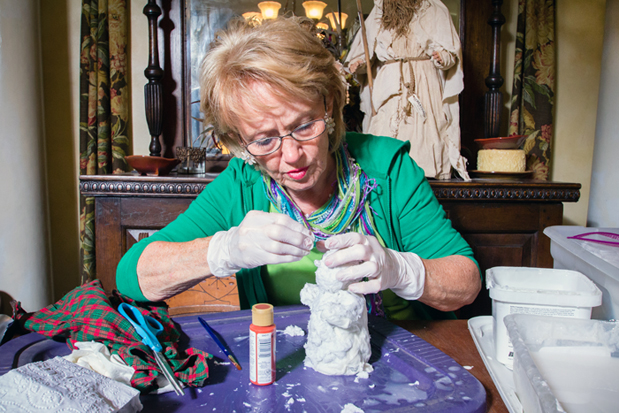 You don’t have to be artistically inclined to experience the joy of handcrafting figurines like Jan Jones. She regularly teaches workshops, which last a day and a half. Participants leave with a completed handmade piece of their choosing – from snowmen and angels to frogs and rabbits.

On day one, Jones provides a detailed demo, and students create their basic structures. That night, Jones bakes the pieces in a low-temperature oven. The following morning they are ready for painting with acrylics.

“Hers is not the newspaper and glue concoction of elementary school, but rather carefully crafted, three-dimensional works of art, heirlooms to be treasured. Without taking the class to value the whole process, I would not have had a clue about the intricate process involved in the creative work she delivers, ” says student Anne Meyercord.

Jones teaches students of all skill levels, including retired men who come along with their wives, snowbirds and out-of-towners visiting the Eastern Shore for an art-themed weekend. “I love seeing people feel good about their art. They go home and play some more; it’s great therapy, ” she adds.