After three years of working at the Flora-Bama, Compton Smith does not think twice when he sees a group of women adding their own bras to the collection of undergarments weighing down the clothesline above the dance floor. “It’s a rite of passage at the Flora-Bama for a lot of people, ” Smith explains.

But there was something about a recent group of bra-droppers that caught his eye. “I saw a group of ladies, and I think one of them, who had a walker, was about 90 years old, ” Smith says, chuckling. “They tried for 20 minutes to get their bras up on the line. Eventually they got some young kids to help them.”

As Flora-Bama’s host and master of ceremonies (yes, those positions exist), Smith has one overall responsibility. “My job is to make sure that everybody has a good time, ” Smith says. What exactly does that mean? “I introduce all the bands onstage and make sure everybody knows what’s going on and what’s coming up next. Like an emcee for the Oscars, ” he explains. That is, an Oscars with 90-year-old women slinging around their bras.

The Flora-Bama is legendary in these parts for its bushwacker-fueled hoedowns (my grandmother says she can smell the place a mile down the road), and everyone has a Flora-Bama story. “There’s a fight here just about every night, ” one employee tells me. “One lady walked in with her stuffed cat, ” says another. But all seem to agree on one thing: Sometimes the craziest characters at the Flora-Bama are right behind the bar. Compton Smith doesn’t deny that.

“I am that crazy character everybody works with, ” he admits readily.

The only thing unoriginal about Smith is his last name. For starters, he’s worn a kilt every day for the past six years. “I’ve realized that simplicity is really important to me,  and there’s nothing simpler than wrapping a kilt around you with some Velcro across the top and being ready to go.”

And despite the bras, the brawls and the taxidermy cats, Smith recognizes his gig is pretty sweet. “My job is to make sure that everybody has a good time at one of the best parties on the planet, ” Smith says. “And we get to throw that party every day.” 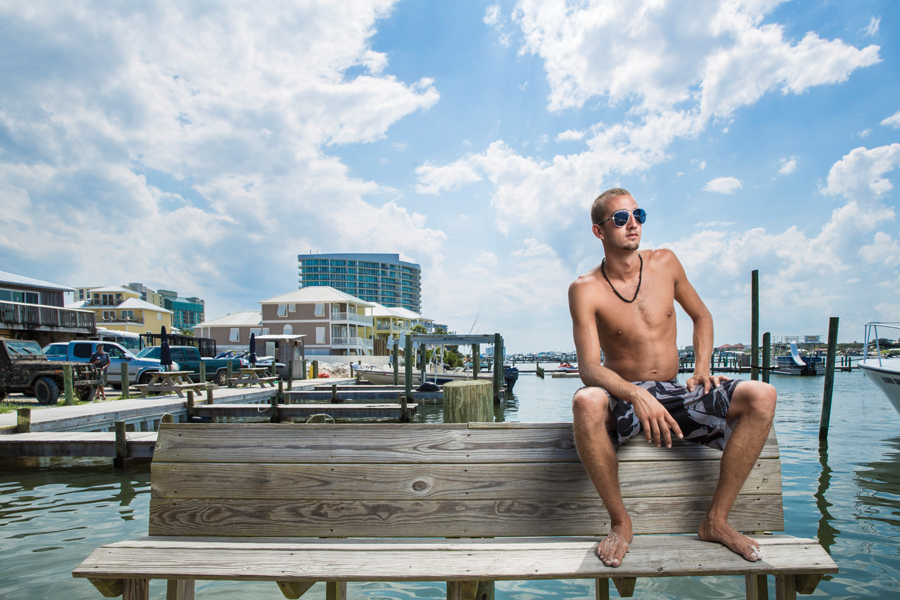 Is this, like, a family-oriented type of story?” Justin Rich asks, gauging which of his tales from Flora-Bama Watersports and Rentals are appro-priate to share. The young and tanned dockhand has only worked at the rental shop since the end of last year, but he talks like someone who’s seen too much in too little time.

The irony of the whole story? “He’s done this before, actually. That same guy.”

As a dockhand, Rich takes on a lot of responsibilities at the marina across the road from the Flora-Bama. He refuels jet skis, strategically maneuvers pontoons, rents out kayaks and paddleboards, makes sure boats are parked in the designated locations and occasionally reminds inebri-ated boaters where they are.

“One time, a boat pulled up on our beach where we run our jet ski rentals, and I could tell these guys had been drinking, ” Rich says. “I pointed out the ‘no parking’ sign, and one of the fellas responded, ‘C’mon, man, I tinted all of your windows. Ain’t I good to park here?’”

Rich asked which windows he meant.

Rich shook his head and told them Happy Harbor was about 20 miles west.

Despite the daily shenanigans, Rich talks about his job with an upbeat energy that’s common among people who use the beach as an office. “We do our best to handle these difficult situations. The bottom line is we want everyone to have a good time, but we want them to be safe while doing so.

“I just love working at the beach and getting to meet tourists who are just happy to be out there. That’s what it’s really all about — seeing the customers who rent from us come back happy at the end of the day.” 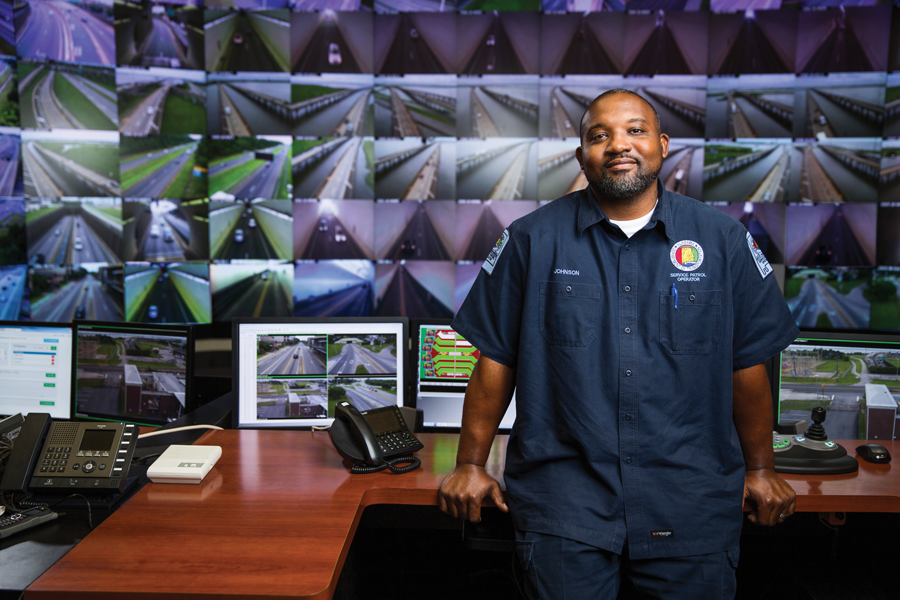 In a low-key building, tucked away just minutes from the Bankhead Tunnel, Terrell Johnson stands in front of a wall of 96 video screens, which collectively monitor every inch of the Bayway, Cause-way and Mobile’s two tunnels. In this dark, futuristic room fit for Darth Vader, I meet with Johnson, who is far from a villain. In fact, according to one of his four children, he’s the complete opposite.

“My daughter said the other day, ‘Dad, you’re a superhero, ’” service patrol operator Terrell Johnson says. “‘You save people all day, every day, ’” he says, mimicking his daughter’s voice. “I thought, ‘Hey, I kinda like that, ’” he admits with a contagious laugh.

As a service patrol operator for the Alabama Department of Transportation, Johnson has done it all — and seen it all. He and his fellow operators are usually the first responders to any traffic incident in the aforementioned locations, changing tires, assisting overheated vehicles, delivering a much-needed gallon of gas and assisting 18-wheelers that have wedged themselves into the Bankhead Tunnel.

“It’s never boring around here, ” Johnson says. “Even a tire change. I might change five in one day, but every one of them is different.” The service that guys like Johnson provide can’t be overstated. Because, according to the national average, for every minute a lane of traffic is blocked, it takes four minutes to reestablish normal flow. When responding to a call, every single minute counts.

Johnson reels off his best work stories, from ushering alligators across the Cause-way (“They’re protected animals, so we gotta block off traffic”) to escorting terrified drivers through the Wallace Tunnel (“That happens more than you’d think”). One of his favorite stories began with a routine response to a broken-down car on the Bayway. “I pulled up and saw a lady and a man sitting in their car with life jackets on. I asked if they were OK and they said, ‘Yeah, we’ve got a flat, so we put on our life jackets just in case somebody knocked us off the bridge, ’” Johnson laughs. “I said, ‘Sir and ma’am, y’all can stand up in that water. It’s not as deep as you think.’”

I marvel at the countless services Johnson provides, but he laughs it off. “Hey, what do superheroes do? A thousand jobs!” 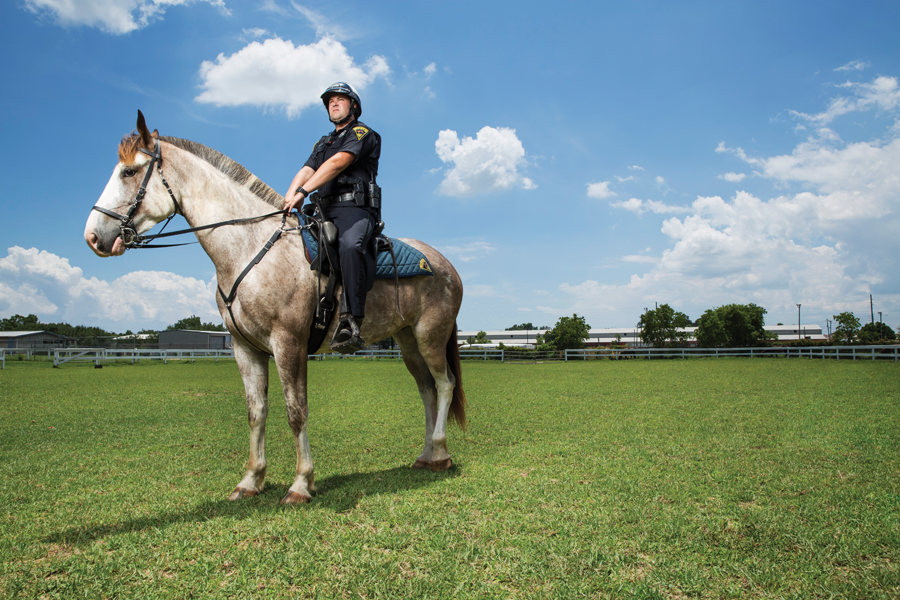 His name is Leo, ” Mobile Police Department Mounted Officer Josh Hart says from atop his crime-fighting partner in hooves. “Like the initials for ‘law enforcement officer.’” Whether that was intentional or coincidental, I forgot to ask.

From the saddle, Officer Hart doesn’t have to try hard to convince me how intimidating a horse can be to an unruly crowd. “But a horse has two sides to it, ” the unit’s Sgt. Jason Hensen explains. “It’s a very approachable animal, which means we can talk to kids who wouldn’t ever normally approach an officer. At the same time, if we’re in a line and trying to control a crowd on horseback, that crowd’s gonna move.”

Officer Hart’s job is far from easy. There’s the hot polyester uniform, rowdy Mardi Gras revelers, overeager horse-admirers and members of the public intent on feeding the animals. “We don’t want the horses to eat on patrol because we don’t want to get them in the habit of looking for treats on the job, ” he explains.

At this year’s TenSixtyFive Festival, Officer Hart had an experience that perfectly demonstrates the effectiveness of the mounted unit. Because of his higher vantage point on horseback, he and another mounted officer were able to spot a ground officer tussling with a suspect in the middle of a crowd. “By the time we were halfway into the crowd, we had established a 10-foot radius in two seconds, ” Officer Hart says. “That’s what we do.”

The public hardly sees a lot of the excitement of his job. But if you drive past the mounted unit facility on Virginia Street at just the right time, you might be in for quite a show. “We’ll have helicopters hovering over us, fire trucks screaming past us, motorcycles, flares, guns going off, ” Sgt. Hensen says, in a field outside the facility. The idea is that if a horse is exposed to such distractions here, they’ll be prepared for just about anything in the line of duty.

And if you really want to see something fun, watch the unit get deployed Downtown with a moment’s notice. “We could get a call from a major saying, ‘We’ve got a large crowd down here, we need you, ’ and we gotta be ready in 45 minutes. That can get pretty crazy.”