George Finkbohner Jr. explains that his mother had a theory. “She used to say that a big storm rolled through Mobile every 10 years, ” he shares. And you can’t fault her for thinking so. Born in 1896, Rachel Finkbohner’s early life was watermarked by the hurricanes of 1906, 1916 and 1926. (Thankfully for Mobile, the ensuing years poked holes in Rachel’s theory: A major hurricane wouldn’t affect the city again until the Category 5 Hurricane Camille in 1969.)

George will be the first to tell you that he doesn’t know much about the ghostly images he found in his mother’s belongings. His only clue is looped in pencil on the backsides of the photos: “July 5, 1916.”

His grandfather, Captain Thomas P. Norville, served as Mobile’s harbormaster in the early 1900s, a position he would have held on that fateful day in July. Arriving at the tail end of Independence Day celebrations, the Category 3 July Hurricane of 1916 (another storm followed in October of that year) is remembered in Mobile for its waterfront destruction and record-setting storm surge; at 11.6 feet, the surge edges out Hurricane Katrina (11.46 feet) as the highest in Mobile’s history.

“I don’t know if these were my grandfather’s photos or my mom’s photos, ” George explains. “But they’re fascinating, aren’t they?”

Whatever their origins, there’s no question that the pictures offer a rare perspective into the aftermath of one of Mobile’s most devastating and unexpected natural disasters.

TAKING ON WATER
The storm surge on that day was the highest in Mobile’s history, reaching 11.6 feet. At 4:45 p.m., the St. Francis Street Wharf was completely submerged. By 7 p.m., Royal Street was two feet underwater. The flood continued creeping into the city, eventually leaving St. Joseph Street immersed under a foot of water.

INDEPENDENCE DAY
The fifth of July was the earliest day of the year for a major hurricane to make landfall in the U.S. (a record broken by Hurricane Audrey on June 27, 1957). This may help explain why residents of Mobile were so caught off guard by the storm’s power and destruction. On July 4, the weather was ordinary, and despite reports of a tropical cyclone heading north from the Caribbean, Independence Day celebrations carried on without much concern. At 9:13 that evening,
a telegraph warning of an approaching storm arrived and circulated throughout the public.

HIGH WINDS
Starting at 4:30 a.m. on July 5, wind speeds began to steadily increase until averaging 80 to 85 miles per hour, with gusts reaching 106 miles per hour.

DEADLY DESTRUCTION DOWNTOWN
Excerpts of hurricane damage as described by the Mobile Register: “The smokestack of the Battle House and its two wireless towers were blown away … Street car service stopped about 1:45 o’clock in the afternoon. Hundreds of people were marooned downtown, and had to spend the night in hotels … Scores of persons, including a number of prominent Mobilians, county workers and court attaches fled from the courthouse into the jail … The courthouse tower was wrecked and rain poured into the court rooms … Live wires were a constant menace to life … One such wire killed a horse at Conception and St. Michael streets.” 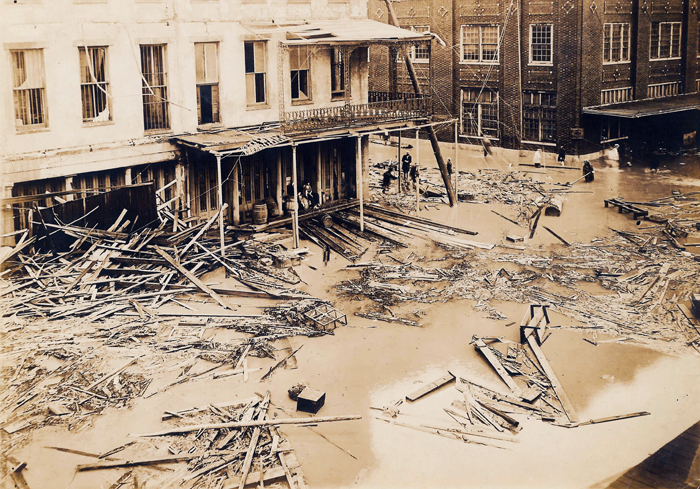 MILLIONS IN PROPERTY DAMAGE
The Mobile Register wrote, “Every house on the bayfront from Bay Avenue and Shell Road was demolished … The Bay boat Pleasure Bay sank at the mouth of One-Mile Creek and the Carney went to pieces and to the bottom at the foot of Dauphin Street.” Damage caused by the storm in Mobile was estimated at $1.5 million (equivalent to nearly $33 million today).

DON’T ALWAYS BELIEVE WHAT YOU READ
Varying reports offer different death tolls on the Gulf Coast, from four to nine fatalities. There were zero deaths in Mobile. Sensationalist publications around the country put death tolls as high as 22, stirring resentment among Mobilians. The Mobile Register responded to such accounts five days after the storm: “People outside are always alarmed when they read that the hurricane has come, that the wires are down and Mobile is shut off from the world. Newspapers have been known to print in red ink and largest letters ‘Mobile Is Wiped off the Map!’ but it has never happened, and if we judge by what has been experienced in the past, it will never happen. Mobile is the most comfortable place we know of in which to have an attack of hurricane.” 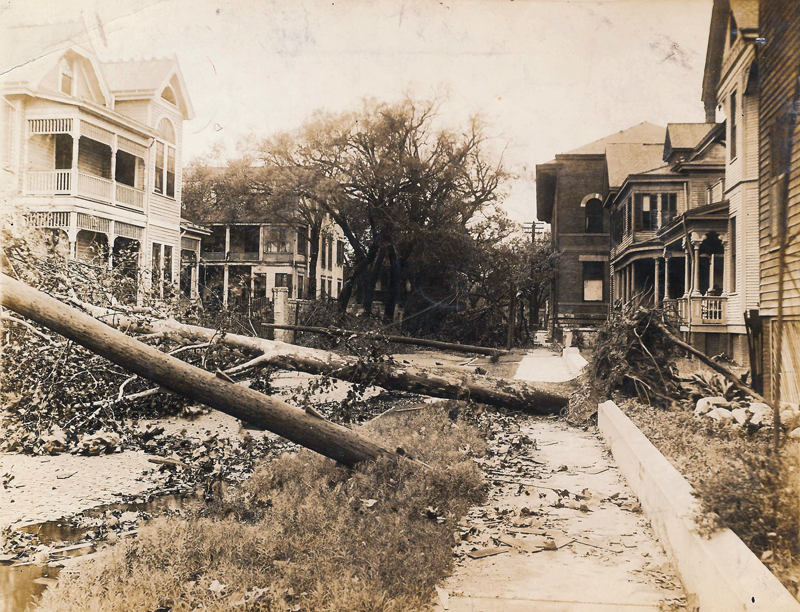 Do you know the locations of these photos? Or, do you have your own photos of the destruction caused by the 1916 Hurricane? If so, we want to hear from you! Email bpappas@pmtpublishing.com or upload photos to our Facebook page.