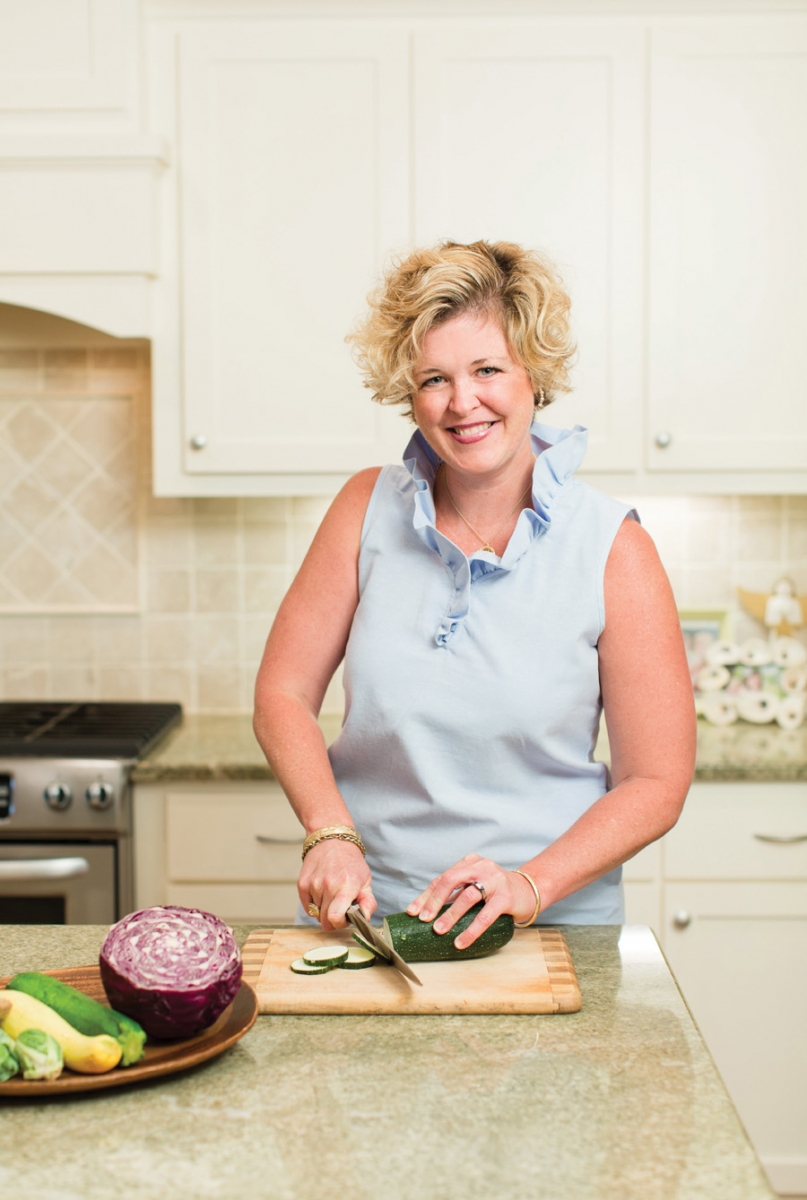 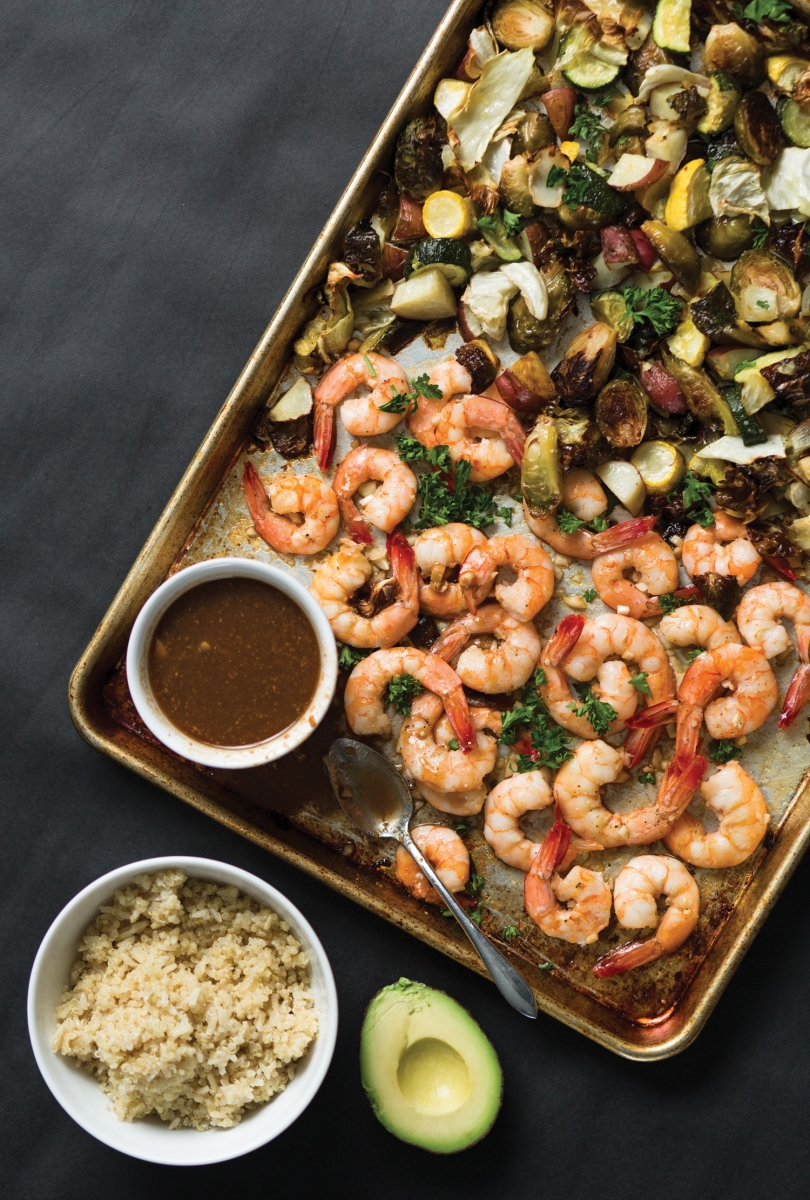 Kathryn Watkins discovered her love of cooking in one of the most exciting kitchens in the South. Her first job right out of college was with Cooking Light Magazine, and during that time she was exposed to delicious gourmet meals on a daily basis. As art director, the endless parade of recipes, chefs and ingredients coming through her office made a lasting impression, and her home kitchen in Fairhope has been the better for it.

Now that she’s a wife and mom of two, her kitchen may look different, but her love of good food remains. The kids are growing fast, and about a year ago, the Watkinses decided it was time to start family meal night. Everyone eats together and (mostly) eats the same thing. It was also a perfect opportunity for Kathryn to introduce a gluten-free and dairy-free regimen that benefits everyone’s health. Recipes that take 30 minutes or less keep the chaos of dinnertime with little ones manageable. She enjoys the prep work for these clean-eating meals, where chopping and stirring can be almost therapeutic, especially when helped along by a good glass of wine.

If you’re short on time, the veggies for this hearty but healthy dinner can all be chopped the night before and stored in the refrigerator until cooking time. The sauce can be made ahead as well, so this clean-eating meal requires minimal fuss.

1. Preheat oven to 400 degrees.
2. Coat the bottom of a large sheet pan with cooking spray. Cut vegetables into 1/2-inch wedges and place on the sheet pan. Drizzle with olive oil and season with salt and seasoning. Toss to coat, then spread into an even layer. Place sheet pan in the oven and roast for 25 minutes, stirring once during cooking.
3. Meanwhile, add shrimp, sesame oil and garlic to a zip-top bag and allow to marinate in the refrigerator while vegetables cook.
4. Bring 1 3/4 cups of water and quinoa to a simmer in a medium saucepan. Add a pinch of salt, reduce the heat to low and cover. Simmer for 15 minutes, or until water has been absorbed and quinoa is cooked. Fluff with a fork.
5. Remove the sheet pan from the oven and push vegetables to one side of the pan. Add the marinated shrimp. Return to oven and roast for an additional 10 – 15 minutes until the shrimp are fully cooked, stirring once during cooking.
6. To assemble the Buddha bowls, spoon quinoa into bowls. Top with roasted vegetables, shrimp, avocado and parsley. Drizzle vinaigrette over the top and serve immediately. Serves 4.

1. Combine all ingredients except the vegetable oil in a food processor, then drizzle oil through the feed tube while the blade is running. Dressing can be made ahead of time and refrigerated until needed.

CHEF TIP: Kathryn shops at the Fairhope farmers market and whips up this Buddha bowl with whatever produce is in season. Dig around in your own produce bin and work with what you have on hand. Squashes, broccoli, root vegetables, kale, okra — anything can shine in a dish like this. 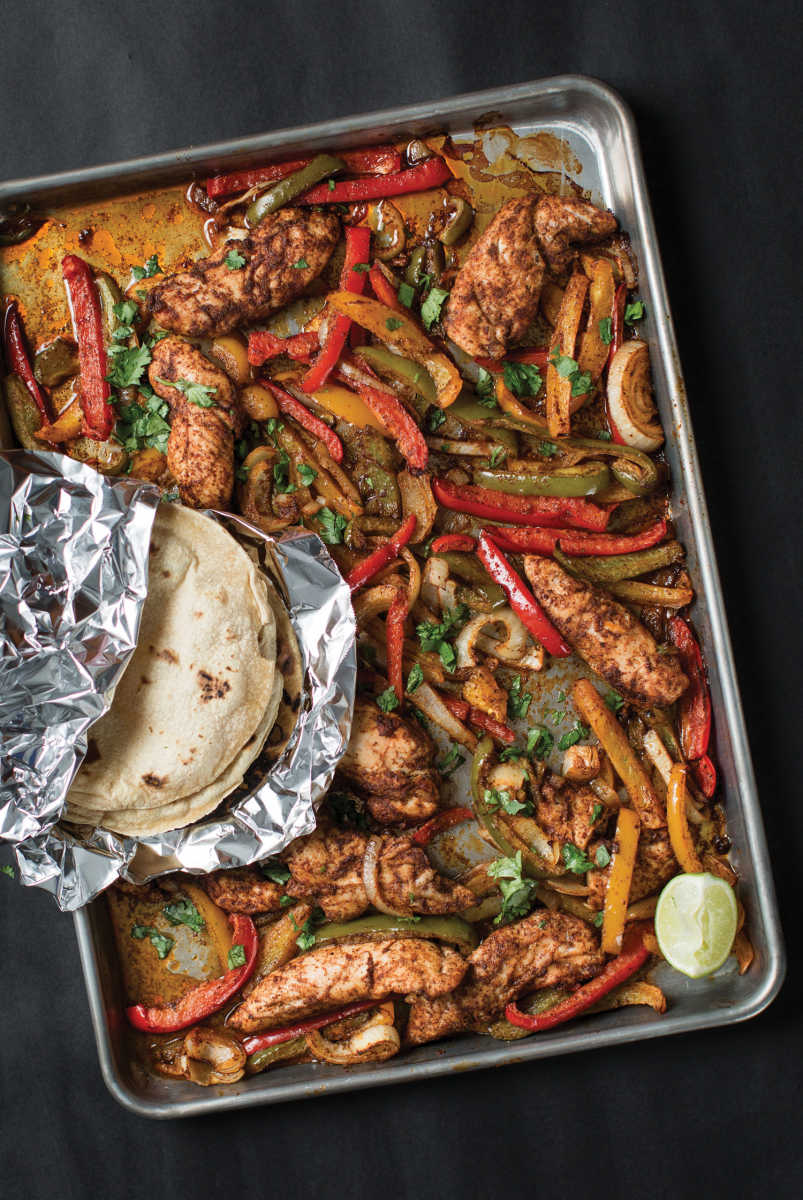 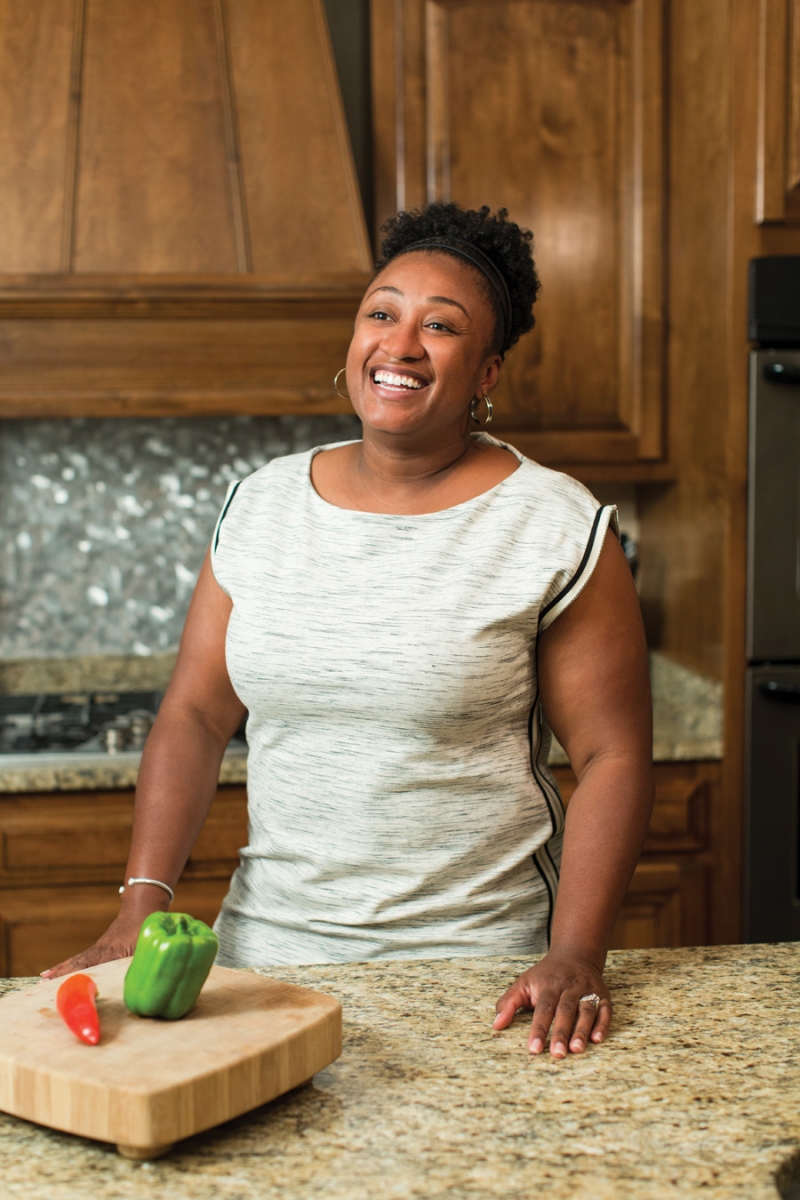 Tracey Burdine grew up eating traditional Southern cooking, and her family still eats that way every Sunday at her mom’s house around the corner. But the weeknight dinners she pulls together with good meal planning and plenty of prep often have a different flavor. She and her husband were both active-duty military for 13 years, and they moved several times all over the country, including to Puerto Rico and back again, expanding the family’s palate and introducing new tastes. She says the weather influenced her cooking style as much as anything. It was so hot in Puerto Rico, the last thing this mother of four wanted to do was stand over a steaming stove for hours. She developed a repertoire of quick and easy meals that a working mom can put on the table in no time with little sweat.

Now, her two teenage sons help out in all aspects from cooking to grocery shopping. Tracey likes to plan meals on Sunday, though, and she preps as much as possible before leaving for work each morning. That way, dinner is ready to pop in the oven, no matter who arrives home first.

Skip Mexican takeout with all the added fats and ingredients you want to avoid. Instead, make a perfect south-of-the-border meal fresh from your own home. All the chopping can be done the night before, so dinner can go straight in the oven as soon as you walk in the door. Forget taco Tuesday — the new tradition will be fajita Friday!

1. Preheat oven to 400 degrees.
2. In a small bowl, combine dry seasonings. Set aside.
3. Place peppers, onion and chicken onto baking sheet. Drizzle olive oil over pan and sprinkle garlic and seasoning mix over the top. Toss evenly to coat and then spread chicken and vegetables evenly across pan.
4. Roast, tossing once halfway through cooking, until veggies are tender and chicken has cooked through, about 18 – 25 minutes. Do not overcook or the chicken will become dry.
5. Wrap tortillas tightly in aluminum foil and warm in oven during the last 5 minutes of cooking.
6. Remove from oven and pile chicken and veggies on tortillas. Finish off with favorite toppings. Serves 4.

CHEF TIP: Tracey’s sons like to marinate the chicken tenders in olive oil in the fridge during the day before they cook that night. It tenderizes the meat, and the seasoning adheres better. 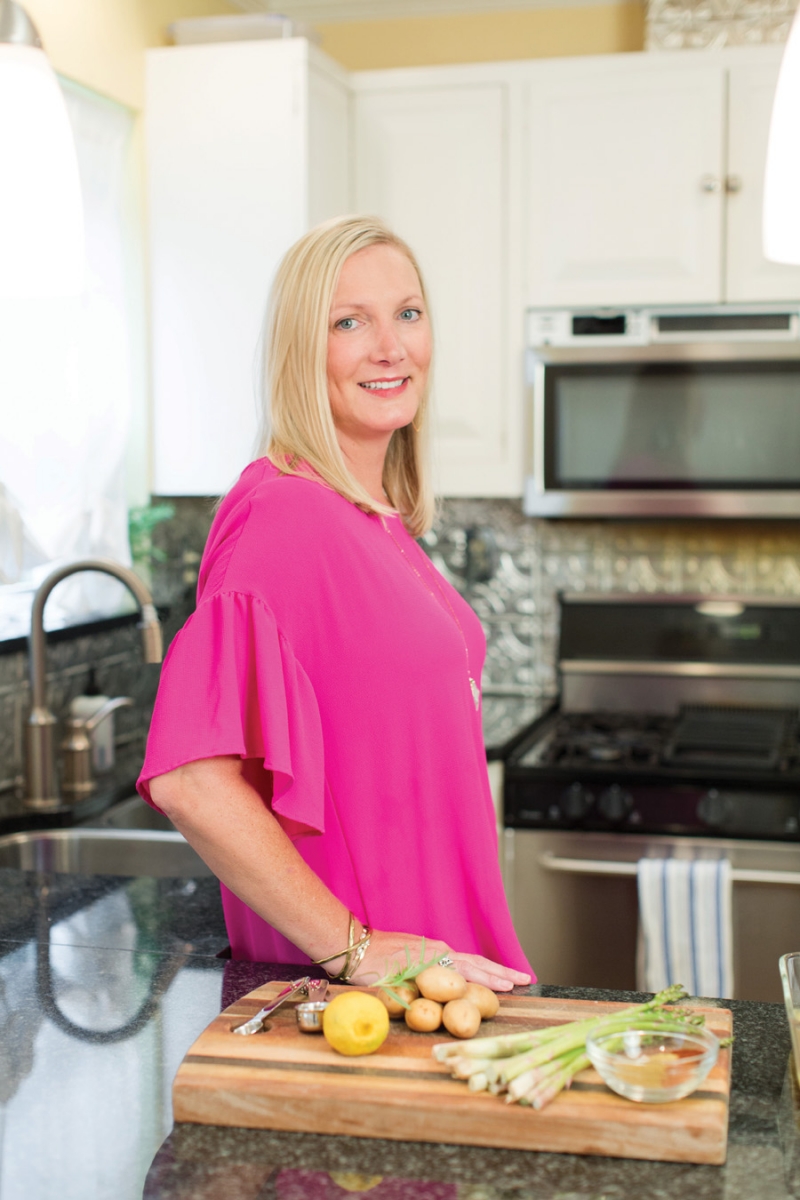 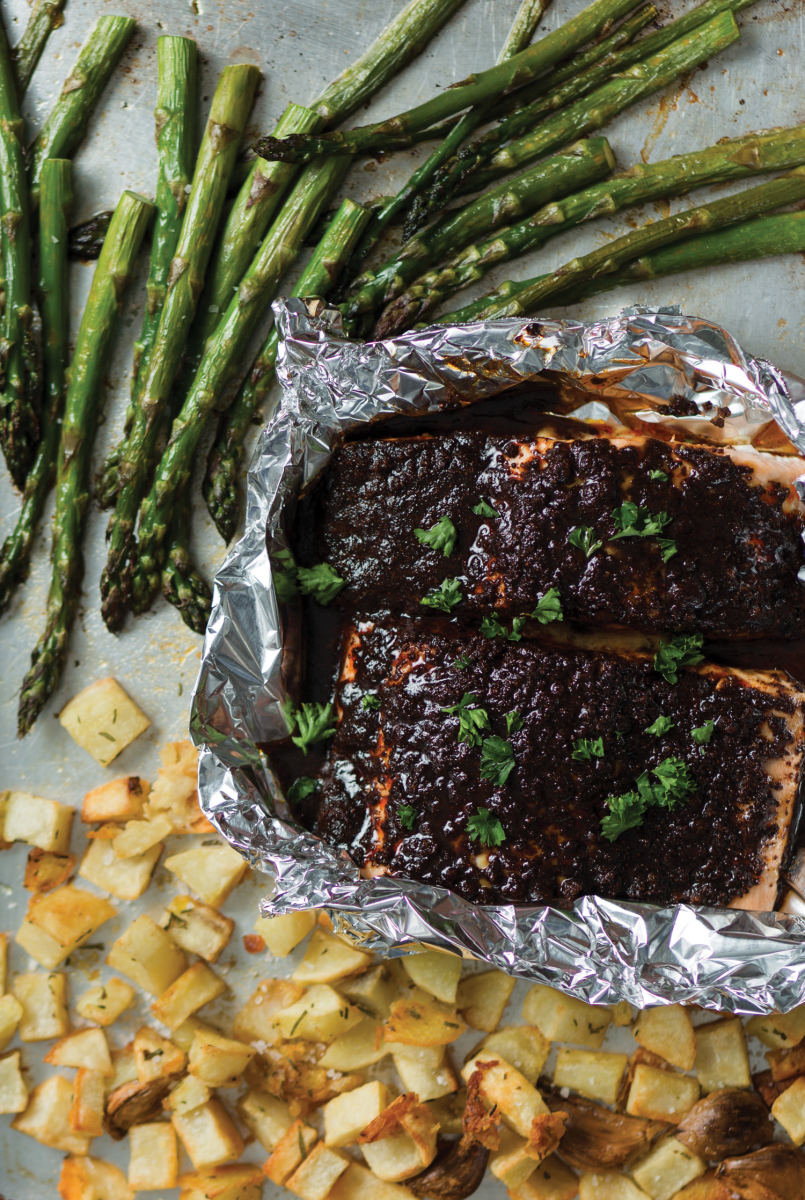 Having four small children can make getting dinner on the table a daunting task. Doing this while running three successful dentist offices with your spouse sounds downright terrifying. But Leslie Buckley, often known just as Dr. Leslie, manages all of this with apparent ease. She claims she learned everything she knows about cooking from her husband, Daniel, who friends say should really open a restaurant. The Buckleys are self-described foodies and confess they don’t plan their meals in advance. Rather, they go where the mood takes them each night. Still, they seem to get a delicious dinner on the table most nights of the week. Pizza cooked on the Big Green Egg is a family favorite. When pressed for time, chicken tenderloins cook in a flash.

The Buckleys completely renovated their house in Spring Hill when they bought it 13 years ago, including a total kitchen overhaul. Four kids (ages 8 months to 8 years!) later, however, and they’ve outgrown the three-bedroom cottage. Plans are in the works to build a new home to fit their growing brood with a kitchen big enough to feed them all, too.

The foil packet keeps the flavorful Polynesian-inspired BBQ sauce from making the crisp potatoes soggy. Just recycle the foil and there’s only one pan to wash!

1. Add salmon fillets and pineapple juice to a large zip-top bag and marinate in refrigerator for at least one hour.
2. Preheat oven to 400 degrees.
3. Place potatoes and whole garlic cloves on sheet pan and top with two tablespoons olive oil, a pinch of sea salt and rosemary. Toss to coat and spread in even layer across one half of sheet pan. Roast for 15 minutes.
4. Meanwhile, toss asparagus in 1 tablespoon olive oil and the lemon juice. Set aside.
5. Mix brown sugar, chili powder, cumin, cinnamon, 1 teaspoon sea salt and 1 tablespoon olive oil together in a small bowl.
6. Remove salmon from marinade and pat dry. Discard the juice. Place fillets on a small piece of foil and pull sides of foil up around salmon to create a “boat.” (This will prevent salmon juices from touching vegetables.) Spread sugar and seasoning mixture over the salmon.
7. Remove sheet pan from oven and add the salmon “boat” and asparagus. Return to oven and cook for an additional 15 minutes, until the salmon flakes.
8. Garnish with chives and lemon slices and serve. Serves 4.