“Shadow has been here with us 11 years, ” center director Desiree Bishop, says about their gregarious crow, a North American bird species capable of human speech. “It wants to be human.” And that’s the problem.

Years ago someone found Shadow, perhaps out of its nest, and brought it in. But the crow had been “human imprinted, ” unable to fend for itself in the wild, forever relying on people. The center sees that often as they care for South Alabama’s wounded wildlife.

Most know the center as the science and environment resource for Mobile County schools. Students and teachers learn about all things nature here. Since opening in 1974, the 500-acre classroom with a lakeside view has hosted 20, 000 young scholars and instructors. But there is another side the public seldom sees in depth, the rehab room – the side Shadow and company depend on.

On any day dozens of animals are treated for injuries, given safe refuge and receive physical therapy. Some recover completely; others never leave. “Our purpose is two-fold, ” Bishop says. “One: Treat animals and release. Two: If the animal cannot recover enough to live in the wild, we keep it.” 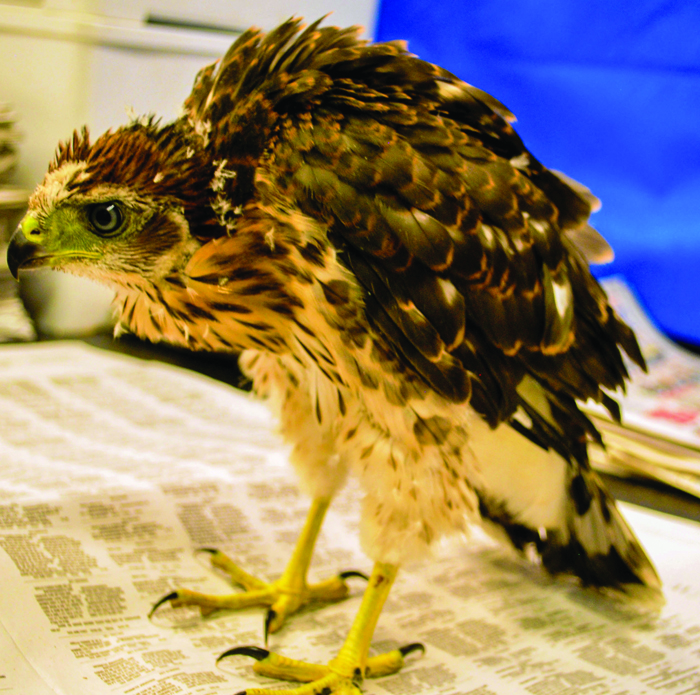 Most patients are “referrals, ” meaning people drop them off. Animals vary from the typical opossum, owls, armadillos and turtles to the uncommon, like an oceangoing frigatebird, which lives nowhere near here. Feeding this visitor, which has an 8-foot wingspan, was like serving food to a small aircraft.

Rehabilitation supervisor and biologist Susan Clement treats them all, but her patients do not understand business hours. “Baby birds are syringe fed, once an hour, every 16 hours, then they sleep, ” she says, “That means at closing time, they’re loaded in the car and taken home with me.”

Baby birds are often received from well-meaning people. “Someone sees a fledgling hopping around the yard and assumes it fell from a nest, ” Clement explains. “Actually it is probably learning to fly and may have been best left alone.” A true baby, or “nestling, ” has few feathers and doesn’t walk much. “In that case, build a small nest from twigs and leaves, and place infant and nest in a nearby bush or tree.” The biologist continues, “Don’t worry about mama not seeing her offspring. She will find it by the sound of her baby’s — and only her baby’s — distress call, not by sight.”

And, if the bird is a great horned owl, use precaution. The center receives many, often hit by cars at night. Donning thick gloves, Clement gingerly pulls one of the magnificent and foreboding creatures from its cage. Seeing this winged wildcat at close range, I understand why they call the great horned owl, “great.” With huge yellow eyes, an unblinking stare, and 3-inch skull-crushing talons, I want to pet it, but I realize I’d probably go to the hospital.

Human interaction with the animals is discouraged. This is a rehab center, not a zoo. During my visit, two beautiful, rehabilitated great horned owls were released into the wild.

But it’s not all for the birds. Mammals, reptiles, snakes and more wait their turns.  Each requires special care. 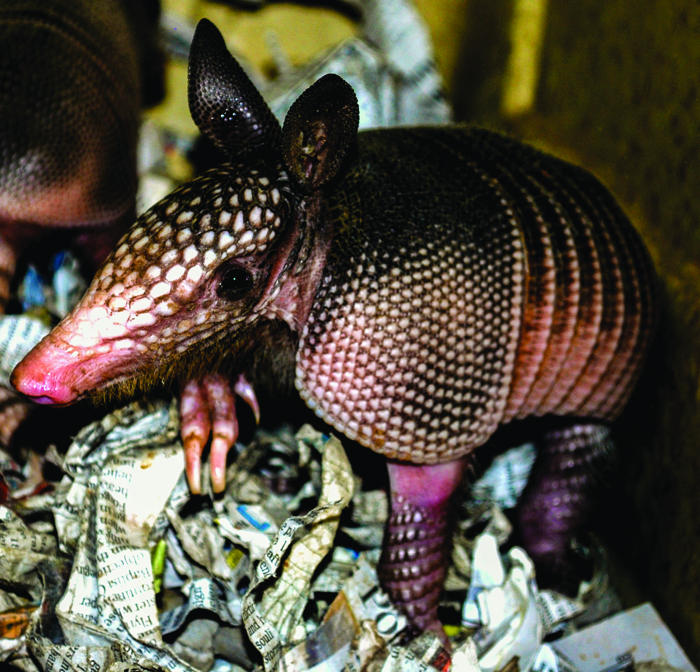 “I love baby armadillos, ” Clement says. “They can be trained to use a litter box. Opossum learn to lap food from a dish, but baby squirrels must be syringe fed.”

Turtles are another typical patient. “Dogs find them fascinating as a chew toy, ” Clement continues. “Some of our turtles’ shells have canine teeth prints.

Before getting ideas about raising wildlife, remember, in most cases it is illegal to keep these critters as pets. The center has special licensing to do so. But you can still help.

Although housed at the environmental center, the wildlife rehabilitation program receives no county-school funding, which means it relies on donations to operate. I know two free-flying owls, a friendly crow, and a menagerie of feathered and furry friends, who would thank you for your support.

text and photos by Emmett Burnett