A historic home may be an unconventional place to house a brewery. But Ferus by the Bay makes it look like an obvious choice.

To owner Coby Lake, who lived across the street from the Irwin-Sandoz-Jones house, it was. Soon, Lake’s business partner, Alan Alford, moved from Birmingham to Fairhope with his wife Kathy to manage the brewery, which opened in May as the third Ferus location and first in south Alabama.

Ferus by the Bay is a more upscale iteration of the Ferus breweries based in Birmingham and Trussville. Besides beverages, finer food and seasonal items, weekend specials are on hand. But don’t let this fool you; Ferus has a wild side — literally.

“‘Ferus’ is Latin for ‘feral,’” Alford says. “It’s a play off the wild yeast we use in the open fermentation process for our beers.” This theme is also present in the interior décor created by Kate Hartman Interiors. Warm green walls bring the spirit of nature indoors, and antlers, a key part of Ferus’ branding, are prominent, even adorning the beer tap handles. It all works well against the historic elements present in the 1921 home-turned-brewery. General contractor J.R. Robinson Construction Co. is the one to thank for the preservation.

Samuel Mcmonigal is the chef and mastermind behind the Fairhope menu. Having previously worked at the first two locations, his menu consists of trusty Ferus staples, but he also added Fairhope-specific dishes, all of which pair well with one of the many beers on tap brewed at the Birmingham production facility. Locals have been quick to embrace the hot veggie plate. The shrimp and grits, with a kick of Cajun flavor, were crafted specifically for the Bay clientele. Lest it forgets its roots, Ferus also serves traditional brewery fare, including its signature Smashburger and loaded fries topped with house-made beer cheddar sauce.

“One of my favorite things to say is that food doesn’t have to be complicated to be good,” says Mcmonigal. “Food is kind of like music: you can’t do something new, but you can take something you know and do it really well.”

With its wide-ranging menu and friendly atmosphere, Ferus by the Bay is clearly doing just that on the corner of Church Street and De La Mare Avenue. 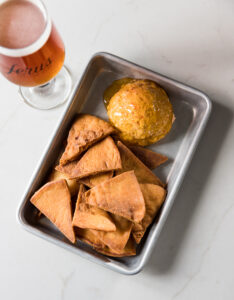 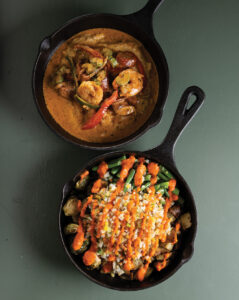 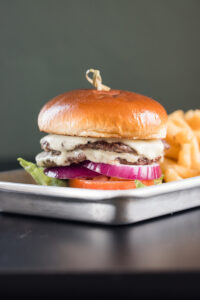 Shrimp and grits
Sauteed shrimp and smoked sausage are paired with the holy trinity and served over bourbon cheddar grits with blackened butter cream sauce. This is a dish you don’t want to miss.

Pimento Cheese
House-made pimento cheese is given a kick from a generous helping of sweet and spicy pepper jelly. Crispy fried pita chips make this dish the perfect appetizer.

Hot Veggie Plate
Loaded with green beans, brussels sprouts, vegetable confetti and roasted red potatoes with garlic and herbs, this plate is topped with a drizzle of red pepper aioli to complete the Fairhope favorite.

Loaded Beer Cheese Fries
Crispy fries are doused in a bechamel beer cheese sauce and sprinkled with bacon, sour cream and green onions. Grab a beer and you’re all set.