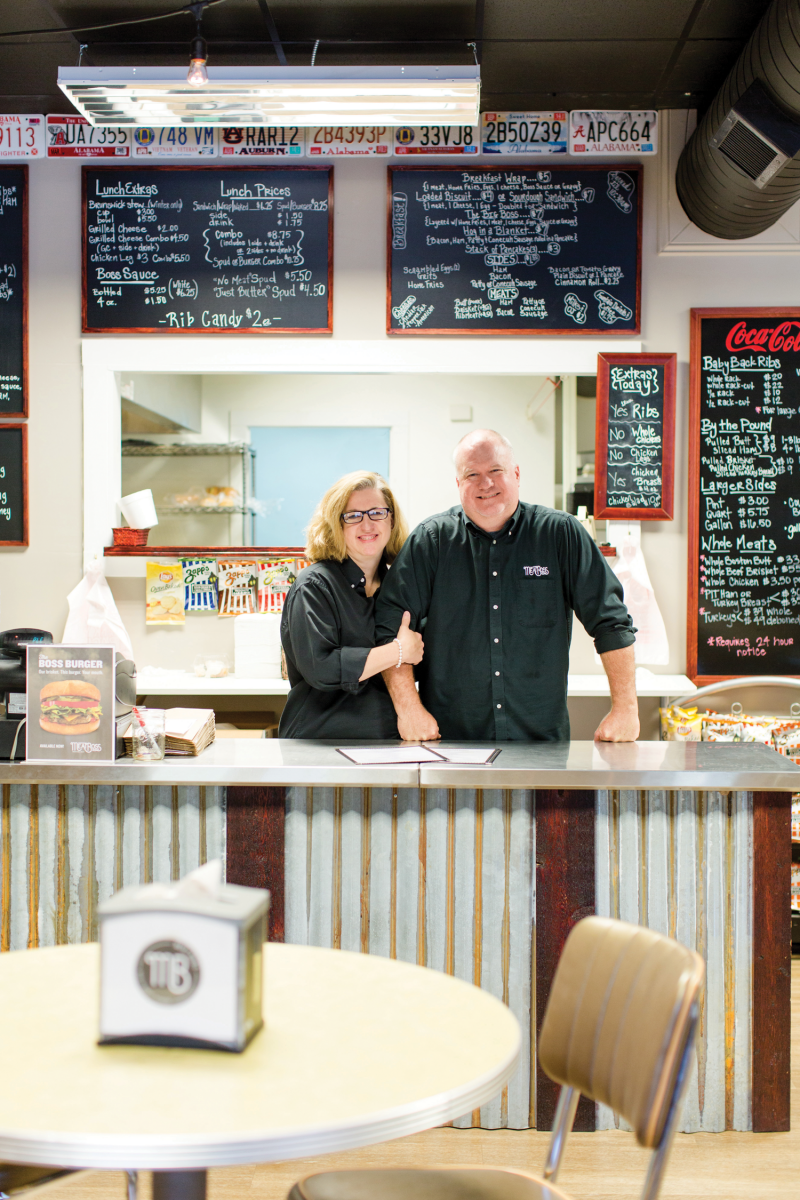 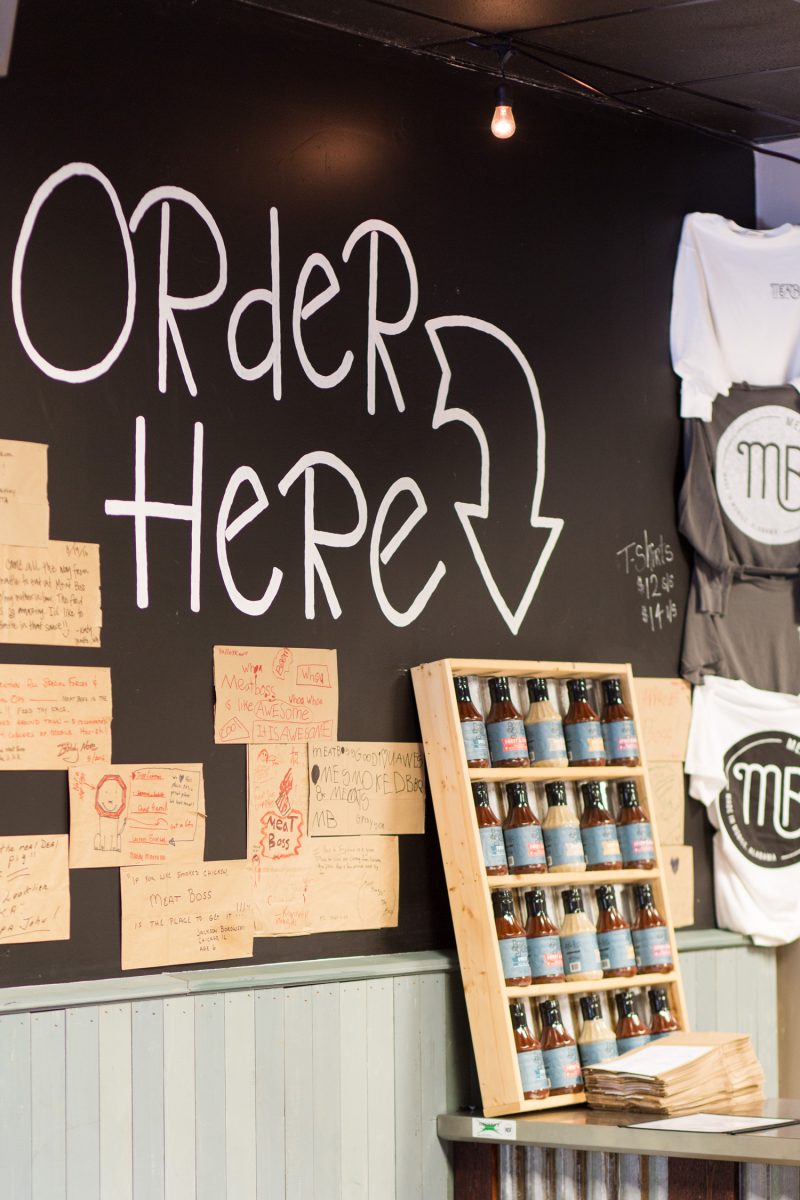 ABOVE What started as a single-window takeout hole-in-the-wall barbecue secret has grown into a beloved, constantly packed West Mobile staple. Dine in or take out breakfast or lunch. Owners Dara and Benny Chinnis take pride in their approach to food and the community around it. Customers leave notes and rave reviews on paper bags taped to the chalkboard walls. Photos by Elizabeth Gelineau

Impeccable barbecue and genuine hospitality — these two ingredients are the secret to the exploding success of Meat Boss, the tiny barbecue joint in West Mobile that isn’t quite so itty-bitty anymore.

Meat Boss started as a takeout counter, “like an indoor food truck, ” says Dara Chinnis, who owns the restaurant with her husband, Benny. Since 2012, they’ve been steadily increasing their devoted fanbase. Business expanded one catering order at a time, each customer producing several others through word of mouth.

“We never advertised, ” Dara says. “People would just come in after they had our food at a party or heard about us from a friend. And we literally have grown every week since then.”

Benny and Dara have built their success around excellence verging on obsession. Benny has painstakingly perfected the menu, spending many nights tending smokers and testing sauce recipes. Along the way, he’s managed to establish a distinct style in the crowded Gulf Coast barbecue market.

“Nothing we do is mainstream, ” Benny says. “We don’t do anything like somebody else would do it.”

The menu item that draws customers from as far as Fort Worth, Texas, is Benny’s melt-in-your-mouth pulled brisket. That’s right — this brisket is pulled, not sliced.

“Most brisket I’ve eaten seems to be on the tough, dry side, ” Benny says. “We cook it at a hotter temperature and leave it on the smoker longer. It gets so tender and pulls just like pork. That’s just the way I’ve always cooked it.”

At first, people were hesitant to try the brisket, but it caught on quickly. “Once they tried it, they were hooked, ” Dara says.

While Benny is a perfectionist in the kitchen, Dara’s attention to detail in the front of the house has created a welcoming, efficient environment in a constantly packed barbecue joint that serves its food wrapped in foil and stuffed into brown paper bags. At lunchtime, the line may extend out the door, and cars have to park along the nearby roads because the parking lot is full to bursting with hungry diners.

“We feel like when people come in that door, they’re coming to our house for dinner, ” Benny says. “We don’t do customer service. We do hospitality.”

The restaurant’s original made-to-order lunch menu takes decades-old staples and adds their own Boss twist. With a foundation of traditional barbecue meats, a multitude of choices showcase the variety and uniqueness of the Boss’s cooking. Choices include five flavors of Boss Sauce and a long list of fun toppings, such as jalapeño jelly, pickles, horse-radish sauce and cheese. There are traditional barbecue sides, and you can eat your meat atop bread, on a spud or naked.

The Meat Boss and Lady Boss continually switch up the offerings for their inventive breakfasts and way-above-average burgers. Around holidays, they serve up smoked ham, turkey, pork loin and Conecuh sausage. Boss Sauce is also sold in bottles, and just about any meat that can be smoked is available as a whole meat order for events that aren’t quite big enough for full-fledged catering.

“We just want to keep it interesting, so we’re always adding to it, ” Dara says. 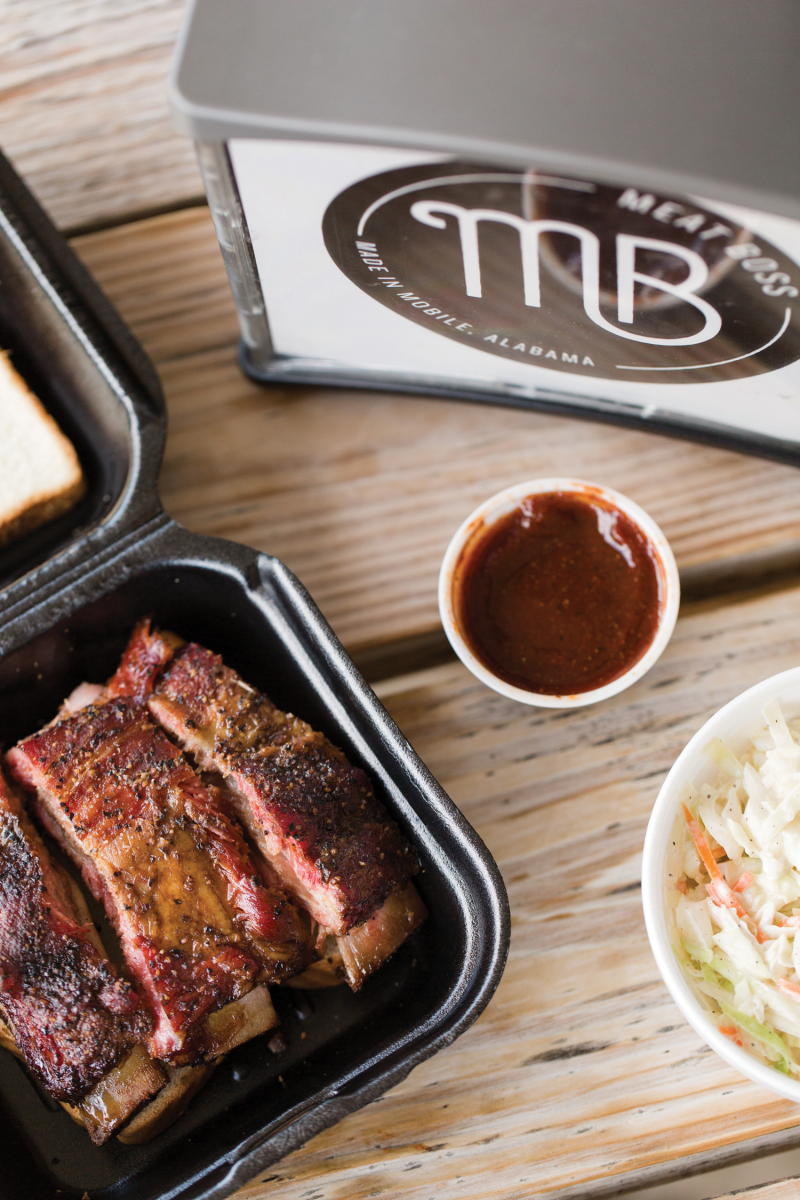 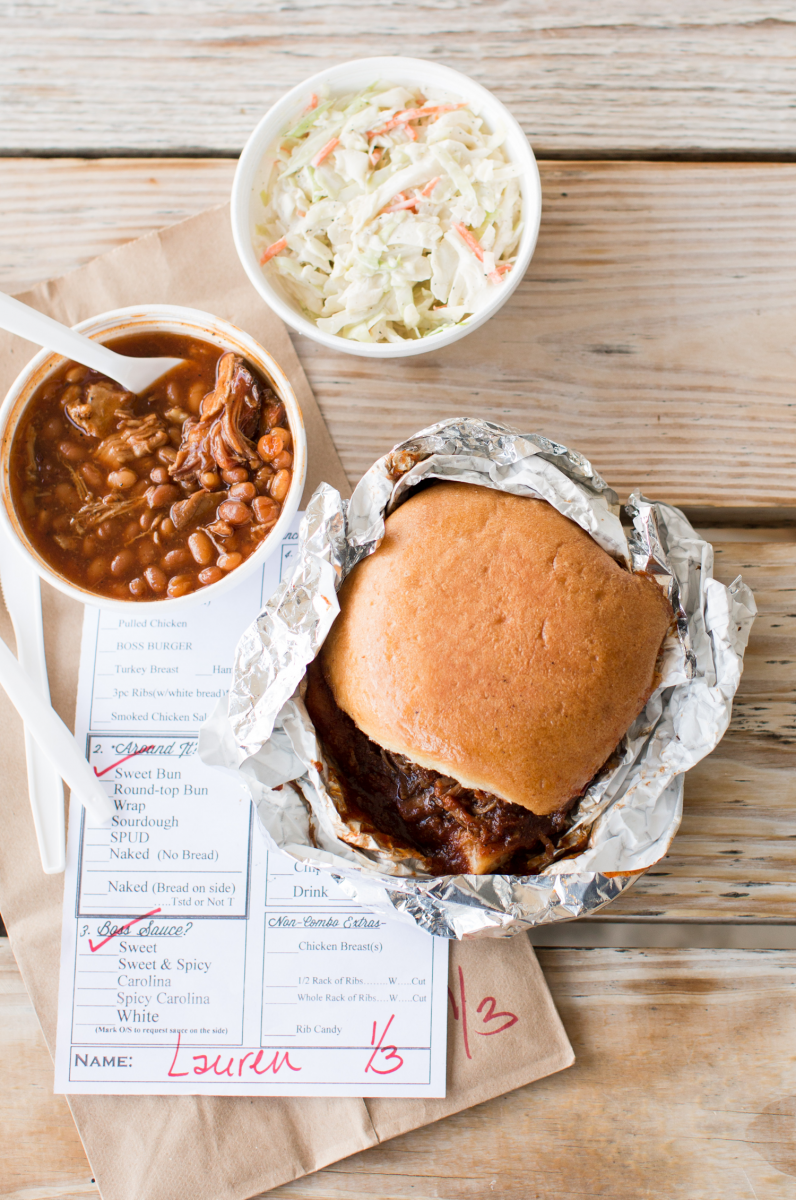 Brisket Sandwich
Meat Boss’ famous brisket is so tender you might cry. Put it on a toasted sweet bun, round-top bun, wrap, sourdough bread, on a spud, or enjoy it naked, with or without Boss Sauce (sweet, sweet and spicy, Carolina, Spicy Carolina or White BBQ). It’s great with pickles on top.

Baby Back Pork Ribs
Served with two slices of white bread and sauce on the side, these perfectly tender ribs are effortless to enjoy.

The Spud
The largest russet potato you’ve ever seen is stuffed with your choice of pulled pork, beef brisket, chicken, turkey or ham and topped with cheddar cheese and one of five varieties of delicious Boss Sauce.

Hog in a Blanket
Looking for a breakfast feast? Try this decadent creation: a huge, buttery pancake stuffed with bacon, ham, breakfast sausage and Conecuh sausage. Drench it in syrup for a smoky-sweet treat. 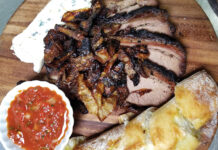