I have a lot of names, ” Ilinca de Hueck admits with a twinkling smile. She takes my pen and notepad and begins to explain.

There’s the name she was given upon her birth in Romania: Elena Stcherbatchew. There’s the stage name she adopted when she became an Eastern Bloc pop singer and movie star: Ilinca Cerbacev. And then there’s the aforementioned name, Ilinca de Hueck, which she took from her husband, now deceased, when in 1973 she left behind a singing career and movie deal in Paris to move to his home in Mobile.

These three names, which roll from her tongue with a Romanian purr, effortlessly divide Ilinca de Hueck’s life into chapters like a biographer’s dream.

It’s not every day you meet somebody like Ilinca, so even though I was only about 8 years old, I remember our first encounter well. My mom and Ilinca had worked the night shift together at Mobile Infirmary for years and remained close friends after Ilinca’s retirement. From that first visit, I can still picture her glowing living room, smell the exotic candles and hear her doting voice with its thick, foreign accent. I absorbed all the pieces of her tale that an 8-year-old mind could grasp. But it would be another 18 years until I was lucky enough to hear the rest of the story.

At an assisted living facility, I sit next to Ilinca with one of her scrapbooks on my knees. As she shares stories, she throws her head back with frequent laughter, and I realize that I have never met anyone whose eyes can smile quite like hers.

Among her many talents, this humble woman is especially adept at brushing off compliments.

“You are gorgeous in these photo-graphs, ” I tell her.

“Oh, everyone is beautiful when they are young, ” she dismisses with a flick of her wrist.

“Oh, only in Romania, ” she minimizes her feat.

I come to realize that Ilinca’s selflessness adds as much charm to her personality as it does mystery. Because in the end, it makes you wonder: Which stories did she leave out?

On March 11, 1931, Elena Stcherbatchew was born in Bucharest, Romania, to a Russian father and a Romanian mother. Her father, Nikita, a Russian diplomat, was the only member of his noble family to escape Russia with his life during the 1917 revolution — the uprising that led to the eventual rise of the communist Soviet Union. In Romania, he found refuge and a wife. As the communist storm gathered in Russia, Nikita and wife Ana started a small family in Bucharest.

My first order of business is to clear up any name confusion. “Elena is the name I have on all of my official papers, but I prefer my nickname ‘Ilinca, ’” she explains. “Because ‘Ilinca’ reminds me of when I was a little girl. Everybody called me that.”

Ilinca describes her early childhood in Bucharest with warm fondness. “We played, we rode our horses, we had a carriage that we’d take through the woods. It was … Ah! It was so fantastic.”

At her family’s mountain house in Sinaia, Romania, Ilinca and her two siblings spent their winters exploring the mountains and learning to snow ski.

When she was not even 10 years old, life quickly changed. “When the World War started, it was very difficult, ” she says. In 1940, the Nazis occupied Romania as part of Hitler’s effort to intimidate the Soviet Union with a strong eastern front. Ilinca describes how her family allowed some Jewish friends to hide in their pantry during those terrifying days. When the Russians finally pushed back against Germany,  it only exacerbated the situation.

“When the Russians came, it was even worse, ” she explains. “My father was scared to death that the Russians were going to find out that he was from a noble Russian family, ” which would have made him an enemy of the communist regime.

“First, we were scared to death of the Germans, because they would come to our home.” Ilinca raps four knocks on the wooden coffee table for effect and acts out a scene.

“‘Gestapo, open the door!’” she mimics in a gruff voice.

“And we were all afraid to open the door. And then after World War II,  the communists came!” She raps four more times.

“And then one day.” Four more raps.

“This was a joke at the time, because we were so afraid of the police that a burglar was something new!” she laughs. 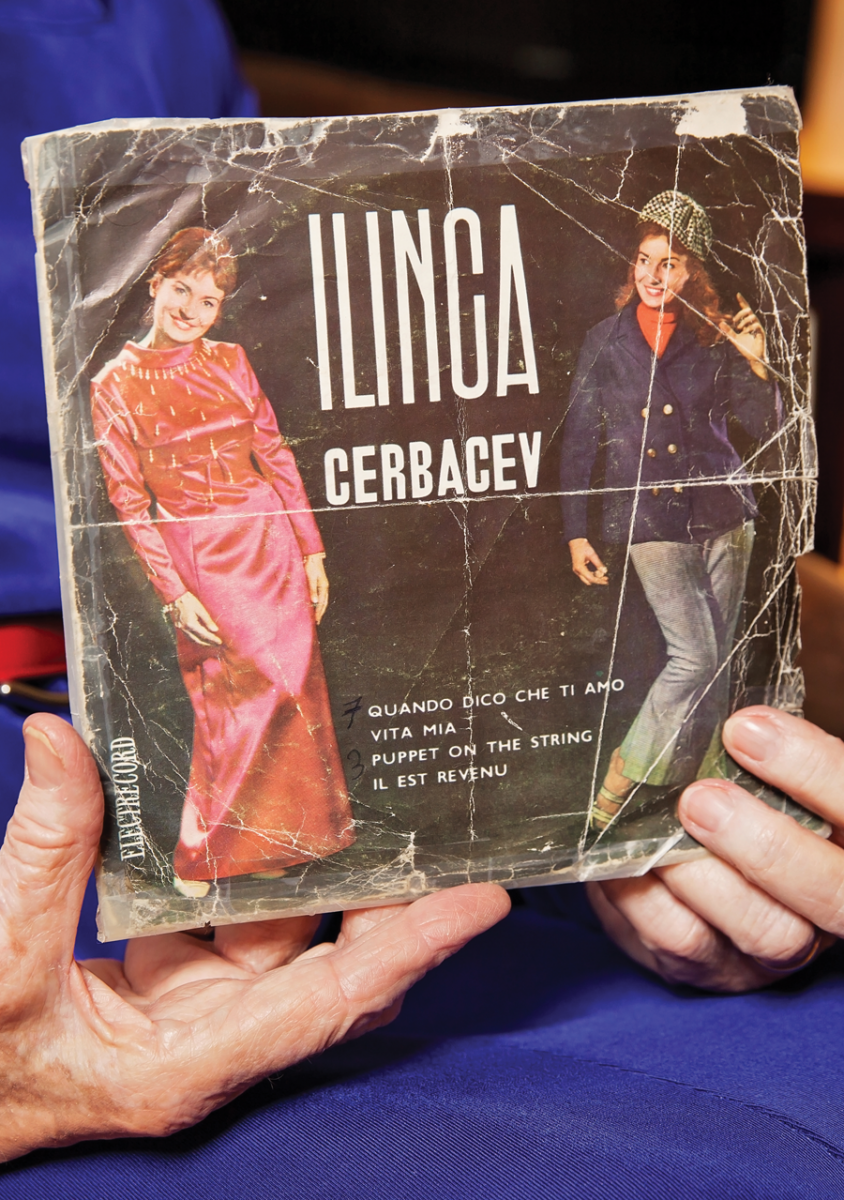 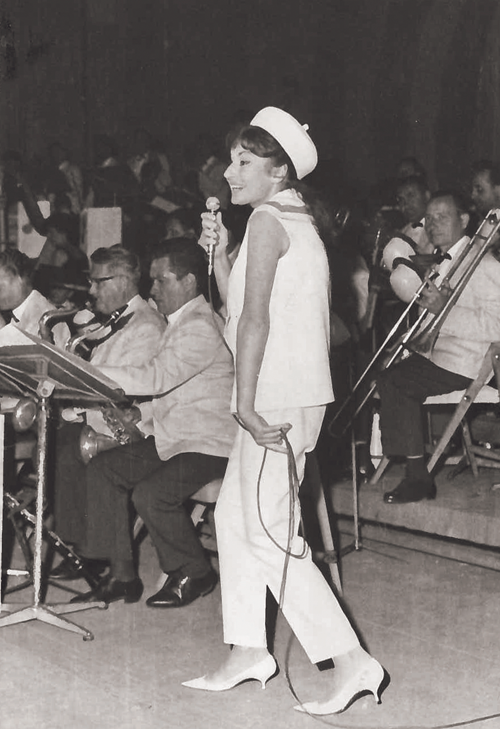 ABOVE When Ilinca began her singing career, she went by her stage name Ilinca Cerbacev, which was much easier to pronounce than Ilinca Stcherbatchew.

But through it all — the Germans, Russians and burglars — there remained one constant. “Singing was always my interest, ” she says. “I’d listen to Frank Sinatra and American jazz. That [music] was my life! I was just dreaming that I’d get to go to America someday. Dreaming, dreaming, even daydreaming!” she exclaims.

Then, one day, on a beach bordering the Black Sea, a record producer happened to overhear Ilinca singing for her brother and sister. He asked if she would like to sing in a concert series he was putting on. She agreed.

At one of these shows, the most embarrassing moment of Ilinca’s life also changed it forever. Singing and dancing in a mini-skirt in front of an enormous orchestra and thousands of her countrymen, Ilinca felt her underpants beginning to fall. She desperately tried to hold them up without interrupting her routine.

“And all of a sudden, they fell down, ” she says, horrified to this day. “So I took them and did like this!” she says, spinning imaginary underwear over her head.

The crowd went wild, chanting “IL-IN-CA” and “Bis!” (meaning “Encore!”). “The orchestra was screaming with laughter. I was so embarrassed! But because of that and all the newspapers writing about it, the people loved me more and more, and I became more known.”

Ilinca’s singing career took her across Europe to perform in concert halls with her band and, occasionally, a full orchestra. She cut pop records, acted in Romanian remakes of American movies (such as that country’s version of “Sun Valley Serenade”) and married a famous Romanian actor. Did I mention she was also one of Romania’s champion skiers? “The French and Swiss would come to Romania and compete against our team, ” she explains. Her singing career, high-profile marriage and prowess on the slopes eventually led to fame — for better or for worse. “You can’t eat in restaurants; you can’t do anything, because people are looking at you and approaching you, ” Ilinca says. “That is the worst thing when you are so known. I hated that side of everything.”

As her fame steadily intensified, Ilinca increasingly became the poster child for Romania’s communist government, singing, acting and skiing to make life safer for her family. “[The government] wanted me to ski for Romania and to sing for Romania. I was so important to them because they would send me to perform in different countries. When I started to be better known, they were less likely to do something bad to my family.”

For Ilinca, it was always about her family. “All my money [from performing] was spent for my family. And the boys in my band would laugh at me saying, ‘Look, she’s stingy; she doesn’t want to spend money!’ It was always hard to be away from my family.” 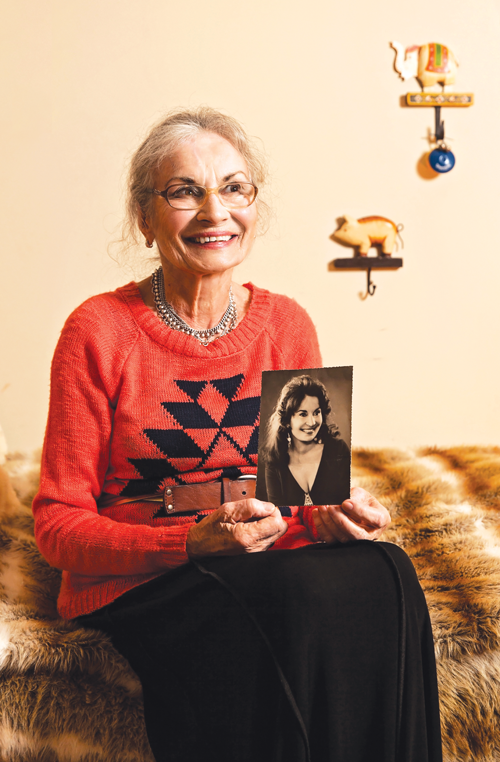 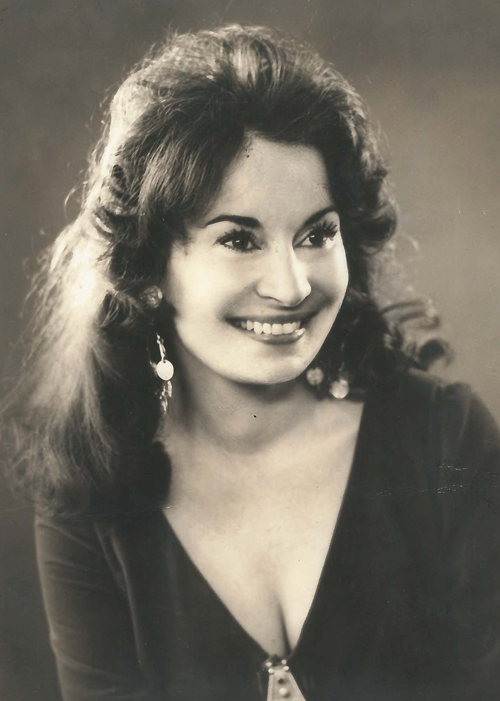 ABOVE This photo from the early ’70s was taken while Ilinca was living and performing in Paris at the behest of the Romanian government.

In the early 1970s, Ilinca was living and performing in Paris under the condition that she forfeit a large portion of her income to the Romanian government. Long since separated from her first husband, it was here that she met George de Hueck, a Canadian running an international consulting service in Mobile. Despite having agreed to a movie deal in Paris, Ilinca accepted George’s marriage proposal and prepared to relocate to his Alabama home in 1973.

“It was like I was in a dream, ” she says of moving to Mobile. “Even now,  I get goose bumps. Mobile for me is like home.” That being said, not everything about the move was perfect.

“It was very, very hard to leave my career, ” Ilinca admits. She sang when she could, once for a show at the University of South Alabama and once at GreekFest. Over time, Ilinca’s performances were relegated to the privacy of her home, strumming a guitar she taught herself to play in her later years.

When George developed health problems, Ilinca went to LPN school (licensed practical nursing) and got a job at Mobile Infirmary to financially support herself and her husband. It was here, under the florescent lights of the night shift, that she first crossed paths with my mom.

“I’m happy because I’m still here, first of all, ” Ilinca tells me today. “That’s the most important thing.” After her husband passed away in 1991, Ilinca continued working at Mobile Infirmary for another four years before retiring.

Today, Ilinca modestly describes herself as a woman with a lot of names, but she’s much more than that. And at the risk of bestowing her with too many titles, I’m tempted to add one more. Ilinca de Hueck — Mobile’s Romanian gem.