Sometimes, nothing beats a good old-fashioned grilled cheese. The classic combination of two slices of bread and a hunk of cheese boasts notable powers, such as curing the common cold, teleporting tasters back to their childhoods and lifting spirits in general. But, as most college kids can attest, occasionally, the gold standard can get a little boring. The recipes that follow offer easy ways to liven up the signature sandwich. Since even the simplest of dishes can be a little tricky (especially if you are a novice in the kitchen), check out the helpful hints below so you don’t end up with a bunch of burnt cheese toast.

■  Always butter both sides of the bread.
■  When in doubt, add more cheese.
■  Always cook on low to medium heat.
■  The more grated the cheese, the better it will melt.
■  Lightly toast each slice of bread separately, then fill, assemble and toast again.

Attention purists, sample this version (pictured above) that doesn’t stray too far from the original mold. The crispy Parmesan-coated crust is the standout of this cheddar, Swiss and provolone collaboration.

1. Butter both sides of two slices of bread. Put both in skillet on medium heat. Lightly toast for 2 minutes.
2. Sprinkle with grated Parmesan cheese, then carefully flip with spatula so Parmesan side is facing down.
3. Sprinkle other sides with grated cheddar, provolone and Swiss.
4. Once the Parmesan sides turn golden brown, assemble the sandwich.
5. Cook over medium heat, flipping occasionally, until cheese is melted. Makes 1. 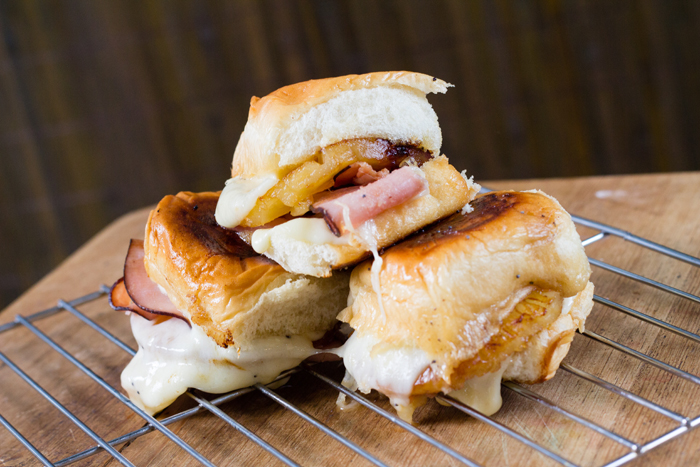 This combo of seared pineapple, ham and provolone on fluffy Hawaiian bread drizzled in poppy seed butter is a sweet, light option featuring flavors from the island state.

1. In a small bowl, combine butter and poppy seeds. Brush on outside of roll.
2. Cook bread, butter side down, in skillet on medium heat, until lightly browned.
3. Spread cream cheese on inside of bottom slice.
4. Layer top to bottom: bread, cheese, pineapple, cheese, ham, bread.
5. Place assembled sandwich on cookie sheet. Bake until cheese is melted and ham and pineapple are warm. Makes 1.

A twist on Elvis’ iconic PB & B, this melding of Nutella, mascarpone and sliced bananas on sourdough will have your kids saying, “Thank you, thank you very much.”

1. Sauté spinach in olive oil and minced garlic.
2. In a small bowl, mix together artichokes, sundried tomatoes, spinach, sour cream, cream cheese and Parmesan cheese.
3. Butter both sides of the pieces of bread.
4. Heat a skillet on low-to-medium heat. Place bread in skillet.
5. Flip bread once toasted. Place a slice of Swiss cheese on each piece of bread.
6. Spread spinach and artichoke mixture on bottom piece of bread. Top with top slice of bread.
7. Once bottom is nice and golden, flip to toast the other side.
8. When that side is golden, remove from heat. Makes 1.

Say hello to our new favorite summer sandwich. Fresh blackberries muddled with crisp basil are a sweet, fruity twist on the savory classic.

1. In a large bowl, mash blackberries and stir in chopped basil. Heat an electric griddle or large skillet over medium-low heat.
2. Brush each piece of bread with olive oil. In another skillet or griddle, place 4 pieces of bread.
3. Lay a piece of cheese on each slice of bread, then top with a few spoonfuls of smashed blackberries.
4. Brush the remaining pieces of bread with olive oil and place on top.
5. Once the bottom of the bread is golden, flip and cook until the other side is equally golden. Makes 4. 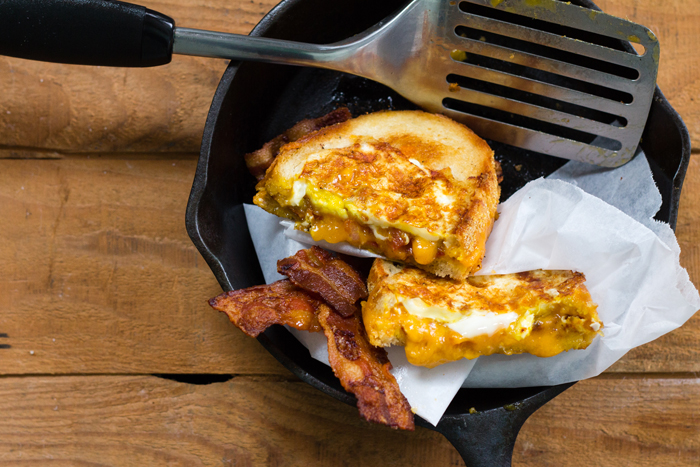 The childhood morning meal staple egg-in-a-hole is even more tempting with the addition of bacon and cheddar cheese.

1. Butter both slices of bread. Heat butter in a saucepan over medium heat.
2. Use a mug to make a hole in one slice of bread. Put this slice in saucepan.
3. Crack egg directly into the hole. Place other slice in saucepan. Let cook for a few minutes until the egg is cooked and becomes solid. Flip both slices.
4. Add slice of bacon to each slice and then cover with cheddar. Once cheddar begins to melt, put sandwich together. Flip. Continue cooking until cheddar is fully melted. Makes 1.

This sandwich has everything you love about the boot country’s cuisine rolled into one – mozzarella, marinara, pepperoni, Parmesan and Italian bread. Bellissimo!

1. Butter both sides of both slices and place in skillet under medium heat.
2. Mix together ricotta, Parmesan and marinara sauce. Spread on both sides.
3. Top each with 3 pepperonis and then mozzarella. Let sit for 2 – 3 minutes.
4. Assemble and cook, flipping occasionally, until mozzarella is melted. Makes 1.

Sturdy potato bread serves as the foundation for cheddar and Colby Jack smattered with slivers of green onions and crumbled bacon. For extra flavor and creaminess, add a dollop of tangy sour cream to this reincarnation of the classic side dish.

1. Cook and crumble bacon.
2. Warm a skillet on low-to-medium heat.
3. Butter both sides of the bread and place in warm skillet.
4. Once lightly toasted, flip the bread.
5. Place Colby Jack, cheddar, bacon and onions on one piece of bread. Place other piece of bread on top.
6. Once the bottom is golden, flip.
7. When both sides are golden, remove from heat. Garnish with sour cream. Makes 1.

Kalamata olives, diced tomatoes, purple onion and feta create a bold, fresh combination. Layer the mixture with mozzarella on whole-wheat toast for a healthier, yet still cheesy, rendition of the comfort-food staple.

1. Heat 1 teaspoon of olive oil in a nonstick skillet over medium-high heat. Once hot, add garlic and spinach, sauté until spinach begins to wilt. Remove from heat, stir in basil and set aside.
2. In a bowl, mix together spinach mixture, feta, tomatoes, olives, purple onion, cucumber and black pepper.
3. Spread mozzarella over one slice of bread into an even layer.
4. Sprinkle with tomato, spinach and purple onion mixture and top with remaining slice of bread.
5. Spread 1 teaspoon of olive oil evenly over skillet, add sandwich and heat over medium-low heat. Cook about 3 – 4 minutes or until golden brown. Spread remaining olive oil evenly along skillet and rotate sandwich. Cover and cook 2 – 3 minutes. Makes 1. 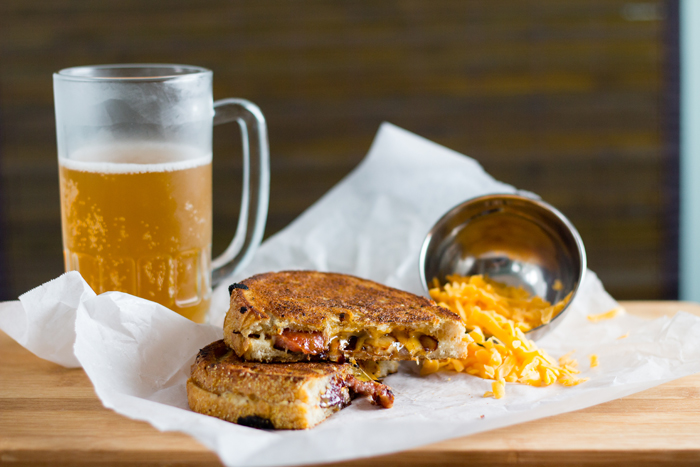 Cheddar and Gouda join in melty goodness between pieces of sourdough. Conecuh sausage and onions sautéed in beer and Worcestershire sauce give the sandwich an added kick.

1. In a skillet, heat olive oil, and sauté onion, beer, Worcestershire sauce and oregano.
2. Cook Conecuh sausage in a separate skillet.
3. Butter both sides of the bread and then cook.
4. Top one slice of bread with cheddar and Gouda. Add in the onions, oregano and sausage.
5. Top with other slice of bread and cook until cheese is well melted and both sides of the sandwich are golden brown. Makes 2.

1. Heat skillet on high heat. Once hot, switch to low. Lightly coat bread with oil.
2. Spread goat cheese on the bottom slice, then layer cucumber slices on top. Season with salt and pepper, if desired. Place bottom slice in the skillet.
3. Then, on the top slice of bread, add another layer of goat cheese. Place it on top of the first one.
4. Make sure your heat is on low, and cook for about 5 minutes.
5. Once the bottom side is nice and golden brown, flip the sandwich carefully. When the second side is golden, remove the sandwich from the pan.
Makes 1.

Sautéed onions, green peppers and jalapeños meld with chipotle-spiked cheddar and Monterey Jack cheese on sourdough bread, inducing a mouthwatering fiesta. Add crumbled tortilla chips in the middle for an unexpected twist. Top it off with more jalapeños and salsa.

1. In a skillet, sauté green pepper, onions and jalapeños in olive oil and sprinkle with chipotle powder.
2. Butter slices of bread on both sides. Place bread in a separate skillet.
3. Top with one slice of Monterey Jack. Add bell pepper, onions, jalapeños, crumbled tortilla chips and shredded cheddar. Top with second slice of bread. Cook until both sides are golden brown, then remove from heat. Serve with remaining chips and salsa. Makes 2.

Mushroom lovers will swoon over this hearty, cheesy concoction.

1. Preheat oven broiler.
2. Spread butter on crust sides of bread. Set aside.
3. In a small bowl, combine olive oil, balsamic vinegar, thyme and garlic. Use a basting brush to coat both sides of the mushroom.
4. Place under broiler for about 2 – 3 minutes, then flip and cook for another 2 – 3 minutes, or until tender.
5. On the inside of the top slice of bread, spread mayonnaise and capers. Top with provolone cheese slice.
6. Spread goat cheese on inside of bottom slice of bread. Place roasted mushroom cap in the middle of the two bread slices.
7. Cook in a skillet over medium heat until outside is toasted and inside is gooey. Makes 1.