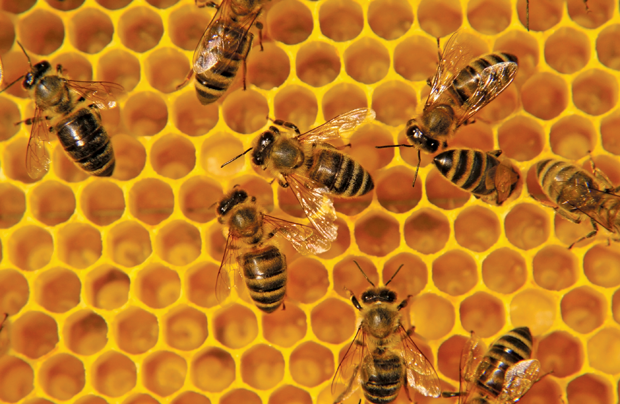 Not long ago, if I saw an insect that threatened to sting me, I wanted it dead. Bees were no exception; to me, they were no different than wasps and hornets. Now, I know that there is a difference between bumblebees and carpenter bees and honeybees — and wasps and hornets for that matter. I learned this from the Honeybee Man.

My bee adventure started when I noticed a sticky, black substance oozing from my bedroom ceiling. Upon close inspection, I thought I heard a steady humming sound coming from behind the ooze. I walked outside and saw a line of bees that stretched as far as I could see. They were going in and out of a small hole in my wall about the size of a pencil eraser.

I called some local pest control experts. To my surprise, they all refused to exterminate the bees. “Honeybees are an endangered species, ” they said. Then someone told me I should call an apiarist, which I learned was a fancy word for a beekeeper. So I called Freddy Powell and left a message on his answering machine. He called me back immediately. This man’s interest in bees was intense. He assured me that he was the man for the situation and congratulated me on being lucky enough to have my own wild honeybees, like it was the biggest honor I could have hoped for.

Powell had a full-time job running a printing business, he told me. There wasn’t as much demand as I might think for honeybee extractors. But when he got wind of a bee job, he dropped everything he was doing and put the “Closed” sign on the door of his print shop. He wanted to get started on my bees right away.

He arrived promptly at 8 o’clock the next morning. He drove a wrecked-several-times, bumblebee yellow, Subaru hatchback with “Freddy Powell, Beekeeper, ‘I Bee Your Honeybee Man’” handwritten on the side. He was a little fellow in his early 60s, and his energy matched his enthusiasm over the phone. He popped the hatchback to his honeybee car and began pulling out ladders and Rubbermaid baskets and lighter fluid and hoses and a vacuum cleaner and extension cords and bee clothing and kitchen knives and shovels and 5-gallon buckets. He piled all this behind the car and began to assemble a Dr. Suess-like contraption. His own invention, he informed me.

It worked like this: A Rubbermaid storage bin, about the size of a laundry basket, was filled with the same artificial honeycomb slats that one would find inside of a real bee box. Imagine if you took the suction hose off a vacuum cleaner and cut it in half. Then you attached these two pieces to each end of the storage bin. Anything you sucked up would pass through the bin. This is exactly the contraption he had. He would suck the bees into the bin, take them home and transfer them to a real bee box. Although, he assured me, they loved his box and would just as soon stay there if he let them.

Powell spent about 15 minutes scampering around inside the house and listening to the walls and floors and ceiling. Once he was satisfied that the bee colony was isolated to the spot over my ceiling, he was ready to get to work.

“Will I get any honey?” I inquired of him. I cannot imagine a question that could have excited him more. He spent 15 minutes telling me all he could about how good the honey would be and what the best honey he ever had was and where he had found this honey. After this discourse, he asked me if there was anyone I wanted to invite over to watch the bees. I could see that it would hurt his feelings if I didn’t, so I called my father.

After Dad arrived, Mr. Powell went about his work. He set an extension ladder against the outside of my house and used a thin saw to enlarge the bee’s entrance hole. Then he dropped the netting of the bee hat over his face and began to pump smoke into the hole from a little smoldering bee smoker. Thousands of bees began to swarm. He set the smoker down, grabbed the awkward looking vacuum and began sucking them up.

I was surprised that all he wore was headgear. His hands and arms were bare and covered with bees. I asked him about this, and he said the smoke made the bees hungry. They would eventually go back inside and eat their honey until they were stuffed. Then they would snuggle up in their honeycomb and act lazy. “Besides, ” he said, “I’ve developed immunity to bee stings.”

Powell would suck for a while then get his kitchen knife and cut a rectangle of honeycomb from their hive and drop it into one of the 5-gallon buckets. The size of the honeycomb was 4-by-16 inches, exactly the length and width of the space above my ceiling. These rectangles lay one in front of the next, each covered with bees that he would vacuum as though he were cleaning a car mat. He said that the queen would be at the very back with most of the bees guarding her. Once he had the queen, the other bees would abandon the hive.

Mr. Powell showed me the bee larvae in the honeycombs he removed and pointed out the drones (males), workers (undeveloped females that will never be queens) and the future queens. That long line of bees I’d been seeing were the workers collecting pollen. He said they could smell their own hive from five miles away.

The queen is the largest bee in the hive. She is also the only female in the hive that can have babies and will lay about 3, 000 eggs a day. The reigning queen will kill most of the unborn queens, but some will hatch and leave the hive, taking half of the population with them.

The worker bees collect the pollen and can sting. They will live about a month, providing food and protection for their queen and her larvae. Besides making the wax to build the honeycombs, they also keep the hive cool by buzzing around it and fanning their wings.

The drones have no stingers and do not collect pollen. All they do is mate with the queen and will be driven from the hive if there is a food shortage. Mr. Powell held a drone out for me to hold, but I declined as it looked no different than a worker bee to me.

When there were no more bees to vacuum, the Honeybee Man came down the ladder and motioned for us to gather around the Rubbermaid bin. He opened the top and proudly displayed his new bees. I couldn’t believe how many were in there. And, as he’d predicted, they all appeared comfortable in their new home.

Powell said he had removed 10 honeycombs and close to 60, 000 bees from my wall. “Average load, ” he said proudly. Dad and I reached into the 5-gallon bucket and scraped a little honey off the honeycombs with our fingers. It was delicious. Unfortunately, there was not enough to make a full jar. It was too early in the season, Powell told me.

So, a honeybee is not a wasp and it is not a hornet. And, if you have more patience than me, perhaps you can get the honey that I don’t have.