Following the Civil War, Mobile was slow to recover, but as the decades passed, things steadily improved. Business and civic leaders pursued better water and rail connections with Birmingham and the mineral belt of north Alabama and rejoiced as the U.S. Army Corps of Engineers deepened the ship channel out to the Gulf. By 1881, the L&N Railroad provided easier access to Birmingham, allowing large coal shipments to pass through our port, and five years later Mobile was exporting Alabama coal to Cuba. In addition to coal, lumber became an important product for the port. Saw mills produced planks, barrel staves and shingles of white oak, cypress and pine. Banana imports grew and lent the waterfront an exotic, tropical flavor.

The Development of New Thoroughfares

Meanwhile, the town grid steadily expanded in a broad, fan-like pattern out from the river. Each of Mobile’s streets had its distinctive attributes. Hard by the river, Commerce, Front and Water streets were the domain of cotton factor offices, hardware stores, cotton warehouses, steamboat ticket offices and oyster dives. Marching west, Royal was a business street as well, with hotels, bars, restaurants, coffee saloons, a post office, the courthouse and city hall. Dauphin Street, dating from Colonial times, ran west and was the commercial heart of Downtown, lined with retail shops — clothing, shoes, tools, jewelry, books and stationery — and apartments. The banks, six of them in 1880, as well as the insurance companies, were all on St. Francis Street. The lawyers were mostly on Conti. Downtown’s great centerpiece, of course, was shade-filled Bienville Square, dating from the 1830s. The Mobile Daily Advertiser extolled it as “really a most pleasing resort” and a favorite spot of “the nursery maids of the city, who ‘dump’ their young charges on the verdant grass and watch their happy rompings with delight.”

Not surprising for a seaport, there was also a red-light district “set aside by law for the fast women.” Bounded by St. Michael, St. Louis, Lawrence and Warren streets Downtown, this “Tenderloin” district was packed with bars, smoke shops, “Ladies Cafes” and whorehouses. A turn-of-the-century guidebook to this area assured its readers of all the best information for navigating the potentially treacherous terrain. If read carefully, its author declared, “you know who is who and the best place to go spend your time and money.” The various houses, with their madams, telephone numbers and the girls’ names, were listed on page after page. The guide also listed the women’s races: “White, Black or Octoroon.” Madam Rosa Lee ran an establishment with four girls of the latter classification, among them Lorie Dreyfus and Lizzie Alexander.

Of more interest to the city’s respectable visitors was the Bay Shell Road, which ran south along the waterfront from Frascati Park. Local poet Thomas Cooper De Leon described it as “Mobile’s great show point.” Paved clean and smooth with mussel shells, the road “gives view of the sea and shipping on one hand, ” De Leon wrote, “of flower-hidden dwellings on the other for good six miles.” Virtually everyone who visited Mobile took a ride down the Bay Shell Road, and in 1892 a Kansas journalist charmingly described it as “a long wavy ribbon of white, now visible, again hidden from sight by the stately magnolias and cypress.” 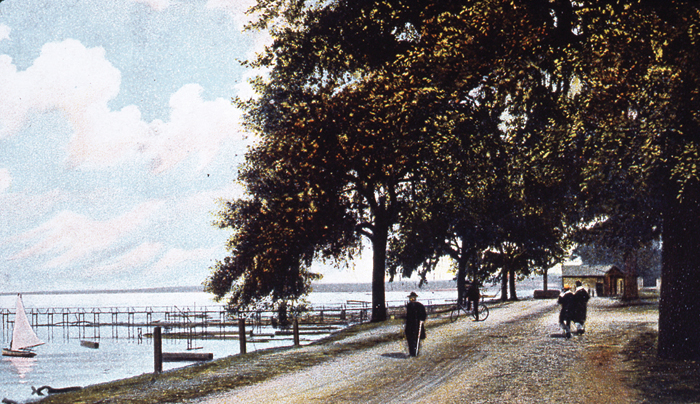 The Bay Shell Road in front of the Mobile Country Club. This charming thoroughfare was easily the favorite for both locals and tourists, who loved the sweeping waterfront vistas on one side and cozy tree-embowered cottages opposite.

The Neighborhoods’ Reputations and Revitalization

If the Bay Shell Road was well paved, the rest of the city’s thoroughfares presented a mixed picture. During the 1880s, along Royal Street a pedestrian would have encountered cobblestones, granite slabs (in front of the Battle House Hotel), granite macadam, wooden blocks, bricks and sand. Keeping such patchwork byways peaceful was up to the local police force, which included one captain, one detective, four sergeants, one clerk, one porter, two sentinels and 50 officers. Each officer carried a club, a chain twister, a revolver and a whistle, and they were kept busy. In 1882, there were 1, 148 arrests for everything from public drunkenness to murder to sodomy. Mobile being the rough seaport it was, women were often apprehended for prostitution. On one May afternoon, the Mayor’s Court heard a case involving several “‘scrumptious’ females with scrambled hair” who had been arrested for lewd behavior and foul language. One of the women, Kate New, “a gushing damsel, ” admitted that she swore “but didn’t use any such words as was attributed to her.” The court was unconvinced, and the women were fined and then released.

Refined women and their daughters were shielded from such scenes, of course. In decrying the number of dives and bars along lower Conti Street, one man declared, “No lady of my family would go unescorted by a man and no man of my acquaintance would take a lady if he could help it.”

Mobile has always been a very social town, and its fashionable women were in the custom of calling on one another for pleasant exchanges. By the late 19th century, local hostesses would receive callers for 10-minute visits at their homes. The day of a particular visit depended on where the hostess lived. Tuesday afternoon was reserved for Government Street, Wednesday for Conception Street and Thursday for Dauphin and Church streets. Everyone knew which street was for which day. “It was a nuisance, ” one hostess recalled candidly, “but we kept it up for years.”

Mobile changed radically during the next century. A few of its byways, like Front Street, disappeared altogether, while others, including Water Street, were radically reengineered, and too many, like the Bay Shell Road, lost their allure. But some managed to retain something of their tone, not least Dauphin, the scene of so much revitalization in recent years. It’s fun to think about while ambling along on a pretty day.

John S. Sledge is the author of “Southern Bound: A Gulf Coast Journalist on Books, Writers, and Literary Pilgrimages of the Heart.”