There are ghosts in jazz music. If you listen carefully, you can hear them, shaking off the cobwebs to tap their feet to an old tune. Sometimes you can feel them when a crescendo of brass sends a shiver up your spine that tickles the back of your neck. I heard and felt them myself this summer, might have even seen a few. It’s hard to tell sometimes.

I enter the large Hearin-Chandler Auditorium at the History Museum of Mobile mid-rehearsal. The musicians are organized into a semicircle of brass instruments, facing a drummer and bassist. On the far wall sits an army of keyboardists, five serious-faced musicians tapping out the melodies on the sheets in front of them. For a group of 20 kids with varying skill levels, this youth jazz band sounds spectacular.

“You should have heard them at the beginning of the week, ” one of the parents shouts in my ear above the music. “They didn’t sound this good.”

This is the Marcus Johnson Summer Youth Jazz Camp, a part of the Gulf Coast Ethnic & Heritage Jazz Festival held at the end of July. The camp has existed for over a decade, with a mission statement to “honor the jazz genre and promote the genre among future generations by providing Mobile area youth with valuable exposure to and appreciation for the art form.” In other words, they’re waking up the ghosts.

It’s not hard to pick out the band leader, Hosea London. He roams the room, pointing and directing his band while playing along on a trumpet. London, better known as the bandleader of Mobile’s legendary Excelsior Band, has a way with instructing kids. This year’s group comprises musicians from Mobile and Pensacola between the ages of 8 and 18. Although their skill levels range from beginners to experienced players, London has a way of making the learning experience relatable for each musician. During rehearsal, he tries explaining to a saxophonist what it means to play in a band. “In a band, you’re part of a team, like football. I know you play football. See? You’ve gotta operate like that.”

There’s an urgency to today’s rehearsal because it’s the last one of the week before tonight’s big show. The entire program, including this concert, the five days of rehearsals leading up to it and a day trip to New Orleans, only costs $25 per student, which is enough to make both parents and students jump for joy. Trumpeter Aaron Covine says his favorite part of the program was their visit to Louis Armstrong Park in New Orleans. Fourteen-year-old keyboardist Joe Fields has a different answer: “My favorite part is when Mr. London points at me for a solo.”

The sheet music was produced and arranged by band co-leader, Kent Murdick, a math professor at Faulkner State who has worked with the jazz camp for 10 years. “The art of jazz is getting lost, ” Murdick says between rehearsals. “That’s why it’s so important to get these kids while they’re young. Unfortunately, there’s really no other place for them to learn the genre.” If Murdick has his way, you might hear his students’ smooth jazz music on a downtown sidewalk. “I really want to take some of these kids to play outside of the Peanut Shop. That’s how jazz musicians learn, and that’s really how jazz got started.”

Sitting beneath a sprawling black-and-white portrait of the Excelsior  Band from the turn of the century, I finally get a chance to speak with London. The ghostly faces from the photograph seem to lean in on our conversation.

I ask London if jazz is a dying genre. “Yeah, ” he says, “especially for younger people. Because they don’t hear it! Whatever music you want to play, you need to listen to. So what I’m trying to get them to do is — if you play trumpet, you’ve gotta listen to some trumpet players. Otherwise you have no concept of what you’re supposed to sound like.”

I can barely hear London over the sounds of various instruments. Although this is meant to be a half hour lunch break, the kids shoveled down their food in about 10 minutes and hurried back to their chairs.

“I want them to be responsible citizens, ” London continues. “That’s the  whole purpose of the program. The young boys in this group — they could be doing a lot of things. But when they’re here rehearsing, I know what they’re doing. They’re over there working on those instruments. That’s a good thing.”

London says there’s a lot for kids to learn about life through music. “When you jump in on a solo, you gotta finish it. You can’t just stop whenever you feel like you want to stop. There’s a certain number of measures that you’ve gotta play. There’s a great life lesson there: When you start it, you’ve gotta finish it. You can’t jump back because it got difficult. You don’t have that option. You’re the one that jumped into it. I don’t care what you play! I really don’t! As long as you finish it up.”

As they continue the rehearsal, London points at a keyboardist in the back of the room, and I realize 14-year-old Joe Fields is getting his moment. As Fields taps out a solo, London breaks into a wide smile and shuffles his feet across the carpet. 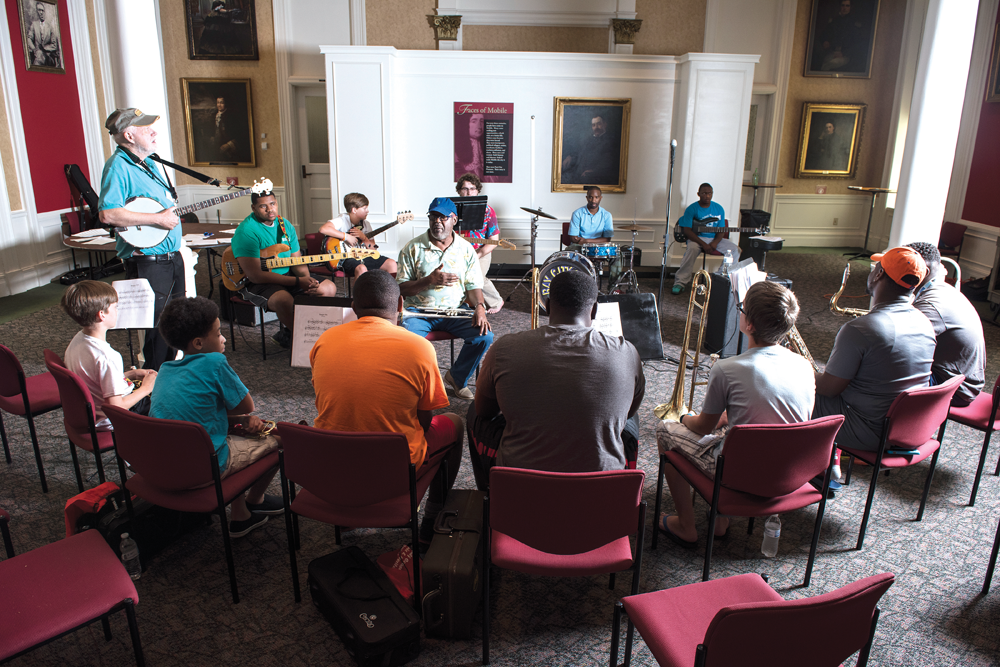 ABOVE London and co-instructor Kent Murdick lead the musicians of the jazz camp through rehearsal on the day of their big show. “Kids tell me they don’t have any money to go to college, ” London says of the musicians he teaches. “Well, the money’s right there in your hands!”