Hartsfield–Jackson Atlanta International Airport could be called the gateway between Mobile and the rest of the world. If Mobilians want to travel pretty much anywhere on Earth by air, they have to pass through it. That journey was made a good deal more palatable eight years ago with the opening of the fine dining establishment One Flew South. At the time, onlookers thought the owners were crazy to try upscale in an airport, a realm reserved for Chili’s, Popeyes and the occasional sports bar. It had never been done before. But skeptics were quickly proven wrong as the accolades mounted up and James Beard Award nominations came in for the small restaurant in terminal E of the world’s busiest airport. Hartsfield became a destination unto itself as people began to purposely book long layovers so they could grab a good meal, and executives chose it as a place to hold high-level, fly-in meetings.

Fast forward a few years, and the team and talent behind One Flew South were en route to New Orleans for a food festival when they made their own layover in Mobile. Chef Duane Nutter and beverage director Tiffanie Barriere were treated to a taste of restaurateur Reggie Washington’s hometown. Reggie’s family owns and operates a nursery in Theodore, but after graduating from McGill-Toolen, he pursued his career on the West Coast and later in Atlanta. Duane and Tiffanie marveled at the culture and feel of Mobile and wondered why the restaurant scene hadn’t exploded as it had in New Orleans, Charleston or Savannah. For several years the trio tossed around the idea of opening a place here with the goal of filling a gastronomic void and, in turn, making Mobile a foodie destination of its own.

That big idea is finally becoming a reality. The team has left Hartsfield behind to focus on Southern National, whose doors open early spring 2017 at 360 Dauphin St. in the heart of Downtown. The restaurant will be a modern American bistro with Southern direction and global inspirations. Reggie, Duane and Tiffanie were all born in the Deep South but have traveled, lived and worked all over the world, so Southern National is a natural melding of their life experiences. While the menu may include dishes we have all tried before (pimento cheese, short ribs and pork belly, as well as Gulf seafood), they plan to take the restaurant experience to a whole new level for Mobile. “You gotta get cocky with it, ” says Reggie. “We want to blow people away. Mobilians have refined palates; they travel and know good food. We’re going to give it to them right here at home.”

It’s not just the food that is going to be impressive. They plan to cook with a purpose and foster a “culture of people” centered on customer service, not just good eats. This philosophy is obvious at first interaction with Reggie; it seems he has already met half of Mobile since setting out plans for Southern National and counts them as friends, recounting their stories and connections with a jovial smile. The team is having fun, and they want their guests to feel that.

If Reggie is the organizer and planner of big dreams, Duane is the comedian with the creative touch. The accomplished chef is a bona fide standup comic. At the same time, he has been described as a “walking encyclopedia of food, ” and certainly knows how to elevate traditional Southern dishes by focusing on ingredients and, at times, unusual pairings. Who knew the humble kielbasa could sing with the right zing of kimchee and fresh mustard greens? Or that short ribs could be close to godliness when braised with fermented soybean teriyaki aged in Woodford Reserve barrels? He brings with him his relationships with craftsmen and small purveyors of fine ingredients, touches that make all the difference in the nuance of a dish. The team looks forward to forging new relationships, as well, with those along Mobile Bay who produce fine ingredients that can be incorporated into the Southern National menu. To that end, Reggie, who has been called “Reg the Veg” in the past for his love of seasonal produce, has turned a small patch of land at his family nursery into the kitchen garden, which will provide Chef Duane with wintertime greens, spring strawberries, herbs and more year round.

Rounding out the trio, Tiffanie brings the epitome of service to the bar, which is as large as the restaurant. Both spaces were designed by Atlanta-based Smith Hanes Studio with a “hometown homegrown feel, but nice enough to be considered your downtown clubhouse.” The team hopes the bar will become a gathering spot for customers to share in a truly distinctive environment. In addition to traditional cocktails, vintage crystal punch bowls will serve a variety of fruity, complex punches, created tableside, that foster conversation and conviviality. (The honeysuckle vodka punch with pear and star anise is a must!)

“Just wait, ” says Chef Duane. “Big things are happening in Mobile, and we’re going to be part of it.” A food and wine festival is in the plans, as well as tasting dinners with renowned chefs and events with winemakers. No more traveling out of town for an Instagram-worthy dining experience. You can plan your layover a little closer to home.

This warm and fruity punch is perfect for a festive crowd.

1. In a martini shaker, combine all ingredients. Shake well and serve over ice. Makes 1 cocktail.

1. In a medium-sized saucepan, combine sugar, water, spices and pear. Bring mixture to a boil; simmer until pears are tender, stirring occasionally.
2. Remove from heat. Let steep for 20 – 25 minutes. Allow to cool.
3. Remove large spices from saucepan and discard. Pour syrup pear mixture in a blender and blend until smooth. Store in an airtight container in the refrigerator for up
to 1 month. Makes 2 cups. 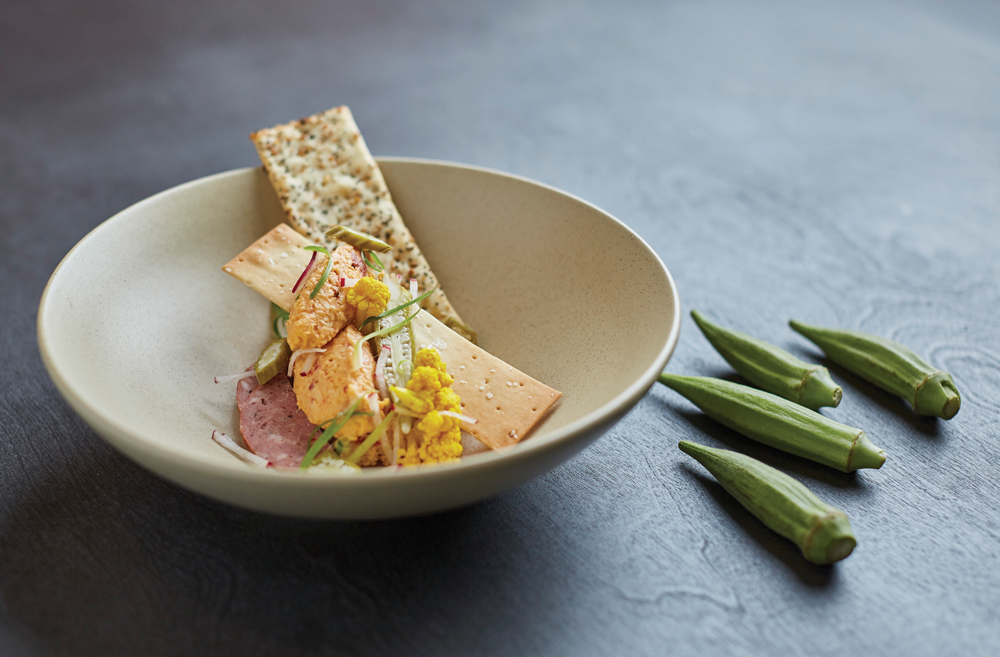 Pimento cheese is a staple in any Southern kitchen. Some are savory, some sweet, and it can be eaten on just about anything you want. At Southern National, the chefs will serve it on a platter with turmeric pickled cauliflower and okra, shaved radish, sliced summer sausage, lavash, flatbread and breadsticks.

1. In the bowl of a food processor, add grated cheese, garlic powder, onion powder, cayenne powder, Worcestershire sauce, mayonnaise and red bell
pepper. On pulse control, mix until well combined.
2. Serve chilled with Turmeric Pickled Cauliflower and Okra, summer sausage, and flatbread or crackers for dipping. Leftovers may be refrigerated in covered container for up to one week. Serves 4 – 6.

These delightfully sharp veggies serve well alone or with crackers and Classic Pimento Cheese. These can also be prepared using traditional canning and pickling methods.

1. Wash cauliflower, drain well and cut into florets.  Place in large glass mixing bowl with washed okra. Set aside.
2. In large saucepot, combine the water, rice wine vinegar, sugar, salt, turmeric and pickling spice. Bring to a rapid boil.
3. Once brine is boiling, pour over cauliflower florets and cover with plate to keep florets submerged in the liquid. Allow liquid to cool.
4. Cover with plastic wrap and place in the refrigerator for up to two weeks. Serves 4 – 6. 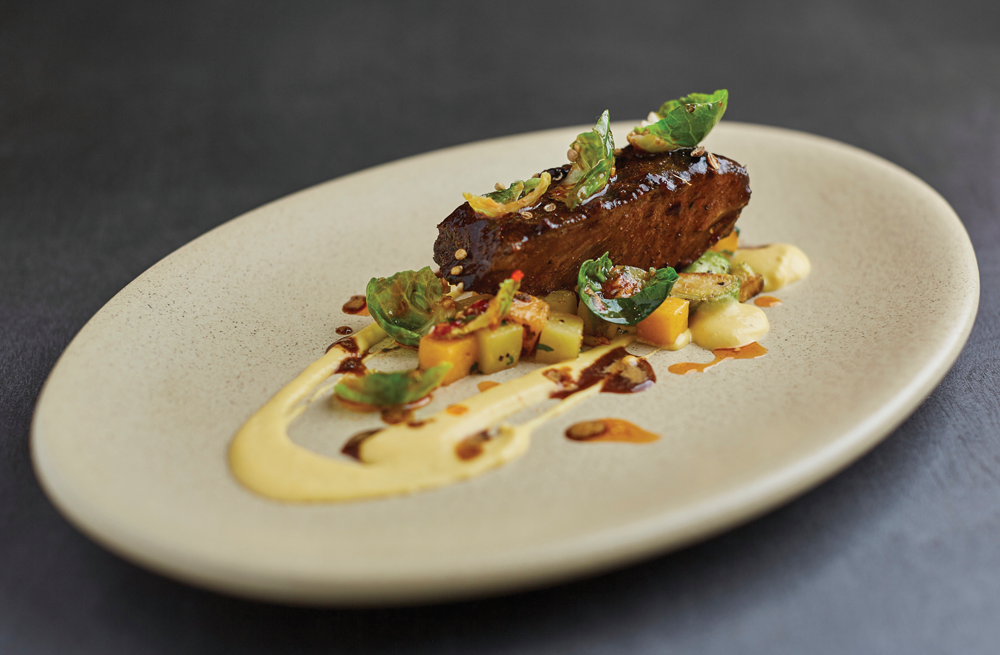 These melt-in-your-mouth ribs are worth every bit of the effort. To plate it Southern National style, layer ribs over Miso Butternut Squash Puree (see below) and top with Brussels sprout leaves tossed in kimchee and the reduction sauce.

1. Trim off any excess fat from the short ribs.

2. In a large bowl, combine Five Spice powder, garlic powder, black pepper, fennel seed, coriander and pepper flakes to make a dry rub. Coat each of the ribs with oil, then rub each of the ribs on each side with the dry rub. Place in a pan, cover with plastic wrap and put in the refrigerator overnight.
3. When ready to cook the ribs, preheat the oven to 350 degrees.
4. Pat the ribs dry but make sure not to rub off the spices. In a large rondo over medium heat, add 3 tablespoons of oil. Place meat in pan and brown on both sides, about 3 minutes on each side.
5. Place ribs on sheet pan and set aside, discarding most of the remaining fat in the rondo pan.
6. Add 2 tablespoons of oil and return the rondo pan back to medium heat. Add onions, fennel, ginger and carrots. Then lightly season with salt and black pepper, stirring occasionally until
onions are lightly brown and soft.
7. Add the red wine and reduce by half, then add the brown sugar, orange juice, Kentuckyaki sauce, veal stock and chicken stock.
8. Bring to a boil and place the short ribs back in the rondo, cover with foil and place in the oven.
9. Cook until meat is fork tender, about 4 hours. Remove meat and simmer remaining liquid over medium heat until reduced by half, about 20 minutes.
10. Toss blanched Brussels sprout leaves in Kimchee Base. Plate ribs over Miso Butternut Squash Puree. Top with Brussels sprouts, and drizzle reduced braising liquid over top. Serves approximately 8 – 10.

1. In a large pot, add squash, onion, bay leaves, ginger and cream. Let simmer until squash is tender. Remove bay leaves.
2. Place the cooked squash, ginger, onion and sesame oil in the blender and add just enough additional cream to make the blender blades spin.
3. While the mixture is pureeing, add the miso paste. Season with salt and pepper as needed. Makes 2 cups.