William G. Caffey, a Mobilian stationed in Hawaii with the Army, wrote the following letter home a little more than a month after the attack on Pearl Harbor. Caffey would later return to Mobile in 1947 to work as a lawyer, circuit judge, assistant U.S. attorney and eventually an Alabama state senator. Caffey passed away in 2000 at the age of 81.

(Scroll down to see original letter)

Just a few words to let you know that I am still OK, and that finally we are getting a little mail now. A boat came in yesterday with a load of mail, and they have been unloading all night and all day today. They still have a long way to go, but at least we have gotten two deliveries today and more promised for tomorrow and the next day….

I received Dad's letter with the clippings of the UMS-Murphy game and the inclosure (sic) of Cousin Nancy's letter. While I think she stretch the point a little bit, I enjoyed reading it and was very glad that you sent it along…… The contribution of the clipping in regard to the cow was also greatly enjoyed and has caused quite a bit of comment among the boys…. What they don't put in the papers now-a-days! I also received a card and note from Mary Helen and Emmett, one letter from each of the Plancks, a nice Xmas card from Miss Agnes Belle, and also one from the Armbrechts. All were appreciated and in due time will receive an answer; but in the meantime, you might mention that I have received them, as it has been some time, and I imagine they have decided that I am a pretty unappreciative person……

I am very anxious to hear how the hunt came out, and may get a letter within the next day or so telling me all about it…… I also hope that the packages are here on the “rock, ” and I will get them eventually…. I can hardly wait to set tooth in that fruit cake!

I have never given you very much of an account of the attack which we had here on the 7th for several reasons — mainly because the censorship was very strict at first, and also because I was afraid that if I tried to get it all down right away, I might be tempted to stretch the point a little bit…. But now we can tell of anything that we actually saw, and as I was right here at the time, I got to see a good bit…. So here goes….. I was lying in bed on the said morning of December 7, 1941, reading the paper — having been up for about an hour — when I was shocked out of the funnies by a terrific explosion. The first impression that I had was that the Navy was merely having another practice, or were dynamiting at Pearl Harbor… But soon, in fact, it was only seconds later, another and another explosion shook the house. Then I knew that it was the real thing, and nobody was just playing around….. The walls of the house cracked under the concussion, and dust flew up from everywhere… You know about the general situation in respect to where I am located — right between Pearl Harbor and Hickham Field, and incidentally my quarters are one of the nearest to P.H. There were two Captains in the house with me at the time, and we all started dressing as quickly as possible. By this time the bombs were crashing on both sides of us, and the smoke and dust from P.H. and Hickham nearly cut off the light of the sun. The machine guns and AA guns were not long in getting into action and the noise was terrific. The navy AA guns were the first to get into action, as the sailors were right on board, and some of our guns got into action shortly. Both the planes and ground machine guns were going full blast, and with the roar of the plane motors and the explosion of the bombs you can imagine how much noise there was….. As I looked out of the window while dressing, I saw one plane dive low over the house, and could clearly see the big red rising sun on the plane’s fusilage (sic)…

As soon as we got dressed, we started for the batteries, knowing that there were no officers with the men… But as we got into the back yard, a plane started strafing the beach right in back of our house, and consequently we all three dove for a nearby tree. There we stayed while planes kept swooping over, and when a lull finally came, I made a dash for the battery. I was afraid that the men, not having any officer present might get panicky and get hurt, so I made it in nothing flat up the back road, taking advantage of trees all the way. It is only about three of (sic) four blocks from the quarters to the battery, but it seemed that it was three or four miles…. However, when I arrived, I found that everything was in much better condition than I had imagined…. The first sergeant is an old army man, having served in Panama and other places, and he was as calm as a cucumber…. He had everything under control and the men, considering the shock of the sudden attack were very calm…. I immediately took over command, the captain being in Honolulu, and started the men to loading clips for the automatic rifles that we had. We got the rifles out and spread the men out so that there would be less chance of getting them all at once…. However, we were very lucky, because although several bullets came throught (sic) the roof of the barracks, and a shell hit right next door, no one in the battery was hurt. We got some shell fragments throught (sic) the side of the barracks, and the yard was torn up with them, but none found any of the men……

By the time that we got some of the clips loaded, the “yellow bellies” were back again, and quite a few of the boys got to take a shot at them. Although I don't know that any were hit by our fire, perhaps we did annoy them a little bit anyway.

After the raid was over — it lasted about two hours — I was sent to another fort to get a supply of water, as our water main was cut off with the bombing, and on the way out I had to go right through the middle of Hickham Field. Everything was blazing as I went through, and the first impression that I got was that nearly everything was gone; but later I discovered that there was not nearly as much damage as I had thought. After getting the water, I returned here and found the captain and Lt. Bryant, the other officer on duty with the battery, here. They had both been in Honolulu, and couldn't get in till after the attack…… I saw one of the Jap planes that was shot down just a little way from here, and went down to look it over. It was a very interesting scene.. but I'm sure you wouldn't like to hear about it…

Since then everything has been pretty quiet, although as you can well imagine there were some pretty sleepless nights spent right after the attack…. We have been very busy since then and every night brings on a blackout. I have gotten used to it now and seriously doubt if I will ever get used to seeing a light at night anymore. And as for cars with headlights on — well, that just seems like an impossibility. I honestly believe you will have to turn out the lights when I get home to make me feel easy…. But at least that ought to cut down on the electric bill.

I have received what might be called an advancement, if you looked on from a purely abstract point of view; but it certainly carries an increase in work along with it. I have been relieved from my battery duties, nominally, and assigned to the Regimental Staff entirely. In addition to my other duties, I have been made Motor Transportation Officer for the regiment, and given command of all the motor vehicles in the Regiment. They were scattered from hell to breakfast, or more correctly from Puu O’Hulu to Kaneohe… In other words they were all over the island, and no one had any idea where. Consequently I had to find them and get all the records straight…. It is nearly all completed now and everything is under control but it was quite a job, and still is…. However, I am now my own boss to a large extent but the only drawback is that I never seem to have time to give myself a vacation… Only this afternoon, I decided to take off and see a movie, which incidentally is running again after several weeks lay off. And right at the climax, when the hero was just getting ready to marry the shero, the major called up the office and wanted a report, which I had to make out for him. Oh, well, guess I should have been at the office anyway!

That is about all the news we can stand at one time I feel sure. No doubt you were wondering if it is ever going to end; I am about run down; and the poor typewriter is burned up… So until again, so long, and 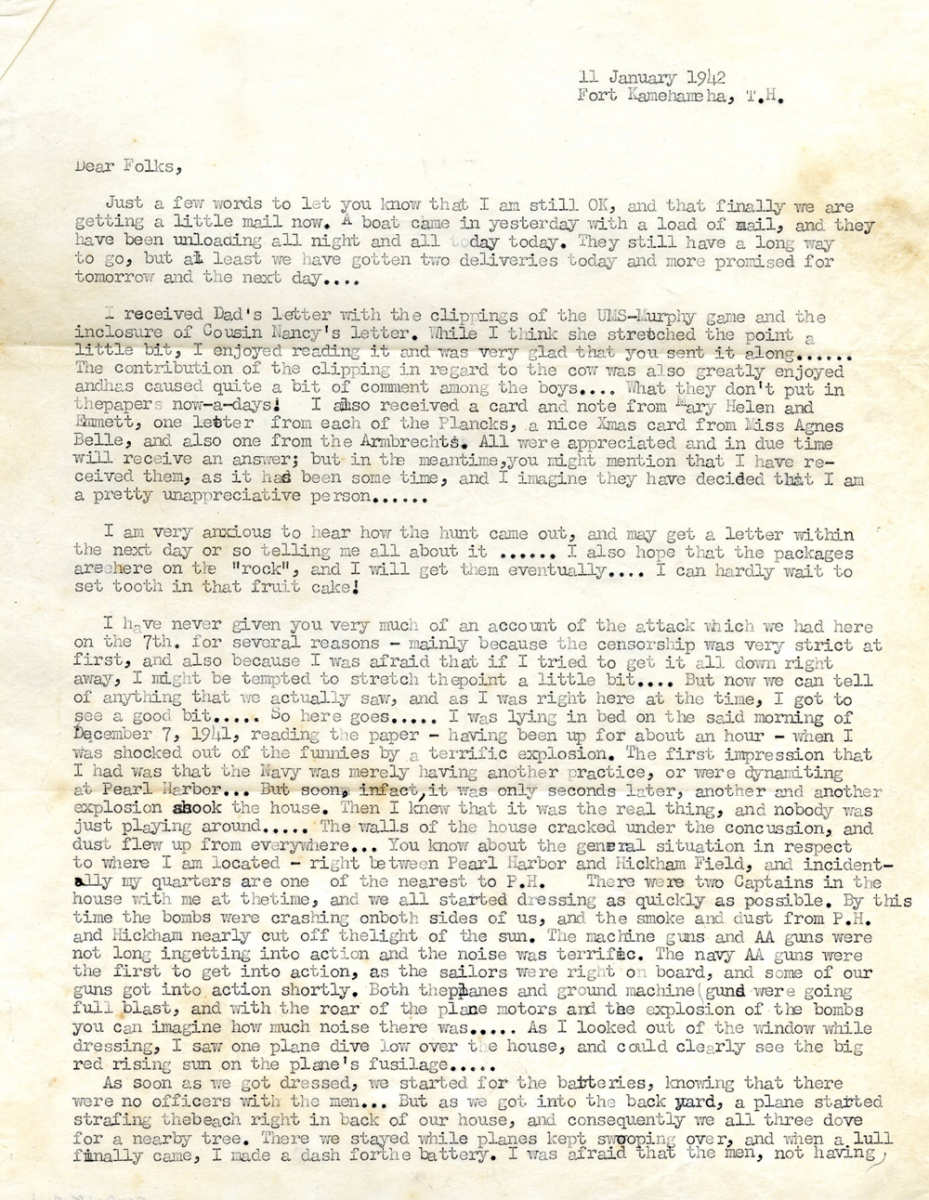 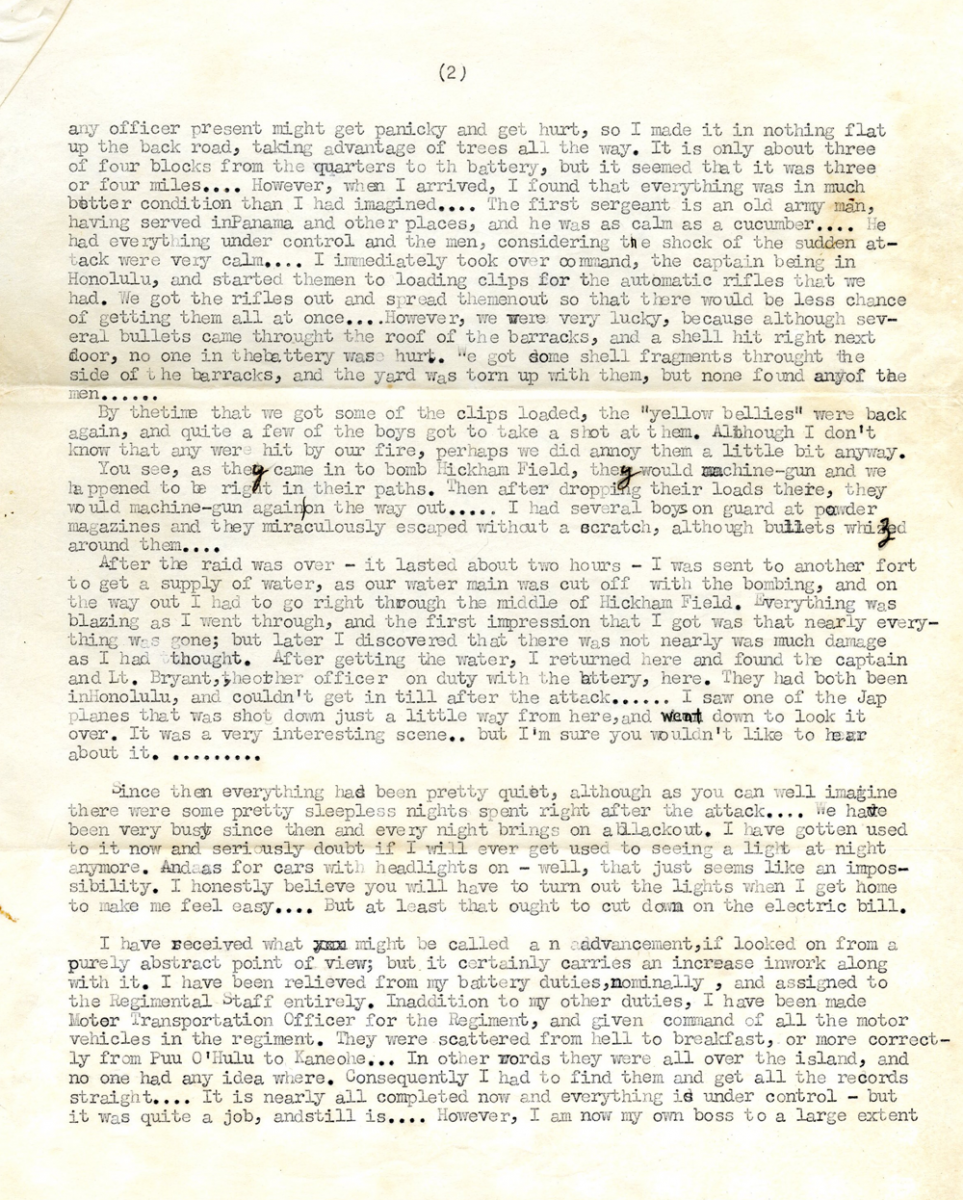 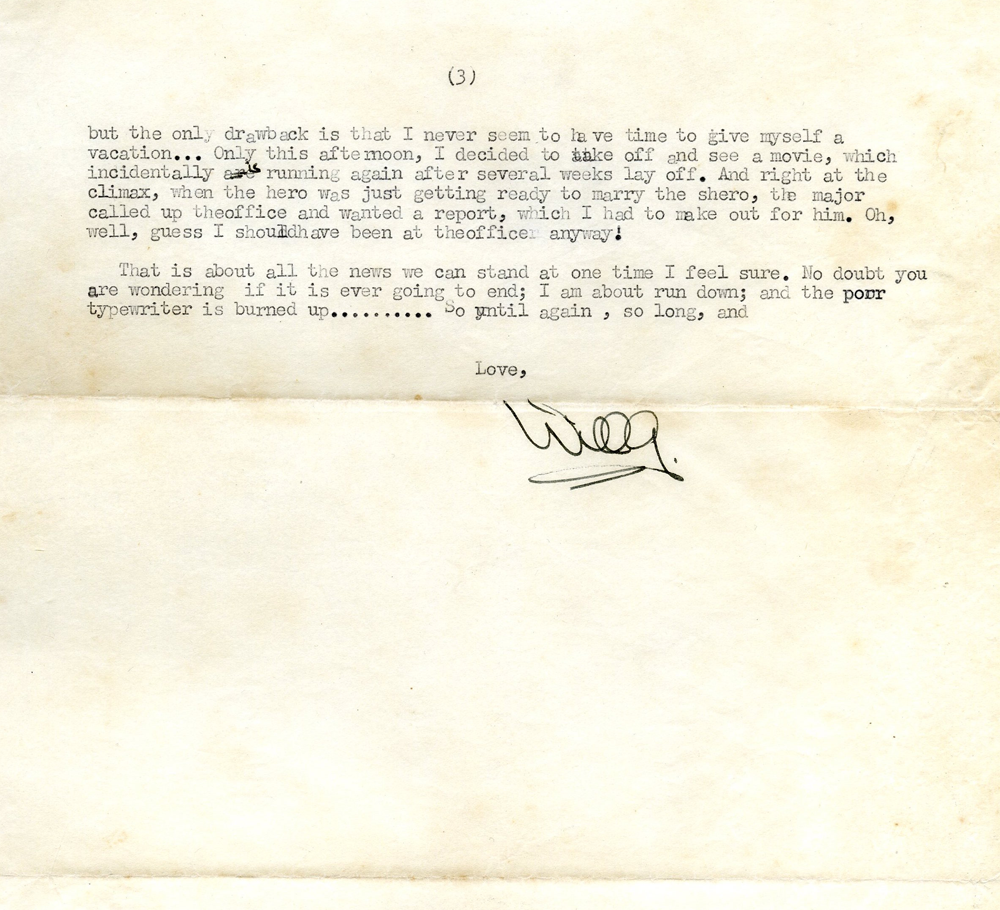