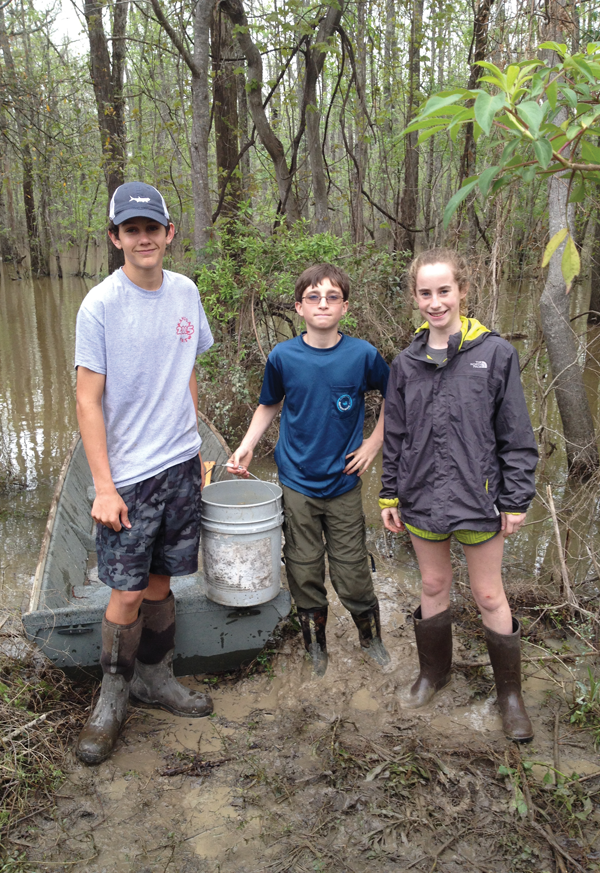 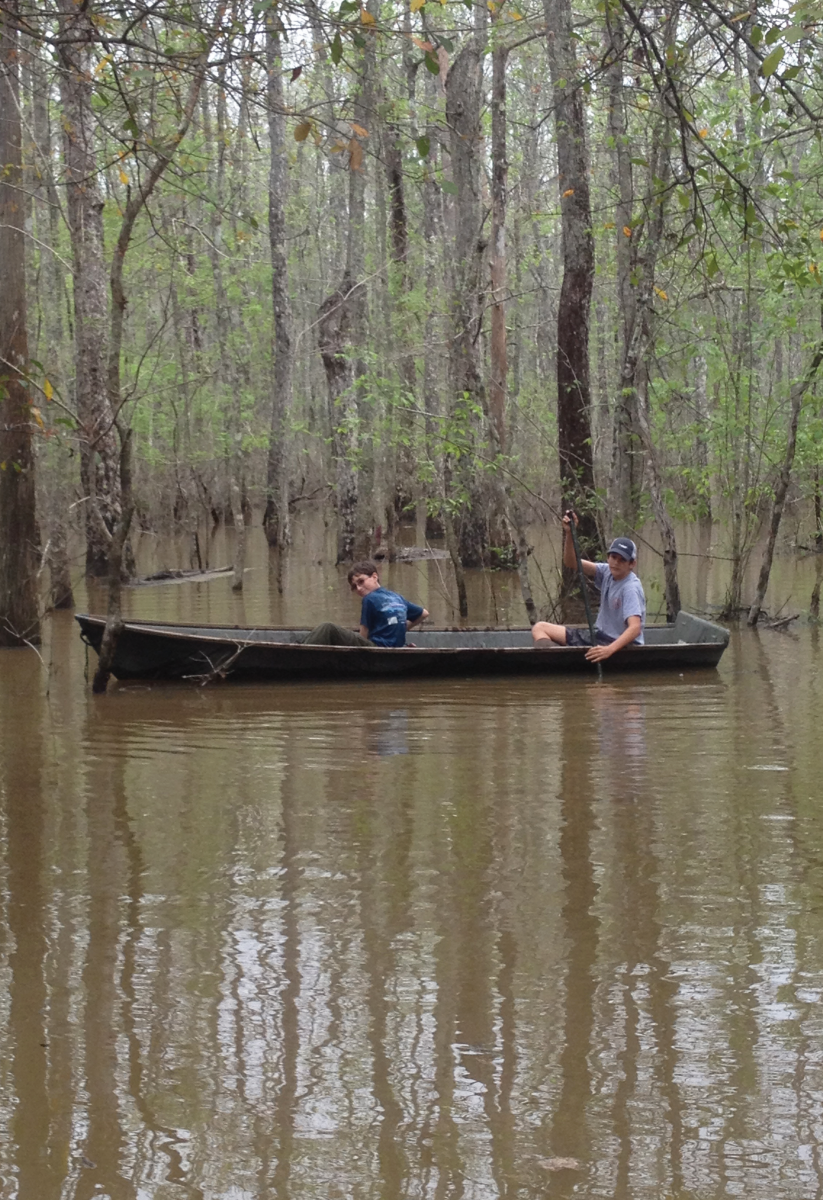 If you’re headed west on I-10 between February and June, just after crossing into Louisiana, you’re likely to see a line of cars and trucks parked alongside the interstate. There’s no one around the vehicles and seemingly no place for the people to have disappeared to. You’re on a straight section of highway between two bridges with no exit between. And the swampy thicket of the Pearl River basin rises like an impenetrable jungle wall just off the road.

A couple of years ago I was riding with my family back from New Orleans and decided to get to the bottom of this mystery. I slowed our minivan and parked behind an old S-10 pickup, one of the many beat-up looking vehicles abandoned on the roadside. After a quick scan of the tree line I noticed that every 50 feet or so was a muddy footpath leading into the thicket.

“Anybody want to come with me?” I asked the kids. Of course, they all did. My wife, not so sure, said she’d watch the car.

The kids and I ducked into the tunnel-like trail and found that, just beyond the trees, the dense foliage opens into a vast flooded cypress swamp. Not far down the trail, at the water’s edge, were a man and his son taking what looked like tiny crab traps from a pirogue. As we approached I saw him dumping crayfish from the traps into a cooler. He said he had almost two sacks of mudbugs, which looked to me like about 50 pounds.

I asked what he used for bait and how long it took him to catch that many. He said he’d been out there a few hours and was using what he called “melt” for bait. Melt, I learned, was cow spleen.

The mosquitoes were starting to get us, so we didn’t stay long. But the thought of catching those crayfish was already in my head as a new adventure.

Early this spring I got on the internet and found Gus’ Tackle, a small business in Slidell that advertised crayfish traps and nets. I borrowed a pirogue from a friend, loaded up the kids and set out one overcast Saturday morning.

We passed in and out of rain as we crossed Mississippi, and I hoped we’d get a small window of decent weather. But as soon as we reached Pearl River, and I realized how few vehicles were on the roadside, I wondered if the weather wasn’t the least of my concerns. I considered how little I really knew about crawfishing. I didn’t even know if it was crayfish season or if there was even such a thing. And now I had three excited kids on a rainy day, two hours from home, with Daddy’s big adventure built to extremes in their heads.

“How many you think we’ll get, Dad?” my daughter, Mary Michael, asked.

In Slidell I located Gus’ just off the interstate. He had the wire traps like I’d seen but told me I needed a special license to set them. Gus recommended “deep water nets” that looked a lot like the crab baskets we hung from the dock on Mobile Bay, except these were heavier and had smaller mesh. He said most people used the nets.

I purchased three of the deep water nets from Gus at $8 apiece. He assured me that it was high season for crayfish, but most people were probably staying inside due to the weather. Then he directed us up the road to the “bait shop” for the melt. It was a small, one-room structure with a sign that read “The Bait Shop.” And the owner seemed to know exactly what we were after. He asked me how many nets I had. I told him. He reached into a cooler and pulled out a plastic bag containing a frozen mass of cow spleens the size and shape of a soccer ball. $5. He told me to cut off chunks of it the size of my fist and fasten it to the middle of the nets.

Fully equipped, we headed east again, back toward the Pearl River. When I began to see a few vehicles parked off the interstate I slowed next to a bridge where the roadside was wide enough to get well away from the speeding traffic. It’s a little unsettling unloading kids and gear while 18-wheelers are roaring by. We drug the pirogue down one of the muddy trails until we reached the water’s edge. Before us was a quiet cypress swamp, flooded far into the trees. The water was as dark and muddy as chocolate milk.

“Let’s see if this works, ” I told them. I cut off chunks of melt, tied them into the center of the nets, and sent my son, Albert, and his friend, John Michael, to drop them to the bottom and tie them to overhanging tree limbs. Mary Michael and I watched from the bank. I’d brought along some venison sausage just in case we hadn’t been able to locate melt. I tore off a chunk and tossed it at the water’s edge to see if it attracted anything. Within seconds a large mudbug crawled up from the murky depths and began picking at it.

The boys returned, and I pointed out our happy crayfish for encouragement. We waited on the bank about 10 minutes before I sent them out again. Each of the nets had nearly a dozen. Apparently they were swarming the bottom like ants. The kids dumped them into a 5-gallon bucket with much excitement. Then they eagerly reset the nets for another load.

Over the course of two hours we collected nearly five pounds of mudbugs. We took them home, boiled them, and ate them that night. Rarely have I set out on a venture with such success. Roadside crawfishing was a hit.

I stopped at our spot one more time shortly after, not to fish, but to gather more information from the locals. Ronnie, who is about my age, told me they had only been there a couple of hours and caught nearly a full sack. I asked him how many pounds were in a sack. He picked up the mesh bag and struggled with the conversion. Apparently the locals only think of crayfish quantities in terms of these sacks. I suppose the translation to pounds happens at the counter of the seafood market. Finally he said, “About 20.”

I told Ronnie about our experience and probed him for advice on how we could improve. He said we needed more nets. At least a dozen. His son stays out on the water, cycling back to his first net as soon as the last one is emptied. Ronnie also suggested moving the nets a few feet each time they are reset. And they don’t tie theirs to tree limbs, but have what looks like a crab trap cork attached. Finally, I noticed the hooks he used to clip his bait to the net. They look like the hooks on a shower curtain, and I recalled how the crayfish had occasionally pulled our bait free and made off with it.

The next time I’m in Slidell, I’m buying the bait clips, corks, and nine more nets from Gus. We’ll have all we need for a two-sack crayfish boil.