It’s nearly midnight at the Battle House Hotel. The toasts have been made, the cake has been cut and everyone has danced the night away. The bride and groom say their goodbyes, hugging the last of their guests as they trickle out into the darkness. Exhausted but filled with the joy that nuptials bring, friends and families of the newlyweds retire to bed. Meanwhile, Debbie Richards and her own husband of 46 years, David, stand outside the door, waiting patiently. It is in now-quiet, echoing banquet halls and at empty tables that Debbie finds her treasure: the wedding flowers.

Debbie and David load the flowers into their car and drive them to their home in Spring Hill, where, come daylight, she will use them to create arrangements for people in assisted living facilities and nursing homes across the Bay area. She calls her enterprise “Happy Flowers,” and it has brightened the day of those who need it most.

Richards, a Mobile native, never planned to be a florist. However, when her five children started to get married, she realized that she could save money by doing their floral arrangements herself. She uncovered a hidden talent, and friends started asking her to create arrangements for the weddings of their loved ones as well. When Richards attended weddings, she noticed colorful bouquets lying on the floor at the end of the night and ornate displays of fresh flowers tossed in dumpsters. “There is nothing wrong with that. The flowers served their purpose,” she says, “but I thought, ‘what if they could serve another purpose?’” 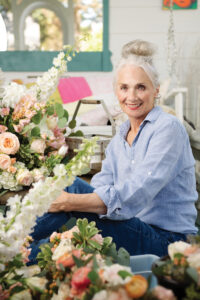 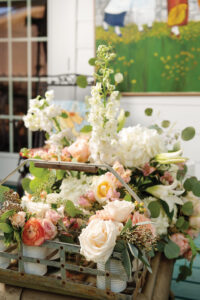 It was also one of her personal traditions that inspired her charitable giving. Richards often brought flowers to her mother, who resided in an assisted living facility. Richards noticed other residents eyeing the flowers and complimenting how lovely they were. It was clear that they wished they had some as well. The idea for Happy Flowers blossomed from there.

Richards’ daughter designed business cards for Happy Flowers, and Richards began leaving them at venues such as the Battle House and Spring Hill College. She also contacted wedding planners and informed them of her services. Brides began generously donating their flowers so often that Richards’ friends joined in to help, picking up flowers and taking them to people they know who are recovering from surgeries or who have recently lost a loved one. “I ask people, ‘who do you know who’s sick?’ They usually know someone who had a hip replacement or recently lost her husband,” she explains.

The process is simple. Richards drops off her arrangements — elegant blossoms in white vases — at places such as Murray House, Allen Memorial Home and Ashbury Manor. The staff then distributes the arrangements to those who are hurting, feeling lonely or just could use something cheerful. Richards never meets these individuals personally, but she finds fulfillment in knowing that the flowers went to those who needed a reminder that someone is thinking of them.

Today, Richards no longer provides floral arrangements for weddings. The pressure of meeting brides’ expectations and the amount of work required lost its appeal. However, with Happy Flowers, she still gets to use her talent, but on her own terms and with her own creative vision. For the bride and groom, a wedding is one of the happiest days of their lives. Happy Flowers spreads the seeds of that joy throughout the community.