Peace on Earth on Springhill Avenue

Turn off on Lanier Avenue. With historic homes, Bellingrath Gardens-grade lawns and sidewalks running under mossy oak arbors, one often asks, “Was I just on Springhill Avenue?” Indeed you were, but that was 30 seconds ago.

Tom Rue describes his historic district of late Victorian and craftsman-style homes: “Ashland Place is the quintessential Southern neighborhood.” Quintessential is exemplified in the main entrance, a stucco and cement archway to tranquility. Aged oak trees offer outstretched branches, meeting in the center of the road, like botanical arms slapping high fives above residents taking evening walks for relaxation as much as for exercise. And although the street names might differ (Lanier, Levert, Ryan and De Leon), the spirit of Ashland Place lingers above all, not unlike those mossy oaks.

An Altered Course Every Afternoon

Recognition of the unique street that’s hard to beat goes to Williams Court, the road of changing directions.

“The Court is a one-way road, from 2 – 7 p.m., ” Collins McAleer says. Its part-time one-way status (and a 45-degree turn that gives power steering a reason to be) truly sets it apart in Midtown. “I call it the secret street, ” McAleer adds.

History in the Making

Palmer Hamilton lives on Palmetto Street in the heart of Oakleigh’s Garden District. He notes, “Oakleigh residents all know each other, not just on their street, but around the corner and a mile away.”

History blends with beauty. No community is more passionately united in the preservation of Mobile’s urban historic district. Discussing heritage over a frothy brew at the neighborhood’s Callaghan’s Irish Social Club isn’t a bad way to spend your time, either. Oh, and a Saturday morning bike ride down to Cream and Sugar for a good cup of java is absolutely essential. 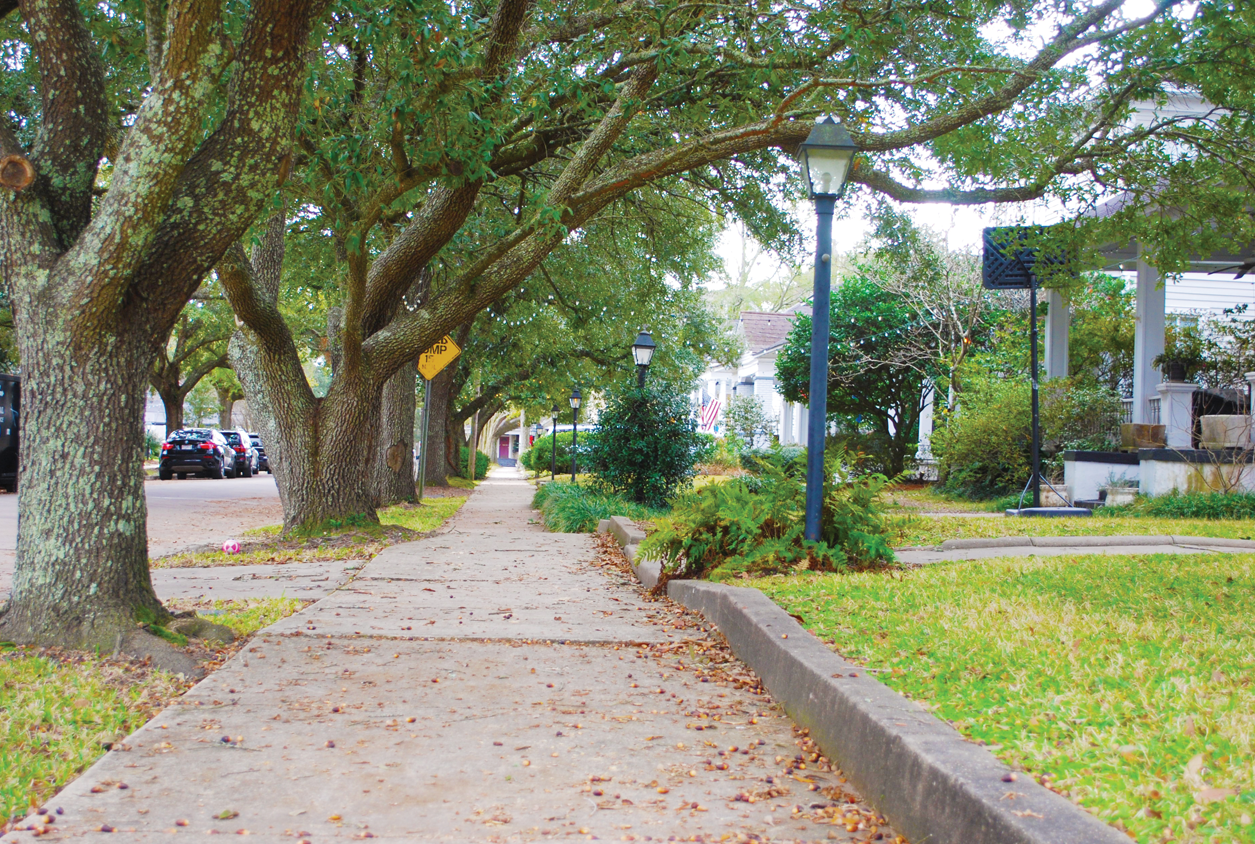 Nestled between Dauphin Street and Old Shell Road, North Reed wins “Front Porch Friendliest.” Century-old homes look as fresh as a Mobile morning. From their front porches, residents smile and wave, not just at each other, but even when an undocumented writer walks by.

“Reed is like a Norman Rockwell painting, ” resident Colleen Comer explains. “There is no greater connection to neighbors than on this street. All of our kids play together on these sidewalks. We all mingle.”

And mingling is a good thing. Occasionally, the avenue is blocked to vehicular traffic. Refreshments are served from previously referenced front porches. People visit, good times erupt and Reed rocks to live music. Long may it mingle.

Walking in a Water Wonderland

Majestic homes dotting the picturesque Dog River give Venetia Road the “Best Water Feature” nod. It is more than a street though: It’s a riverfront community.

“The nice thing about it is its seclusion, ” homeowner Mac McNeil shares. “Our street is a neighborhood. We are a close-knit group, but plenty of room separates our homes.”

Given the distance, a little bit of  community ingenuity is required to navigate the long drive. Venetia Road children do Halloween’s house-to-house trick-or-treating on golf carts (with adult supervision). “It’s more efficient than walking, ” notes Mac.

Speaking of transportation, by the time Venetia Road teens learn to drive cars, many have already mastered boats.

Cool by the Pool

Charingwood Drive is a main road of Inverness. It loops through rolling hills around 144 houses in a picturesque West Mobile subdivision. Residents dive in — literally.

“On select Fridays, usually in the summer, neighbors host lemonade and cookies for each other, ” says the community’s Homeowners Association President Gayle Agee. “But we have something going on all year.” Within minutes of restaurants, parks and the airport, one may commute anywhere from here. But why? Inverness may be just off Hillcrest Road, but residents don’t worry about car lines. They’re at the poolside, working on tan lines. Inverness is a good place to be. 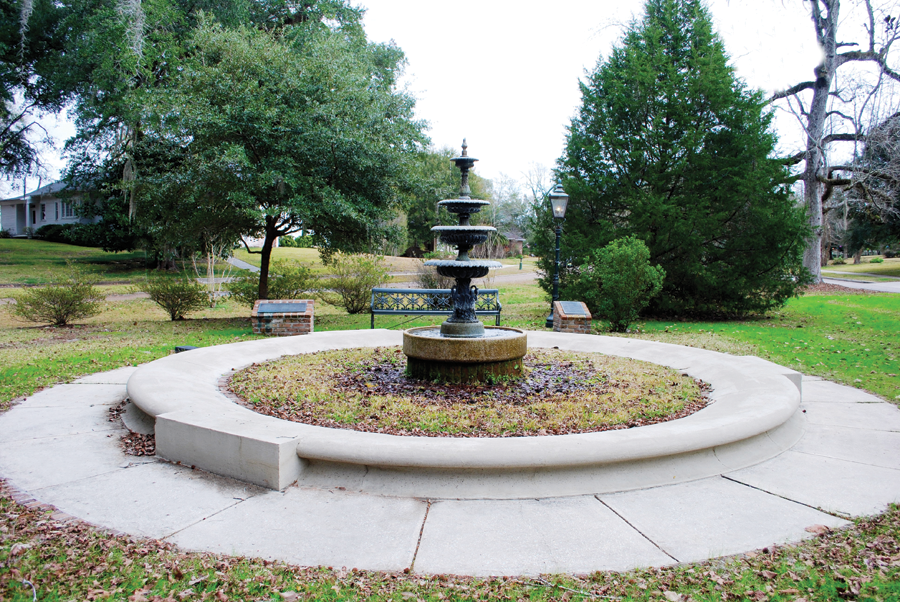 Oh, Fearnway Street, where have you been all my life? Alas, another hidden jewel that shouldn’t be concealed.

“Many of us meet at the fountain, ” notes John Kilpatrick about the green space, where leashed dogs take their people for chats. “Actually, we meet everywhere.” His wife, Laurie Kilpatrick, agrees, adding that Fearnway is convenient to everything. “We can walk to schools, churches and, for many of
us, even work.”

The Fearnway neighborhood borders bustling Catherine Street, but you would never know it. It is an oasis of fern-draped houses, manicured lawns and a culvert splitting the street in half. But the culvert — and this is so Fearnway — has little concrete footpath bridges crossing over, giving an almost enchanting look, cute enough to house hobbits.

The “Best for Pets and People” designation goes to North Monterey Street. The wide spacious roads winding down a scenic avenue make it hard to decide who benefits from Monterey Street the most — the people or the furry residents? Let us paws and reflect.

Monterey Street is where everyone walks with each other, with babies, with dogs. “Everyone enjoys it, ” says resident Paul Crane, former University of Alabama and New York Jets football player and current Monterey dog walker. “Monterey is just a good place of good people.” His dog agrees by wagging its tail.

Walkers are encouraged not to hurry — mainly by other walkers, who want to stop and chat.

The Little Lane that Could

Tuthill Lane connects two bustling thoroughfares: Springhill Avenue and Old Shell Road. But it does more than connect; it calms. Beautiful homes line the lane, ranging from comfortably stately to la-di-da. But Tuthill is a gateway to virtually everything Mobile has to offer in the land of Spring Hill.

On the Old Shell Road side, “Tuthillians” savor sipping java from local coffee shops, jogging across a college campus and shopping at cool boutiques.

All for One and One for All

What’s in a name? Plenty. “First thing you need to know, it’s pronounced ‘De-moo-ee, ’ not De-Moy, ” Trixie Daniel corrects me so that I am not a De-moo-ee newbee.

Trixie and husband, Alan, have lived all over the world, but when they came to Mobile, they were attracted to this street for the same reason everyone else is. “It is a classic Americana neighborhood, ” she says.

Neighboring Demouy–ites Leslie and Jon Largue agree. “We love this street and don’t want to live anywhere else, ” says Leslie. “There is just overall acceptability.” Demouy readily accepted me, and I couldn’t even pronounce it.

What's your favorite Mobile street or neighborhood? Share it below.