Mobile and architecture go way back — like, more than 300 years back. Today, we can still see this history displayed throughout the city, ranging from 1830’s Creole cottages to 1960’s midcentury beach houses, with plenty of noteworthy buildings in between. Each architectural style from each subsequent era brings a unique characteristic to Mobile’s rich culture, such as Greek Revival’s white columns and Queen Anne’s towers and wraparound porches. “Mobile’s architecture is like her people,” says architectural historian Cart Blackwell, “that artful balance of innovation and tradition.” Although the passing years bring with them constant deterioration, the city’s architecture is well-preserved and often maintains the classical identity of each structure. From small-scale residences to large-scale commercial buildings, Mobile Bay is rife with stunning designs, old and new.

FOR SALE
This circa-1852 two-story brick townhouse sits behind the Cathedral-Basilica of the Immaculate Conception and had long been an eyesore. Jacques Chigahizola built it around 1852. As one of the more romantic unrestored residences left in the city, it features a wrought-iron cantilevered balcony, sans wooden decking, and a magnificent battered architrave surrounding its side entrance. Fortunately, it is now for sale, along with much of the rest of the block, which historically served as Hoffman Furniture. The other available properties include 407, 413, and 415 Dauphin, along with 406 Conti on the block’s south side. These buildings are a package deal and represent one of Downtown’s most intact historic ensembles. The asking price is $2.2 million. 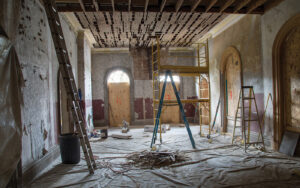 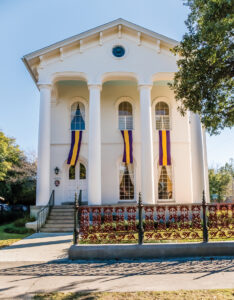 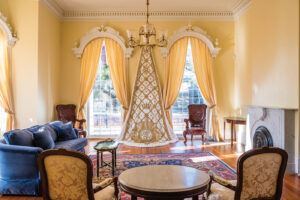 PRESERVED
In 1857, Jonathan Emanuel erected this columned gem as a wedding present for his daughter, Mary, and Joshua Kennedy Jr. In its design, the Kennedy House represents a strong blending of Italianate elements with Classical precedent. The two-story stuccoed brick house, with its monumental Tuscan columns and flattened arches, is imposing. Furthermore, its bracketed eaves, rounded windows and doors, and highly decorative interior flourishes, such as elaborately molded, hooded windows, complete with broken pediments, drop pendants and floral motifs, are all more redolent of the Italianate than the Greek Revival.

Shortly after World War II, the house became the headquarters of American Legion Post #3 for decades, but by 2013 was badly deteriorating and its original cast iron fence was lost. Enter the 1857 Foundation, an organization of concerned local business professionals, who successfully partnered with the American Legion and the Mystics of Time Mardi Gras organization to fully refurbish the structure. The $2 million project features exquisite state-of-the-art wood window and plaster restoration, as well as an exact replica of the original cast iron fence.

NO CHANGE
Situated just south of Martin Luther King Jr. Avenue in the Campground Historic
District, this big circa-1910 house is a rare two-story example of residential architecture in one of the city’s oldest black neighborhoods. The Campground was so named
because it was a militia parade ground before the Civil War, a Confederate one during the war and a Union army bivouac afterwards. As the 20th century progressed, the open area was divided and sold off and hundreds of houses erected.

The house features unusual multi-pane windows, a louvered lunette in the front gable, and a remnant sawn balustrade on the second-story porch. It still stands, but barely. 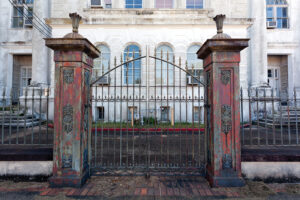 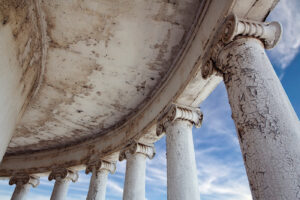 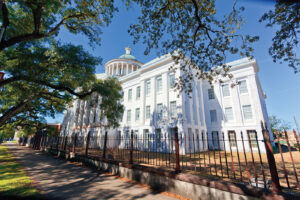 Barton Academy and the Yerby School

Back in 2013, the dedicated members of the Barton Foundation were hard at work raising awareness and money to save one of Mobile’s signature antebellum buildings. Its significant cast iron fence was rusty and broken, and the magnificent columned rotunda was rotting and shedding architectural elements. Now, thanks to the Foundation’s $15 million fund-raising campaign, Barton and the adjacent circa-1900 Yerby School triumphantly reopened last fall as the Barton Academy for Advanced World Studies. Even more inspiring than the spruced-up iron gates and gleaming rotunda are the joyous sounds of children’s voices during recess. Downtown is truly back. 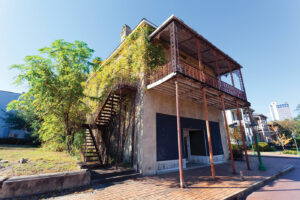 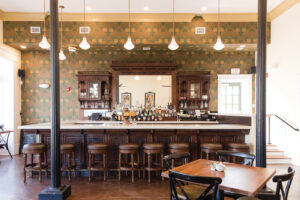 PRESERVED
Built in 1869 by a Corsican émigré named Charles Antomanchi, the two-story building served as a store (with an apartment above) for many years. Among its commercial incarnations were an upholstery shop, an oyster saloon, a grocery and, during Fort Condé’s first reclamation in the 1970s, an antiques store.

Ten years ago, this two-story 1869 Fort Condé building remained boarded up even as the father/son team of Lawrence and David Posner renovated the surrounding properties. The Posners never wavered in their efforts, however, and Antomanchi Store’s turn finally came. The building now shines as the newly opened Bistro St. Emanuel, a classy culinary complement to the Fort Condé Inn that sits catty-corner. The bistro exudes a convincing 1915 vibe with its retro paintings and wallpaper, and gorgeous quartz-topped bar.

PRESERVED
Designated by a wooden sign along its front eave, the charming Civil War-era Creole cottage long intrigued travelers on Old Shell Road. Philip Pfau built Chinaberry around 1862 and, during the 1950s, Anne Randolph Crichton, whose father founded the town of Crichton, lived here and tended a lovely garden. After years on the market, the building finally sold to the Burton Property Group, which spent three years restoring it. Also preserved are Anne Crichton’s personal landscaping and artistic flourishes. Today, the house, outbuilding and accompanying chapel are all beautifully rehabilitated and in no way overwhelmed by the lot’s artfully blended brick addition and asphalt parking area. The property is currently an office.

PRESERVED
Nestled amid the dunes and facing the Gulf of Mexico, the Isle Dauphine Club opened in 1957, and its concentric lines and elegant styling perfectly conjure the “Mad Men” era. Mobile architect Arch Winter, who was on the design team, described the place as “a precisely articulated system of circles” like one would find in “a fine Swiss watch.” Among the many delightful features are a spiral staircase, iron handrails, mahogany trim, a wonderful terrace with sweeping beach views, the old Tiki Bar’s exposed beams arranged in a wheel pattern on the circular ceiling, plate glass windows and doors, and a round swimming pool.

In 2013, this mid-20th-century modern building’s fate was uncertain. Today, that is no longer the case. Listed on the National Register of Historic Places in 2017, the club remains the centerpiece for an 18-hole gulf-front golf course. Among the site’s amenities are the usual stunning views, a swimming pool, and Pirates Bar and Grill, situated in the historic old tiki bar upstairs.

UNDER RENOVATION
In 1912, prominent Mobile architect George Rogers built this two-story frame building as a summer retreat for the Women’s Club of Mobile. It featured glorious double-decked wraparound porches facing the Bay, banks of full-height doors and massive hip roof dormers with casement windows. In a stiff breeze, standing inside this building must have felt like being in a wind tunnel, just what one desired in the days before air-conditioning.

The building has long served as the headquarters for American Legion Post 199, but it was badly clobbered by Hurricane Sally in 2020. Passersby can still see several blue tarps on the roof, but the future looks bright. The Legion received $100,000 recently from the state of Alabama and the City of Fairhope to help repair the damage and is in the midst of a broad fundraising campaign, with an overall goal of $3 million. Stay tuned.

Wreck of The Rachel

Fort Morgan Road at mile marker 6, on the beach

NO CHANGE.
When storms uncovered the ribbing of this historic shipwreck, fanciful speculation ran wild. Intrigued observers imagined everything from an old blockade-runner or a pirate ship to a rumrunner. The reality, as it turns out, is that this vessel was an early 20th-century lumber schooner, built on the Mississippi coast in 1918 and wrecked during an October hurricane in 1923. Fortunately, all the crew escaped, but the Rachel was a total loss, and a subsequent fire burned her to the keel.

So, six preserved out of my original 10 ain’t bad. And of the remaining four, two look hopeful (Chigahizola House and Fairhope’s American Legion) and only two remain obviously imperiled (Basil Street residence and the shipwreck). Which begs the question: What would I wish to see restored next? To fully cover that is another article, but in brief, Mobile Bay’s rich maritime history deserves celebration and protection. This includes not only the recently discovered Clotilda (placed on the National Register in 2021) but the wrecks of the blockade runner Ivanhoe in Gulf Shores, the schooner Chiquimula (owned during the 1920s by Jimmy Buffett’s grandfather) in Spanish Fort, the Rebel ironclads CSS Huntsville and CSS Tuscaloosa (placed on National Register 2022) in the Mobile River, and a host of unsung pirogues, lumber barges, tugboats, skiffs, and steamboats whose planking and ribbing sometimes peeks above the surface at low tide. These historic maritime artifacts are a priceless legacy and an important reminder that Mobile is, and always has been, a maritime city.

John S. Sledge is working on a book about Mobile and Havana’s centuries-long shared history.