As the Carnival season draws ever closer, a group of local enthusiasts gather to “Call on the Queen” and usher in her reign as monarch of the coming Mardi Gras. Roughly 10 weeks before Fat Tuesday, the Mobile Carnival Association’s board of directors, the Carnival Committee, family and close friends gather, usually at the home of the queen-to-be’s parents, to witness the official presentation of the scroll inviting the young lady to honor us as our monarch. While the coronation of the queen, held the Saturday before Fat Tuesday, is open to the general public, the party announcing her reign is by invitation only and is quite an exclusive affair. Everyone holds a glass of Champagne and toasts the lovely sovereign and her King Felix III.

Robby McClure, the proud father of two former queens, is well versed in all things Mardi Gras. He marvels at how this rich tradition is still alive in such modern times. “It’s so unusual that in 2017 we still have celebrations that are so classic. It is still seen as such an honor. These young ladies forever hold in their hearts how special this moment is.”

Mobilians hold our traditional cuisine as dear as we hold our Mardi Gras traditions, with tried-and-true recipes still a major part of the annual revelry. When the time comes for floats to roll down Government Street, Gulf oysters are in their prime and lump crab is as sweet as can be. Seafood has always played a central role in Mardi Gras entertaining, and that tradition continues into modern times with gusto.

The 2017 monarch, Queen Caroline Parish Meacham, received her invitation poolside at her parents’ home. Clifton Morrissette provided a sumptuous feast for those attending, with tuna tartar, sliced beef tenderloin and, of course, plenty of Gulf seafood. No one prepares heaping platters of fried oysters and shrimp like Clifton, and we persuaded him (after much convincing) to give us some tips on how to recreate the feast at home.

Longtime Mobile caterer extraordinaire (now retired) Martha Rutledge remembers serving her delicate Crab Strudel at the Calling on the Queen for Hill Luscher in 2005. Without too much fuss, this pastry, made with store-bought phyllo dough and jumbo lump crabmeat, offers a big wow factor.

Occasionally, a monarch has a member of the family so talented in the kitchen that there is no need to employ a caterer for the event. This was the case with Sarah Davis, grandmother to both Whiting Inge Mostellar (queen in 2004) and Alice Turner Frost (queen in 2006). Sarah chose to serve several seafood dishes for the occasions, including her Shrimp Salsa. This recipe works just as well on the wharf as it does at a swanky affair.

The Visitation, as the regal affair is sometimes known, officially kicks off the queen’s reign and marks the moment that the Carnival fun begins. Up until this point, taking on the honor and responsibility of Queen of Mardi Gras involves planning, preparation, shopping, bills, arrangements and probably a few mother-daughter disagreements. From this moment on, however, the queen can have fun and soak in the adoration of her “subjects” and some plates of amazing seafood. 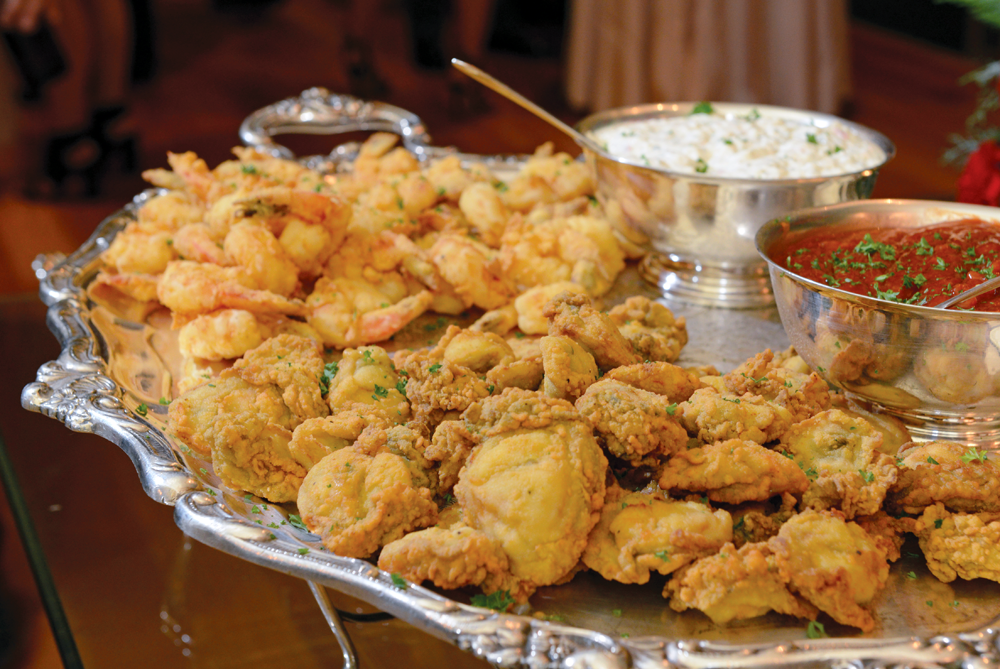 1. Drain oysters. Place oysters in a large bowl and add buttermilk. Place in refrigerator and allow to soak at least 5 minutes and up to 30 minutes.
2. Meanwhile, heat a large heavy-bottomed pot or fryer with plain vegetable oil (not peanut oil) to 325 degrees. Do not allow oil to get above 350 degrees.
3. Pour the Dixie Lily Seafood Breader into a shallow baking dish. Remove seafood from milk and drop into the breader. Toss to coat and immediately place oysters into the hot oil.
4. Fry until golden brown, 3 – 5 minutes, then drain briefly on paper towels.
5. Serve immediately with cocktail, remoulade or tartar sauce for dipping. Serves 6 – 8.

1. Slice Roma tomatoes in very thin round slices. Place on paper towels. Sprinkle with salt and let drain for at least an hour.
2. Cut bread into rounds with 1 ½ inch cookie cutter. You should be able to get 5 rounds out of each slice of bread.
3. Combine next 6 ingredients in a small bowl to make the sauce. Add the crumbled bacon and stir to combine.
4. Cover each bread round with sauce. Top with a slice of tomato and serve. 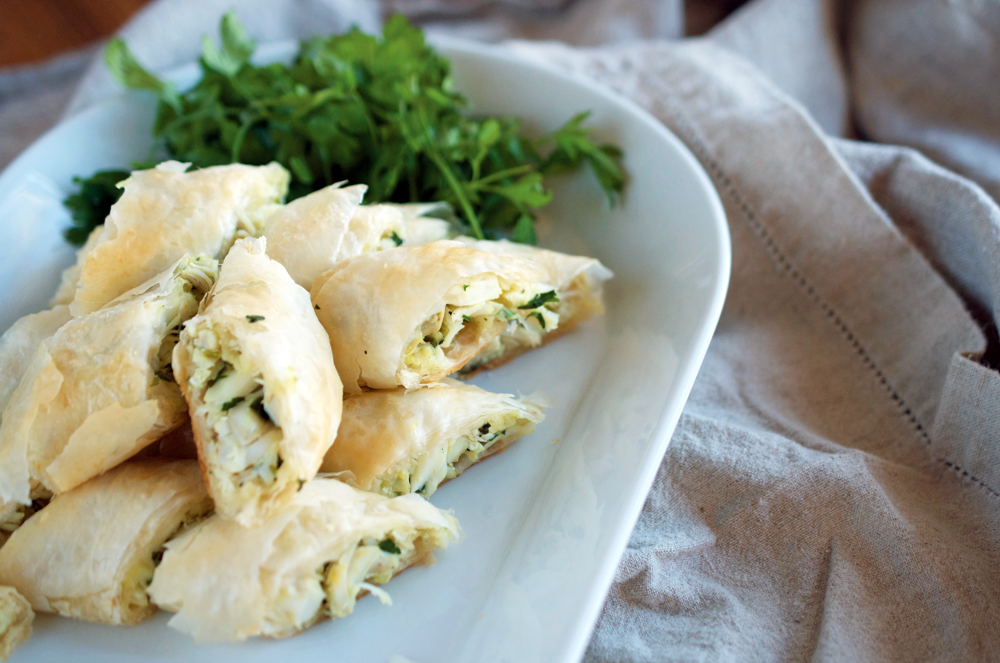 Martha served this Crab Strudel at the 2005 Calling on the Queen for Hill Luscher. This impressive recipe is deceptively easy and works great as an appetizer, but it can also be cut into larger slices and served as a luncheon entree with a green salad on the side.

1. Preheat oven to 400 degrees.
2. Heat 2 tablespoons butter in medium saucepan. Add the scallions and cook over medium heat until soft, about 5 minutes. Add the curry powder.
3. Drain the crabmeat and pick through for any remaining shell pieces. Shred crabmeat in a bowl and add parsley, lime juice, salt and pepper. Add the seasoned crabmeat to the scallion mixture.
4. Melt remaining butter in a small saucepan. Unfold 1 sheet of phyllo dough on a clean, dry workspace. Brush with melted butter, then sprinkle with a small amount of the breadcrumbs. Repeat the process by laying a second sheet of phyllo over the first sheet. Brush with melted butter and sprinkle with breadcrumbs until 5 sheets have been used.
5. Spoon a 1-inch wide row of the crab mixture along one long edge of the dough. Roll up dough like a jelly roll. Brush the top with melted butter and set aside. Repeat the same process using all the phyllo dough and crab filling.
6. Cover a sheet pan with parchment paper. Place the strudels on the pan and score diagonally into 1 1/2-inch pieces.
7. Bake for 12 minutes or until the top is light brown. Slice along the score lines and serve. Makes 4 strudels/Serves 10 – 12.

Sarah prepared hors d’oeuvres for the Calling on the Queen parties for Whiting Inge Mostellar and Alice Turner Frost, both her granddaughters and both models in this month’s Mardi Gras fashion.

1. Combine shrimp, half of the green onions, half of the jalapeños, juice of 1 lime and half of the cilantro. Marinate at least 1 hour.
2. In a bowl, combine cocktail sauce, ketchup and Creole seasoning, and add to shrimp mixture. Refrigerate.
3. Meanwhile, combine chopped tomatoes, salt to taste, juice of 1 lime and avocados. Add remaining cilantro, jalapeño, green onions and more Creole seasoning to taste, if desired. Toss with shrimp mixture at the last minute. Keep chilled until serving.
4. Serve cold with Fritos Scoops or tortilla chips. Serves 10 – 12.

1. Cover one side of beef tenderloin in lemon pepper seasoning and hickory salt. Let sit for 30 minutes. Turn meat and season other side, then let sit another 30 minutes.
2. Mix olive oil, ½ cup Worcestershire, soy and garlic. Pour over beef and turn meat periodically until placing in refrigerator over night.
3. Before cooking, remove beef from refrigerator and let come to room temperature.
4. Remove beef from marinade and pat dry.
5. Heat gas grill to 500 degrees.
6. Make a basting sauce by mixing butter, 1 tablespoon Worcestershire, lemon juice and brown sugar.
7. Baste meat with basting sauce and place on grill. Cook on high for 5 minutes on each side. Turn off one side of grill and place seared meat on the side of grill without heat. Baste again. Pull cover down on grill and leave meat unattended for 15-20 minutes, depending on weight of tenderloin.
8. Baste meat and remove from grill and cover meat tightly with heavy duty aluminum foil. Best if kept wrapped in foil for 1-2 hours.
9. Slice meat thinly and serve. Meat will be medium rare to rare all the way through.