My first impulse upon finishing Edward O. Wilson and Alex Harris’ delightful new book, “Why We Are Here: Mobile and the Spirit of a Southern City, ” was to hurry over to Wintzell’s on Dauphin for a bowl of gumbo. Other readers will likely experience different urges – to fish off a Point Clear wharf, for example, or take in a pitcher plant bog or Blakeley State Park, or 5 Rivers Delta Resource Center, or the History Museum of Mobile. Any one of these activities is a perfectly understandable response to this heartfelt celebration of our distinctive environs and culture.

At 83 years old, Wilson is a heavyweight in biological circles. A professor emeritus at Harvard, he invented the field of sociobiology and coined terms like “biophilia” (the love of living things) and “culturgen” (the cultural homologue of a gene). He is the author of numerous influential books and the winner of a raft of distinguished awards, including a National Medal of Science and two Pulitzer Prizes for nonfiction (for “On Human Nature” and “The Ants”). In recent years, he has become an eloquent champion of the Mobile River Delta, bringing in high-powered scientists to sample its wonders and teaching the general public about its fragile delicacy and astonishing diversity.

This passion for our swampy terrain is fueled by the fact that Wilson is himself a Mobilian. Though not conceived under the azalea bush – he was born in Birmingham in 1929 – he spent his childhood and formative years in the Port City, and he freely acknowledges the influence the area’s natural and human history have had on him. And while Wilson has passed his consequential career away from the Gulf Coast, he has always felt the tug of home ground. “I am an Alabamian who, ” he declares in the introduction to this book, “like tens of thousands of other Alabamians, went up north after World War II to work. Now, at this time in my life and career, it is natural to return to where my heart has always lived, close to the memory of Mobile’s landscapes and my people.”

“Why We Are Here” presents Wilson’s introspective meditation on his local history, with accompanying color photographs, captions, and an eloquent short essay by Harris, who teaches at Duke University. Taken in toto, the book is these two men’s attempt to, in Wilson’s words, “cut more deeply than a traditional documentary description about a place.” They want to capture “its spirit, ” and in this they succeed. For more images, scroll to the end of the story. 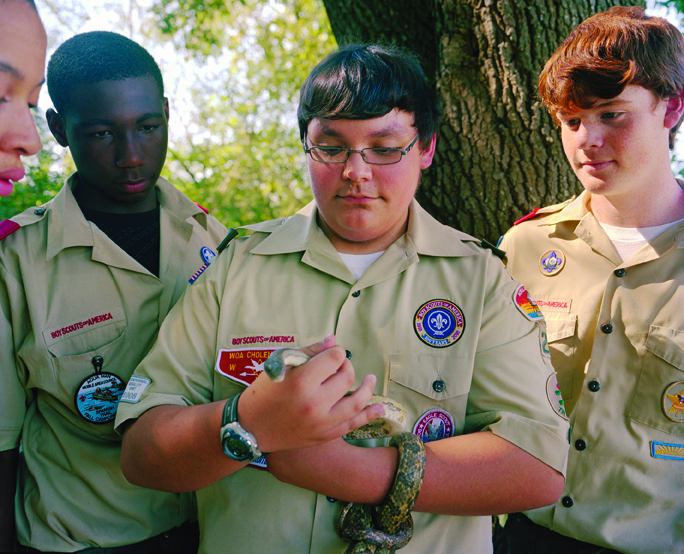 Wilson writes well, and his remini-scences are completely charming. He lived in a two-story house on Charleston Street with his extended family and freely rambled downtown and into the surrounding woodlands and swamps. Even as a child he gloried in the teeming biodiversity of south Alabama, experienced from the “squashed space, dirt-floored and cobweb hung” underside of the Charleston Street house to the piney bluffs at Spanish Fort and Blakeley. He slurped his first oyster at age 4 – “it tasted terrible” – and at 14, “one hundred pounds, and with a still squeaky voice, ” lectured on snakes (long a favorite topic) at Camp Pushmataha for Boy Scouts in Citronelle.

Like many children in history-haunted Mobile, Wilson was well aware of his family antecedents. Among these was William Christopher Wilson, a great-grandfather better known as “Black Bill, ” a skilled bar pilot who flourished during the mid-19th century. When Adm. Farragut asked him to guide the federal fleet into Mobile Bay, promising money, a job up North and even a Congressional Medal of Honor, Black Bill growled, “I’ll see the whole Yankee fleet in hell before I betray my country.” His subsequent jail sentence was extended a year for “spitting on an officer, ” or so the tale “cheerfully passed down in the family” had it. Wilson revels in his colorful heritage and makes no apology for it. He is less proud of his racist beliefs as a youth, but puts them in their historical context and carefully traces his path to enlightenment. The general history backgrounding these personal reflections is entertaining, but at times loose. Several dates and facts are off – the French did not introduce Mobile’s intricate ironwork, for example – but this is not a major detriment in such a work. 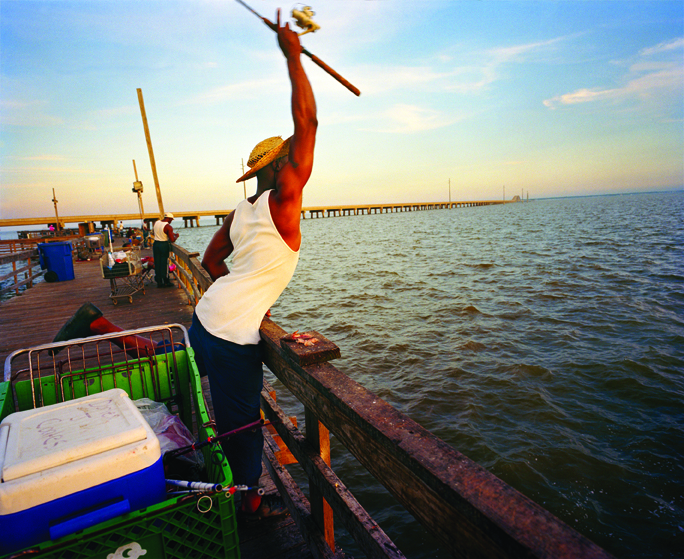 ABOVE In a scene as old as the coast, Ben Davis tries his luck at Cedar Point Pier, in south Mobile County.

Harris’ stunning photographs present many familiar subjects, including area personalities; favored activities, like football and Mardi Gras balls; and natural landscapes. Among the local people is late Spring Hill raconteur Robert Hunter, pictured in front of his George Rogers-designed Old Shell Road house. Other memorable images include a mint julep party on the Oakleigh mansion grounds; the Murphy High Panther football team in practice; Orange Beach condos towering over scrub; and the Choctaw Bluff Hunting Club, its exterior wall decorated by dozens of deer antlers. Several photographs focus on the area’s ethnic diversity – a black family cemetery, a young Asian couple outside their door – and many more on the natural delights to be found on the city’s very doorstep.

The Mobile Bay area is a distinctive and special place, as anyone who lives here knows. E. O. Wilson, world-renowned scientist and author; and Alex Harris, appreciative outsider with a gifted eye, get this in their bones, and in “Why We Are Here” proclaim it from the rooftops.

John S. Sledge is the author of “The Pillared City: Greek Revival Mobile.”