Doug Kerr, owner of Fairhope’s Dragonfly Foodbar, is a self-described “foodsmith.” He takes great pride in his unique, innovative cuisine.

“Foodsmith just sounds cooler than chef, ” he says. “I know plenty of chefs and just one foodsmith.”

At Dragonfly, Kerr says he is forging creative, flavorful food from an array of cultures. It’s akin to fun, fusion party food — small plates, tacos a la carte and big bowls of noodles — plus house-made gelato for dessert. “The recipes are all mine, not from cookbooks, not from TV or the Internet, ” he says.

Kerr has also made the most of a tiny, challenging space. His eatery straddles both sides of another small business along downtown’s ultrapopular main strip. One side is an inside setting, featuring a stunning wood bar with additional countertop seating wrapping around two walls. The other portion of the eatery is a sliver of a courtyard with picnic and patio seating.

Dragonfly feels casual, yet cutting edge. Kerr says the restaurant, opened in September, is “not stuffy or uppity.” The menu changes slightly each month, and there are daily specials. Favorites include the succulent braised pork taco, below, the crispy oysters with blue cheese French toast, and the splendidly spicy green curry shrimp and udon noodle bowl. If you’re feeling adventurous, try the lobster corn dogs served with miso ketchup and Creole-style mustard.

A trio of salads and a whole host of generous bowls are well-spiced, brimming with inspired ingredients. Sides include the popular tempura turnip fries, creamed garlic spinach and chili soy edamame. Almost everything on the menu is under $10, making it easy to mix and match menu items. There is also a full range of liquor, beer and wine.

Tempura Turnip Fries
Light and crisp, these delightfully different turnip “fries” are slightly sweet. An intriguing alternative to the traditional, served with a snappy dipping sauce.

Seared Tuna Taco
Pepper-crusted seared sashimi tuna is scattered with edamame salsa, all drizzled with wasabi aioli atop a tortilla. 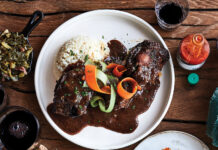 10 Local Dishes to Try This Month 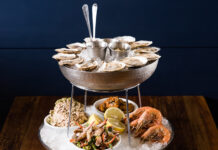