Stop in the name of the law! And most of us do because we respect our legal system. Plus, orange jump suits are unflattering. But some laws are guilty of wacko in the first degree. For example, there are rules on Mobile’s books that make high heels a public menace, confetti a weapon and roosters contraband. So let’s open the 10-pound chronicle that is Mobile’s Municipal Code, a massive tome governing our city, the guidelines defining right from wrong, the document stating we can’t carry a chicken upside down.

That’s right, transporting or selling live chickens in Mobile with the bird bottom side up is a cock-a-doodle-don’t. If you are doing so, stop now, or risk running a-fowl of the law. And that’s not the only poultry penalty. Legally, Mobilians are allowed to raise up to 25 backyard hens, but there is zero tolerance for rooster raising –
it’s illegal.

The law forbids anyone riding an old horse. But it does not specify what age a horse is considered old. It has to act old. Heck, I act old! Are they going to ban me? And if the steed is unattended and untied, it is considered a “horse at large, ” a fugitive. 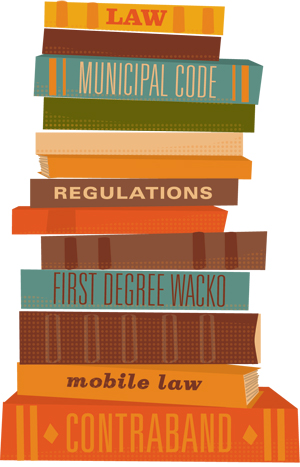 Heaven help you if you are caught carrying the concealed weapon of confetti. In the city that created Mardi Gras, confetti is almost a controlled substance, which “cannot be sold, kept, stored, given away, or handled.”

In addition, our town also deems “funk” or stink balls, weapons of mass destruction. A funk ball, as defined by Mobile’s Municipal Code, is “an item intently used to create disagreeable odors to the great discomfort of the persons coming in contact therewith.” We are a funk-free city.

It is against the law to fire a missile at a police officer. Not only does it distract lawmen, forced to seek shelter while yelling “incoming, ” it also makes them very mad.

Other Crimes of Note

It is illegal to shower in Bienville Square’s fountain. Nor can you wade in Mobile Bay or the Mobile River – naked. Darn, there goes the plans for this weekend.

One cannot hire a taxi for the purpose of robbing a bank. Use your own car.

You cannot legally lay in a prone position on Government Street. But you can lawfully lay in Airport Boulevard; it’s not mentioned in the code.

No person shall spit a fruit skin while in a public elevator. I’d say it’s about time.

It is illegal to dance in a hospital. The law was established to maintain peace and quiet for the infirm but also prevents yanking the IV from your arm while doing the twist.

Anyone caught carrying away a neighbor’s door is subject to arrest. Police will search door to door.

You can’t recklessly drive “beasts of burden” in Magnolia Cemetery. Good call. I remember the last funeral I attended there; an unruly team of oxen just ruined it.

Periodically, our city officials clean the books: modifying, clarifying and removing laws. Some regulations just become obsolete over time, like an ordinance forbidding possession of milk bottles other than your own. And then there’s the infamous high-heeled shoe ban.

We had a law proclaiming women could not wear high-heeled shoes in Mobile without a permit. Decades ago, ladies received foot and ankle injuries from catching their spiked stilettos in the city’s uneven streets. Fearing lawsuits, local government banned high heels, unless the wearer obtained a city hall permit.

And no matter how pretty a local lass appeared, in heels or otherwise, you didn’t dare whistle at her. It was against the law to “howl, ” or whistle at a female. The decree was implemented during World War II when Downtown was full of military men. Combine young male soldiers with attractive Southern belles, and do the math.

Our final and oldest law listed here dates back to 1870. Mobile’s City Council granted permission for the mayor to select a “secret police force, ” seven elite men chosen from city law enforcement ranks. The clandestine justice servers are still shrouded in mystery. What did the law allow them to do? Who do you think catches our roosters?