Chef Will Sams always dreamed of owning a restaurant. He started in a deli, working his way up through some of the most esteemed dining establishments along the Gulf Coast and attending The Culinary Institute of America in New York. The Gulfport, Mississippi native knew his vision for an upscale coastal menu would find a niche, so when the space that used to house R Bistro & Pastry became available in downtown Fairhope, he and his wife Erin Bell acquired it. After an extensive 11-month renovation, they opened Pearl, a seafood and raw bar.

“We are straight out of the Gulf,” says Sams, who also serves as executive chef, as he carries out a two-tiered seafood tower heaped with fresh oysters, gulf shrimp, crab claws and other delicacies. The pickled mussels, though not local to the region, are also a point of pride for him and he loves to introduce patrons to the dish. “People are always pleasantly surprised. It’s not something that they are as familiar with, but when people try it, they love it.”

Pearl is a family affair, with Erin, a native of the Gulf Coast as well, serving as general manager. The décor, realized by Studio Marché, is an interpretation of the couple’s personal style. The interior has a coastal-contemporary feel with nautical elements featuring deep blues, a light wood ceiling, and custom wallpaper designed to fit the Gulf Coast vibe. Brass elements and salmon-colored accents complement the modern aesthetic. The walls are lined with local art, much of it purveyed by Lyons Share in Fairhope. And the cozy, yet stylish, dining room is an inspired setting for a date night or an intimate dinner with family or friends.

Pearl’s menu changes seasonally. All sauces and pickled items on the menu are made from scratch. Most of their fish and meat are from local suppliers, and ingredients are locally sourced whenever possible. In keeping with their predecessor’s legacy, the restaurant offers a large wine list paired with an inventive cocktail menu to go along with its dishes.

The community has already embraced Pearl’s fresh flavors and contemporary menu. Each evening, diners pour in and can be found enjoying multicourse dinners, chatting and sipping on cocktails and wine. Despite the fact that Pearl doesn’t take reservations, it’s worth the effort to snag a table in this tiny jewel box of a restaurant. 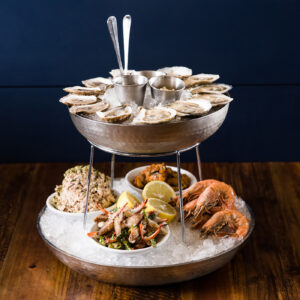 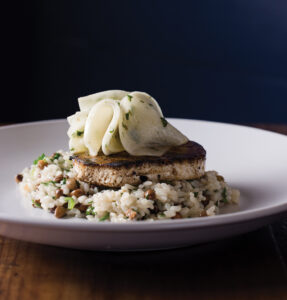 Above left: The Seafood Tower, Above right: Seared Swordfish

Seafood Tower
This double-decker delight is a great way to taste it all! Creative renditions of smoked tuna dip, marinated crab claws and pickled mussels are paired with Gulf favorites: raw oysters and giant peel-and-eat shrimp.

Baked Manchego
You will be transported to Spain when this sizzling hot skillet arrives at the table. This decadent dish features buttery Manchego cheese, chorizo, salsa verde,
and arugula accompanied
by warm, toasted bread.

Seared Swordfish
Traditional Southern cuisine with a modern twist! Flavorful swordfish with a crispy crust and a tender center is served over Hoppin’ John. The pickled turnips elegantly layered on the fish add a vinegary tang that complements the dish.

Roasted Oysters
These have a little bit of a kick! Five jumbo Gulf oysters are roasted in a chili garlic butter sauce. Sop your toasted bread in the sauce to get every last bite.

Fried Oyster BLT
This sandwich is packed with juicy cornmeal-battered oysters that topple out the sides of the buttery toast. Then add crispy bacon, ripe tomatoes, fresh lettuce and homemade tartar sauce. Don’t mess with the classics.